‘Inglourious Basterds’ came out 10 years ago. Has its legacy changed? 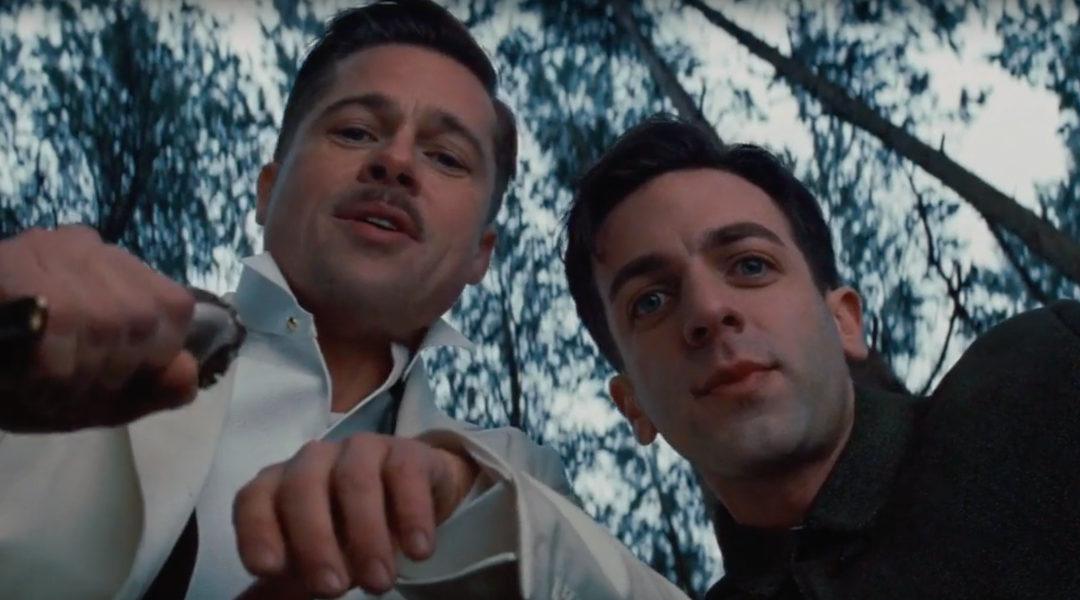 (JTA) — Quentin Tarantino’s “Inglourious Basterds,” which turns 10 next week, is unlike any other movie set during the Holocaust.

It follows a group of American Jewish soldiers — led by a non-Jewish one, played by a deadpan Brad Pitt — who hunt down and kill Nazis in typically brutal Tarantino fashion (scalping and baseball bats are involved). With the help of British intelligence, the “basterds” eventually hatch a plan to kill Hitler and a bunch of his top associates in 1944. Spoiler alert: the plan succeeds in the film’s fictional universe.

Upon its release, the revisionist story unsurprisingly provoked a stream of debate and criticism. Some Jews, especially those involved in the film, like actor Eli Roth and producer Lawrence Bender, found the revenge fantasy empowering and satisfying.

Cultural critic Daniel Mendelsohn argued the flip side of that point: that by having Jewish characters be brutally violent, no matter to whom, Tarantino essentially turned them into Nazis. Mendelsohn, an editor-at-large of the New York Review of Books, has a personal stake in the debate — he wrote “The Lost,” a memoir about his search for the story of his relatives who were killed in the Holocaust.

It’s interesting to imagine what might have happened had “Inglourious Basterds” come out in 2019 rather than 2009. Recent debates have raged over whether the term “concentration camp” can be used in certain modern contexts. Amid the rise in anti-Semitism across the country and world, people have argued over whether it’s appropriate to punch neo-Nazis. Even depictions of graphic violence in movies are being reckoned with — see Universal Pictures postponing the release of a film, “The Hunt,” after a spate of mass shootings.

Mendelsohn talked with the Jewish Telegraphic Agency on the 10th anniversary of the film about its cinematic value in the contemporary era.

JTA: I was 17 in 2009, and “Inglourious Basterds” was an event for teenagers — especially Jewish ones who were kind of estranged from their Jewish identities. The movie elevated its Jewish characters to badass, near-superhero heights in popular culture. I laughed at and revered the “Bear Jew” character, who mashes Nazis’ heads to a pulp with a baseball bat.

These days, though, the social and political climate is obviously much more toxic, and we are all more attuned to the effects that violence in pop culture can have. How do you situate the film now? Have your thoughts changed at all?

Mendelsohn: I’m all for badass Jews, but I don’t think the way to be badass is to smash Nazis in the head with baseball bats. The ethical point that I was trying to make in that piece is that the appropriate way for Jews to fight back against real Nazis, or neo-Nazis, is not to imitate their tactics.

So I would resist the idea that this movie is more appealing now that neo-Nazism has risen in this country and, as we know, a proto-fascist politics is on the rise around the world … People should be watching “Shoah,” not Quentin Tarantino, if they want to understand what the ramifications of the current political situation could be.

Do you feel personally threatened as a Jew these days?

I wrote this book about the Holocaust and it’s a thing that I think about often. The blatancy of this white supremacist, anti-Semitic, anti-immigrant — all of this stuff is, in my lifetime as an American citizen, fairly new. It’s not like one didn’t know it was out there, but the presence, the boldness of it, is new.

I feel much more vulnerable … like when I’m giving my name when making hotel reservations in distant states. I for the first time wonder what they’re thinking — are they thinking, “Is this a Jewish name?” It never crossed my mind 25 years ago that some telephonic clerk would have a thought about my being Jewish. And now it does … and that’s disturbing to me. 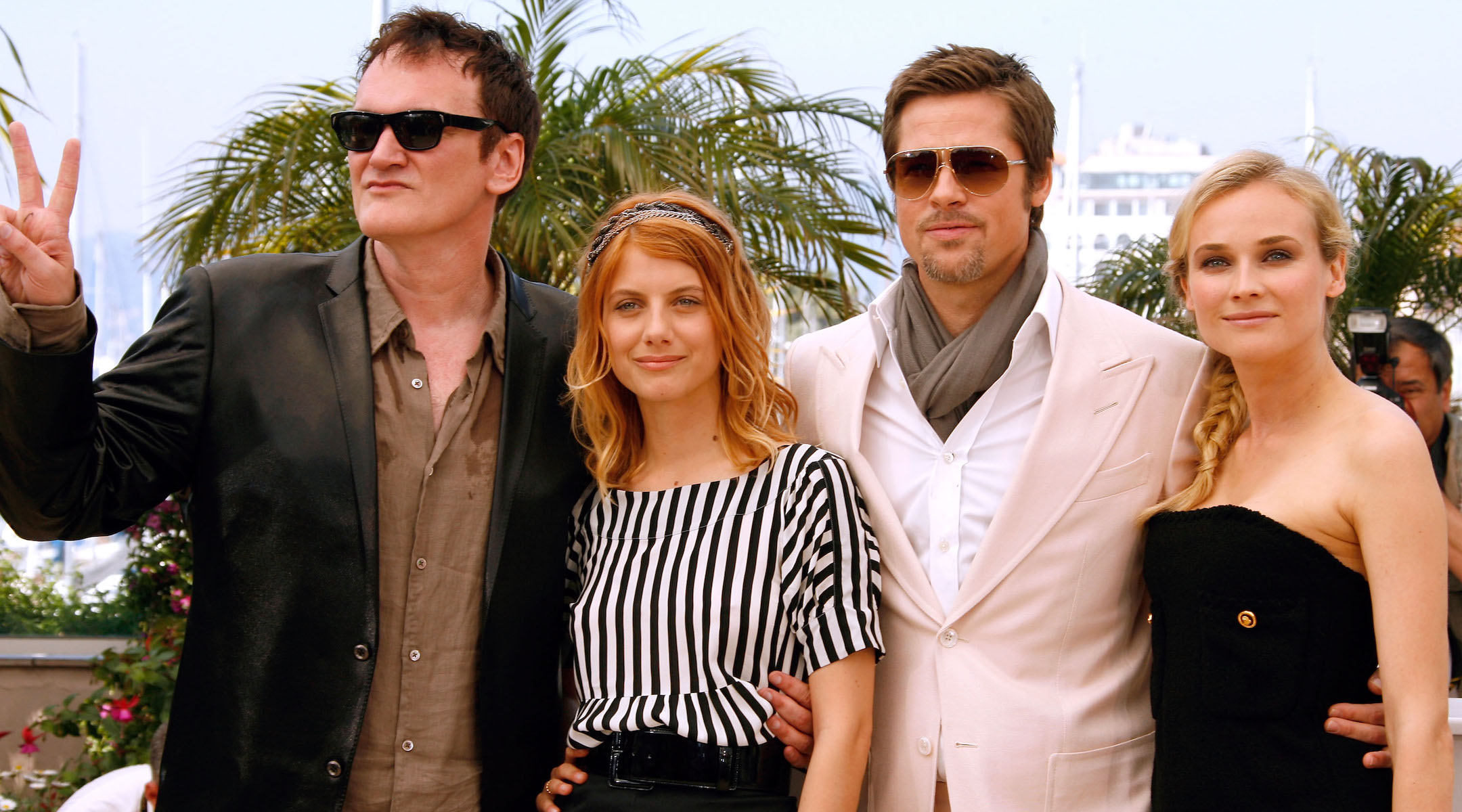 From left to right: Director Quentin Tarantino and actors Mélanie Laurent, Brad Pitt and Diane Kruger at the Cannes Film Festival in France, May 20, 2009. The film performed very well at the box office. (Jeff Vespa/WireImage/Getty Images)

You were far from the only critic, Jewish or non-, to take issue with the film. Is the Holocaust just off limits when it comes to revisionist history? Or was Tarantino too bold in his revisionism? Is there a middle ground?

When you started talking about the 10th anniversary of the Tarantino film and how things have changed, what I thought you were going to talk about was this: about the way that facts, that history, has become vulnerable in the past decade because of all the things we know about — the ability, especially in internet culture, to bend, invent.

I would be careful in terms of making this point about his film — movies are movies. I think we’re sensitive about the representation of the Holocaust because, as it were, it just happened, basically. There are people alive who were part of this, so it seems kind of brazen to take great liberties. Nobody cares how the murder of Julius Caesar is handled in a movie because it’s 2,000 years ago and nobody cares anymore.

As we know, [Tarantino] has undertaken other historical subjects, and it gets us into an interesting conversation for which there is perhaps no answer — the responsibility of an artist toward a real historical event, or whether there is any.

Every time you make a film about history, whatever your intentions are … you get yourself into a sticky situation. Because at the end of the day, a movie has to be entertaining, and it has to have a narrative structure, and history is neither entertaining — it’s just what happened — neither does it have a satisfying structure. And those things will forever be at odds to some extent … but it’s the power of popular movies to make one think a certain way that I think one has to think about.

One of the first lines of your article argues that “Inglourious Basterds” is only “superficially about Jews.” Did you mean that there weren’t any token markers of Jewish identity that we’re used to seeing in movies, like a prayer scene or a yarmulke? And what are the ramifications of that?

What is the right way to represent Jews? I went through this back in the ’90s writing about gay culture all the time back then. Every time there was a gay character on a TV series, half your friends were hysterical because it was too straight and the other half were hysterical because it wasn’t straight enough. The fact is, there is no standard Jew that one could represent. The idea is so preposterous.

There’s a certain kind of World War II movie where a band of scruffy guys go on a secret mission and they have license to do whatever they want. That’s his world. I don’t know if he ever read a history book; it doesn’t matter. I mean, maybe he did, but what’s important to him, and this is not an illegitimate thing for a director, is how history is represented in movies.

I myself, as you can hear, I’m torn between two poles. On the one hand, you have to acknowledge the freedom of an artist to do whatever they want. On the other hand, it’s naive to think that popular cinema doesn’t have real-world impact. … I’m not going to tell a director how to make a movie that features the Holocaust, but I kind of wish they would do it in a certain way. [laughs]

When I was researching my Holocaust book, I heard stories that made me feel violently vengeful. But how you handle that is the ultimate test, I guess.