In Moldova, Ukrainian Jewish refugees anxiously wait out the war in synagogues and Jewish centers 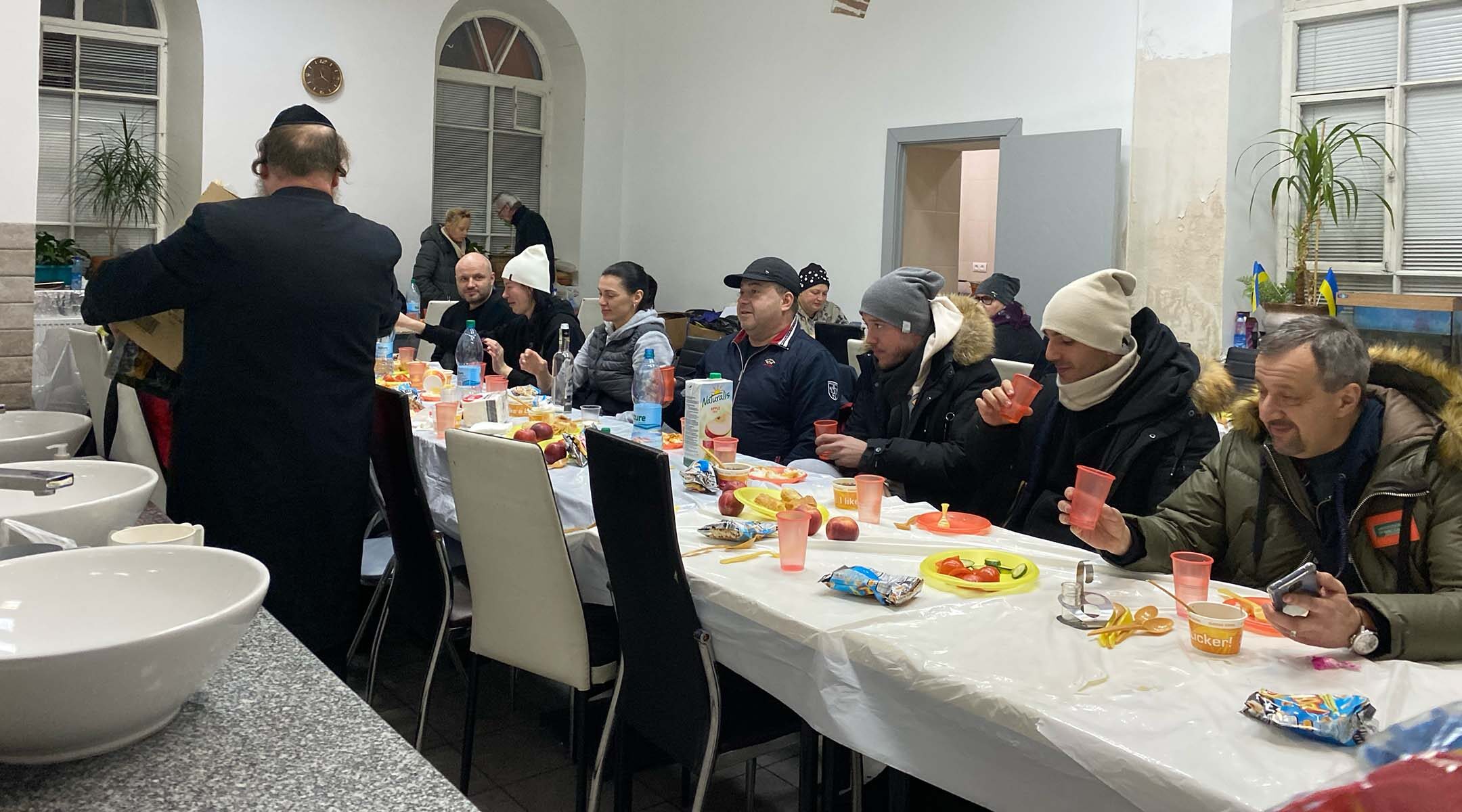 CHISINAU, Moldova (JTA) — A mother cradles her child. An old man clutches a large plastic bag into which he has crammed all the belongings he could fit. The children who are old enough to understand what is happening are silent, those who are not are tugging gently at their grandmothers’ coats.

This is one scene of the Jewish exodus from Ukraine.

The cramped corridors and dirty stairwells of the few synagogues and community centers owned by the Jewish community in Ukraine’s neighbor Moldova have been quiet this week — but not because they are empty. Women are sitting stunned as they process for the first time the idea that they have become refugees. Teenagers are texting their fathers and brothers for news from the frontline.

In the days since Russia invaded Ukraine, over one million people have become refugees, according to the United Nations High Commissioner for Refugees. Around 100,000 have already ended up in Moldova, Europe’s poorest country, which borders Ukraine to the south.

Among those leaving Ukraine are thousands of Jews, and many have sought the help of the Jewish community in Moldova. Local Jews say that they have seen thousands of Ukrainian Jews pass through seeking help, shelter and advice as they plan their next moves. Many thousands more are expected, as around 15,000 Ukrainians stream in each day.

On Thursday, Katerina Starchenko, 70, sat in the corner of a study room of one of the capital Chisinau’s four main synagogues — the Sinagoga Sticlarilor, or Glassmakers’ Synagogue, which was erected in the 19th century and is now run by the Chabad-Lubavitch Hasidic movement. It took two days for her to reach Moldova from her home in the industrial city of Kryvyi Rih, in central Ukraine.

“It was frightening,” she said. “The road wasn’t easy and we were constantly having to stop at checkpoints on the route where there were men with guns. It made me very nervous.”

Starchenko was driven by her 33-year-old son, along with his wife and daughter. Ukraine has banned men of fighting age (18-60) from leaving the country, so he left them at the Moldovan border and turned around. “He has gone back to fight,” she said. 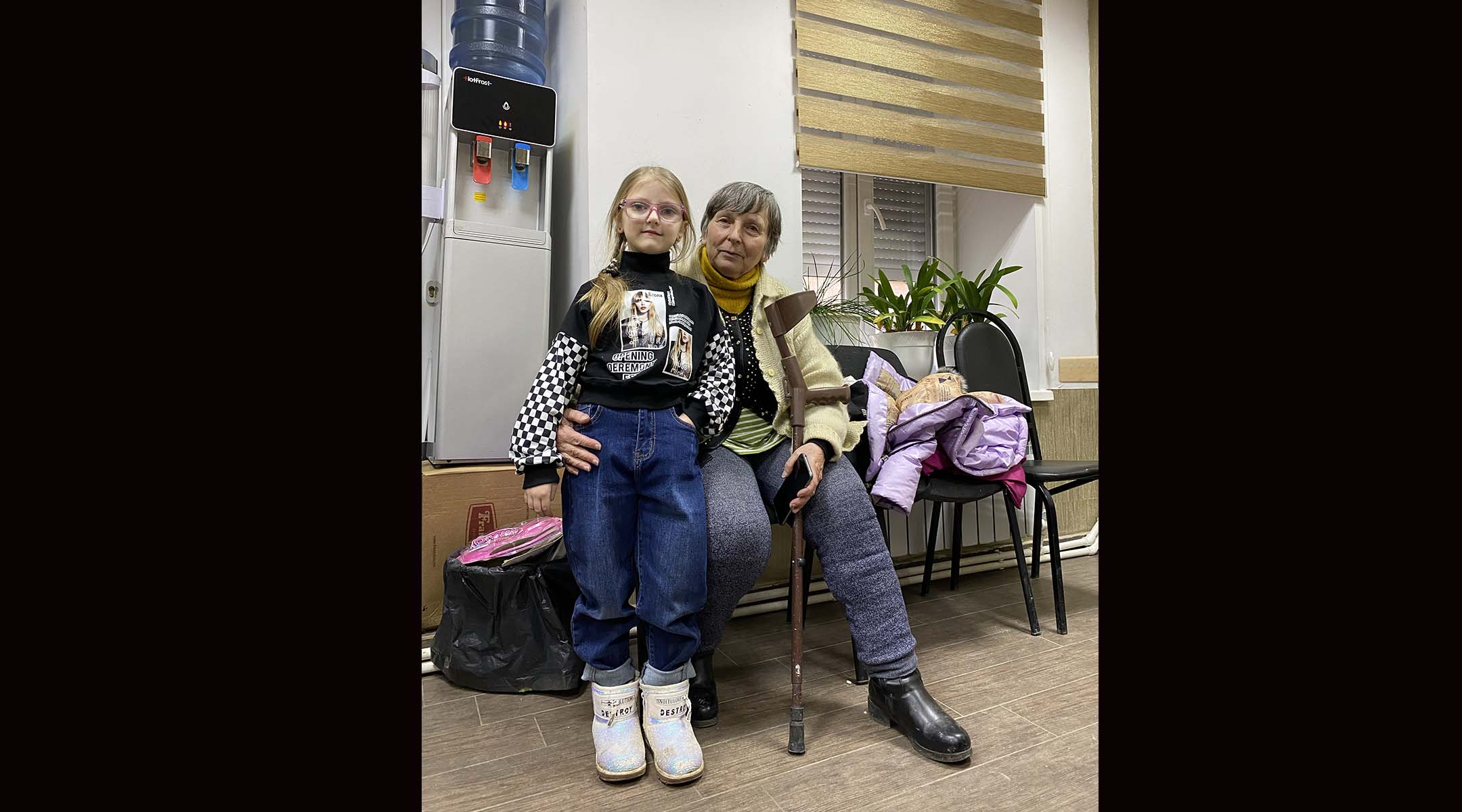 Katerina Starchenko, 70, and her granddaughter Milena, 7, seen in the Sinagoga Sticlarilor, or Glassmakers’ Synagogue, in Chisinau, Moldova, March 3, 2022. (Jacob Judah)

Like many Ukrainians, she wasn’t prepared for war. It seemed ridiculous to think that Russia would decide to invade Ukraine, she said.

“I am 70 years old already,” she said, “but my children and grandchildren are young. They don’t deserve this.”

Nearby is a backpack and a trolley decorated with sunflowers into which she has packed a few clothes and mementoes. She is going to pay 150 euros each for her daughter-in-law, granddaughter, and herself to get by car to Italy, where she has a daughter.

“I don’t think that I will be going home anytime soon,” she said as she cupped her hand to her cheek.

Moldova, not a member of NATO nor the European Union, is the most fragile of Ukraine’s western neighbors, with an under-equipped healthcare system that was battered by the COVID-19 pandemic. But since the fighting started in Ukraine, Moldovan society has mobilized to support the influx of Ukrainians.

​​”By now we can say that thousands have come through here,” said Lea Gotsel, 23, the wife of one of the Sinagoga Sticlarilor rabbis, as she stood surrounded by refugees eating an afternoon meal of couscous and leftover Passover matzah.

The city’s four synagogues are run by various Orthodox groups who often do not have full-time rabbis; the organizations send in rabbis from the United States and Israel, who often stay for several years at a time, serving the community of anywhere from 5,000 to 20,000, depending on how one counts people with Jewish heritage. Far fewer than 5,000 attend synagogue on a regular basis.

Most Ukrainians who arrive in Moldova are unlikely to stay. It is estimated that some 40,000 have already left for neighboring Romania from where they will have begun to disperse across Europe.

“Most of those who have come here are going on further to Romania, to Germany, to Israel, to Poland,” said Gotsel, “but there are some who are staying longer and hoping that they will be able to go home soon.”

In the adjoining room, her husband paced furiously as he stared into his phone with furrowed brows. He was trying to help a panicking young woman join her mother in Israel, but she had left all her documents in Ukraine.

“Tell your mother to send you a picture of her Israeli passport,” he said.

Virtually all the people that have come through the doors of the synagogue, in a backstreet of Chisinau, are Jewish.

“Everyone goes to where they feel they will receive help first, and most Jews feel that that place is a synagogue,” said Gotsel. “We are trying to find them places to stay. We try and find money for people who don’t have any. We try and give them food and advice.”

The previous night, the synagogue was told to expect a bus load of orphans who had been evacuated from Odessa.

“We organized something so they would have a nice place to come,” Gotsel said. “We tried to create something normal for them, so one of the rabbis went to the wedding hall and told them that there was an orphanage coming and asked if they could set up a place where we could bring them food.” 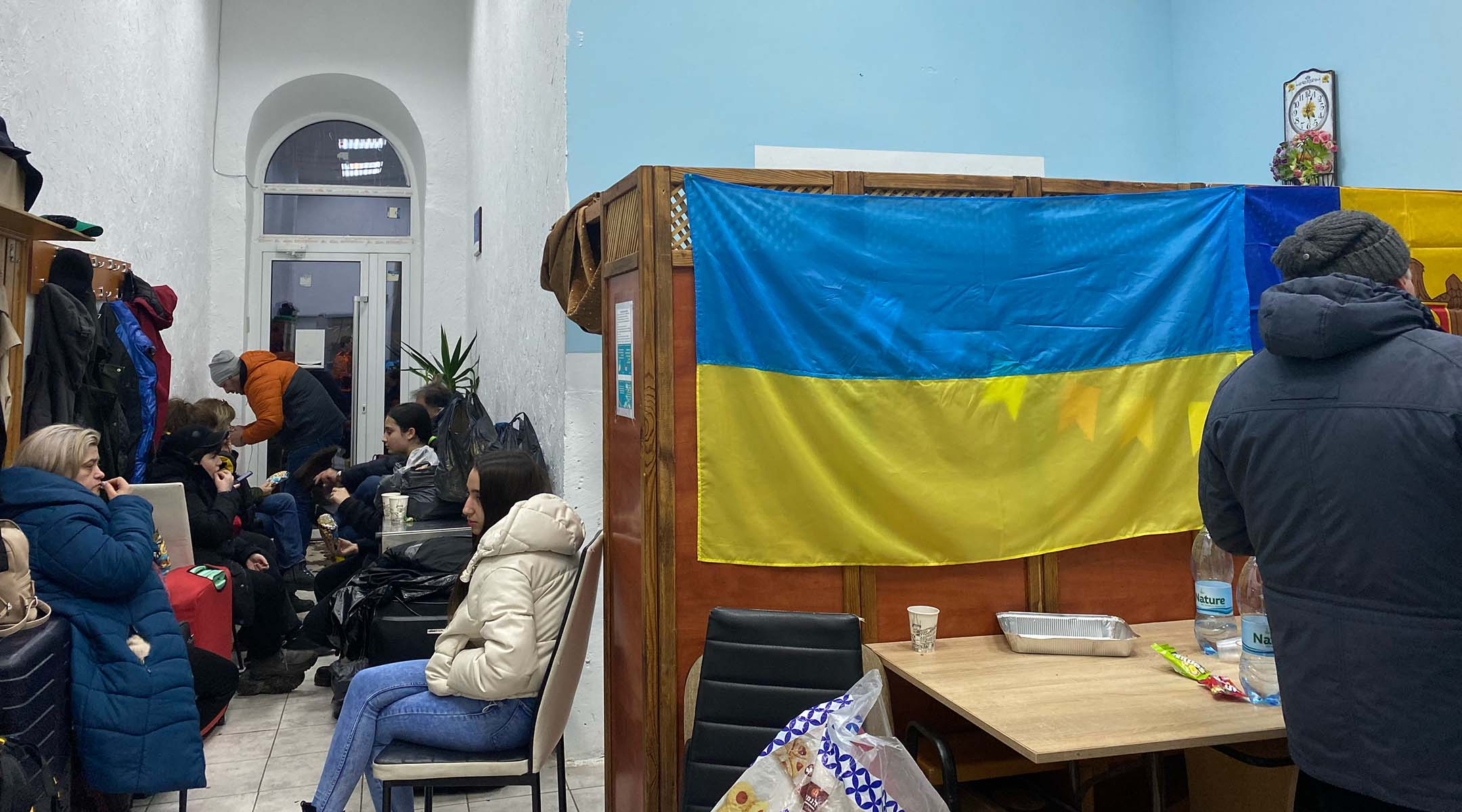 Ukrainian refugees are seen in the Agudath Israel synagogue Chisinau, Moldova, which also houses a local chapter of the United Hatzalah volunteer ambulance group, March 3, 2022.  A Ukrainian flag is hung on the mehitzah, a wall separating men and women worshippers during services. (Jacob Judah)

Russia has claimed that its assault on Ukraine is part of an effort to “denazify” Ukraine. But the picture that Russia paints of Ukraine, whose president, Volodymyr Zelensky, is Jewish, is not one that the thousands of Jews leaving the country recognize.

Natalia Bilokonenko, 52, had been sheltering in an underground car park from Russian missile attacks on Kyiv when she decided that she had to get her seven-year-old daughter out.

“I thought that we could stay,” she said, “but the fighting in the districts around Kyiv started to get much worse and at that point I got frightened. I got a message at 2 a.m. saying that there was going to be a group of people leaving that morning and so I decided to take my daughter and go.”

They boarded a bus organized by the city’s Jewish community and the Israeli government and set out for Moldova. When she arrived, she was told that the Poland-registered bus was not going to be allowed to enter Moldova, and that she would have to find her own way to Chisinau. She got in contact with Chabad in Moldova, who told her they would help her pay for a car if she could find one.

Her daughter was playing with a toy that she had brought her from home, until it fell close to a dog that was whimpering besides its sleeping owner. Then she decided that it was time to hold her mother’s hand again.

Bilokonenko’s son and ex-husband are fighting. As she spoke, her phone buzzed constantly.

“I am in constant contact with him,” she said about her son. “I am a doctor, and usually as a doctor you learn to control your emotions, but I am so worried about him.

“He says he is safe,” she said as her eyes began to redden.

She is going to take her daughter to Italy, where she has a friend who she can stay with.

“I want to say one thing about Ukraine,” she said. “The Ukrainian nation is very strong in spirit, and we will fight to the end.”