What Putin’s talking about when he talks about ‘denazification’ 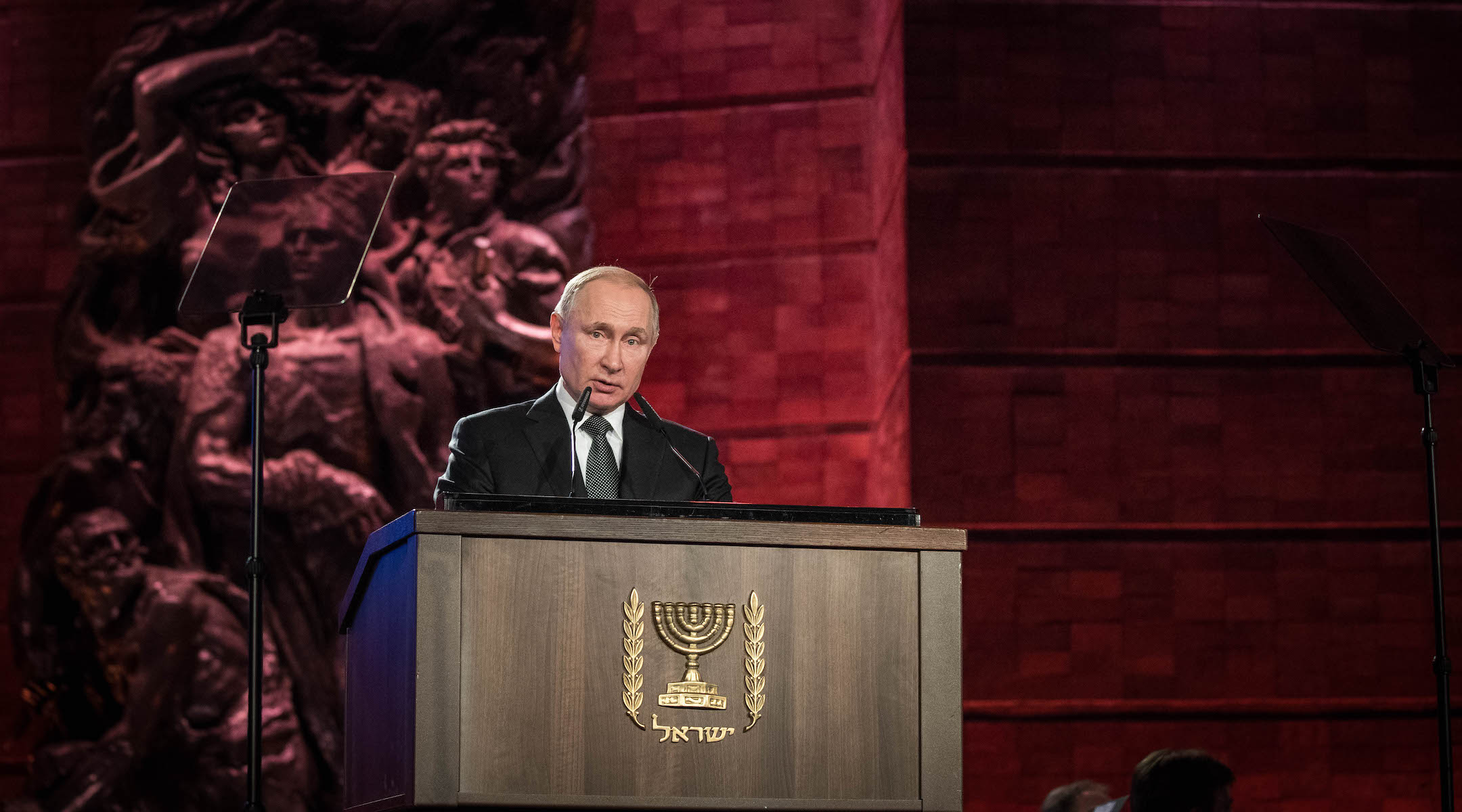 (JTA) — In launching his war on Ukraine, Russian President Vladimir Putin declared his goal was the “denazification” of the country – referring specifically to his allegations that Ukraine is responsible for or planning a “genocide” of Russian-speakers in Ukraine’s eastern provinces.

Much of the world scoffed at Putin’s justifications for what some are calling the biggest test for the West in the 77 years since Nazi Germany surrendered. The Yale philosopher Jason Stanley, in a tweet that went viral, wrote, “The President of Ukraine [Vlodymyr Zelensky] is Jewish, and has many family members who died in the Holocaust. Putin’s claim that he is invading to ‘de-Nazify Ukraine’ should shock the world.”

Stanley is the author of “How Propaganda Works” and “How Fascism Works,” two books that couldn’t be more relevant to the present moment, with Russian forces engaged in a multi-pronged attack on a democratic neighbor after months – really years – of agitation by Putin.

I spoke to Stanley on Friday, about the ways Putin has flipped the narrative about fascism and Nazism, how his brand of Christian nationalism plays on what Stanley considers antisemitic tropes, and how Stanley’s work was inspired by the experinces of his parents, both Holocaust survivors.

Our conversation was edited and condensed for clarity.

ASC: Putin’s claim that the war is intended to “denazify” Ukraine seemed to most observers outside of Russia absurd on its face, but he must have thought it would be an effective message, certainly at home. What makes propaganda effective?

Jason Stanley: It is an example of “undermining propaganda.” And that’s when you use an ideal to undermine itself. If there is any far-right, ultra-nationalist, imperialist regime that is similar to National Socialism, in that part of the world, it’s Putin’s regime. And if there’s any democratic regime surrounding Russia, it’s Ukraine, right? So what denazification means here is that he is going to go into Ukraine, kill or imprison the democratic leaders of Ukraine and all who support them and replace them with a puppet he can control.

The reason that he does this is because he can, he can lean on the history of Russia and the history of World War II, in which the Germans are always the enemies, and he is the one representing the West and democracy against the fascists and the Nazis.

So when does propaganda like that work? I mean, is it a slow, steady process of nationalist brainwashing? Or are there times of crisis where people rally around what are demonstrably false messages?

I don’t think this propaganda did work. I think that enough people in Russia and certainly the West are fully aware of the facts, that the far right in Ukraine gains 2% or less of the vote. Or that Zelensky is Jewish and that much of his family was wiped out in the Holocaust, and that Ukraine is the only country other than Israel ever to have simultaneously both a prime minister and president who were Jewish [Zelensky and  former prime minister Vlodymyr Groysman], other than Israel So I don’t think that propaganda will work. As a result, Russia is going to just be seen as a violent aggressor.

Do fascists tend to believe their own propaganda?

It depends. A lot of people will use fascist tactics just for power, and it just doesn’t matter. I mean, Hitler was a committed genocidal antisemite. But, he also clearly states in “Mein Kampf” that you should use the Allies’ propaganda against them. You should reverse it, you know, “you’re the fascist.” Even in the most extreme cases, it’s very often knowingly cynical, because fascists don’t care about the truth. They just care about power.

You’ve written how propaganda is effective when it makes the dominant group feel like a victim. That’s certainly at play with Putin.

That’s right. What’s not acceptable – and here I get emotional because I’m the child of Holocaust survivors – is the trivialization of the Holocaust by claiming that there’s a genocide in eastern Ukraine. I mean, Putin’s regime is a Christian nationalist regime, and Christian nationalism is a threat to Jews everywhere. And I don’t think he’s trying to convince anyone. I think he’s trying to mock the language of the Holocaust. It’s Eastern European antisemitism. Eastern European antisemitism takes the form of saying that we Jews stole the victimhood narrative. He’s mocking Jews. He saying, “The real victims are Christian Russians in eastern Ukraine. Those are the victims of genocide, not the child of a Holocaust survivor, descended of Holocaust survivors, the Jewish leader of Ukraine.” And that’s where I see the appeal: Christian nationalism is antisemitic to its core.

When does propaganda fail? Is it a matter of overreach – when a message or an action becomes so preposterous that even your followers can’t get on board?

Sometimes the point of propaganda is to demonstrate the power by the preposterousness of it. Putin is a master at that. Putin is always lying, like Trump, who has imitated this. If you lie openly and obviously, in this mocking, sneering, condescending way — like, “How would anyone think we’re going to invade Ukraine? It’s a Western conspiracy theory!” — what you do is that you show you can get away with it, and that to supporters comes off as strength.

You write that cultivating loyalty is a key part of what creates fascism.

Cultivating fascism requires ethnic loyalty ties. Fascism at its weakest is just nationalism,but in this German form of National Socialism or white nationalism in America or Russian nationalism, loyalty is formed by a bond of identity. I see Putin appealing to Eastern Orthodox Christian nationalism. He’s trying to reestablish something like the Soviet Union, or the pride of Russia. That’s why I think there’s an unrecognized element of antisemitism, an appeal to Russian Christian nationalism.

Although at the same time, some insist Putin is a philosemite, with good ties to parts of the Jewish establishment in Russia and fairly good – or at least tolerable – relations with Israel.

Because nationalism. What you have now is you have different ultra-nationalist groups in different countries and they’re all saying, “this country is mine.” And that is going to link Putin with nationalists in Poland and nationalists in Israel. But they’re going to have competing interests, as was the case with Poland and Israel, because their national histories clash. So when the Polish government starts denying Polish complicity in the Holocaust, that’s going to sit poorly with people in Israel who otherwise share their nationalist sentiments. 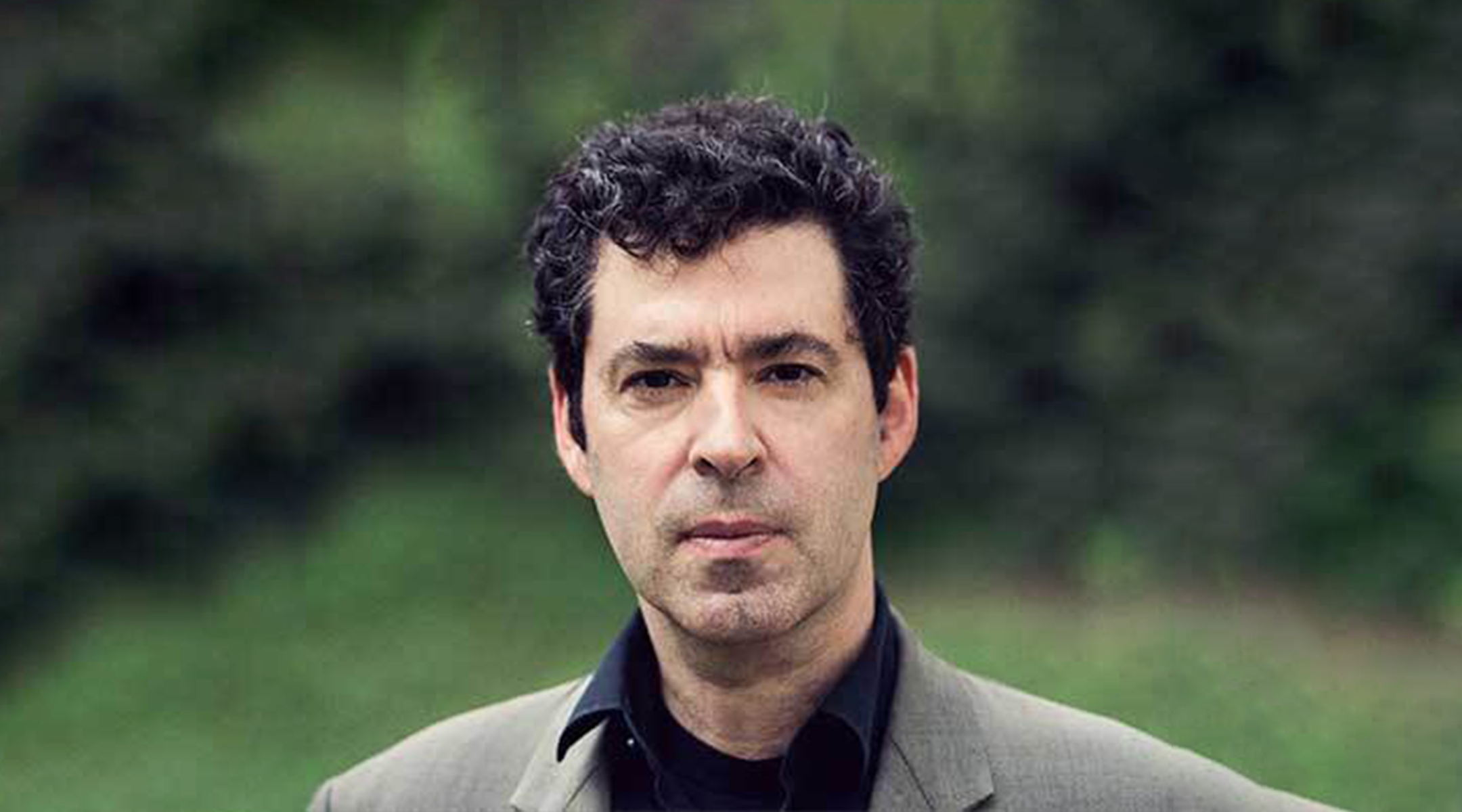 In your book on fascism, I got the sense you were somewhat optimistic about the ability, at least in the United States, of democratic systems’ ability to push back against the worst impulses of fascists. But in a case like Ukraine, obviously the worst-case scenario, is there an antidote beyond just total war?

I’m a philosopher. I have to say that question goes beyond what I can comment on. I have hope and optimism, because there’s no other choice. Ukraine was a moment of hope: the Maidan revolution, the genuine fledgling democracy. Insofar as there was a far-right movement, it was suppressed. And so that was a moment of hope. But, you know, maybe we can see the terrible violence that greets it as a recognition of the power of hope.

You’ve alluded in your work to your family’s experience of the Holocaust. Can you tell me what that was?

My father was almost 7 when he left Berlin in August in July 1939. And his grandfather was the chief cantor of the Fasanenstrasse Synagogue, the largest Jewish congregation in all of Germany. His mother, Ilse Stanley, was a hero during the late 1930s, when she went into the Sachsenhausen [concentration camp] many hundreds of times dressed as a Nazi social worker to free prisoners. And my father remembered Kristallnacht. He was right there in Charlottenburg. He had very clear memories of standing on my great-grandparents’ balcony, watching Nazi parades marching by and begging to be allowed to join. He didn’t understand that he couldn’t join.

My mother is from Chelm (but no jokes) and was born on the march from Poland to Siberia in 1940 and grew up in a Siberian labor camp. Her entire family was wiped out, all eight aunts and uncles, every single first cousin. My great-grandmother died in Sobibor. They returned to Poland the only survivors. She told me just the other day that she met her father by accident on the Trans-Siberian Railway, coming back from different labor camps. They came to the United States in 1948 when she was 8 after three years in Poland.

I’ve heard you talk about your late father, the sociologist Manfred Stanley, and his library, which was pretty heavy on books about Germany and the Holocaust, and its influence on you.

My father spent his academic career thinking about what led to fascism. I remember asking a colleague at Yale during my first years here, Why did my father, a Holocaust survivor, write his dissertation on British imperialism in East Africa? “Because, Jason,” he said, “part two of Hannah Arendt’s ‘The Origins of Totalitarianism’ is called ‘Imperialism.’” My father started out studying imperialism and what leads to it, and that’s what we’re seeing in Russia right now.

What would your father have made of the current moment?

My work is reimagining or imagining or sketching what I think my father would make of the current moment.