At the Moldova border, Jews from Odessa wonder when they’ll be able to return home 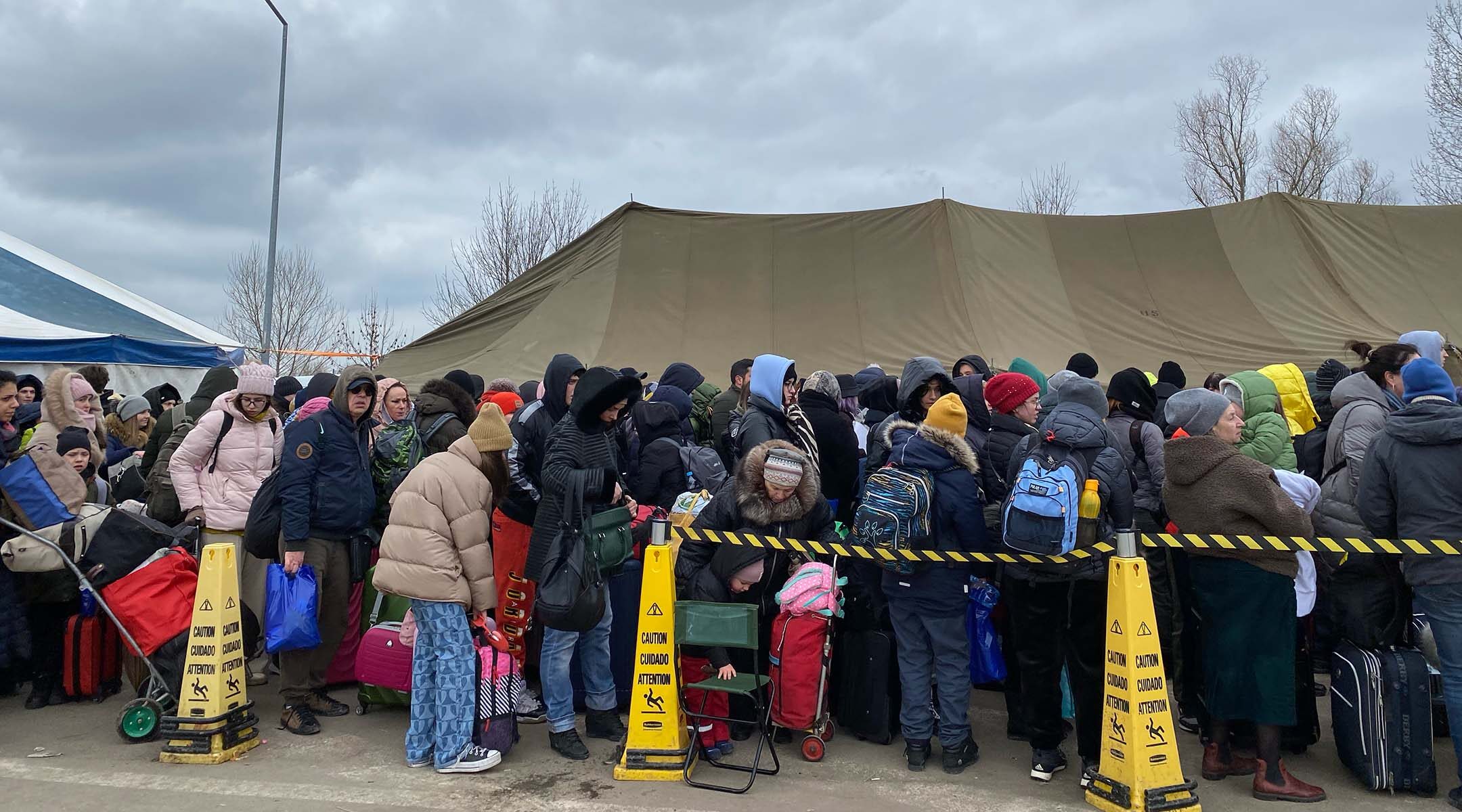 Thousands of Ukrainians wait to enter the checkpoint at the Ukraine-Moldova border in Palanca, March 5, 2022. (Jacob Judah)
Advertisement

PALANCA, Moldova (JTA) — When you stand under the border post between Ukraine and Moldova, things feel almost normal. There are a dozen cars being processed. There is a border guard drawing on a cheap cigarette. There is even a duty-free shop where you can buy yourself a coffee.

And yet there was nothing normal about the scene on Saturday. Thousands of Ukrainians are waiting patiently in the freezing wind to enter the checkpoint, fleeing Russia’s attack on their homeland. Every so often, a border guard waves a few more in, and a trickle of children, women and old men pick up their suitcases and anxiously hurry towards a booth where they will be stamped into Moldova.

Sofia, 48, has just crossed. Around her, six buses of people from nearby Odessa — Jews and non-Jews — are standing beside a tent where Moldovan volunteers are handing out coffee and tea.

“I have to take my elderly aunt out of Ukraine,” Sofia explained, almost apologetically. “It will take at most two weeks, but then I am going back to Odessa.”

The  evacuation has been organized by the American Jewish Joint Distribution Committee, or JDC, whose volunteers are making sure that nobody misses the buses that they have organized to take everyone directly to Bucharest, Romania’s capital.

The JDC, which says it supports some 40,000 Jews across Ukraine, has snapped into action since the war began and is working with partners including the Jewish Agency — a nonprofit that aids Jews and helps them immigrate to Israel — to provide support to Jews withstanding or fleeing Russia’s assault. 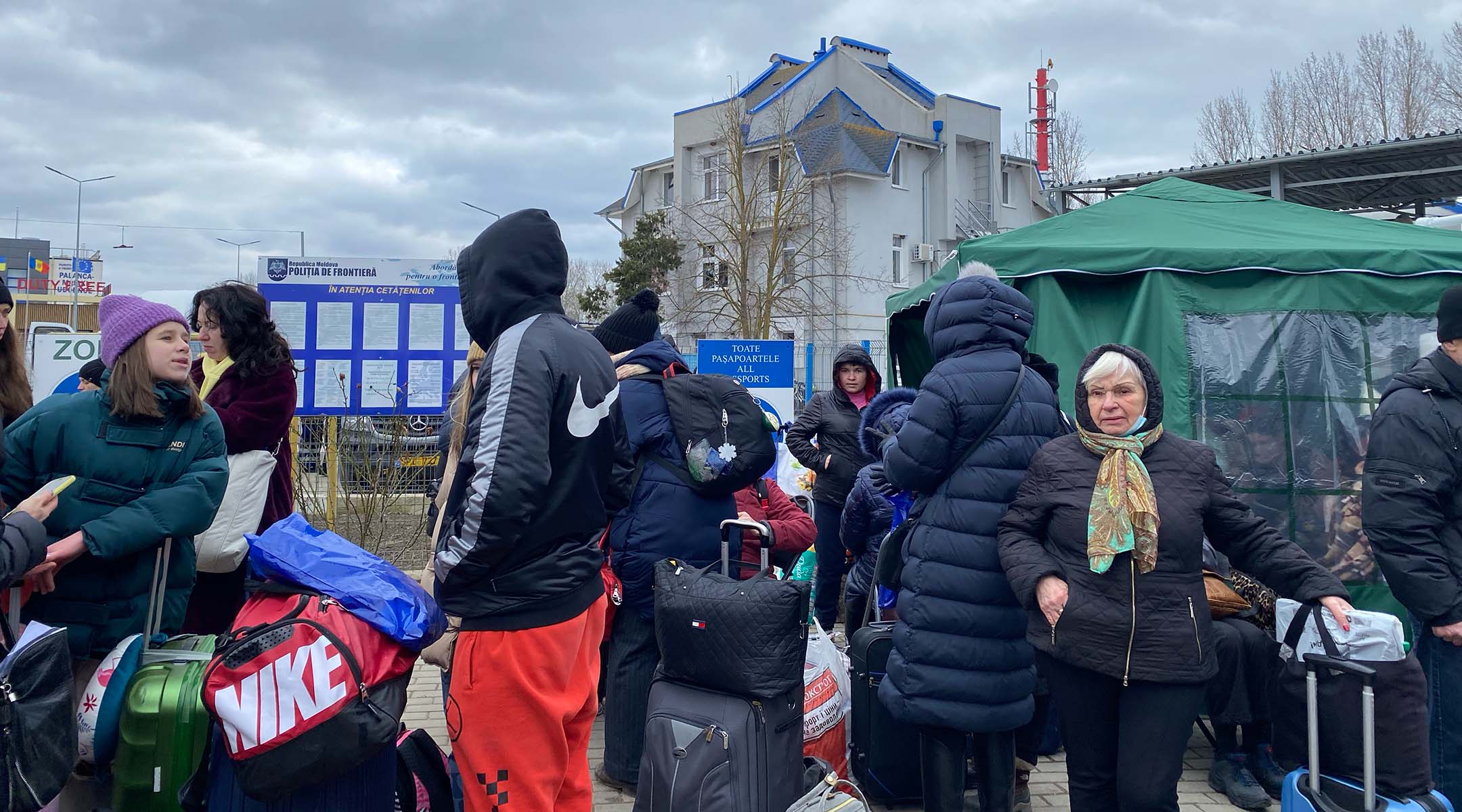 Jews from Odessa wait at a checkpoint at the border between Ukraine and Moldova. (Jacob Judah)

The JDC, famous for carrying out relief and rescue missions during World War II, has moved its base of operations in Ukraine from the capital, Kyiv, to the western city of Lviv. In various news releases, JDC said it had been preparing for various “war-related” scenarios and that it is now providing Ukrainian Jews who need help with food, medicine and financial support. It is also arranging transportation and accommodation for Jews who want to leave. Among those who were evacuated to Moldova is a 91-year-old Holocaust survivor.

The Chabad-Lubavitch movement is also offering aid and advice to Jews and non-Jews at synagogues and other Jewish community centers in Moldova’s capital Chisinau.

Since Russia invaded Ukraine on Feb. 24, over 1.7 million Ukrainians have become refugees, according to figures released by the United Nations High Commissioner for Refugees on Monday.

Among them are thousands of Jews like Sofia. “Very many Jews are leaving Odessa,” she said, “but every single one that I know says that they are already dreaming of when they can come back.”

Her husband remains at home, among the men ages 18-60 who are being conscripted to help fortify Odessa against a possible Russian assault.

When Sofia arrives in Bucharest, she is intending to call a family meeting to decide where she can send her aunt. “I have a son in Israel, but he is in the military, and I am not sure whether he has the time to look after her properly,” she said. “I have a daughter and friends in Germany who said that they can host her, so maybe we will go there.”

With her small black suitcase, half-empty plastic bag and stoic expression, Sofia looked almost as if she were going on a business trip. She spoke of her shock at the events of the past two weeks. “How is it possible that something like this could happen in the 21st century?” she asked. “We all saw the preparations, but nobody expected that it would actually happen.”

Asked what she makes of the claim by Russian President Vladimir Putin that Russia’s invasion is intended to “denazify” Ukraine, she throws her hands in the air and gestures to the people — mostly Jews — standing nearby. “Look around you! Do you see this?”

Palanca, in southeastern Moldova, is the closest border crossing to Odessa, Ukraine’s third largest city. Since Feb. 24, some 230,000 Ukrainians have entered Moldova, and hundreds of thousands more could follow if Russian troops begin to push across south-western Ukraine.

Few Ukrainians who have entered Moldova want to stay. Some 150,000 have already moved onto Romania from where they can disperse around Europe.

Vlada Ignatieva, 27, came on the same buses organized by Odessa’s Jewish community. She hopes to make it to Switzerland.

“I am not Jewish, but today when I went down to the synagogue to catch the bus, I really felt like I was with my community,” she said. “How do I become Jewish?” she laughed.

Odessa once had the second largest Jewish population in the Russian Empire and before the Holocaust was one of the foremost centers for Jewish writers, activists and business owners. Jews who survived the genocide or returned after the war fled again during the twilight of the Soviet Union. In 2014, the World Jewish Congress estimated that there were about 45,000 Jews left — or perhaps as many 200,000, depending on how you count. When the fighting in Ukraine finally stops, those numbers are expected to shrink. 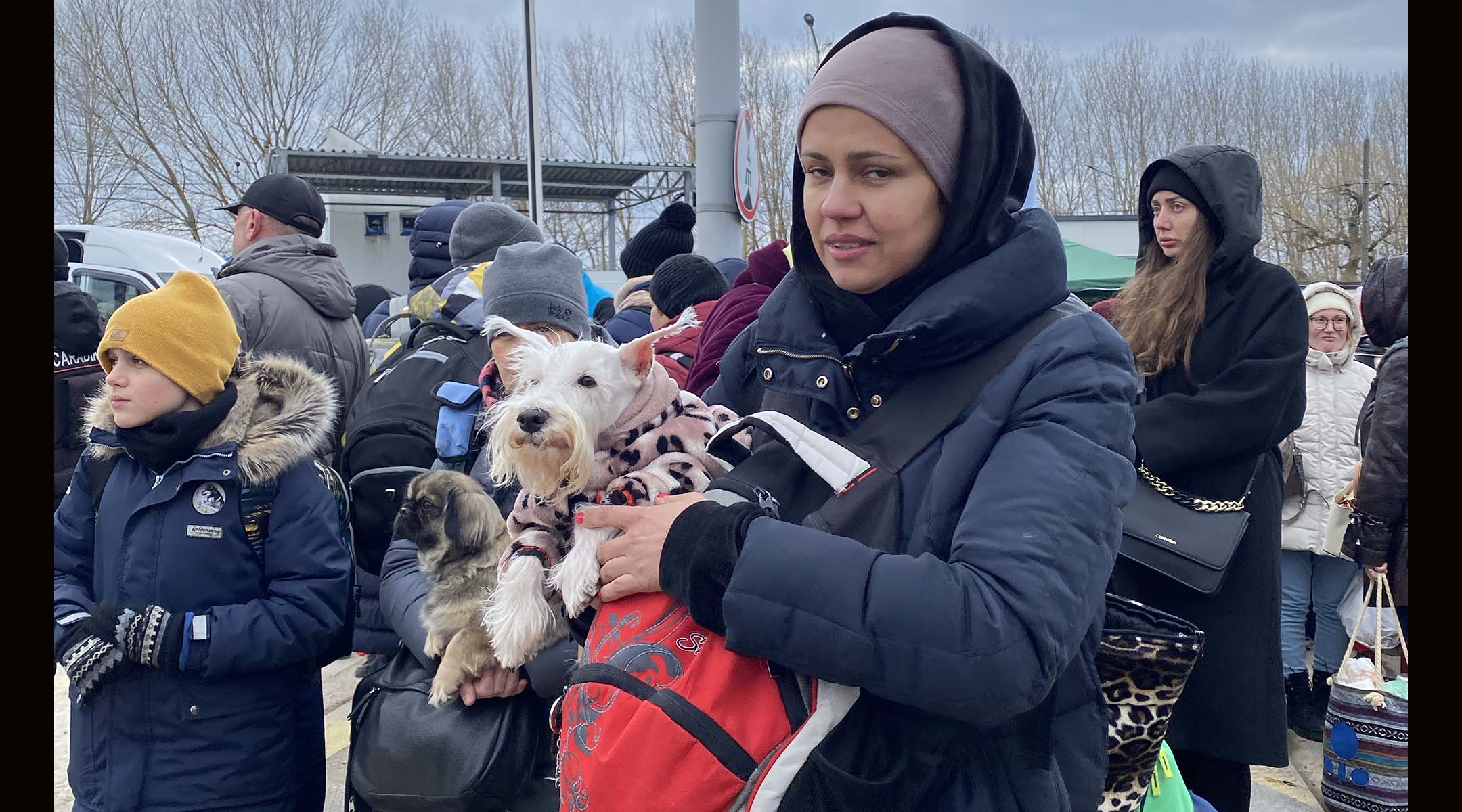 Tatyana, 44, is among those who think that she might not return.

“‘I am hoping that the situation calms down soon, but I am not really optimistic,” she said. Since the invasion, she said, she had been taking her children and her two dogs down to her building’s basement almost every day because of sirens.

Tatyana had friends in Chisinau who offered to take her in but said that she is intending to go straight through to Romania. “I don’t know where I am going to go after that,” she said.

She swaddled one of her shivering dogs, named Wonderful Life, close to her chest. Nearby, a Moldovan border guard looked on pityingly and piped up: “I suppose that you didn’t name him that with a knowledge of what was about to come.” She giggled.