In appeal to Israel, Zelensky invokes the ‘final solution’: ‘You cannot mediate between good and evil’ 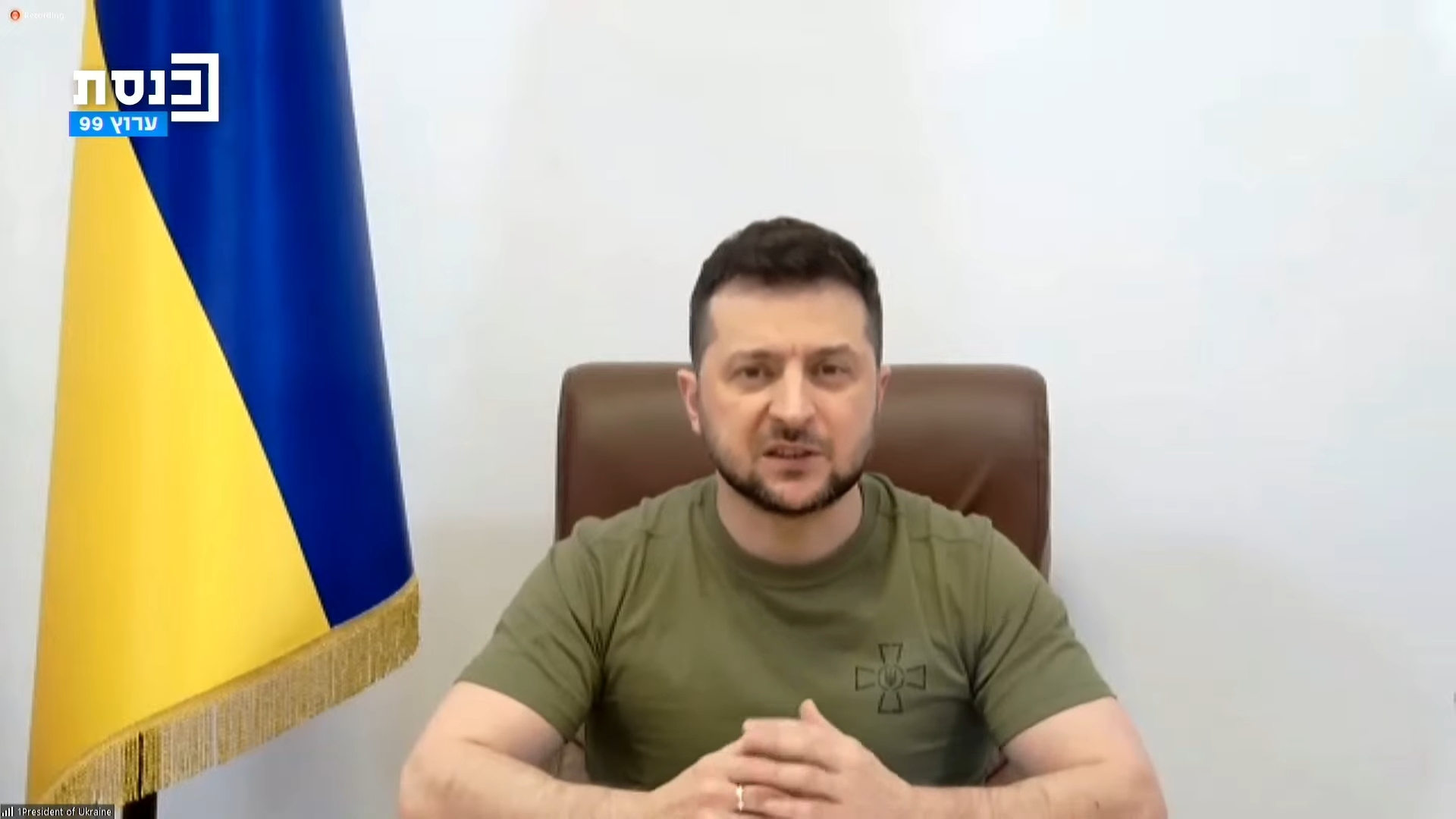 (JTA) — In a searing 12-minute speech addressing the “people of Israel,” Ukrainian President Volodymyr Zelensky likened the “final solution” the Nazis sought to impose on the Jews to Russia’s ambitions for Ukraine.

Zelensky also appealed, yet again, for military assistance and criticized the government of Prime Minister Naftali Bennett for trying to maintain relations with both Ukraine and Russia.

Zelensky, who is Jewish, acknowledged the sensitivity of Holocaust analogies in his speech Sunday but said they were apt in this case.

“The invasion of Russia into Ukraine is not just a military operation, as they present it in Moscow. This is a comprehensive and unjust war that is aimed at destroying our people, our country, our cities, our culture our children, everything that makes Ukrainians Ukrainian,” he said. “All the things that Russia is wickedly destroying while the world watches, so I can make this parallel, this comparison of our history to yours. … They didn’t want to leave any remnant of you and now they don’t want to leave any remnant of us.”

“They called this ‘the final solution to the Jewish question,’ you remember well, and I am sure you will never forget, but listen to what they are saying in Moscow, they are once again saying ‘the final solution,’ but now they are referring to us, to the idea of Ukraine,” he said.

He used the phrase “people of Israel” multiple times in the speech, which directly addressed members of the Knesset, most of whom logged in via Zoom, but was also broadcast live, including in downtown Tel Aviv, where crowds of supporters cheered and waved the flag of Ukraine.

“You have to answer these questions and afterward live with those answers,” he said. “Ukrainians made their choice 80 years ago, we saved Jews, and there are among us righteous gentiles. The people of Israel, you also now have a choice.”

Some Ukrainians sought to rescue Jews, but many others collaborated with the Nazis in seeking the extermination of the Jews. Ukrainian collaborators played a notable role at the Babyn Yar massacre site, where a Russian strike near the start of the current war gave Zelensky and his government grounds to appeal to Jewish sensibilities in seeking support for Ukraine.

Zelensky thanked Bennett’s government for its support of Ukraine at the outset of his speech; Israel has delivered humanitarian assistance to the country. But as he drew to a close, he excoriated Israel’s government for not making hard choices and called on it to deliver to Ukraine batteries of its Iron Dome anti-missile system and to allow in Ukrainian refugees.

He said he did not understand what the calculus was of the Israeli government, which has held back in forcefully condemning Russia and has resisted calls for more assistance, and which has claimed its relative neutrality could be useful in helping to broker an end to the war.

“What is this, apathy, calculation, or mediation without picking a side?” he said. “I leave the answers to you, but I want to emphasize, apathy kills, calculations can be wrong, one may mediate between countries but not between good and evil.”

Israeli Foreign Minister Yair Lapid thanked Zelensky after the speech but suggested that assistance would come in the form of humanitarian aid and in allowing in greater number of Ukrainian refugees. Israel has so far agreed to allow in at least 25,000 Ukrainians who would not otherwise be eligible for citizenship.

“We will continue to assist the Ukrainian people as much as we can, and we will never turn our back on people who know the horrors of war,” Lapid said on Twitter.

Israel is wary of delivering military assistance to Ukraine because of the presence of the Russian military in neighboring Syria. Israel reportedly has received Russian green lights to strike Iranian targets in Syria.

The analogy to the Holocaust did not go down well among some Israelis, nor did Zeklensky’s bid to depict Ukraine’s Holocaust era record as one wholly of assistance to Jews.

“I appreciate the Ukrainian president, and I support the Ukrainian people in my heart and in my actions, but one cannot rewrite the terrible history of the Holocaust,” Israel’s communications minister, Yoaz Hendel, said in a tweet. “A genocide took place on Ukrainian soil. War is terrible, but comparisons to the Holocaust and the final solution are risible.”