Jewish Ukrainians gear up for fierce Russia fight, alongside the ‘neo-Nazis’ they say Putin is lying about 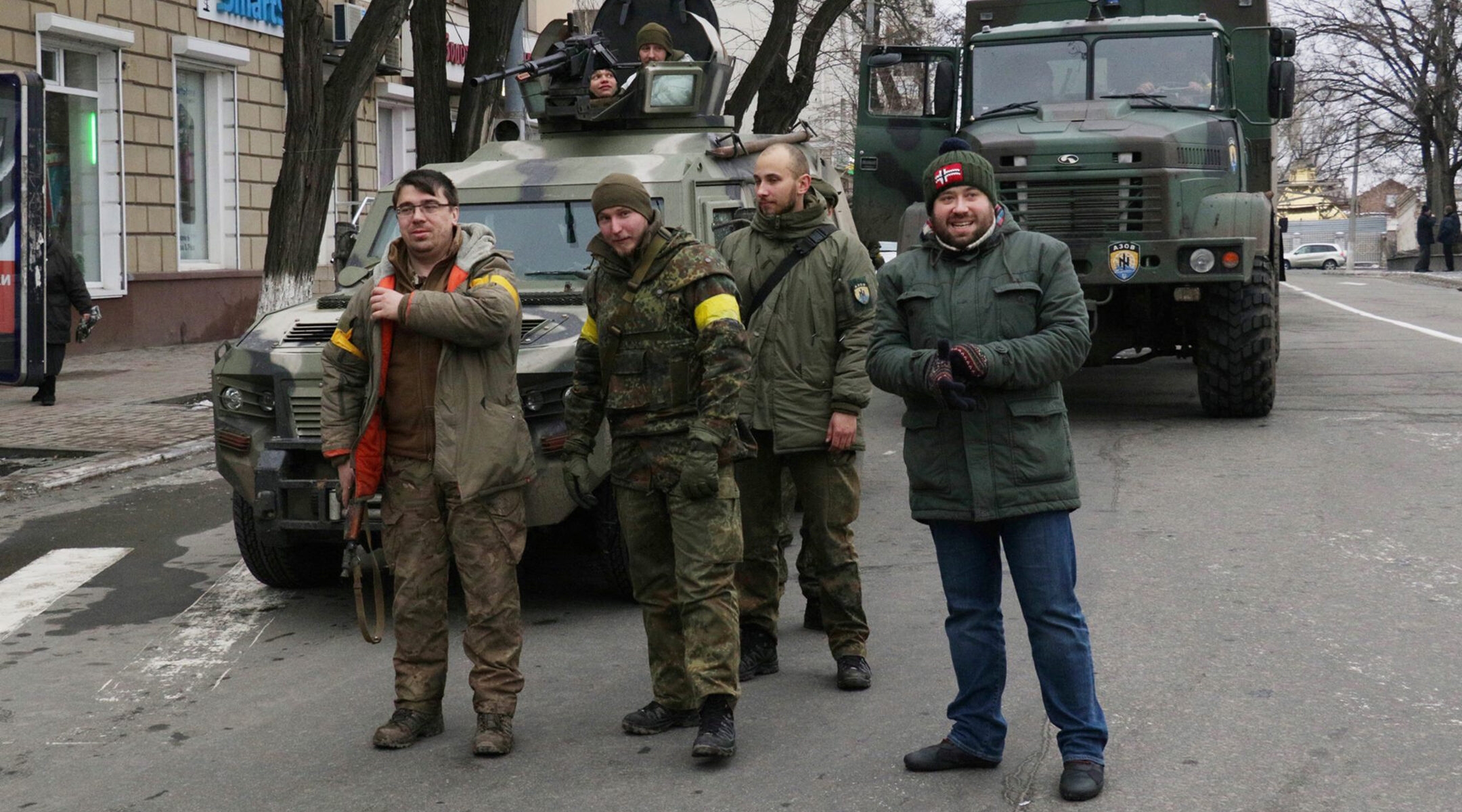 Konstantyn Batozsky, right, stands with members of the Azov Battalion in Mariupol. (Courtesy of Batozsky)
Advertisement

(JTA) — Konstantyn Batozsky believes he is on a list of so-called “neo-Nazis” to be rounded up “Gestapo-style” and “exterminated” by Russian forces seeking to enter Kyiv.

Batozsky, a Jew from eastern Ukraine, said he was informed about the “bounty on his head” by Ukrainian intelligence sources. But as a longtime and avowed Ukrainian nationalist who has collaborated with an paramilitary group that has a reputation for including extremists, he knows that it’s people like him that Russian President Vladimir Putin was talking about when he cited a need for “denazification” as a pretext for invading his country.

“I have been staying underground away from my apartment where the Russians will try to find me,” Batozsky said from a makeshift bunker preparing for what appears to be an imminent invasion as bombs rained down outside the city center.

“I am happy that I’m alive,” he reflected, as he coordinated efforts to get much needed supplies to the Ukrainian army. “It now feels like every day could be the last.”

Initially cheerful in the early days of the war as the Ukrainians were surprisingly resilient against the much bigger Russian army, Batozsky now sounded more worried. And angry.

“The Russians are advancing and the West is not helping. Just words are not enough,” he lamented. Batozky pleaded for Western countries to intervene militarily.

Among those taking up arms for the first time as volunteers for the civilian army include Jews like Batozsky, who was passionately devoted to the Ukrainian national cause in his native Donetsk years before Russia decided to wage war on the entire country. He was a former advisor to the governor of Donetsk, Serhiy Taruta, now a member of the Ukrainian parliament.

Donetsk is one of two eastern regions where pro-Russian separatists, supported by the Russian military, clashed with the Ukrainian forces from 2014 to 2015. The simmering conflict was the precursor for the current Russian invasion as Donetsk and Luhansk declared independence, which is not recognized by Ukraine.

It might seem perplexing to observers in the United States and beyond that Jews would embrace Ukrainian nationalism, which some of its opponents — including Putin — say is tinged with antisemitism.

“There was definitely a Jewish memory of anti-Jewish pogroms conducted by Ukrainians,” said Sergiy Petukhov, Ukraine’s former deputy minister of European Integration whose mother and grandfather live in Israel. Also a native of Donetsk, Petukhov describes himself as a Ukrainian with Jewish ancestry, “like our current president,” he said, referring to Volodymyr Zelensky.

Ukraine’s history of antisemitism go far beyond pogroms. In their efforts to exterminate Jews, the Nazis were significantly aided by Ukrainians during World War II, according to several historians.

More recently, some of the initial paramilitary fighters against the Russian-backed takeover in Ukraine’s east, such as the Azov Battalion, were extremists and ultranationalists who displayed Nazi symbols. 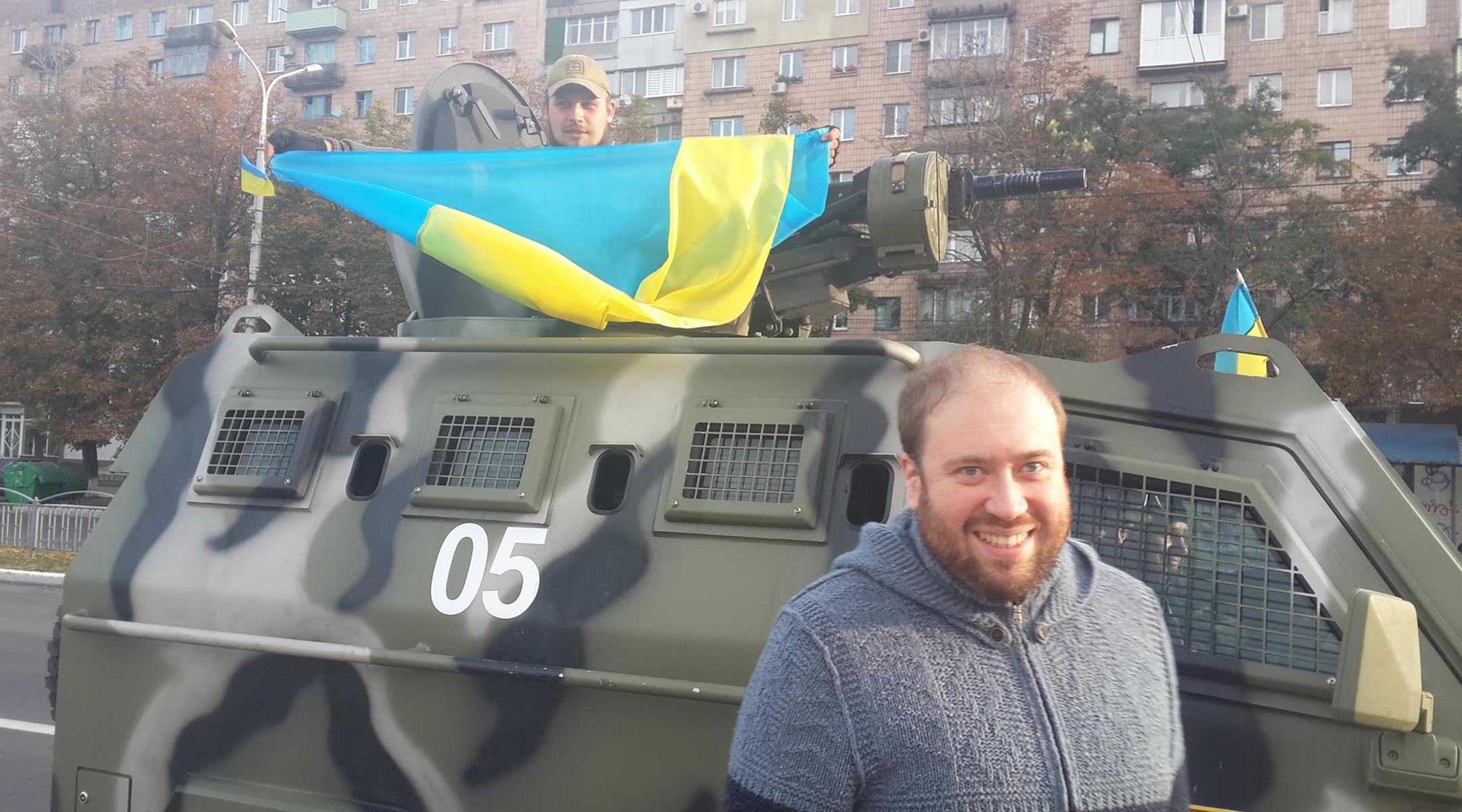 Konstantyn Batozsky smiles in front of a military vehicle in Donetsk, Ukraine, in 2014. (Courtesy of Batozsky)

“I know it’s hard for Jews abroad to understand, but these actions were intended as anti-Russian, not anti-Jewish,” Petukov said. “And when it comes to those supporting Ukrainian sovereignty and culture, this is really a tiny element.”

Now part of the national guard, the battalion of 900 to 1,500 members publicly claims to eschew all Nazi ideology.

Batozsky said he worked closely with the Azov Battalion during the 2014-15 conflict behind the scenes as a political consultant in Donetsk. It is this work, and his outspoken defense of Ukrainian efforts to defeat the separatists, that he says put him on the Russian hit list — and also that makes him confident that Russian charges of neo-Nazis in Ukraine are inaccurate.

“They were soccer hooligans and wanted attention, so yeah, I was shocked when I saw guys with swastika tattoos,” he said about the Azov members he got to know. “But I talked with them all the time about being Jewish and they had nothing negative to say. They had no anti-Jewish ideology.”

He insists that the image of Ukraine as a hotbed of antisemitism is absurd.

“I don’t practice, but still everyone knows I am Jewish — I have such a Jewish face! And I never experienced antisemitism from Ukrainians,” he insisted. “The military guys I am working with now really don’t care that I am a Jew.”

He does not have similar feelings towards his Russian neighbors. “I did have a Jew-hating Russian first-grade teacher who mockingly called my long hair payos,” recalled Batozky, using the Hebrew term for the long sidecurls kept by many Hasidic men. And he said he heard more slurs against Jews from Russians Moscow State University, which he attended in the 1990s, then he ever heard back home.

Daniel Kovzhun, a Jew from Kyiv who ran logistics during the war in Donetsk for paramilitary units, described a similar experience.

“There were Orthodox Jews in Azov,” he said. “I know because I was there on the battle lines. No one cared who was Jewish, we cared about keeping our country together.”

Like Batozsky, Kovzhun, who lived and studied in Israel before returning to Kyiv, has joined the newly formed civilian army in Kyiv, the Territorial Defense Forces — an overnight volunteer force that has attracted Jewish fighters across the country, and even from abroad.

A director of advertising commercials who says he has easily transitioned into directing “war communications,” Kovzhun believes many of the Jews in Ukraine are actively supporting the country’s defense.

“The Russians are committing atrocities here and Ukrainian Jews are not silent when injustice is going on. This is what being Jewish is all about,” he said.

Last week the Ukrainian government provided more than 20,000 guns of varying size and shape to ordinary civilians in the capital who have never fired a shot.

Among them is Batozsky, who has acquired a Kalashnikov, although he admits that he has “no experience shooting, assembling or disassembling a gun.”

In recent days, as Kyiv has come under siege, Batozsky has been working around the clock. “Together with friends we created a volunteer depot in a basement where we collect everything the soldiers need and distribute them,” he said.

Like many other Ukrainians interviewed by JTA in cities awaiting siege, Batozsky said public morale was very high.

“In terms of human relations, it is extraordinary. People are really caring towards one another. We all share whatever we have.”

He said the situation at shops reminded him of his Soviet childhood. “The stores are open but the shelves are mostly empty,” he said.

But as in Soviet times, residents’ ingenuity is providing succor.

“Women are mixing molotov cocktails and then they bake piroshki, small pies that can last a long time, and bring them to the soldiers. Small businesses deliver drinking water, pharmaceutical businesses are giving us medicine,” Batozsky said. “No one is sitting and doing nothing. The scariest place in Kyiv right now is at home with [a] laptop.”