For many Jews watching Ukraine’s war, Volodymyr Zelensky is a ‘modern Maccabee’ 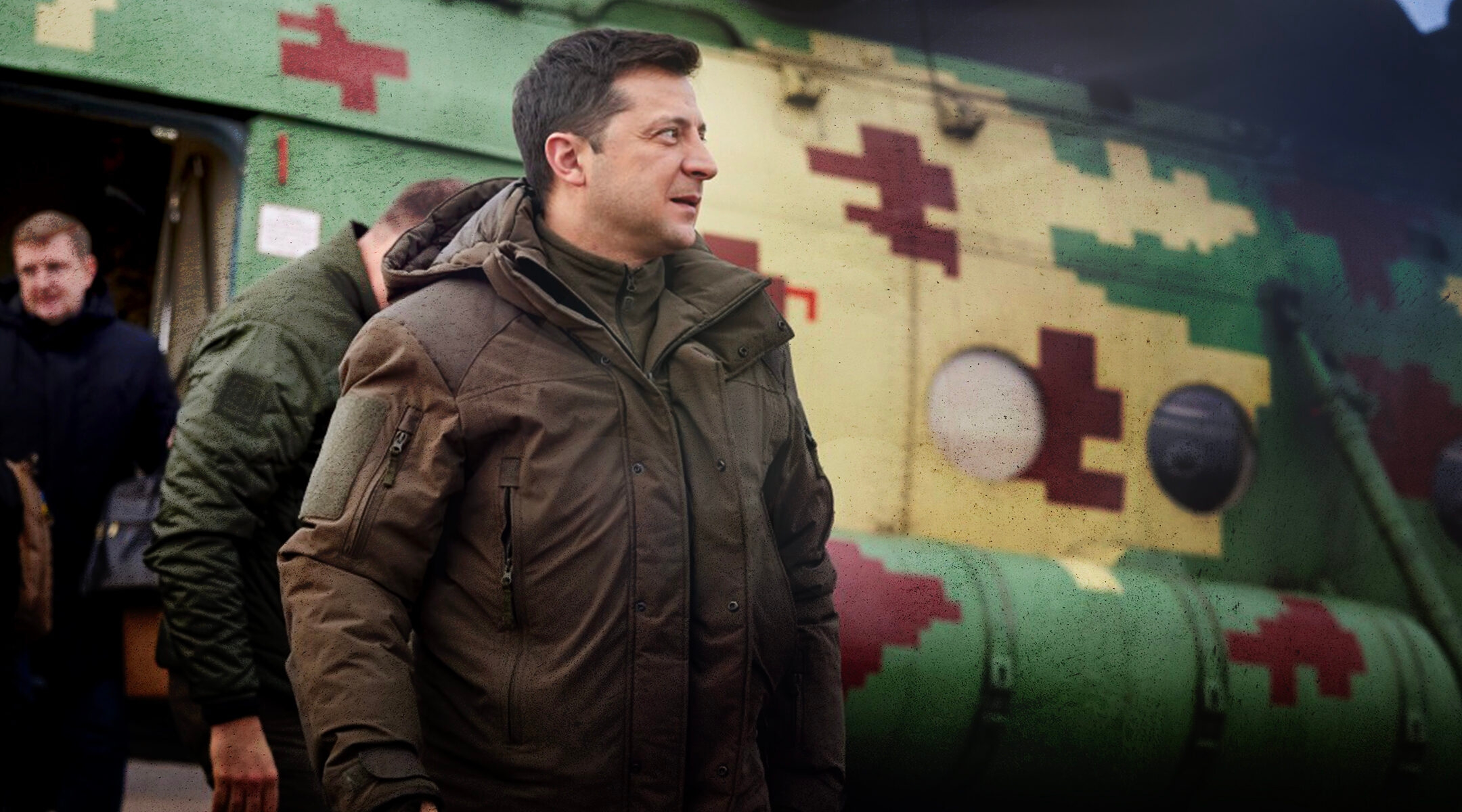 Ukrainian President Volodymyr Zelensky is drawing admiration from Jews who see him as a heroic figure. (Anadolu Agency/Getty Images)
Advertisement

(JTA) — One week ago, Jews outside of Ukraine knew Volodymyr Zelensky as the world leader on the other end of the “perfect phone call” that resulted in the impeachment of President Donald Trump.

But now, after days of watching Zelensky balance humor and gravitas while rallying his fellow Ukrainians to rebuff the Russian army invasion, they know him as a contemporary Jewish hero.

Fox was referring to the ancient Jews who, though outflanked in every way, fended off the efforts of foreign fighters, directed by a power-hungry ruler, to quash their independence and culture.

That history can be seen as an apt comparison for what’s happening in Ukraine — and it’s one of several reasons that Zelensky’s leadership is resonating so much with Jews the world over.

“As a Jew, it is impossible not to feel proud of the courage, dignity, and defiance shown by Zelensky at this moment,” Molly Crabapple, a prominent leftist writer and artist, said in a tweet late Friday night, shortly after Zelensky posted a video showing him in the center of Kyiv, defiant in the face of encroaching Russian forces.

In Tel Aviv, people rallying for Ukraine chanted Zelensky’s name. A tweet by a former Israeli speechwriter encouraging people to pray for him by his Hebrew name was shared tens of thousands of times over the weekend. And multiple memes ricocheted around the internet highlighting Zelensky as a powerful embodiment of Jewish pride.

“This is Volodymyr Zelensky. President of Ukraine. He is Jewish. His grandfather fought Nazis in WWII. Many of his relatives were killed in the Holocaust,” said one of them, shared by Good, a media company. “He is standing up to a dictator. Because he is brave. Because he knows what happens if you don’t.”

Another, shared by the organization Stop Antisemitism, emphasized Zelensky’s roots in a family decimated by the Holocaust. Over a photo of Zelensky, the meme says, “A Jewish Ukrainian family had 4 brothers. 3 were murdered by the Nazis. Only 1 survived,” referring to his grandfather.

Behind the feel-good sentiment of the memes lurks more complicated subtexts. Some saw the elevation of Zelensky as a Jewish hero as implying that others who came before him, potentially including Jewish victims of the Nazi genocide, lacked the bravery needed to survive, or that a Jewish president should be remarkable in a country where, not so long ago, more than 1.5 million Jews flourished.

Those embedded meanings are exactly why Zelensky’s leadership has been so inspiring to Jews, according to Ben M. Freeman, the author of the 2021 book “Jewish Pride: Rebuilding a People.”

A lot of #Jewish pride for #Zelensky #Ukraine #Jew

Freeman suggested the adulation of Zelensky was an antidote to the “Jews went like lambs to the slaughter” allegation that haunted survivors after the Holocaust.

“Jewish people are resilient. Jewish people fight back. Jewish people have always resisted. And I think many Jewish people feel that this is a continuation of that,” Freeman told JTA. He added, “There’s layers of Jewish resilience, but there’s also the rewriting of the Ukrainian Jewish relationship — not rewriting it to erase the past because we cannot — kind of helping us move forward.”

Before becoming Ukraine’s president in 2019, Zelensky was a comedian, and his meteoric rise from just another world leader to beacon of democracy has elicited its share of jokes this week.

“As a Ukrainian-Jewish man, I’m getting a little concerned that Zelensky is setting some unachievable standards of behavior,” tweeted Sam Biederman, a public relations professional in New York City. Fox tweeted about Zelensky’s height, 5′ 7″, and called him “an inspiration to short Jews everywhere.”

But many others say they see in his leadership serious, and gratifying, implications for Jews in Ukraine and beyond.

For one thing, many see Zelensky’s success as a turning point in the history of Jews in Ukraine.

“If Zelensky has now become synonymous with the blue-and-yellow flag of his country, it might signal an unexpected outcome of this conflict that has found Jews feeling finally, improbably, one with a land that has perpetually tried to spit them out,” wrote Gal Beckerman, the author of a book about efforts to liberate Jews from oppression in the Soviet Union, in The Atlantic Sunday. (Beckerman is married to Deborah Kolben, the editorial director of 70 Faces Media, JTA’s parent company.)

This history is part of what Fox said was so inspiring about seeing Zelensky in charge.

“In 1941 over 33,000 Ukrainian Jews were murdered in a 2 day span in the Babi Yar ravine marking one of the deadliest massacres of the Holocaust,” Fox wrote, referring to the mass shooting — first reported by JTA — that was organized by Nazis but supported by local collaborators. “For 🇺🇦 to have a Jewish President descended from a Holocaust survivor standing up to a dictator is really empowering.”

At the same time, Zelensky’s steadfastness in the face of acute danger — and offers of evacuation — would appear to undercut a dangerous, age-old stereotype about Jews, that they are not fully committed to the countries in which they live.

“Now is a good time to dispense with the idea that Jews aren’t really loyal to the country of their birth,” tweeted Elizabeth Picciotto, a writer on Long Island.

Unusually in a moment of extreme polarization, Zelensky is drawing praise from Jews across the political spectrum.

“Fawning over politicians, especially around militarism, makes me uneasy. That said, we should probably get Zelensky this @truahrabbis shirt,” wrote Sophie Ellan-Golan, the director of strategic communication at Jews for Racial & Economic Justice, a liberal Jewish activist group. She pointed to the rabbinic human rights group’s swag, which reads: “Resisting tyrants since Pharaoh.” 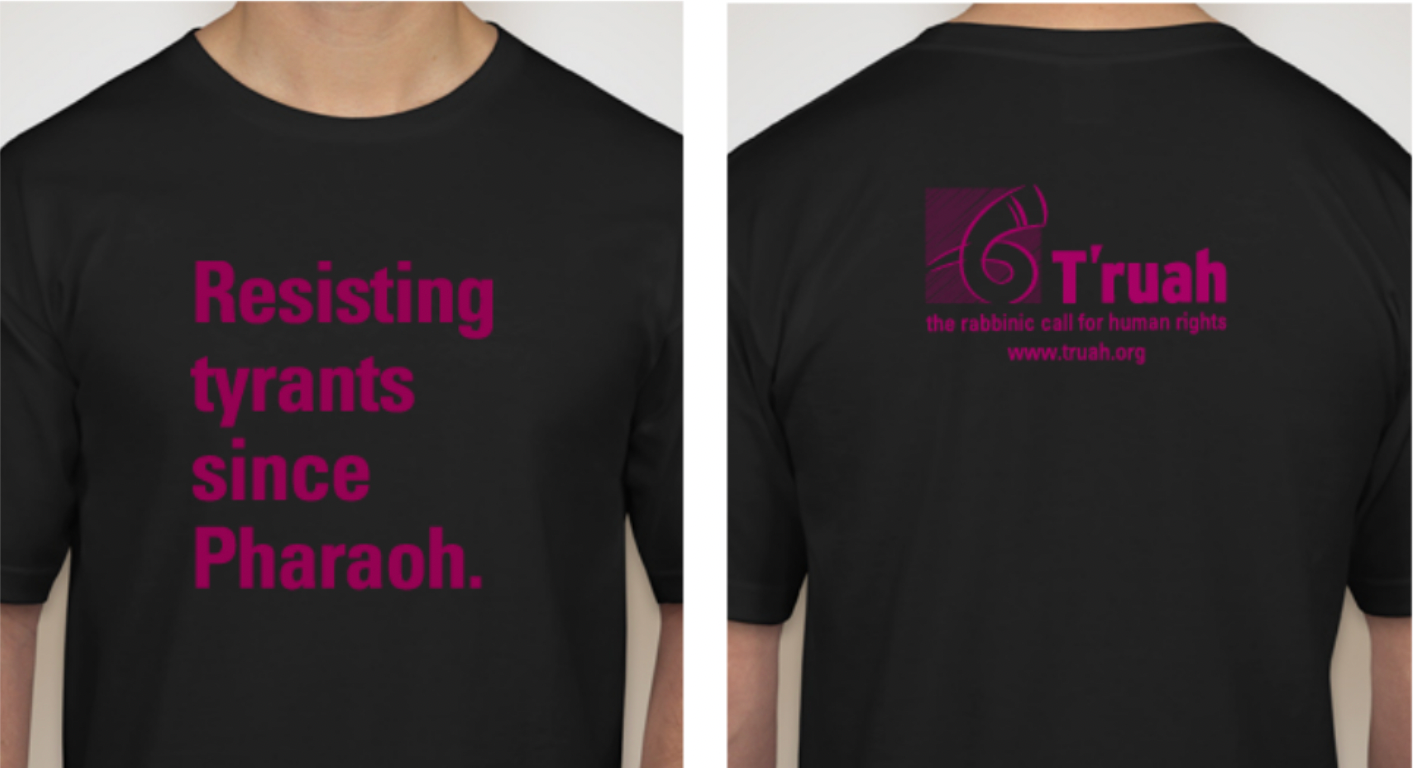 (The mention of Pharaoh conjures a second comparison to a legendary Jewish leader, Moses, who delivered the Israelites from slavery in Egypt; others have likened Zelensky to Mordecai, the Jew who defeats a wicked, murderous leader in the story retold on Purim.)

Meanwhile, David Suissa, the editor of Los Angeles’ Jewish Journal, which frequently decries progressive ideology on its editorial page, wrote that he saw a different element of Jewish tradition reflected in Zelensky’s resolve not to leave his native country.

“Thousands of years after our biblical patriarch Abraham’s poignant cry to God of ‘Hineni’ (‘Here I am’), the ultimate expression of responsibility, a Jewish president in the midst of war uttered a similar message: “Listen. I am here,’” Suissa wrote. “In the face of such courage, it’s hard to think of more essential words to embody the miracle of Jewish survival.”

Suissa connected Zelensky’s leadership to Israel, which he called “the ultimate example of Jews telling the world, ‘Listen, we are here. We’re not running. We’re not hiding.’”

Politics are emerging in some of the Zelensky valorization. In a third and more charged meme, JewBelong, a group that has recently posted provocative billboards in multiple cities drawing attention to antisemitism and what it says is Jews’ need to fight against hatred of them, juxtaposed an image of Zelensky in army fatigues next to the famous image of U.S. Sen. Bernie Sanders sitting with his arms and legs crossed and wearing large mittens at Joe Biden’s presidential inauguration.

“What type of Jew are you?” the meme asked — a message that confused some who saw it but left others with the clear impression that the group, which is ardently pro-Israel, was suggesting that Sanders compared unfavorably to Zelensky.

But for the most part, as Zelensky seemingly single-handedly alters the way the world responds to his beleaguered Ukraine, Jews are expressing one sentiment over and over again.

“The only good thing to come out of this humanitarian crisis is to see such an admirable and heroic Jewish president,” wrote Marion Haberman, who goes by My Jewish Mommy Life online, on Instagram this weekend.

Using the congratulatory Hebrew term meaning “all the honor,” she added, “Kol haKavod to President Zelensky.”