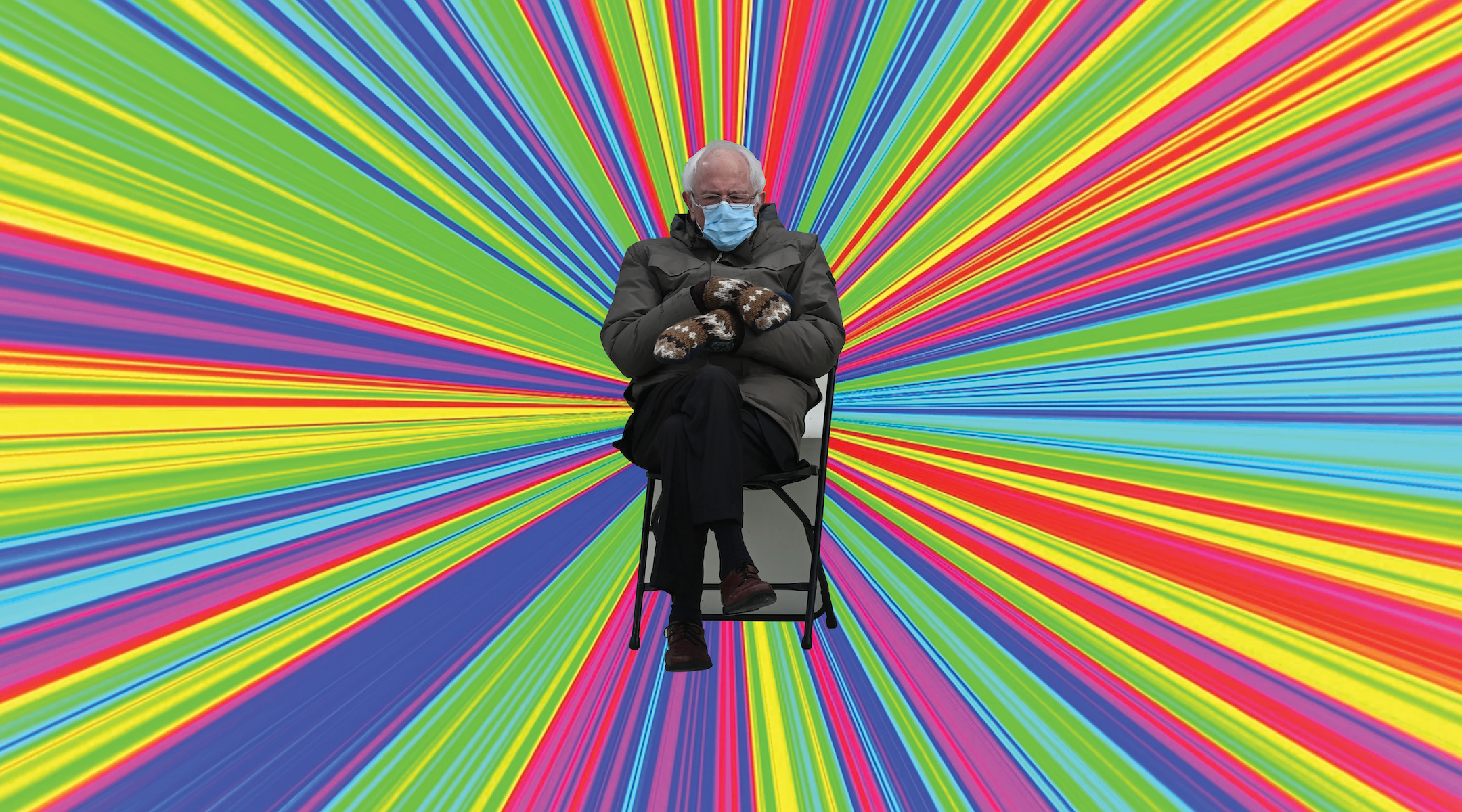 Life-sized cardboard cutouts of the Jewish senator in his now famous inauguration ceremony pose — hands and legs crossed, slightly crumpled in his chair, wearing a pair of fawned-over mittens — sat behind a synthesizer next to the house band, behind the bar for guests and scattered throughout the practically nonexistent audience.

“Speaking of breakout stars of the inauguration, we have another one with us in the studio,” Corden said, barely holding in his laughter.

It was a fitting indication ofjust how ubiquitous Sanders’ image was in pop culture and for the eyeballs of social media this week. No regular Instagram or Twitter user could have scrolled through their feeds since the presidential inauguration on Wednesday without seeing the mittened Sanders — usually in meme form, with humorous accompanying text, often comparing him to cranky relatives and the like.

Many employed Jewish humor along the way.

when you're at a shiva for a guy you didn't like pic.twitter.com/Qy5vOQdiqM

In Jewish yoga this pose is: waiting for my wife at Loehmann's pic.twitter.com/Qik7wsZ0ad

Bernie's just waiting for the shul president to finish announcements so he can go to kiddush already. pic.twitter.com/2MV20rkHEf

Then came the photoshop phenomenon. Social media users began splicing the Sanders’ silhouette into other photos of people and places all over the world, even into screen shots from movies and TV shows.

The #BernieSanders meme combined with kittens may just be perfection 😇 pic.twitter.com/akDxU1H6ZA

Our sister site Alma, not content with one long slideshow of Bernie memes on Instagram, posted three sets of Bernie photoshopped into everything from “Fiddler on the Roof” to “When Harry Met Sally” to a Haim music video.

The meme deluge became so unrelenting that some were fatigued with the image by Friday.

I have Bernie Sanders Meme Fatigue.

An entire market of merchandise inspired by the image has quickly sprouted. The National Museum of Jewish History in Philadelphia is hawking “bundled up Bernie mugs” and more. Designers are incorporating it into their work on Etsy. Sanders’ own online store is now selling a sweatshirt with the image and donating all of the proceeds to Meals on Wheels Vermont. Even the progressive magazine Jewish Currents has its own Bernie merch.

“The mug for a bris, a shiva, a long line at Zabar’s, a protracted and infuriating call with your insurance provider. This isn’t an endorsement of anything other than sitting Like This,” the magazine tweeted.

As with most random internet phenomena, there is no firm answer as to why the image went viral. Sanders has been a social media star before — most notably for the memes based on his December 2019 presidential campaign ad, in which the progressive lawmaker asks his supporters “once again” for donations.

But this photo seemed to capture the essence of Sanders’ public persona as the nation’s grumpy grandfather — and a Jewish one at that, with Ashkenazi features and an unmistakable Brooklyn accent. His homemade wool mittens, a symbol of Sanders’ Vermont style and his repudiation of anything fancy, also fit just a little too perfectly with a senator known for his rants about income inequality. (The gloves have a heartwarming backstory involving a public school teacher that only helped fuel the fire.)

The intensity of the political moment, charged into a new gear after the deadly insurrection at the Capitol — especially for Jews, newly frightened by the display of anti-Semitism at the right-wing riot — likely had something to do with it too. The country, one could argue, was primed for a feel-good meme sensation. As a Refinery29 writer put it, the inauguration was, for the majority of liberal-leaning America, a “sigh of relief.”

Alma’s Emily Burack wrote: “As an Ashkenazi Jew with grandparents from Brooklyn, it’s hard not to feel a kindred spirit in Bernie. And in a year — well, in the past four years, really — when we’ve dealt with a rise in antisemitism, the worst antisemitic attack in American history, and an emboldened faction of white supremacists, the undeniable grumpy Jewishness of Bernie offers a real sense of catharsis.”

Writer Amanda Silbering tweeted that the memes “offered American Jews a chance to heal from the rampant anti-semitism in the news cycle.”

A large part of Sanders’ appeal to his progressive fans has always been his stubborn focus on substantive policy debate and his impatience with the fluff of pop culture. As Refinery29 continued, the cross-legged Sanders photo captured that ethic perfectly.

“He has things to do and places to be. His demeanor is unsentimental, unmoved, and largely unbothered,” Michelle Santiago Cortes wrote.

Sanders’ comedic response to the phenomenon was a Tik Tok video that expressed just that. Its caption: “Fashion? Let’s get to work.” The video showed a clip of him responding to a question about the photo on a news show and what he had “in mind” at the time of the shot.

“$2000 per adult. That’s what the Senate has got to do,” he replies, referring to the debate over how much money the next COVID-19 stimulus relief should include.

But Sanders eventually did have some sense of humor about the whole thing. The timing of the shot, taken as the country watched Joe Biden become president, prompted inevitable musings as to whether Bernie truly was cranky about the event, especially after coming so close to winning the Democratic nomination last year. Sanders, a longtime friend of Biden’s, dispelled those thoughts in an appearance on “Late Night With Seth Meyers” on Thursday night.

“I was just sitting there, trying to keep warm, paying attention to what’s going on,” he said to Meyers with a smile.

As the Biden era begins — without the prospect of a President Sanders, and subsequently no pressing need for Larry David to portray Sanders on “Saturday Night Live” — could this be the end of Sanders’ pop culture stardom?

As one Twitter user wrote: “If @nbcsnl doesn’t have Larry David dressed as @SenSanders in the background of every skit this weekend…then I don’t want it.”