Volodymyr Zelensky was a Jewish comedian. Now the world’s eyes are on him. (JTA) — Four years ago, Volodymyr Zelensky was an actor on the humorous Ukrainian TV show “Servant of the People,” starring as an unlikely president of the Eastern European country.

Now, he is at the center of the continent’s most significant conflict since World War II, framing himself as a possible martyr on the world stage.

“This might be the last time you see me alive,” he reportedly told European Union leaders on a call about steps the bloc was considering to try to stop Russia’s advances throughout Ukraine.

On Friday, he was equally blunt about his situation as Russian troops attacked the capital Kyiv: the “the enemy has identified me as the No. 1 target,” he said in a video message, and his family is the No. 2 target.

But a video of Zelensky and his team defiantly announcing they are staying in Kyiv circulated widely on Friday, as supporters around the world characterized him as a beacon of honor in an age of leaders only interested in preserving their own status.

“We are here. We are in Kyiv. We are defending Ukraine,” Zelensky said. He later batted down an evacuation offer from the United States.

⚡️Ukraine’s Zelensky posts a new video of himself and his team outside the presidential administration in Kyiv’s government quarter after rumors in Russian media that he’d fled. “We are here. We are in Kyiv. We are defending Ukraine.” pic.twitter.com/bgHyrsbVFs

Over the course of a few years, Zelensky — who is the first-ever Jewish president of Ukraine, a country with a long and complicated Jewish history — has quickly become one of the most consequential and prominent Jewish world leaders in recent decades. And given his nonpolitical roots, one of the unlikeliest.

Furthermore, questions about his Jewishness have exploded into the international consciousness: Has his Jewish background put him — or his fellow Ukrainian Jews — in more danger? Has it contributed to the conflict in any way? And why is Russian Vladimir Putin suggesting that he is a Nazi?

Zelensky was born in a Russian-speaking area of eastern Ukraine to Jewish parents, a mother who was an engineer and a father who is a computer scientist. His father’s father, Semyon, served in the Soviet Red Army during World War II; Semyon’s father and brothers were all murdered in the Holocaust.

“He survived World War II contributing to the victory over Nazism and hateful ideology. Two years after the war, his son was born. And his grandson was born 31 years after. Forty years later, his grandson became president. And today he stands before you,” Zelensky said in a speech during a January 2020 presidential trip to Israel, where he appeared with then-Prime Minister Benjamin Netanyahu.

After high school, Zelensky earned a scholarship to study in Israel on the strength of his English scores but turned it down because his father did not want him to go, according to an interview he gave in 2018. Instead, he studied law. but ultimately became a successful comedian, joining a popular comedy group that performed across the former Soviet Union. Along the way, he married a high school classmate, with whom he has two children, a 17-year-old daughter and a 9-year-old son.

By the time Zelensky joined the “Servant of the People” series in 2015, he was one of Ukraine’s most famous pop culture figures.

Zelensky has not elaborated on the details of his Jewish upbringing, or his religiosity, but he also hasn’t shied away from expressing an occasional message of Jewish pride and a strong sense of solidarity with Israel. And that Jewish identity has been repeatedly seized on by enemies and rivals, and celebrated by Jewish supporters around the world.

Ukraine is “one of the few countries that elected a Jewish president,” Oksana Markarova, the Ukraine ambassador to the United States, told the National Coalition Supporting Eurasian Jewry in a webinar on Friday. “I mean, he is Ukrainian in all of his heart, but he’s also Jewish.”

In 2019, several Ukrainian Jews told the Jewish Telegraphic Agency that they were proud to see their country — after its history of anti-Jewish pogroms and Soviet-era persecution — elect a Jewish president.

But many were also worried that if he failed to follow through on the many ambitious promises that boosted him to a sweeping electoral victory — reforming a corrupt political system, standing up to Russia, restoring general confidence in government — that angry citizens could blame his Jewishness.

“When Zelensky fails, they will think of him as the Jew and take revenge against the Jews,” said Yevgeniy Romenovich, a Kyiv resident, said at the time. 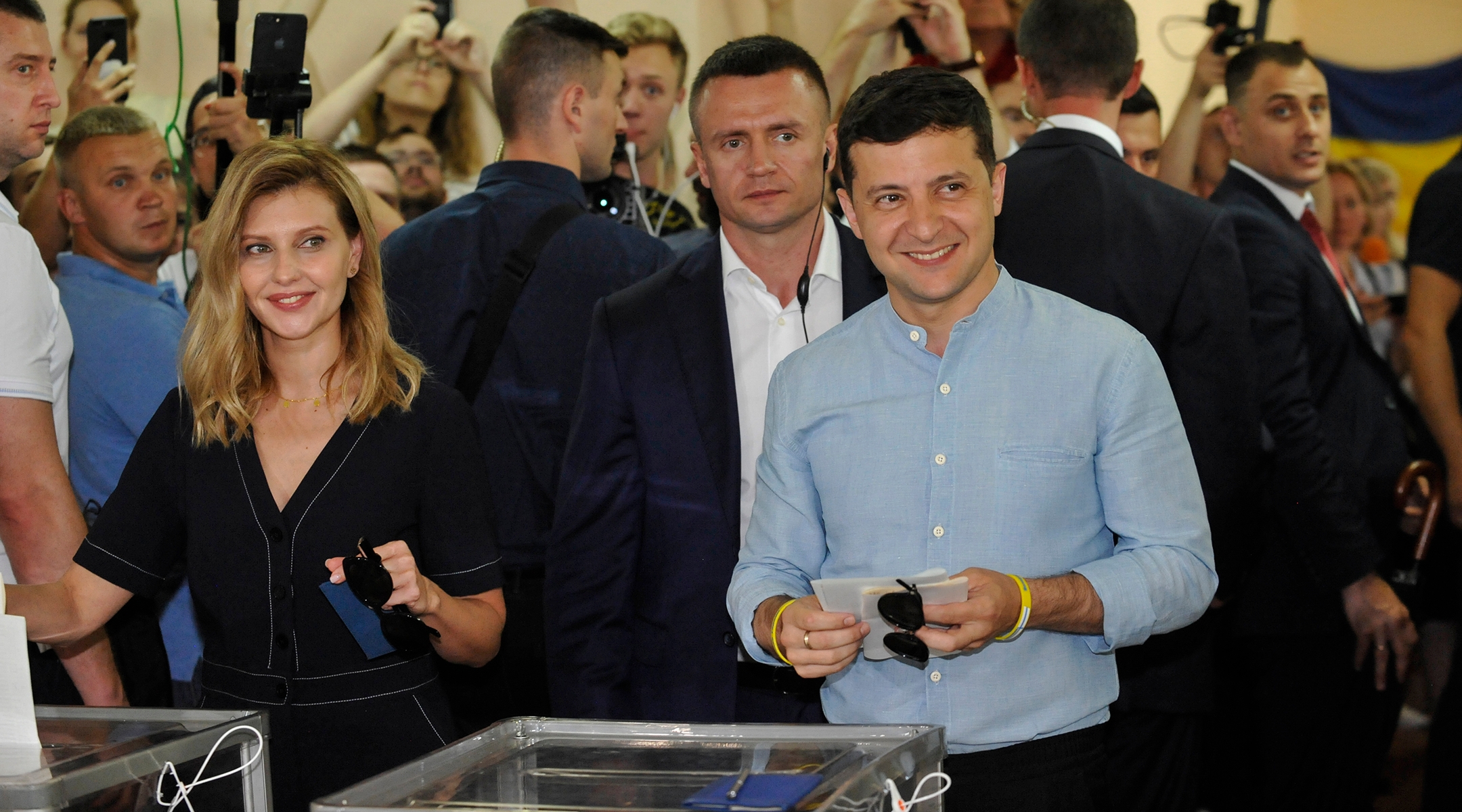 Zelensky and his wife Olena Zelenska at a polling station on election day in Kyiv, May 21, 2019. Zelensky won the election in a landslide. (Sergei Chuzavkov/SOPA Images/LightRocket via Getty Images)

This fear from local Jews has persisted into the early days of the Russian invasion. The senior researcher at the Museum of the Holocaust in Odessa, a city that was over a third Jewish in the 19th century, told The New York Times he was worried that antisemitism would be “unleashed by the chaos of war.”

In a bizarre complication to the narrative, Putin has repeatedly said that his military operation is an attempt to “de-Nazify” Ukraine.

“How can I be a Nazi?” Zelensky said Thursday, without specifically mentioning his Jewishness. “Explain it to my grandfather, who went through the entire war in the infantry of the Soviet army, and died a colonel in an independent Ukraine.”

In a letter to the United Nations last weekend, the U.S. ambassador to the U.N. wrote that intelligence suggests Russia could target “religious and ethnic minorities,” along with anti-Putin activists and other groups, in the aftermath of an invasion. That prompted some to speculate whether that could include Ukrainian Jews.

Other historical figures whose Jewishness featured large in their national leadership include Benjamin Disraeli, the 19th-century British prime minister who was faced unrelenting antisemitism. So did Leon Blum, who faced antisemitic animus in his pre-World War II stints as French prime minister, and whose brief term post-war was seen as a step forward for France’s coming to terms with its Nazi collaborationism.

Lila Corwin Berman, a professor of Jewish history at Temple University in Philadelphia, said questions of loyalty can assail Jewish leaders in times of crisis. She recalled Henry Kissinger, President Richard Nixon’s secretary of state, who faced pressure from some Republicans who wondered if he could be impartial during the 1973 Yom Kippur War, and from some American Jews who feared Kissinger was distancing himself from Israel because of those pressures.

“He came under pressure for essentially not showing the right kind of reverence or respect for Israel that I think some members of the Jewish community wanted him to,” Berman said.

It was typical of the same tensions, she said, that a decade or so earlier had assailed John F. Kennedy, the first Roman Catholic president. The question of loyalty, she said, “gets asked of leaders who are assigned or marked as belonging to a group that is somehow not quite the center of whatever the country is.”

That topic is acutely relevant in Ukraine, a post-Soviet republic with a large population of hypernationalists. Zelensky has toed a line between projecting a strong patriotic front against Russia, and working to delicately stand up to the nationalists who seek to honor former Nazi collaborationists, through statues, marches and other tributes.

It may have proven too difficult to pull off — after winning the 2019 election with over 70% of the vote, his approval rating had plummeted to close to 30%.

The current war is not Zelensky’s first experience as the center of international attention — not long after being elected, he found himself ensnared in former President Donald Trump’s first impeachment scandal, thanks to an infamous White House phone call.

Jonathan Sarna, a professor at Brandeis University and one of the foremost historians on Jewish history, said that whatever the outcome, Zelensky could end up in a pretty singular place in the history books.

“Assuming things continue, we’ll be able to look with pride on a leader who identifies as a Jew and who has been able to articulate a kind of moral stance, and in the face of aggression, and who certainly never hid the fact that he was Jewish but instead takes pride in it,” he added.

And if he’s killed by Russian troops?

“Of course, if he’s martyred — and there are certainly reports that there are agents of the Russian regime who would like either to capture or assassinate him — I think his Jewishness will certainly be noted,” Sarna said.