The Trump-Ukraine controversy, and the Jews involved, explained 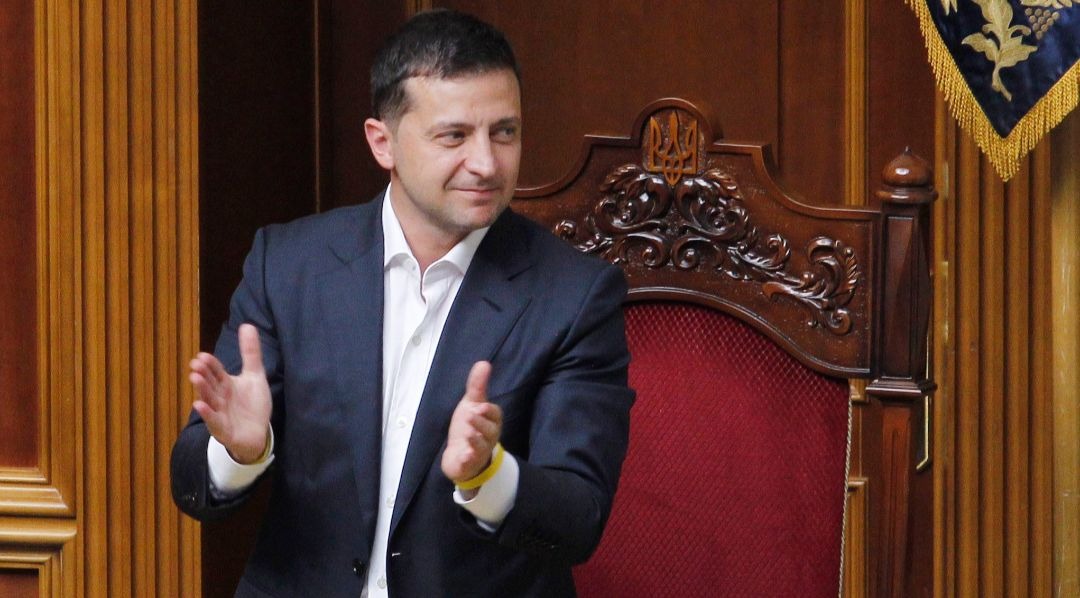 A phone call to Ukrainian President Volodymyr Zelensky, seen here, with President Trump is at the center of a political furor in the United States. (STR/NurPhoto via Getty Images)
Advertisement

WASHINGTON (JTA) — A week ago, impeachment was not the flavor of the season.

The interest in Robert Mueller’s special counsel report into Russian election interference had waned, and the testimony by Mueller before Congress in July failed to advance the narrative much.

President Donald Trump seemed to have come through the controversy politically unscathed.

Then came reports over the past week about the president involving a phone call, an intelligence community whistleblower and an allegation that Trump extorted a U.S. ally for political gain. It has reinvigorated Democratic calls for Trump’s impeachment. Even House Speaker Nancy Pelosi, up to this point reluctant to launch impeachment proceedings, on Tuesday crossed that Rubicon.

“This week the president has admitted asking the president of Ukraine to take actions which would benefit him politically,” she said. “The actions of the Trump presidency revealed a dishonorable fact of the president’s betrayal of his oath of office, betrayal of our national security and betrayal of the integrity of our elections. Therefore today I’m announcing the House of Representatives is moving forward with an official impeachment inquiry.”

Here’s a look at the charges, who the Jewish players are and what the stakes could be.

There are several twists and turns likely to come in this story, but here’s what we do know.

Reports trickled out that an anonymous whistleblower within the intelligence community filed a complaint about Trump in August with the community’s inspector general. The inspector general, Michael Atkinson, deemed the complaint “credible and urgent,” which by law necessitated informing Congress — but the acting director of national intelligence, Joseph Maguire, refused.

It emerged from further reporting that the complaint related to a phone call on July 25 — the day after Mueller testified to Congress — in which Trump pressured Ukraine’s new president, Volodymyr Zelensky, to investigate former Vice President Joe Biden and his son Hunter over ties to a corrupt Ukrainian energy company. Joe Biden is currently leading polls among Democrats seeking to oust Trump next year.

Trump’s personal lawyer, Rudy Giuliani, has been openly pressing Ukraine to investigate the Bidens for months, with State Department assistance. In 2015, at about the same time Hunter Biden was on the board of the Ukrainian company, Ukraine’s top prosecutor, Viktor Shokin, was ousted.

The elder Biden took the lead among Obama administration officials in seeking the prosecutor’s firing, but there is no evidence that he acted on behalf of his son or that the firing of the prosecutor benefited the younger Biden. Trump and Giuliani say the incident reeks of corruption.

Trump acknowledged that he raised the issue of the Bidens and corruption in his call with Zelensky.

Another important piece of context behind the phone call: Trump for a number of weeks had delayed delivering hundreds of millions of dollars in defense assistance to Ukraine that was approved by Congress with bipartisan backing to help protect the country from Russian encroachment.

On Monday, appearing at the United Nations General Assembly, Trump said it was legitimate to use assistance to pressure a country to combat corruption.

“If you don’t talk about corruption, why would you give money to a country that you think is corrupt?” he asked reporters. Trump denied, however, withholding the aid to pressure Ukraine to investigate the Bidens.

That is what has Pelosi sounding more ready than ever to start formal impeachment proceedings — something she has long resisted over fears of a political backlash.

At the heart of the scandal is the relationship between Trump and Zelensky, Ukraine’s youthful president elected in May who is Jewish. Zelensky walks a tightrope between standing up to Russia, cultivating friendships with the West and discussing his identity in a country with an anti-Semitic past.

The former comedian, 41, is a popular figure — the July 25 phone call from Trump was to congratulate him for his party’s overwhelming wins in parliamentary elections. Ukrainians are looking to Zelensky and his cadre of young reformers to deliver a stable government after years of enduring widespread political corruption.

Compounding Zelensky’s challenges is his Jewishness. He shies away from repudiating Ukraine’s anti-Semitic past and from what many see as its lingering anti-Semitism issue. Prior to his election, for example, an influential pundit said that the president of Ukraine should be Christian. He resists delving too deeply into his own Jewishness, joking at one point that “the fact that I am Jewish barely makes 20 in my long list of faults.”

Even prior to the Biden story, Trump was said to be disinclined to assist Ukraine, not wanting to alienate Russian President Vladimir Putin, whom he sees as his more natural ally. But Sen. Chris Murphy, D-Conn., met with Zelensky earlier this month and said Monday that Zelensky “directly” told him during that meeting that he believed Trump was withholding funds over the lack of an investigation into the Bidens.

Schiff, who also has been reluctant to pursue impeachment, now seems ready for the fight. 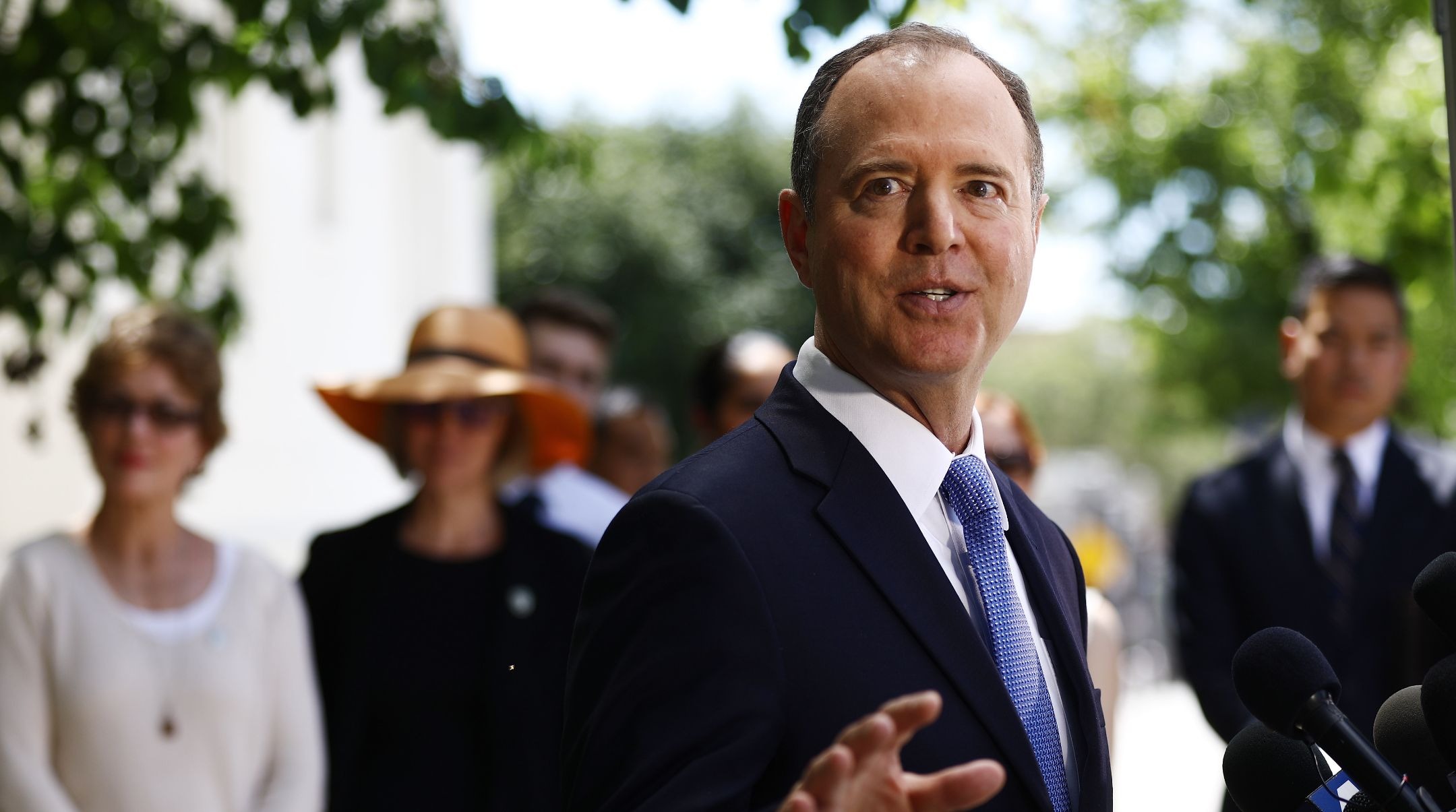 Rep. Adam Schiff, chairman of the House Intelligence Committee, speaks at a news conference in Burbank, Calif., on the release of the redacted Mueller report, April 18, 2019. (Mario Tama/Getty Images)

“This would be the most profound violation of the presidential oath of office, certainly during this presidency, which says a lot, but perhaps during just about any presidency,” he told CNN this weekend.

Nadler was said to be leaning toward impeachment before the Ukraine-Biden news broke, and was frustrated by Pelosi’s resistance. It didn’t help his case that his investigations into Trump appeared to stumble at times. In addition to the Mueller hearing falling flat, Corey Lewandowski, a top outside adviser to Trump, taunted and defied Nadler’s committee at a hearing last week related to the obstruction of justice allegations.

On Monday, Engel, Schiff and House Oversight Committee Chairman Elijah Cummings released a letter to Secretary of State Mike Pompeo demanding information about the extent of assistance provided to Giuliani by the State Department on the Bidens.

Jewish Democrats feature prominently among the freshmen who won swing districts in the 2018 elections — the very group that until now has been wary of impeachment.

Monday evening brought a watershed symbolic moment: Seven of those freshmen, all coming from the national security community, said in a Washington Post op-ed that Trump had crossed a line and they were ready to consider impeachment. Two are Jewish — Elaine Luria of Virginia, a former Navy commander, and Elissa Slotkin of Michigan, a former CIA agent.

“It is clear to me that he has betrayed the public trust and abandoned his obligations to the Constitution by elevating his own interests over the national interest,” Luria said in a separate statement. “Allegations of this gross misconduct meet the threshold of high crimes and misdemeanors set by the Constitution.”