For Ukrainian Jews, having a Jewish president is a source of pride — and fear 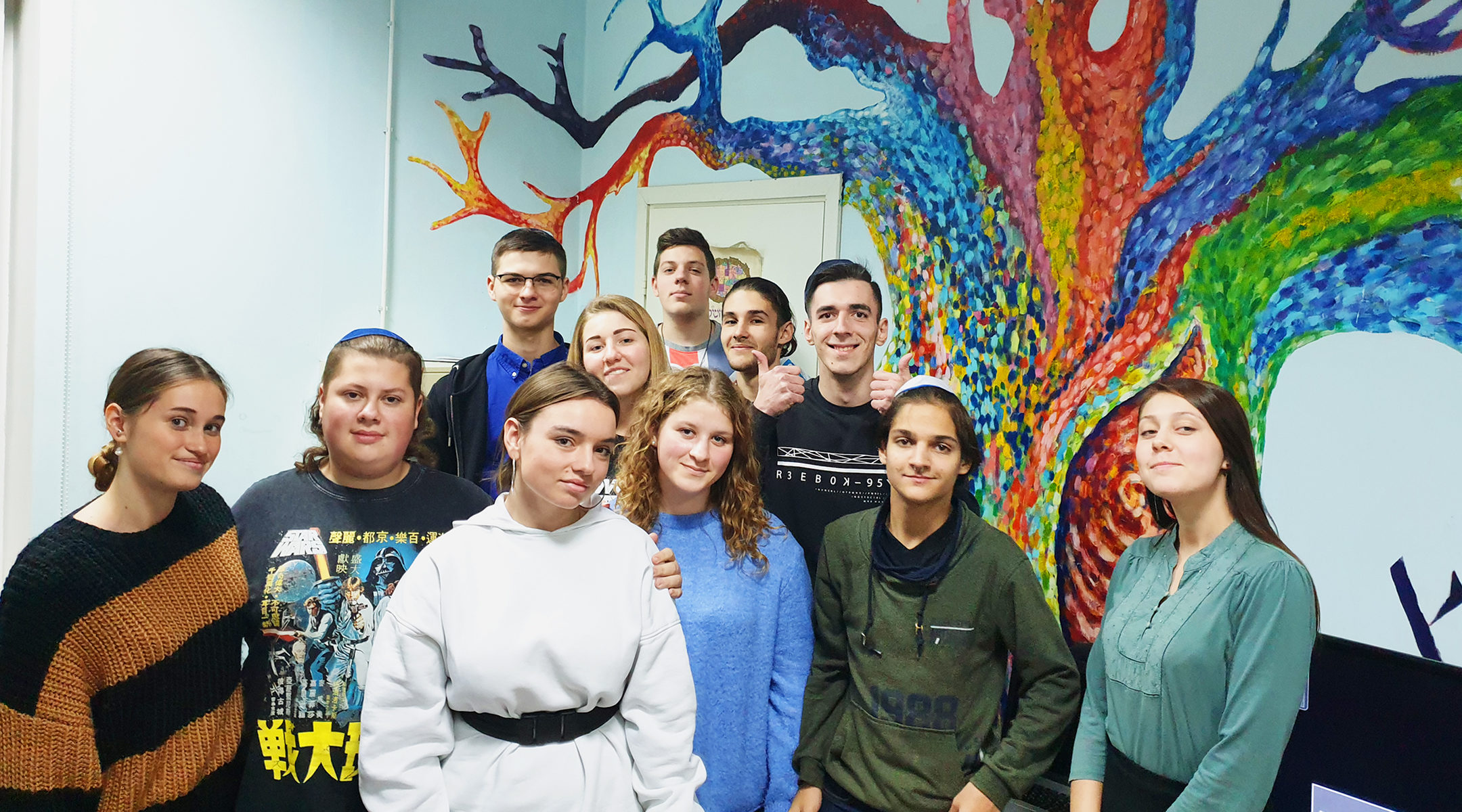 In a war-torn nation losing about 1.2 million citizens each year, where the average monthly salary is about $300, it’s not an unusual decision.

But Kesselman has since changed his mind. The reason? Volodymyr Zelensky’s landslide victory in May’s presidential election.

Zelensky, a 41-year-old Jewish actor with no prior experience in politics — he became famous starring on a TV show as a teacher who unexpectedly becomes president — ran on a campaign based on fighting corruption and ending the territorial feud with Russia.

“I have new hope now,” Kesselman said. “I’m glad a Jewish person can get elected to [be] president here, but I believe he will be successful regardless. I’m staying.”

Kesselman’s confidence in Zelensky, Ukraine’s first Jewish president, is both widely shared — the president enjoys a record approval rating of about 70 percent — and unusual for this country, where none of Zelensky’s predecessors had crossed the 47-point threshold since 2008.

His approval rating among Ukrainian Jews is likely even higher — not only because he is Jewish, but also because he, like them, is a native speaker of Russian rather than Ukrainian. And he’s a centrist with no history of espousing the sort of nationalism feared by many Jews here.

Although Zelensky does not go into detail publicly about his Jewish identity — nor does he hide it — his election also is a symbolic victory for Jews in a country with a bloody history of anti-Semitism. 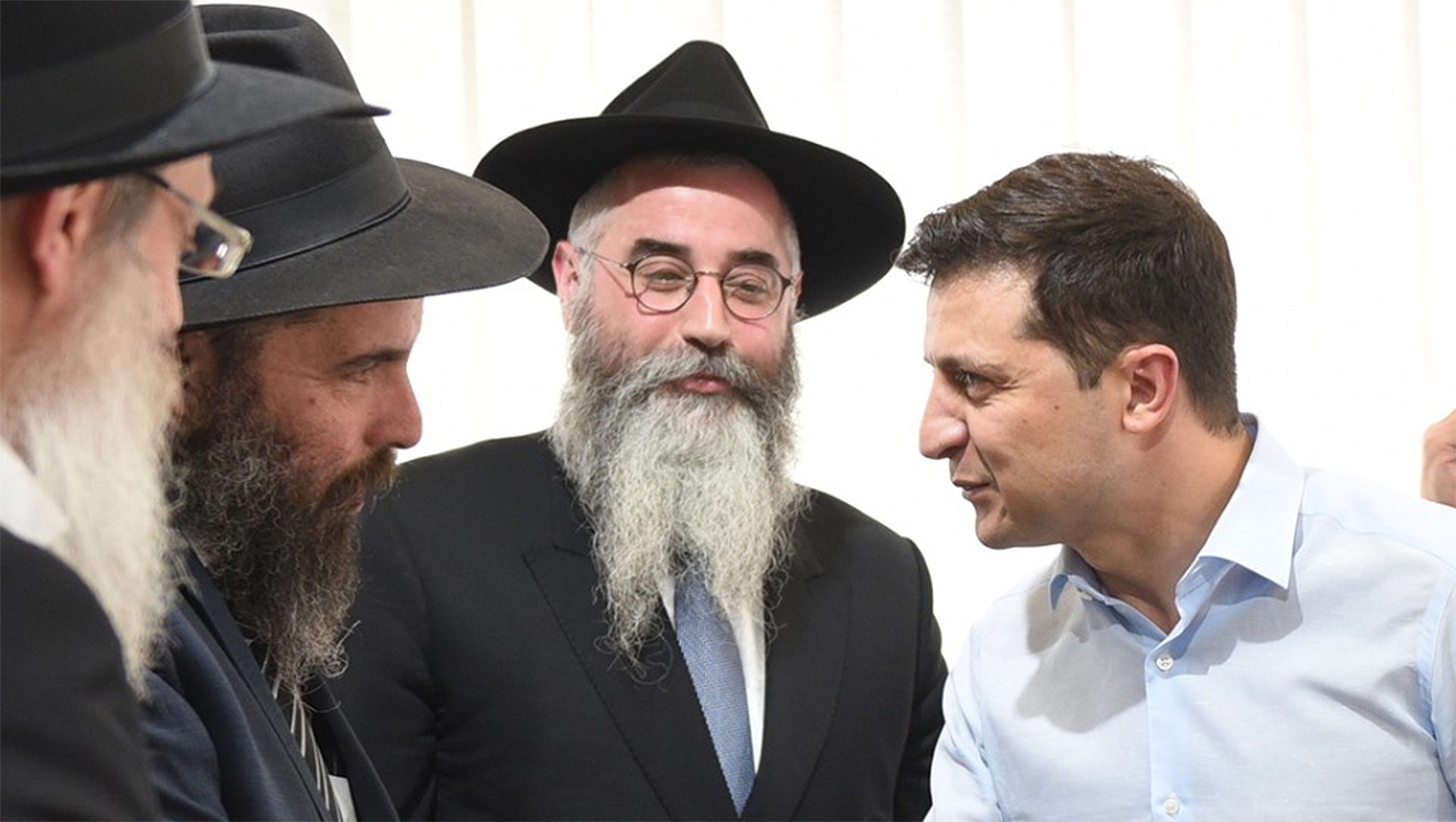 Ukrainian President Vlodymyr Zelensky meets with rabbis in Kyiv, May 6, 2019. (Courtesy of the Jewish Community of Kharkov)

Nevertheless, Zelensky faces enormous challenges. A large part of his appeal stems from his affable speaking style and penchant for defusing conflict with humor, but he has yet to figure out how to balance catering to hardline nationalists and ethnic Russian populations in the country’s east.

On another front, Zelensky is squeezed between the nationalists and promoters of global cosmopolitanism. He’s also pulled back and forth between his anti-corruption agenda and the need to maintain economic stability — in some ways that means cooperating with rival Russia, which historically has been a key trading partner.

In all, it’s a fraught tightrope to walk, and cracks are starting to show.

Just three weeks into his term, dozens of nationalist organizations published an open letter accusing Zelensky of actions that “demonstrate a complete lack of understanding of the threats and challenges facing our country.” The September dismissal by the Zelensky government of Volodymyr Viatrovych, a top state historian that promoted the honoring of Nazi collaborators, didn’t help the president’s cause with the nationalists.

Zelensky’s withdrawal last month from key posts around the Russian conflict line and his decision to allow and honor elections in eastern territories held by pro-Russian rebels also are adding to a nationalist swell that does not bode well for his popularity. Thousands of nationalists rallied last month in Kyiv against the concessions, marking the first major protest against Zelensky.

In a hit to his anti-corruption credentials, one of Zelensky’s allies, the billionaire Igor Kolomoisky, a former governor of the Dnipropetrovsk region, is at the center of a $5.5 billion fraud scandal. Then there’s the specter of the U.S. impeachment scandal, which centers around a phone call between Zelensky and President Donald Trump. Locals, however, say that is mere background noise in everyday Ukrainian society.

“I say this regretfully, but there is no way Zelensky can deliver on his promises, and certainly not on the exaggerated hopes and expectations placed on him by others,” Viktor Skarshevsky, a well-known Jewish economist from Kyiv, told the Jewish Telegraphic Agency. “He’s basically been lifted up to be knocked down.” 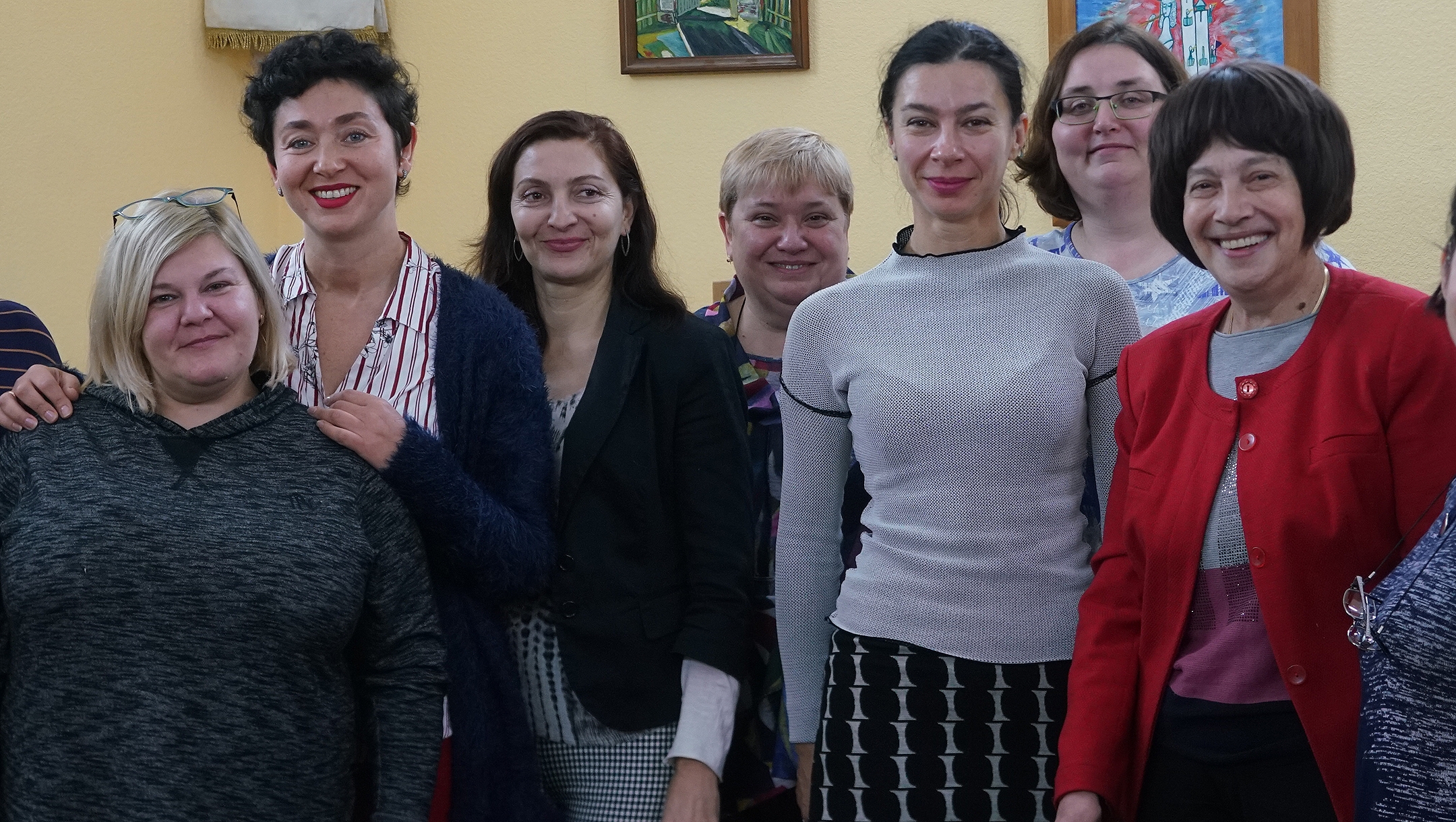 Taking the country’s anti-Semitic tradition into account, some Ukrainian Jews fear that they will end up paying a price if Zelensky fails to deliver, against the odds, on the ambitious campaign goals that have buoyed the novice politician’s popularity.

“Most people don’t think of Zelensky as a Jew, just a popular actor,” said Vlodymyr Zeev Vaksman, the 38-year-old chairman of Odessa’s Tiferet Masorti community. But if he fails, “they will be looking for someone to blame. Maybe Jews.”

“When Zelensky fails, they will think of him as the Jew and take revenge against the Jews,” he said. “As the masses cheer, the Jews should prepare for pogroms.”

Although pogroms have defined the Jewish experience in Ukraine for centuries, they seem an unlikely prospect today in Ukraine, where Jewish communities have been able to thrive since the country’s independence from the Soviet Union in 1991.

After the election in May, Boris Lozhkin, the president of the Jewish Confederation of Ukraine, boasted that Ukraine is “the least anti-Semitic country in Europe.” Elan Carr, the U.S. special envoy to monitor and combat anti-Semitism, called the “absence of anti-Semitic rhetoric during the campaign […] a miracle, a stunning fact that shows how far Ukraine has come.”

Jews were hardly hurt even throughout the 2014 revolution, when the rule of law broke down for weeks amid a resurgence of nationalist sentiment that swept President Viktor Yanukovych from power.

Many Ukrainian Jews can agree with Lozhkin’s positive outlook on Jewish life in Ukraine, where more than 300,000 Jews live, according to the European Jewish Congress.

“Ukraine now is a good place to be Jewish,” said Tsvi Blinder, a curator at the Shorashim Jewish museum in Odessa. “It’s a place of Jewish revival.” 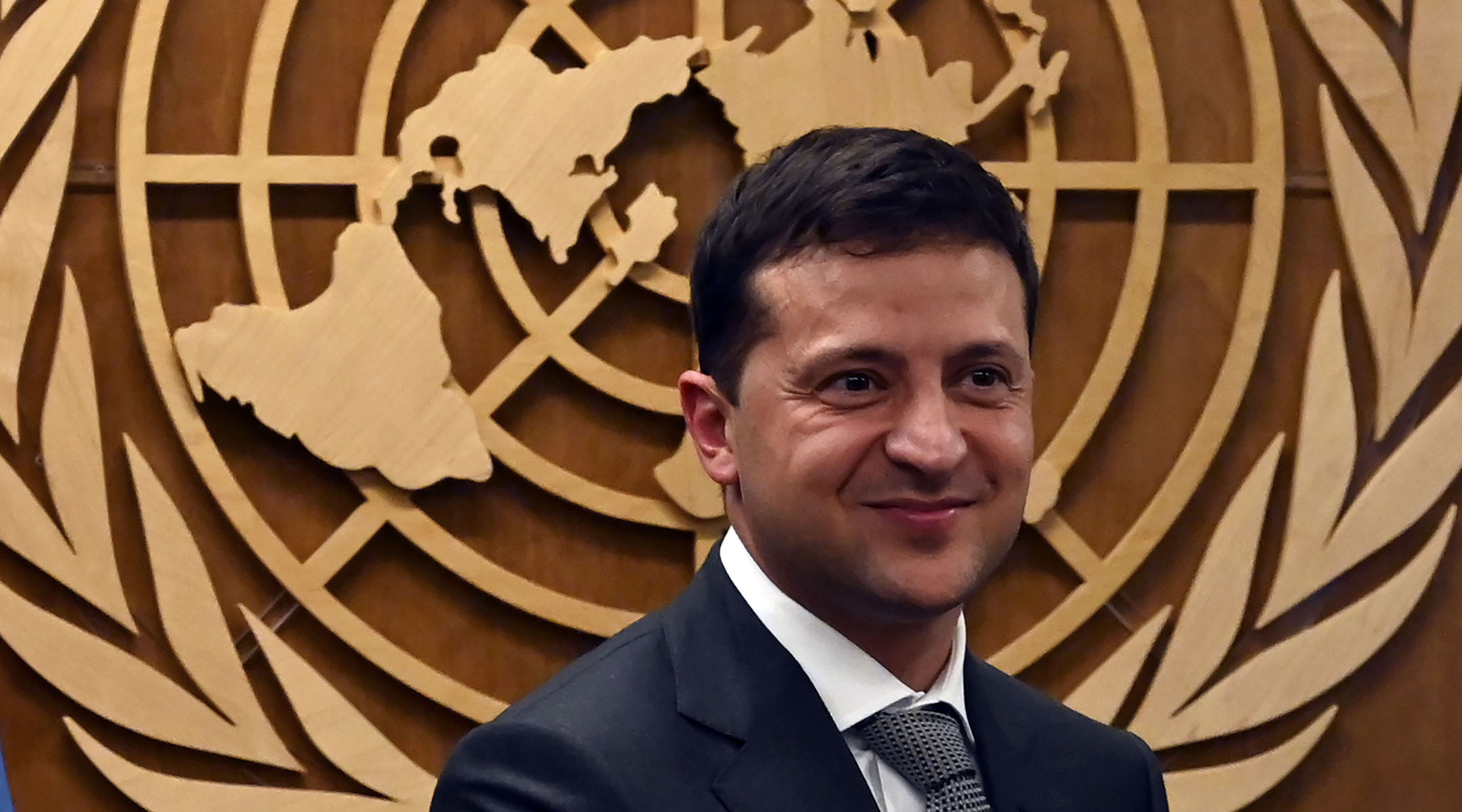 Still, many others on the ground have a different experience.

Kira Verkhovskaya, the director of the Migdal Jewish Community Center in Odessa, told the Jewish Telegraphic Agency that fear of anti-Semitism is part of the reason that she has refrained from advertising the Jewish museum that she heads with any street signs.

“There’s no need to draw too much attention,” she said last week about the museum, an apartment-sized institution located just a few blocks from the sprawling port of this bustling city, where hundreds of Jews were murdered in 1905 pogroms amid communist agitation.

Last month, during a series of nationalist marches, men in fatigues placed an effigy of a the billionaire Kolomoisky, who is Jewish, covered in red paint at the entrance to a synagogue in Kyiv. Kolomoisky owns the television channel that aired the show that made Zelensky famous.

Last year, Israel’s government singled out Ukraine as a regional trouble spot in its annual report for 2017 on anti-Semitism. It found that the approximately 130 anti-Semitic attacks recorded there that year was double from 2016 and surpassed the tally for all the incidents reported throughout the entire former Soviet Union.

“A striking exception in the trend of decrease in anti-Semitic incidents in Eastern Europe was Ukraine,” the report said.

Additionally, in 2018, more than 50 members of the U.S. Congress condemned Ukrainian legislation that they said “glorifies Nazi collaborators.” It is “particularly troubling that much of the Nazi glorification in Ukraine is government-supported,” they wrote.

Regardless of Zelensky’s prospects to solve Ukraine’s many problems, his election represents a milestone in the former Soviet Union, said Chaim Chesler, the founder of the Limmud FSU group, which has organized dozens of Jewish learning conferences in Ukraine and beyond over the past decade.

“In this part of the world, the unwritten rule was that a Jew may sometimes even become deputy district head, but never the actual head of the district,” Chesler said. “Clearly, here this is no longer the case.”