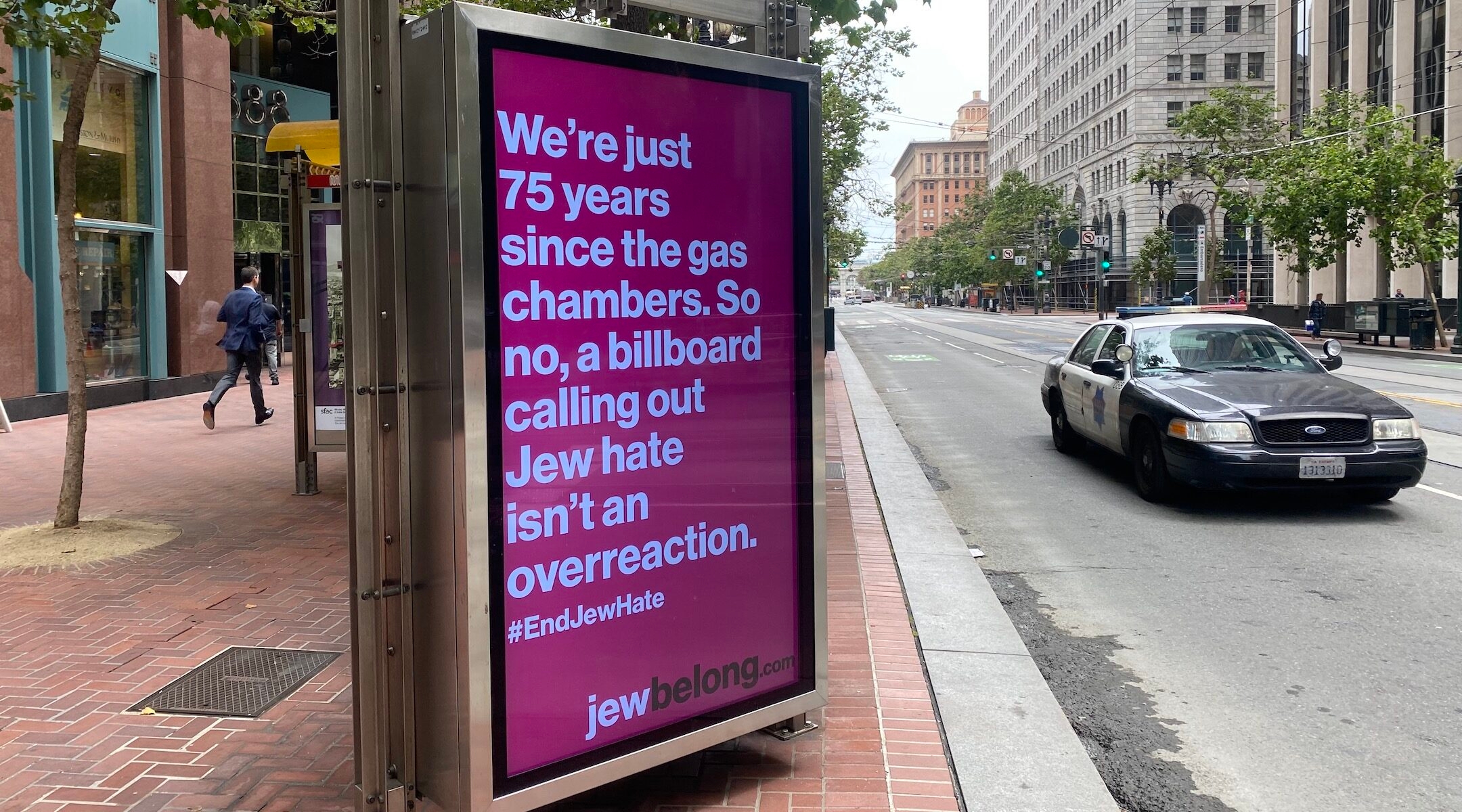 A JewBelong bus ad in downtown San Francisco. The ads are part of a nationwide campaign to raise awareness of antisemitism. (Gabriel Greschler/J. Jewish News of Northern California)
Advertisement

(J. The Jewish News of Northern California via JTA) — Dozens of hot-pink billboards and transit ads have appeared in major American cities over the last month, referencing the Holocaust and antisemitism.

“We’re just 75 years since the gas chambers. So no, a billboard calling out Jew hate isn’t an overreaction,” reads one. “Being woke and antisemitic is like being a vegan who eats veal,” reads another.

The ads are the brainchild of JewBelong, a New Jersey-based nonprofit whose stated mission is to “rebrand Judaism” with a hip, made-for-social-media bent. But now JewBelong is going through a rebrand of its own. Founded in 2017 primarily as a vehicle for increasing Jewish pride among what it deems “disengaged Jews,” the organization has recently shifted its operations to focus specifically on combating antisemitism.

The $450,000 campaign — which is being branded as “JewBelong or JewBeGone” — first made waves with a massive billboard in New York’s Times Square last month. Now, in addition to New York, it’s focusing on San Francisco, Philadelphia, Washington D.C. and Miami, and the group has plans to expand into other markets before the campaign ends in August.

JewBelong founders Stacy Stuart and Archie Gottesman are longtime marketers who made their names with irreverent and often left-leaning advertisements for Manhattan Mini Storage, a company owned by Gottesman’s family. They started out focusing on low-barrier Judaism, like a Zoom Passover seder and online explainers on marriage and baby names.

But Gottesman told the Philadelphia Jewish Exponent that the pair felt it was inappropriate to continue JewBelong’s business as usual — providing rituals, Shabbat songs and recipes — during a time “when people are hating you.”

“If the house is on fire, I don’t want to talk about redesigning the staircase,” said Gottesman.

Stuart said the group is looking to mimic the Black Lives Matter movement for racial justice and the Stop Asian Hate campaign. The latest Israel-Hamas armed conflict, she said, uncovered deep-seated antisemitism that is not getting enough attention.

“We kind of want to take a page from [the Black Lives Matter] playbook. It’s insane they did such a great job of, like, rallying the troops, of just gaining so much attention and so much love,” Stuart said in an interview with J., The Jewish News of Northern California. “And so we’re not doing, like, Jewish Lives Matter … But yes, we are.”

As evidence that the issue of antisemitism needs wider representation, Stuart cited a lackluster showing at a July 11 rally outside the U.S. Capitol; around 2,000 people showed up to protest against rising antisemitism.

Stuart said she is “heartbroken” that Jews are not seeing more support for combating antisemitism.

“Black Lives Matter, we all had the posters on our lawns — like we are there,” she said. “That’s kind of what we do, right, as a people. And we just feel there’s been very little of that for the Jewish community.

“We’re just trying to ring the alarm bells. Where is everyone?”

In San Francisco, where Jewish spaces such as Chabad of Noe Valley and the Jewish-owned Manny’s Cafe were recent targets of anti-Zionist vandalism, the JewBelong billboards carry a special resonance. Stuart said the decision to target the Bay Area was “a no-brainer.” 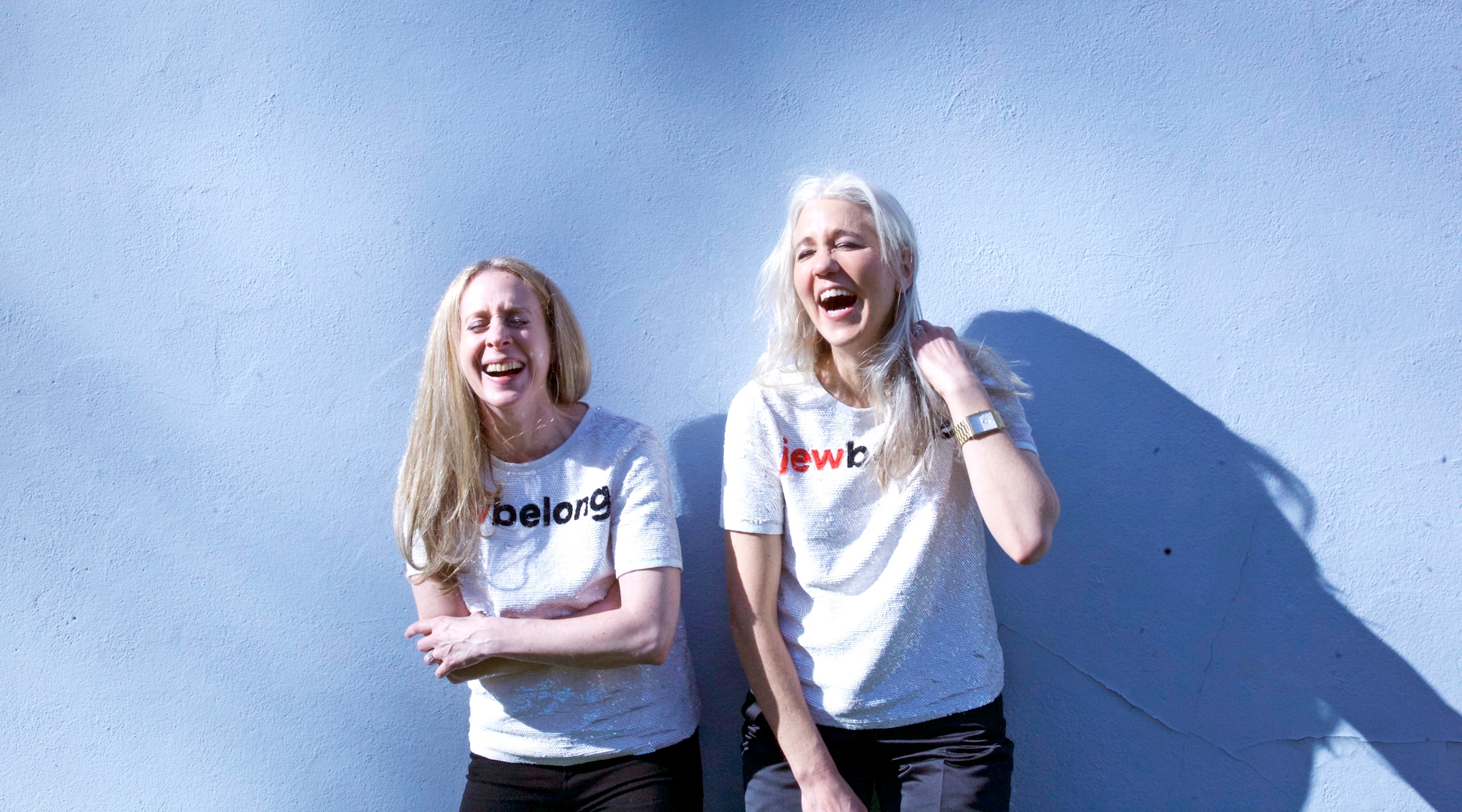 JewBelong founders Stacy Stuart, left, and Archie Gottesman started their branding campaign in 2017 as a way of connecting non-religious and unaffiliated Jews to their Jewish identity. Now they’ve pivoted to addressing antisemitism. (Courtesy of JewBelong)

JewBelong identifies as nonpartisan, but the group has inserted itself into political spaces before. During the 2020 presidential primaries, a group of JewBelong activists in Los Angeles stood outside a Democratic debate site holding placards with a fake quote mockingly attributed to “the alt-right”: “Two Jews running for President? It’s like Charlottesville never happened.”

And when it comes to Israel, JewBelong’s views are unequivocal. The organization has aligned itself with staunchly pro-Israel Twitter personalities, including writers Noa Tishby, Eve Barlow and Hen Mazzig, on the front lines of Internet skirmishes over the Israeli-Palestinian conflict and antisemitism. Echoing a common pro-Israel talking point about the right of Israel to defend itself, one of JewBelong’s signs reads, “You didn’t like it when we didn’t defend ourselves. And you don’t like it when we do. Doesn’t leave much wiggle room.”

Co-founder Gottesman is a prominent pro-Israel figure who sits on the board of Democratic Majority for Israel, a lobbying group that pushes Democratic lawmakers to support pro-Israel policies. In a 2018 Twitter post, she wrote, “Gaza is full of monsters. Time to burn the whole place.” She has since apologized for the statement.

JewBelong also awards “Partisan Prizes,” monetary rewards to people who post regularly about antisemitism on social media, inspired by Jewish partisans who resisted the Nazis during World War II. Partisan Prize recipients tend to be vocally pro-Israel, and many advertise Zionism in their bios. Some Partisan Prize recipients have asked not to be publicly recognized by JewBelong because they said the extra attention has also brought them death threats.

A recent Instagram post from one Partisan Prize winner, who has since deleted their account, shared an image that repurposed a quote from the movie “Mean Girls”: “Stop trying to make Palestine happen.”

Both Gottesman and Stuart said they had, at some point in their adult lives, experienced a disconnect from Judaism, apathy about their Judaism or embarrassment about being Jewish. After Gottesman’s Methodist husband converted to Judaism, she had trouble finding Jewish events that resonated with her, while Stuart felt uneducated about Jewish wedding rituals while preparing for her wedding.

“Judaism is a great product, but the marketing sucks,” Gottesman told the New York Jewish Week in 2020, explaining why she felt compelled to launch JewBelong.

Stuart said Schusterman Family Philanthropies is a significant donor to the JewBelong campaign, but she declined to disclose other funders. (Schusterman also provides funding to the Jewish Telegraphic Agency’s parent organization, 70 Faces Media.)

Joshua Leifer, a contributing editor to the left-wing Jewish Currents magazine, criticized JewBelong’s campaign as having little influence beyond assuaging concerns of donors behind the effort.

“Having a huge billboard in Times Square is a very good way to sell donors that you’re making an impact without necessarily having to prove anything tangible,” he said.

Older American Jews may take comfort in seeing a public affirmation of Jewish identity, Leifer said, and that includes his parents, who he said appreciated JewBelong’s billboard when they saw it in New York. But Stuart’s attempt to lump antisemitism into other racial justice movements is likely to fall flat with young American Jews, Leifer added.

“If they look at this they say, ‘well, we’ve just been in the street maybe protesting, maybe getting tear-gassed, maybe getting beat up by police for Black Lives Matter,’” he said. “The relationship that we’ve observed between Black people, the state and structural discrimination and inequality has no resemblance, essentially, to what American Jews experience.”

Some criticisms of JewBelong’s campaigns have come from observant Jews who believe the organization’s irreverence is insulting to those who follow Jewish tradition. “There is meaning in [t]his religion beyond potato kugel and shlishkes,” Hadara Zemel, a Jewish resident of New Rochelle, New York, wrote in response to the 2020 New York Jewish Week story about the organization. “[The billboards] serve no purpose other than to make us a laughingstock once again… Do [JewBelong’s founders] even know what [they’re] proud of?”

But pro-Israel groups have given high marks to the group’s current antisemitism awareness campaign. Roz Rothstein, co-founder of StandWithUs, which has sponsored national pro-Israel advertising campaigns, praised the JewBelong initiative as a “one of many steps that can help fight the virus of hate.” This is the goal that JewBelong’s founders hope will resonate with supporters.

“We’re trying to be a voice out there for a community of Jewish people [that] doesn’t necessarily feel seen or supported,” Stuart said.

This story was originally published in J. The Jewish News of Northern California, with additional material from the Philadelphia Jewish Exponent. Reprinted with permission.