On Capitol Hill, rally-goers agree that antisemitism is un-American. But when Israel is involved, it gets complicated. 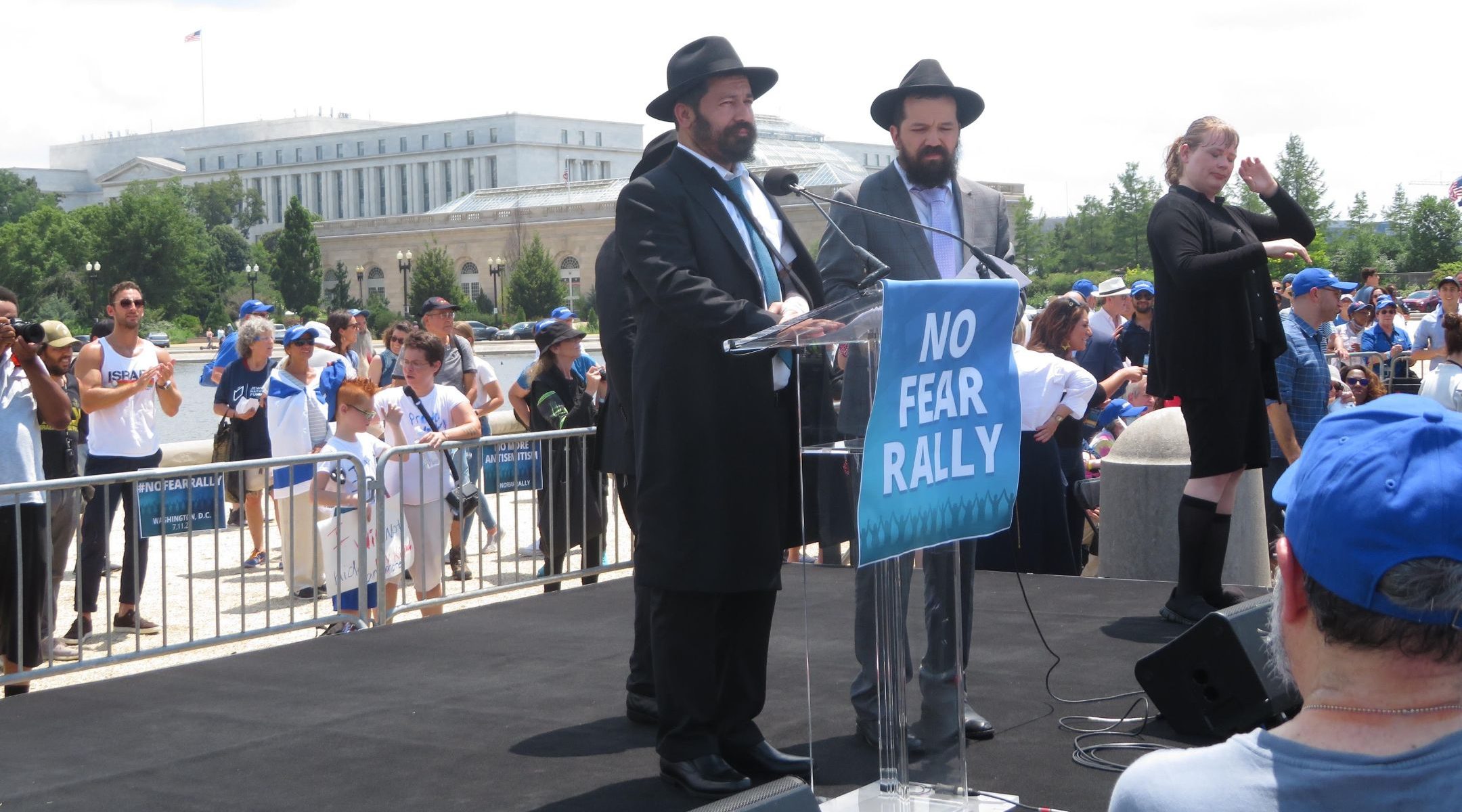 Shlomo Noginski, a rabbi who was stabbed in Boston, speaks to a rally against antisemitism at the U.S. Capitol in Washington, D.C., July 11, 2021. (Ron Kampeas)
Advertisement

WASHINGTON (JTA) — Several thousand people spent a sweltering afternoon in front of the U.S. Capitol at a rally on Sunday that denounced antisemitism as un-American and made the case that Jewish identity and support for Israel are inextricable.

Those were the unifying messages of the “No Fear” rally on Sunday, which drew about 2,000 people, but there were differences among the speakers and in the crowd on how precisely Israel figures in the fight against antisemitism.

Some of the most searing messages came from people who have suffered antisemitic attacks in recent years. A recurring theme among these speakers was that they never expected to suffer such attacks in the United States. Chabad-Lubavitch Rabbi Shlomo Noginski, who sustained stab wounds in a July 1 attack in Boston, appeared with his arm still in a sling, and in evident pain.

“I was born in the Soviet Union in the city of St. Petersburg,” Noginski said in Hebrew, having explained that he was still too pained to speak fluently in English. “I remember how even as a young child, I experienced terrible antisemitism. Never in my darkest dreams did I imagine that I would feel the same way here in the United States, the land of freedom and endless possibilities.”

The crowd shouted “hero!” as Noginski spoke. He had held the attacker at bay outside a Chabad facility where about a hundred children were in summer camp.

Another speaker hailed as a hero was Rabbi Jeffrey Myers, who described saying the viduy, the Jewish prayer before death, as a gunman shot 11 worshipers dead in the Tree of Life synagogue in Pittsburgh in October of 2018. Myers was the first to alert the police of the attack.

“‘We hold these truths to be self-evident that all men are created equal, that they are all endowed by their Creator with certain unalienable rights, among them life, liberty and the pursuit of happiness,’” Myers said, quoting the Declaration of Independence. “To be an antisemite means you do not accept that pact of being an American.”

The rally drew a broad array of sponsor organizations, covering the religious spectrum and many right-wing and central pro-Israel mainstream Jewish organizations.

Notably absent were representatives of more left-wing groups that were asked to join but opted out of attending because some of the sponsoring groups adhere to a definition of antisemitism that encompasses harsh criticism of Israel, including the movement to boycott, divest and sanction Israel. Groups like J Street and Americans for Peace Now oppose BDS, but object to defining it as antisemitic.

Melissa Landa, who leads the Alliance for Israel, a relatively new group that has as a central tenet that BDS is antisemitic, set the tone at the outset of the event. She had launched plans for the rally after antisemitism spiked during the Israel-Gaza conflict in May.

She spoke of the “shared promise for our children, that they will be free to live as proud Jews, and exercise their religious liberties granted by the United States Constitution, free to wear their yarmulkes and Magen Davids and free to speak their love of Israel without being attacked in the streets of New York or Los Angeles.”

Landa, like other speakers, named lawmakers on the left or the right that have in recent months incurred accusations of antisemitism. Mentions of Rep. Ilhan Omar, a Minnesota Democrat whose criticism of Israel has been seen by Jewish groups as crossing into antisemitism, notably garnered much louder boos than those of Marjorie Taylor Greene, a Georgia Republican who has drawn fire for peddling antisemitic conspiracy theories and for likening coronavirus restrictions to Nazi laws.

Noa Tishby, an Israeli actor, appeared with conservative pundit Meghan McCain and Alma Hernandez, a Democratic state lawmaker in Arizona. Each suggested that anti-Zionism was equivalent to antisemitism.

“So much of the antisemitism of today simply attributes all the evil tropes, lies and libels that have been used for centuries to justify the worst horrors against Jewish people to the Jewish state,” said Tishby, who is well known in Israel and recently published a book titled “Israel: A Simple Guide to the Most Misunderstood Country on Earth.” “As you will hear today, this hatred is being used to attack our Jewish communities. It is being used to impose a heavy cost on anyone who identifies as Jewish or even God forbid, Zionist.”

McCain has become an outspoken defender of Israel on the talk show “The View” — which she announced earlier this month that she is leaving — and elsewhere.

“I’m Meghan McCain and I’m a Zionist because, apparently, this is now something that is controversial to say,” she said at the rally. 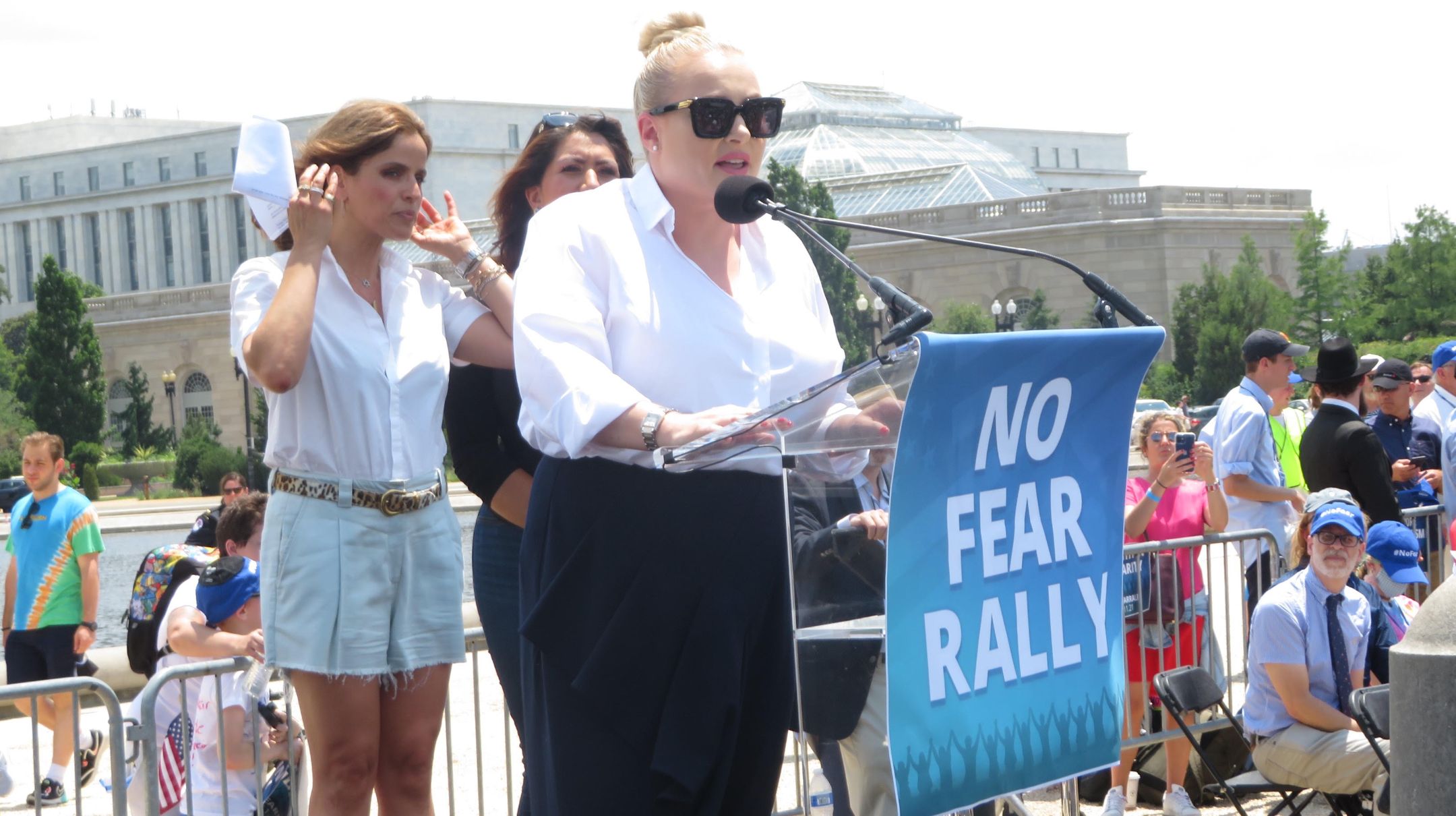 Elisha Wiesel, the son of the late Holocaust diarist and Nobel Peace Laureate Elie Wiesel, had joined the planning of the rally to bring in mainstream and liberal-leaning groups after Landa hit a wall in bringing them in.

Major mainstream groups like the Anti-Defamation League, the American Jewish Committee and B’nai B’rith International, as well as the Orthodox Union and Reform and Conservative movements, signed on as sponsors, but few of their representatives spoke.

Wiesel said he feared division but was soothed by the unity he saw.

“The sages teach that it was our own hatred for each other that caused the destruction of the first and second temples,” he said. “And in the weeks leading up to this rally, it was this fear that dominated my field of vision, the fear that our community was divided beyond repair. That fear is our enemy’s dream. But looking out at all of you today if it comes clear that instead of dividing us, the enemies of the Jewish people, whether from the right or the left at home or abroad, they have instead united us.”

Wiesel appeared to nod to the concerns that some liberal groups had — that criticism of Israel and support for the Palestinians would be conflated with antisemitism at the rally.

“We can disagree even passionately, without being divided. We can even disagree on Israel,” he said. “ We must not tolerate calls for an end to the Jewish state of Israel, through a one-state solution that once again leaves the Jews defenseless. We must also not tolerate denigration or hatred towards the aspiration for dignity and self-determination of our Palestinian cousins. If we hate, we will not win.”

Just minutes after his own speech, Wiesel jumped in to intervene and help out a fellow speaker — Erika Moritsugu, a deputy assistant to President Biden, who was representing the White House, and was booed. A cluster of supporters of former President Donald Trump shouted during her speech, particularly when she mentioned that President Joe Biden decided to run after the deadly 2017 neo-Nazi march in Charlottesville. Trump equivocated in condemning the marchers, which has become a sore point among his followers.

“Stolen election!” one man shouted. “You pay money to terrorists!” said another. One held up a placard saying “Screw Kristen Clarke.” Clarke, who leads the civil rights division at the Department of Justice, came under fire during her confirmation hearings for having hosted an antisemitic speaker when at an event when she was a student at Harvard decades ago.

Moritsugu appeared flustered and others in the crowd shushed the booers. After she finished speaking, Wiesel stepped in and said, to applause, “I’d like everybody to thank President Biden for the way that the White House stood with Israel during the Gaza war.”

“I am here today to express my support for the Jewish community in the face of antisemitism, in the face of the shooting deaths and attempted murders in synagogues, stores and homes,” he said. “Now is a time of solidarity. Now there’s a time of unity.”

A couple from Kensington, Maryland, Bruce and Malka Kutnick, were unnerved by the presence of the far Jewish right at the rally. Malka Kutnick said she had been reassured by Wiesel’s claim before the rally that both people who don’t care about Israel’s existence and Kahanists — followers of the late extremist Rabbi Meir Kahane — would not be welcome. She held a placard that read “No to occupation, No to antisemitism.”

“I was just accosted by someone in a Kahane shirt,” she said. “He said I should stand with the Netorei Karta.” A small cluster of that fringe group, which is both haredi Orthodox and anti-Zionist, gathered on a green across the street.

She said she felt untethered from the progressive movement, which she otherwise supports.

“The issue is that in this country as of late, I don’t feel as though anyone like me can exist in a progressive space anymore without checking my intersectionality at the door,” she said. “When I am asked to be part of myself as I show up to these spaces, the gap is closing. There’s nowhere for people who want to be American, the way I do.”