A rally against antisemitism hopes to present a united front, but its message on Israel has driven away some left-wing groups 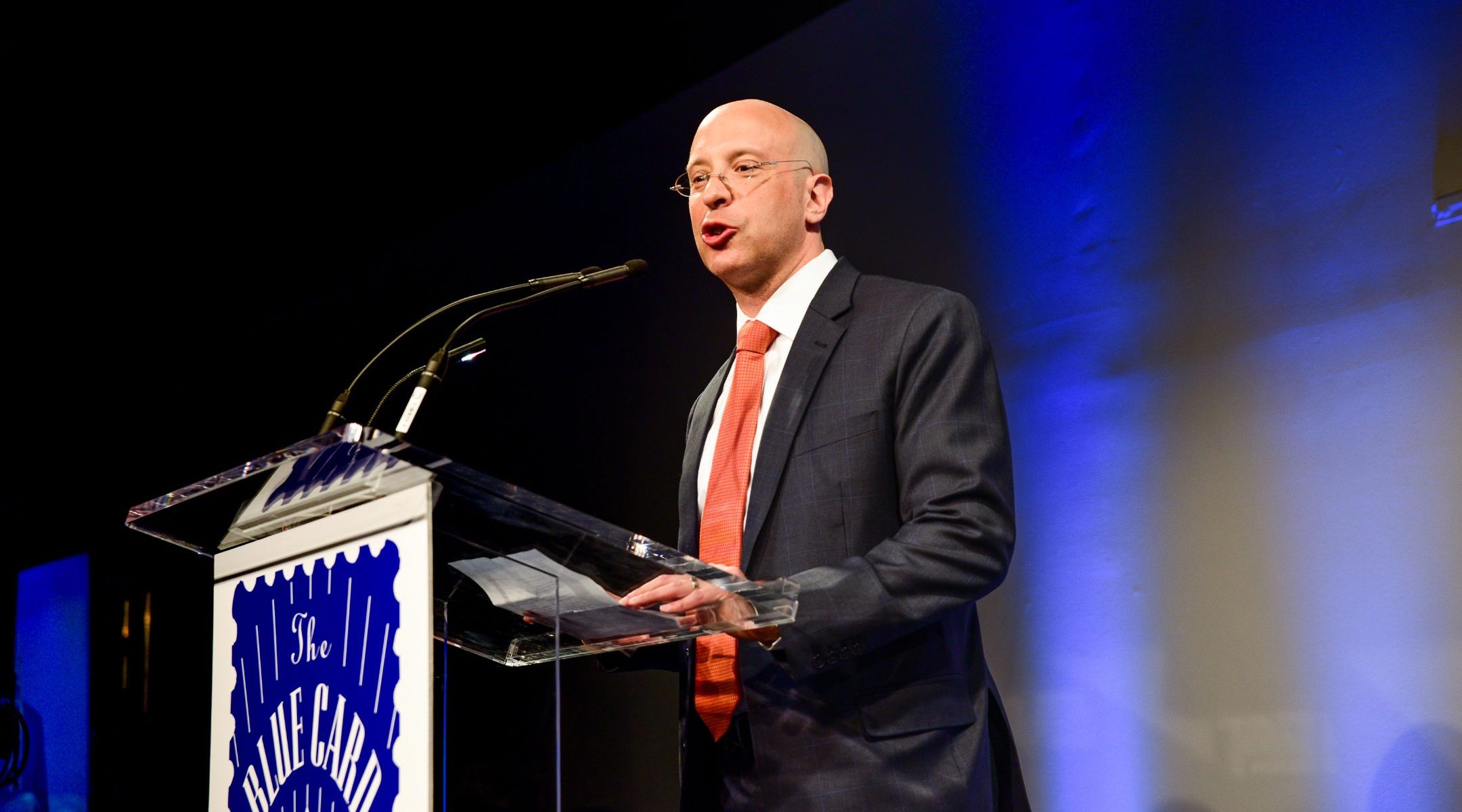 WASHINGTON (JTA) — Israel will feature large in a Jewish organizational rally against antisemitism, with the goal of uniting the Jewish community following a wave of attacks.

But the rally’s messaging on Israel has led a number of left-leaning Jewish groups to demur from participating. It’s a signal of both how fraught an issue Israel remains in the American Jewish community, and of how divided the community is regarding whether and when to classify attacks on Israel as antisemitism.

Elisha Wiesel, son of the late Holocaust diarist and Nobel Peace Prize laureate Elie Wiesel, was instrumental in bringing together a wide array of groups for the rally Sunday, which will be held outside the United States Capitol in Washington, D.C. The rally is called “No Fear: A Rally in Solidarity with the Jewish People.”

Wiesel said it was critical to make attacks on Israel, and not just antisemitism, a focus of the rally. The antisemitic attacks in U.S. cities that occurred during and after Israel’s conflict with Gaza in May bound one into the other, he said.

“Bombs were falling on our brothers and sisters in Israel, and we were being attacked on streets in New York and restaurants in Los Angeles,” Wiesel told the Jewish Telegraphic Agency. “I made a vow to myself, the next group that raised their hands, I would call them and offer to raise funds.”

The group that approached him was a new and relatively unknown one, Alliance for Israel, founded in 2019 by Melissa Landa, a pro-Israel activist and former education professor. The group’s focus appears to be opposing the movement to boycott, divest and sanction Israel.

Landa, who declined a request for an interview, at first had only a handful of groups, mostly from the right, signing on to join the rally. Wiesel was key to recruiting mainstream Jewish groups. The organizers also brought on Steve Rabinowitz, a public relations specialist with deep experience working for Democrats, Jewish groups and progressive groups.

Now, a who’s who of establishment Jewish organizations have become cosponsors. They include all three major Jewish denominations, the Jewish Federations of North America, the Anti-Defamation League, the American Jewish Committee and the leading Republican and Democratic Jewish groups.

“The precipitous rise in antisemitic attacks across the country, some violent, linked with growing protests against Israel, cannot be ignored,” Alan Ronkin, the director of the American Jewish Committee Washington, D.C., region, said in an email. “Antisemitism is a societal problem, and the No Fear Rally will bring together the Jewish community and our allies to jointly express outrage and demand meaningful action.”

But Rabinowitz said he hit a brick wall with a few large left-leaning organizations — including J Street, T’ruah and Americans for Peace Now, which declined invitations to cosponsor the rally. A number of other groups on the left whose representatives declined to speak on the record got wind of the rally through email blast solicitations and decided against participating.

Rabinowitz, speaking only for himself and not for the organizers, said Israel has become too divisive an issue among Jews, and he wished the organizers opted to solely focus on antisemitism in order to create a more potent message.

“We can have an agreement on antisemitism, but there are a million differences on Israel,” he said. “I wish we could leave that debate for another day.”

A spokesman for J Street declined to comment on why the group did not participate.

Hadar Susskind, American for Peace Now’s president, said the gulf was too wide between groups like his and sponsors on the right such as the Zionist Organization of America and StandWithUs.

He cited as an example how those groups describe the movement to boycott, divest and sanction Israel, known as BDS, as antisemitic. The principal organizer, Alliance for Israel, mentions “the destructive antisemitic lies of the BDS movement” on its “About Us” page.

Susskind said his group does not back BDS, but objected to defining it as antisemitic. “This rally looks like it will conflate criticism of the occupation and criticism of Israeli actions with anti-Zionism, and will say anti-Zionism is antisemitic, and we want no part of that,” he said.

The sense that the organizers were conflating criticism of Israel with antisemitism was the reason a number of other left-wing Jewish groups did not sign on, according to people with knowledge of the cosponsoring process. Insiders said that a number of groups were appalled by the posters one of the sponsoring groups, the Israel Forever Foundation, distributed with publicity for the rally: It was a depiction of the Israeli flag superimposed on a map of Israel, the Gaza Strip and the West Bank, without distinguishing between the entities.

Still, a number of progressive and centrist groups did sign on, including member organizations of the Reform and Conservative movements, the Jewish Democratic Council of America and the National Council of Jewish Women. The Jewish Council for Public Affairs, which advocates liberal policies domestically, is a sponsor, as are a number of its constituent Jewish Community Relations Councils. Rabbi David Saperstein, a respected Reform leader and a former religious freedom ambassador appointed by Barack Obama, is a speaker.

It’s a significant get for the rally, because in recent years the two groups have incessantly ripped into one another on social media, each accusing the other of soft-pedaling antisemitism on its side of the aisle.

In interviews, Klein and Coleman said they saw value in Wiesel’s point about uniting in the face of a common threat.

“Democrats and Republicans should be doing what we can to end the scourge of antisemitism, to slow it where it’s growing,” Coleman said.

Klein called the rally “a show of common interest.” Like Coleman, he said that each party should be responsible for calling out antisemitism in its ranks. “Political parties are no different than anyone else, we have to make sure antisemitism is stifled and not the norm in the United States,” he said.

Wiesel said his red lines were right-wing extremists who call for the expulsion of Arabs from Israel, and anti-Zionists. “We don’t want haters and we don’t want one-staters,” he said, although some sponsors, like the Israel Forever Foundation, appeared to favor a single Jewish state covering Israel and the West Bank. “If you’re a Kahanist, or if you say it’s okay if Israel goes away, you’re not welcome.”

He said not to expect the crowds that Jewish rallies have historically brought to the National Mall, noting the 250,000 believed to have attended a 1987 rally for Soviet Jewry and the more than 100,000 who rallied in 2002 while Israel was in the throes of the Second Intifada. Elie Wiesel appeared at both of those rallies.

“There are a lot of things not ideal about this rally,” including the relatively short notice, he said. “Doing anything in D.C. on a hot Sunday with all the kids in camp [and] so many people out on vacation was never going to be easy.”

But he said that after years of division over Israel, it was critical for the Jewish community to come together, and project agreement that Israel is critical to Jewish security, however much organizations differ on its government’s actions or its borders. Jews had been riven in recent years over disagreements on the Iran nuclear deal brokered by former President Barack Obama, and then by how Trump and Israeli Prime Minister Benjamin Netanyahu politicized support for Israel, Wiesel said.

“After the Iran deal completely divided us under Obama, and after four years of Netanyahu and Trump making people feel they were not comfortable with Israel, we lost the idea that there should be an Israel and it should live in peace and security,” he said.

Presenting that united front was key to garnering allies outside the Jewish community, Wiesel said. A few famous non-Jews will be speaking, including Meghan McCain, a prominent conservative, and Derek Black, a former white supremacist.

“I couldn’t wait another minute to heal the divisions in the Jewish community and come together to stop these unbelievable antisemitic attacks that started after the Gaza war,” Wiesel said.