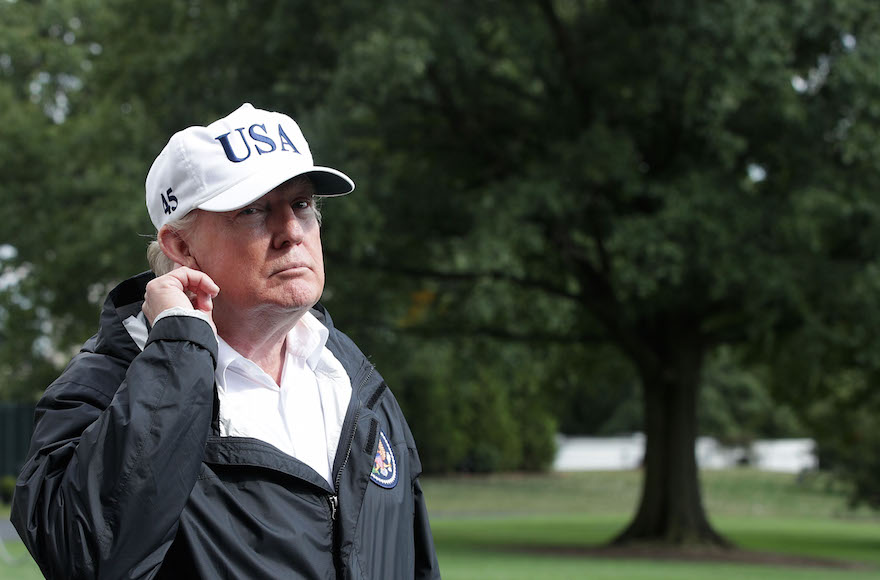 President Donald Trump listening to a question from a member of the media after he returned to the White House from Florida, Sept. 14, 2017. (Alex Wong/Getty Images)
Advertisement

WASHINGTON (JTA) — President Donald Trump reiterated that both sides — white supremacists and those who opposed them — were responsible for the deadly violence at a far-right rally last month in Charlottesville, Virginia.

Trump, speaking Thursday on Air Force One as he returned from Florida, where he was meeting with victims of Hurricane Irma, described his meeting a day earlier with Sen. Tim Scott, R-S.C., an African-American Republican who has been critical of Trump on race-related matters.

“I think especially in light of the advent of antifa, if you look at what’s going on there, you know, you have some pretty bad dudes on the other side also,” he said when asked what he told Scott regarding the deadly Aug. 12 violence in Charlottesville. Antifa is a loose coalition of leftists ostensibly organized to protect protesters but which has lashed out violently at times at its perceived enemies.

“And essentially that’s what I said,” Trump said. “Now because of what’s happened since then, with antifa, you look at, you know, really what’s happened since Charlottesville,” he said, apparently referring to clashes between antifa and right-wing protesters in Berkeley, California, on Aug. 27. “A lot of people are saying — in fact a lot of people have actually written, ‘gee Trump might have a point.’ I said, you got some very bad people on the other side also, which is true.”

Trump’s equivalence on the Charlottesville violence has outraged Jewish groups, Jews in his Cabinet and lawmakers from both parties.

Antifa represented a small minority of the mostly peaceful counterprotesters in Charlottesville. There were limited skirmishes between its members and white supremacists protesting the planned removal of a statue honoring Confederate Gen. Robert E. Lee. Among the 500 or so white supremacists, neo-Nazis and members of the Ku Klux Klan, many were armed and some sought out counterprotesters to attack. Some carried Nazi flags and shouted racist and anti-Semitic slogans. An alleged white supremacist rammed his car into a crowd of counterprotesters, killing a 32-year-old woman, Heather Heyer, and injuring at least 20 people.

Trump at the time blamed “many sides” for the violence and said there were “very fine people” on both sides. That caused consternation among his Jewish advisers, including reportedly his daughter Ivanka Trump, his top economic adviser Gary Cohn, Treasury Secretary Steven Mnuchin and David Shulkin, the secretary of veteran affairs. It also earned widespread condemnation from Republicans and Democrats in Congress, and from Jewish groups.

Trump later seemed to withdraw from that posture and his spokeswoman said this week he looked forward to signing a congressional resolution squarely blaming the white supremacists for the Charlottesville violence.