In Dnipro, Orthodox father and son soldiers are ‘ready to kill Russian soldiers’ 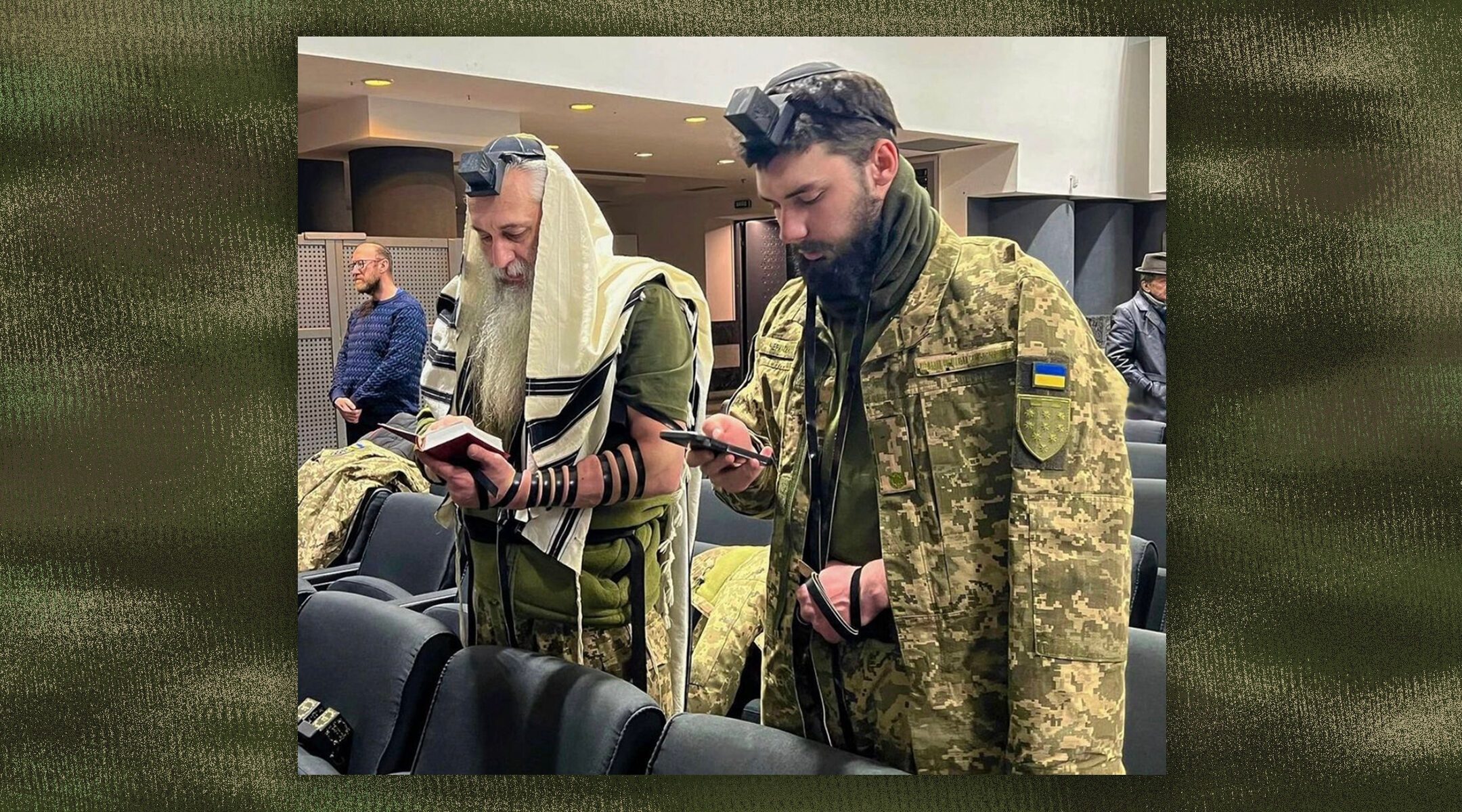 Asher, left, and David Cherkaskyi pray in their Dnipro, Ukraine, synagogue this week. The father and son have enlisted to fight for Ukraine in its war against Russia. (Courtesy David Cherkaskyi)
Advertisement

(JTA) — Until just a few months ago, David Cherkaskyi was finishing a degree in cybersecurity, praying at his Chabad synagogue and posting selfies from his travels across the Jewish world.

Now, he’s standing by in his hometown of Dnipro, Ukraine, “ready to kill Russian soldiers.”

The 20-year-old Hasidic Jew and his father Asher are among a force of 400 Ukrainian troops poised to try to repel an attack on their eastern Ukraine city, one of several where Russian troops are expected to stage combat in the coming days.

The father and son are part of the Territorial Defense Force, the civilian army that Ukrainian leaders hope will help the military push back against what is proving to be a full-scale air and land Russian attack — including, increasingly, on civilian targets.

The centrally located city of Dnipro is of key strategic importance in the conflict because of its airport and its high level of metals production.

It’s also significant to the Chabad Orthodox Jewish movement, whose last leader, Rabbi Menachem Mendel Schneerson, was the son of the city’s chief rabbi from 1903 to 1939 and spent much of his adolescence in the city. A 22-story Jewish community center, built to resemble a Hanukkah menorah, is a testament to that history.

The Cherkaskyis are members of the Jewish Community of Dnipro group, run by Chabad. But David said he could imagine one satisfying detour from his hometown right now.

“I would go all the way to Moscow and beyond and shoot f—ing Putin myself if I could,” Cherkaskyi told the Jewish Telegraphic Agency, referring to the Russian president who declared war on his country six days ago.

Pictures of the duo praying in military fatigues have gone viral in recent days. “Pray for these brave humans,” the prominent account Jews of NY posted in one widely viewed share of David Cherkaskyi’s Instagram post.

Exactly how many Jews are in Ukraine’s army and in the newly formed volunteer units is unclear. Some Ukrainian Israeli Jews have returned to join the fight, and the commander in chief’s boss, Ukrainian President Volodymyr Zelensky, is Jewish.

Cherkaskyi says there are at least two other Jews in his battalion — and his Jewish identity, he said, is a non-issue for his fellow fighters.

“Everyone is ready to fight. It doesn’t make a difference if you are Jewish or not — no one is thinking about that,” Cherkaskyi said, adding that his Jewish identity didn’t cause him problems before the war either.

“Everyone can see me and my dad are Jewish and we all want to defend our country. This idea that Ukrainians are neo-Nazis is made up by Putin,” he added, referring to one justification that the Russian president has offered for the unprovoked war.

The 20-year-old says he does everything one can imagine as a volunteer, while his father is a “real” soldier with combat experience against the Russian army in Donetsk in 2014 and 2015. It was then that the Russian military joined separatist forces in two breakaway Ukrainian enclaves that Putin is now demanding come under full Russian control.

Facing a potential long-term need for fighters, Ukraine is currently prohibiting men between 18 and 60 from leaving the country. But it has not conscripted anyone: Both Cherkaskyis have volunteered, with Asher announcing on Facebook in late January that he had reenlisted in the Ukrainian army because of the Russian troops amassing at the border.

Asked if he was afraid, Cherkaskyi said that a person who doesn’t show fear on the outside is more afraid on the inside.

“But fear is not my biggest problem right now,” Cheraskyi said. “I need 400 pieces of body armor and helmets. Now we have guns but we don’t have protection.”

He is trying to raise funds for vital supplies and medicine. Cherkaskyi is working closely with the From the Depths Foundation, a group that typically works with Holocaust survivors in Eastern Europe but now is supporting Jewish refugees affected by the war.

The first-time soldier is sleeping only two hours a night because there is so much preparation needed for a possible invasion. “I can’t tell you exactly what I have been doing these six days because that’s classified,” said Cherkaskyi.

He said he has no time to eat and just has some sips of an energy drink when he is famished. Cherkaskyi tries to adhere to Jewish law but admits that keeping Shabbat might be difficult in wartime circumstances. (Jewish law permits violations of Shabbat and other rules to save lives, and across Ukraine, Orthodox Jews traveled during Shabbat last week as they sought to evacuate increasingly unsafe cities.)

Despite any obstacles, morale is very high among the volunteers, Cherkaskyi said.

The Ukrainians are buoyed by their unexpected strength against the Russian army. “Unofficially we are hearing that the Russians have already lost 10,000 soldiers,” he said. “That’s more than died in the Chechen War.” (Russia’s official news sources have announced 500 deaths, leading those with expertise on Russian propaganda to surmise that the true toll must be much higher.) 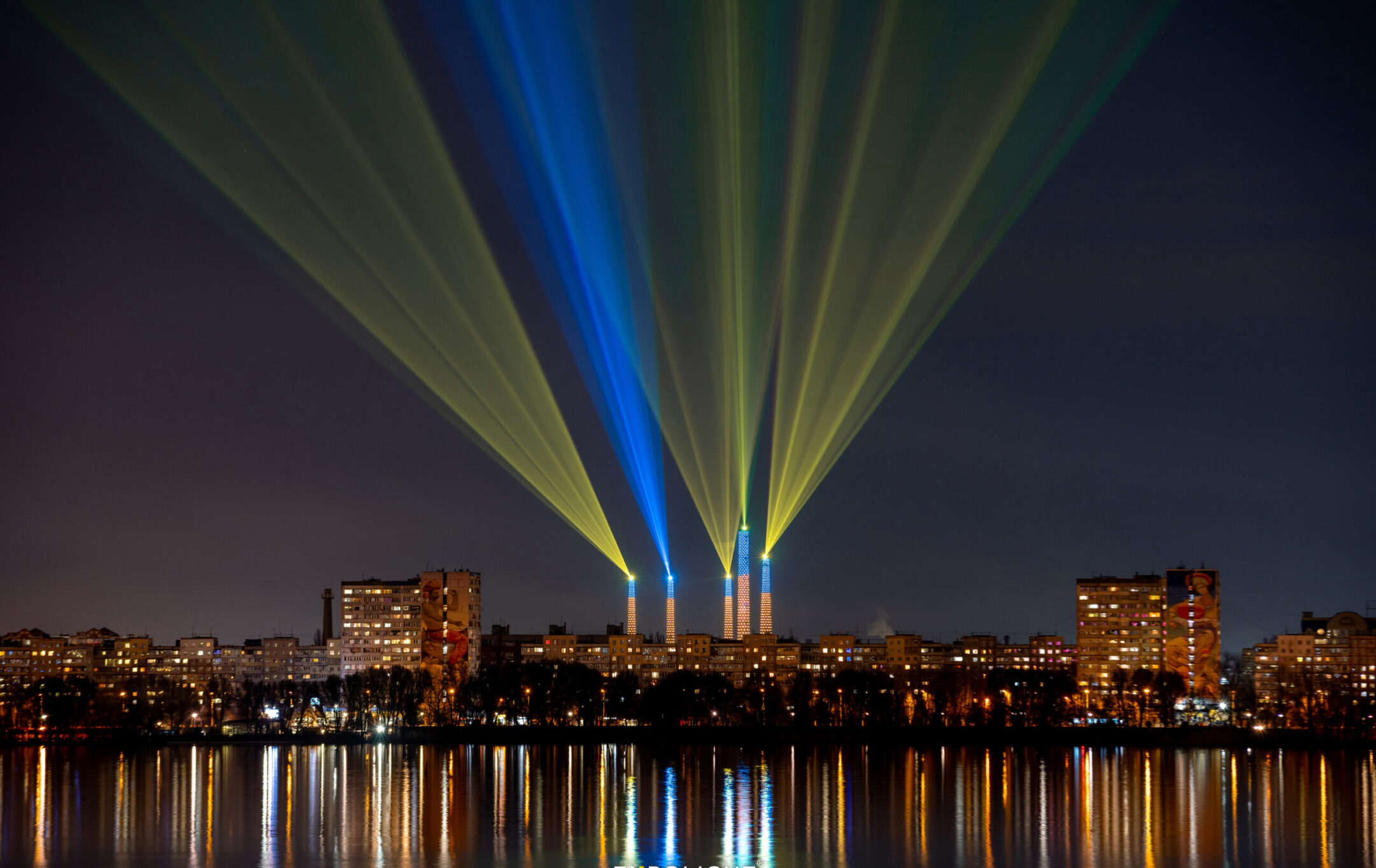 The skyline of Dnipro was lit up with lasers for Ukraine’s Day of Unity, Feb. 16, 2022. Russian forces invaded the country just over a week later. (Mykola Miakshykov/ Ukrinform/Future Publishing via Getty Images)

Shooting Russian invaders was not how Cherkaskyi and his dad thought they would be spending the early days of March.

His father is a businessman and city council member in Dnipro. Cherkaskiy was finishing his studies at one of the country’s prestigious technical universities when the war became imminent.

“I am not a hero, I never wanted to be a soldier. I had friends whose dream was to join the army. That was not my case.”

Cherkaskyi has visited Israel multiple times, but he has not sought to move there as tens of thousands of Ukrainian Jews have in recent decades. For now at least, he said, emigration feels like a distant idea.

“That’s not a bad idea for the future,” Cherkaskyi said. “But now my country is being invaded so we stay and fight.”