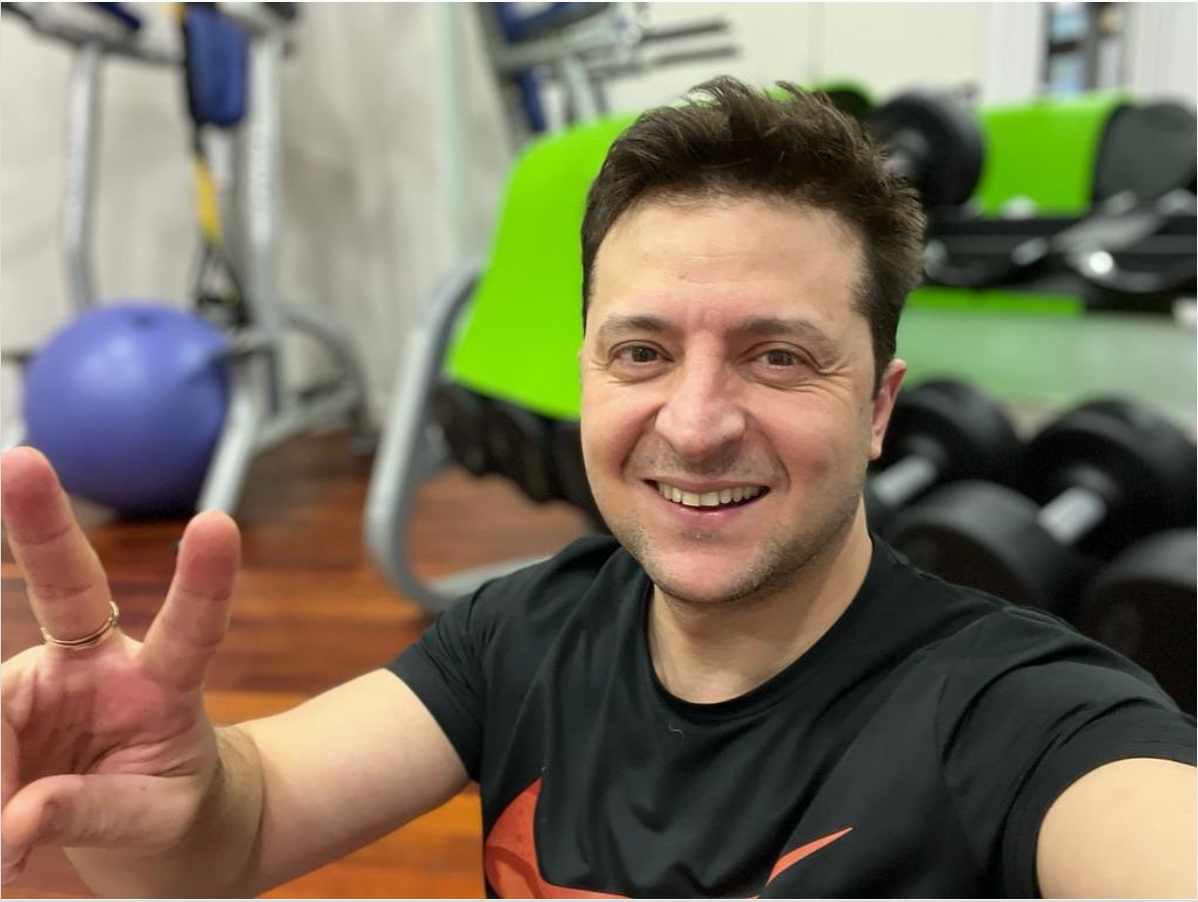 (JTA) — The world has had a crash course on Volodymyr Zelensky in recent days, as the Ukrainian president has galvanized his country against an unprovoked attack by neighboring Russia.

The broad strokes of Zelensky’s career have long been known to those who pay attention to Ukrainian politics — or to their spillover effects in American government. He’s young, funny, Jewish and committed to a strong democratic Ukraine, even at the risk of death. “I need ammunition, not a ride,” he reportedly told American authorities this week after they offered to evacuate him from Ukraine.

But as someone who has long been in the public eye, and not always in politics, Zelensky has left more to know than that. We scoured interviews in multiple languages, scrolled back through his social media posts and compiled some amazing YouTube clips to offer a more nuanced portrait.

Here are 18 things you should know about the man who has captured the world’s attention.

1. He had an “ordinary Soviet Jewish upbringing.” Zelensky told the Times of Israel in early 2020, on the eve of visiting Israel to commemorate the 75th anniversary of the liberation of Auschwitz, that his family was typical of Soviet Jews in the 1980s when he was growing up. That meant, he said, that they were not religious, because “religion didn’t exist in the Soviet state as such.” Indeed, Jewish observance was illegal and Jews were routinely surveilled, although many Jews did preserve some elements of their Jewish identity as acts of resistance. If that was the case in Zelensky’s family, he hasn’t said so. “I never speak about religion and I never speak about God because I have my own personal opinion about it,” he said in the interview. “Of course, I believe in God. But I speak with him only in those moments which are personal for me.”

3. As with most Ukrainian Jews, the Holocaust is part of his story. Zelensky has said that his great-grandfather and three of his grandfather’s brothers died as a result of the Nazi invasion of Ukrainian territory. His grandfather and his grandfather’s brothers took up arms against the Nazis in the Red Army; his grandfather was the only one to survive. He did not specify whether they died in combat or in the extended massacre of more than 1 million Ukrainian Jews that the Nazis carried out, often with local collaboration. His grandmother, he has said, survived because she left Kryvyi Rih for Kazakhstan; almost all of the Jews who remained were murdered. A Holocaust memorial not far from his parents’ home in Kryvyi Rih was defaced in January 2020.

4. He says being Jewish is a small part of his identity. Zelensky rarely discusses his Jewish identity publicly, and by all accounts it was not a prominent part of his campaign, even by his detractors. Asked about his Jewishness by the French Jewish philosopher Bernard-Henry Levi in early 2019, Zelensky declined to explore it at length, Levy wrote when the interview appeared in the French newspaper Le Point. “The fact that I am Jewish barely makes 20 in my long list of faults,” he told Levi.

Want to see Zelensky and his comedy partners say “L’chaim”? Head to 3:00 in this video, a skit from before Ukraine’s 2010 elections.

5. He has credited his Jewish parents with giving him his moral compass. Zelensky’s father, Oleksander, is a mathematician who heads a university computer science department; his mother Rimma was an engineer for many years. He said in a 2018 interview, shortly before officially running for president, that because of them, he is unable to accept lies. “I always react painfully to lies,” he said. “This is the main feature that my parents gave me.”

6. He has many personal ties to Israel. Zelensky has said he has relatives who moved to Israel in the 1990s, during the wave of Jewish emigration from the newly dissolved Soviet Union. He has also conducted business there as an actor and comedian, and performed in venues throughout the country. As Ukrainian president, he has visited just once, for the Holocaust commemoration shortly before the COVID-19 pandemic began. “I know Israel,” he said in the Times of Israel interview. “I know people there.”

7. Married for nearly two decades, he’s the father of two children. Zelensky dated his wife Olena, a school acquaintance 11 days his junior, for eight years before they married in September 2003. Their daughter Oleksandra was born the following year, and they had a son, Kyrylo, in 2013. Olena has been an advocate for women and children since Zelensky took office, and on Tuesday she posted on Instagram about the bravery of Ukrainian women who are defending their country against the Russians. Zelensky has said that his family remains in Ukraine but that he will not disclose their location; he told CNN on Tuesday that he had not seen them in three days.

8. He got a scholarship to study in Israel but didn’t go. In a 2018 interview with a friend from the entertainment industry, he described scoring so high on an international English exam that he had an opportunity after high school to study in Israel. Most of his classmates took advantage of the option — he named one woman specifically who moved to Israel — but he did not, saying that his father prohibited him from moving. He studied law in Ukraine instead.

9. He won the Ukrainian equivalent of “Dancing with the Stars” in 2006. A highlights reel of a 28-year-old Zelensky twisting and dipping in a series of outlandish outfits, including a pink leisure suit, went viral over the weekend.

so apparently Zelenskyy won the Ukrainian version of Dancing with the Stars in 2006 and the tape is even better than whatever you're imagining pic.twitter.com/L1gnKD2ISr

10. His most prominent acting role foreshadowed his presidency. On the political satire TV show “Servant of the People,” Zelensky played a history teacher so outraged by government corruption that he runs for president — and stuns the country and himself by winning. Produced by Zelensky’s company, the show aired on Ukrainian television from 2015 to 2019, its final episode launching just weeks before Zelensky was himself elected president.

11. He voiced Paddington in the Ukrainian-dubbed versions of the “Paddington” movies. A clip about the movies’ dubbing shows the soon-to-be president giving his voice to a delightful cuddly CGI bear. At one point, Zelensky makes the sounds generated when Paddington sticks electric toothbrushes up his nose. The Paddington books were inspired by Jewish children who took refuge in England during World War II.

12. He has … unconventional piano skills. One piece of his comedy team’s shtick was to pound the keys with their pants at their ankles and their hands in the air — leaving little room for guessing how the music was getting made. One of their standbys: the Jewish classic “Hava Nagila.”

Who among us has not played "Hava Nagila" on a piano with their genitals on stage and then gone on to lead their country against a foreign invasion? pic.twitter.com/6IlRgF83he

13. He likes dogs, working out and shawarma. Zelensky’s pre-presidency Instagram account reflects his passions from before he was responsible for representing Ukraine on the world stage. He frequently posted workout selfies, which continued at a less frequent pace after he became president. He also posted pictures of his dogs Peter and Nora. And shortly after taking office, he posted a picture of himself eating a shawarma sandwich, writing, “When you have a busy schedule, shawarma can be the solution. … For those in power, I recommend it!”

14. He went shirtless for his COVID vaccination. Most world leaders posted pictures of themselves with rolled-up sleeves getting their inoculations against COVID-19 in 2021. Zelensky went the distance, removing his shirt entirely, in a move that drew international side-eye. For another shirtless view, check out this 2014 video of his comedy troupe performing a parody of a popular Ukrainian band.

15. The conversation about casting his inevitable biopic has already started. It’s unclear how the Volodymyr Zelensky movie will end, but his admirers have already started suggesting stars to play him. One suggestion that appears to have gained steam is Jeremy Renner, who has acted in war films and bears a resemblance to Zelensky. But Renner is not Jewish, leading some to suggest that he would not be an appropriate choice. For his part, Zelensky was dismissive of the adulation in a CNN interview from his bunker on Tuesday, saying, “It’s very serious, it’s not a movie … I’m not iconic, I think Ukraine is iconic.”

16. He reportedly changed the global response to Russia’s aggression this week in five minutes. Some world leaders were reportedly hesitant to impose steep sanctions on Russia on Thursday night, after the first day of the country’s war on Ukraine. But after meeting with Zelensky by videoconference and hearing him deliver a five-minute, emotional appeal for aid, they changed course. “It was extremely, extremely emotional,” a European official briefed on the call told The Washington Post. “He was essentially saying, ‘Look, we are here dying for European ideals.’”

17. He doesn’t like to lose. In the 2018 interview with his entertainment industry friend, Zelensky characterized himself as someone who commits to a fight for the long haul — a resonant idea as his country nears the end of its first week at war with Russia. “I’m such a guy that if I get involved in a battle, I usually don’t get out of it. I can lose, but go out in the middle of it … no,” he said. “The white flag is not our flag!”

18. People who know him say he is who he seems right now. “I’ve always thought he is a person who has a profound sense of right and wrong,” a senior adviser to Zelensky told the Washington Post on the condition of anonymity in recent days. “He will never acquiesce when he thinks something is wrong.” The newspaper asked the adviser whether he believed Zelensky was prepared to die. “The adviser answered without hesitation: ‘Yes.’”