As many flee Ukraine, some rabbis have headed there — to celebrate Purim 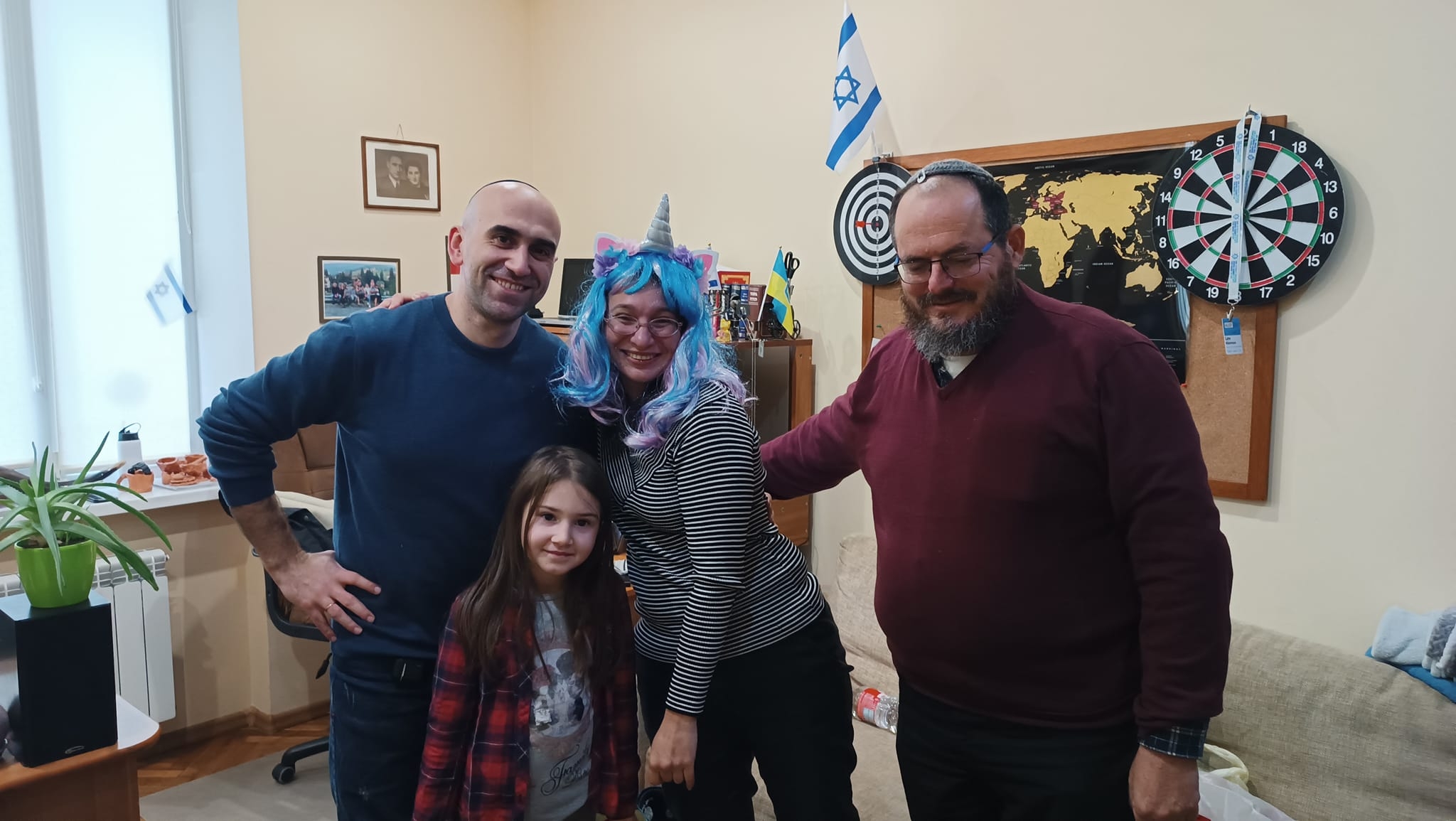 Rabbi Irina Gritsevskaya, in the unicorn wig, traveled to Chernivtski, Ukraine, for Purim despite the war there, March 16, 2022. (Facebook)
Advertisement

(JTA) — Before this week, Rabbi Irina Gritsevskaya’s last trip to Ukraine from her home in Israel was in January, when the city of Chernivtsi sparkled with Christmas lights and brimmed with cheer.

Now, the city located just an hour’s drive from the Romanian and Moldovan borders is packed with refugees from across Ukraine who have fled from cities facing weeks of Russian attacks to the relative calm of the country’s southwest.

Over the past three weeks, since Russia invaded Ukraine and started a brutal war, Gritsevskaya has urged the Jews from Kyiv, Kharkiv and Odessa that she works with through Midreshet Schechter Ukraine, a Jewish education organization, to make their way to Chernivtsi.

And on Monday, she made her way there herself, reversing a course that countless Ukrainian Jews have taken in recent weeks. After flying from Israel to Europe, Greitsevskaya passed through the Siret border crossing in Romania into Ukraine.

“I can’t say I am not scared,” she posted to Facebook from the airport in Iasi, Romania, after landing on Monday night. But, she added, “When I think about many, many people whom I know and I talked to in the last two weeks who are real heroes, my own fears seem so insignificant.”

Gritsevskaya made the trip for Purim, the holiday celebrating the survival of the Jews over the efforts of a murderous villain to massacre them. Along with a colleague, she brought into the country a megillah, the scroll containing the Purim story, and on Wednesday, she posted videos of festivities in Chernivtsi — including a young girl whose costume included eyeshadow in the blue and gold of the Ukrainian flag.

“We’re trying to have some kind of real Jewish life in the city that can be bombed tomorrow even though it’s not bombed today,” Gritsevskaya said during a virtual program Sunday hosted by the Schechter Institutes, the Israel-based Conservative movement-affiliated seminary that has operated Midreshet Schechter Ukraine for the last 30 years.

Born and raised in Russia and living in Israel for decades, Gritsevskaya was perhaps the least likely rabbinic presence in Ukraine for Purim this year. But she was far from the only one on the ground facilitating a war-torn celebration.

Chabad estimates that two dozen of its rabbis led festivities in communities across the country, some of whom were also returning to the country from abroad after initially evacuating with their families and, in many cases, community members.

The Orthodox movement has had the largest Jewish presence in Ukraine, where the movement’s last and most prominent rabbi, Menachem Mendel Schneerson, lived as a child and young adult. Before Russia invaded, there were 192 Chabad couples working in 32 cities, serving what the movement estimates is 250,000 Jews in the country. (Estimates of Ukraine’s Jewish population range widely; the lowest comes from a recent survey that found 43,000 people who self-identified as Jewish.)

And on Wednesday, they made sure that Jews on the ground in many cities were able to fulfill the obligation to hear the Purim story recited — and to revel in the survival of the Jewish people.

In Dnipro, home to a 22-story Jewish community center shaped like a menorah that was a Chabad project, a megillah reading drew hundreds of people.

“We should celebrate this Purim with unbelievable victory: no more war, no more suffering!” Rabbi Shmuel Kaminetsky, who has been Dnipro’s chief Chabad rabbi since 1990, said during the livestreamed event.

Similar but smaller-scale Chabad celebrations took place in Odessa; Kryvyi Rih, the hometown of Volodymyr Zelensky, Ukraine’s Jewish president; and Kherson, which is under Russian control.

Two young rabbis are even running Purim activities in Zaporizhia, the site of a fierce battle over a major nuclear facility, according to Motti Seligson, the director of media relations at Chabad Lubavitch.

“The vast majority of Jews are still there and they probably are not going to leave,” Seligson told the Jewish Telegraphic Agency last week about Ukraine. “We don’t define where people decide to live, we just serve them where they’re at.”

For an increasing number of Ukrainian Jews, that is Chernivtsi, where relative calm has caused 40,000 refugees to move and where Turkey has relocated its Ukrainian embassy, from Kyiv. The Chabad rabbi who has lived there for the last 20 years returned from Israel, where he took his wife and children after the war began, to lead a local celebration.

There, Gritsevskaya posted a video of her community’s members preparing for the holiday by putting up decorations, painting a mural and baking hamantaschen. The festivities also included a cocktail contest and the unpacking of essential supplies, including medicines and dried kosher meat, that Gritsevskaya and her colleague, Rabbi Avi Novis-Deutsch, brought from Israel.

And, of course, they heard the Purim story, read from the megillah that Novis-Deutsch, head of the Schechter Rabbinical Seminary, bought for the Jews of Chernivtski this year.

Novis-Deutsch — who carried the scroll as carefully as he would a baby, Gritsevskaya joked on Facebook — wrote that he had made the purchase as a show of confidence in the community’s future. It was, he wrote, “a kind of expression of trust in the community in Chernivtski, of hope, hope for better days.”