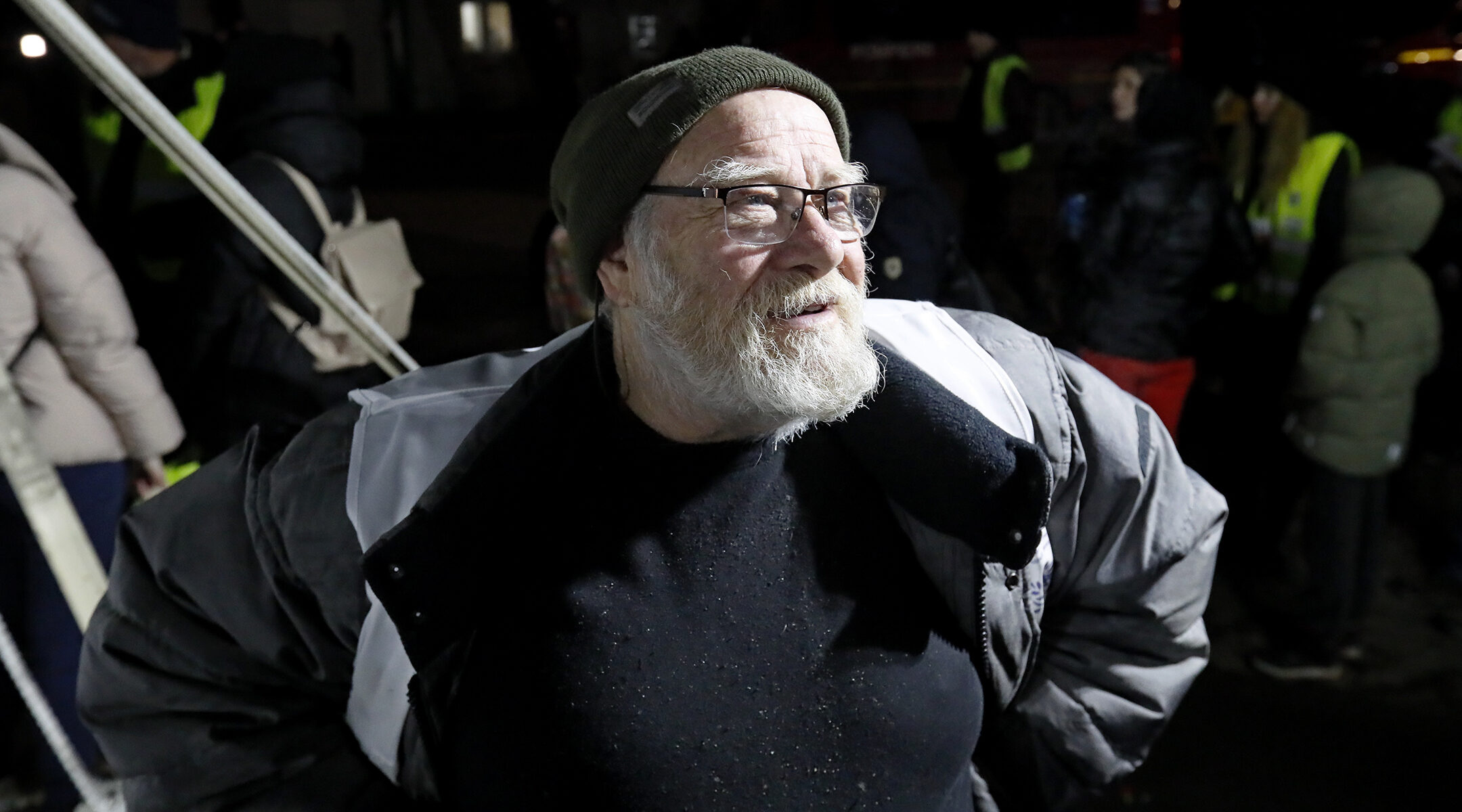 Tuvia Zechter at the JDC tent near the border crossing in Siret, Romania. (JTA)
Advertisement

SIRET, Romania (JTA) — The first thing Ukrainian refugees see when they enter Romania through the border crossing of Siret is a tent serving up what has come to be known locally as “Jewish soup.”

The tent is operated by the American Jewish Joint Distribution Committee, or the JDC, and the soup is a local version of a bean-and-vegetable borscht that is being portioned out day and night to the haggard Ukrainians flowing out of their war-torn country.

“I’ve already made 31 big pots like these,” Tuvia Zechter, the retired cook who runs the improvised kitchen near the border, told the Jewish Telegraphic Agency. The JDC is one of many charity groups that have set up shop on a half-kilometer stretch of road to serve what has become an incessant flow of displaced women and children.

“Everyone likes our food and they come to eat here from all over the place,” Zechter added, referring to the Romanian volunteers, soldiers, firefighters and policemen working to receive the refugees.

A Romanian-born Israeli, Zechter spent 15 years of his life cooking for the Israeli police in Netanya and also worked in restaurants and hotels abroad. He returned to Romania to retire and now lives “away from the big city” in the historically Jewish town of Radauti, some 20 kilometers south of the Ukrainian border. 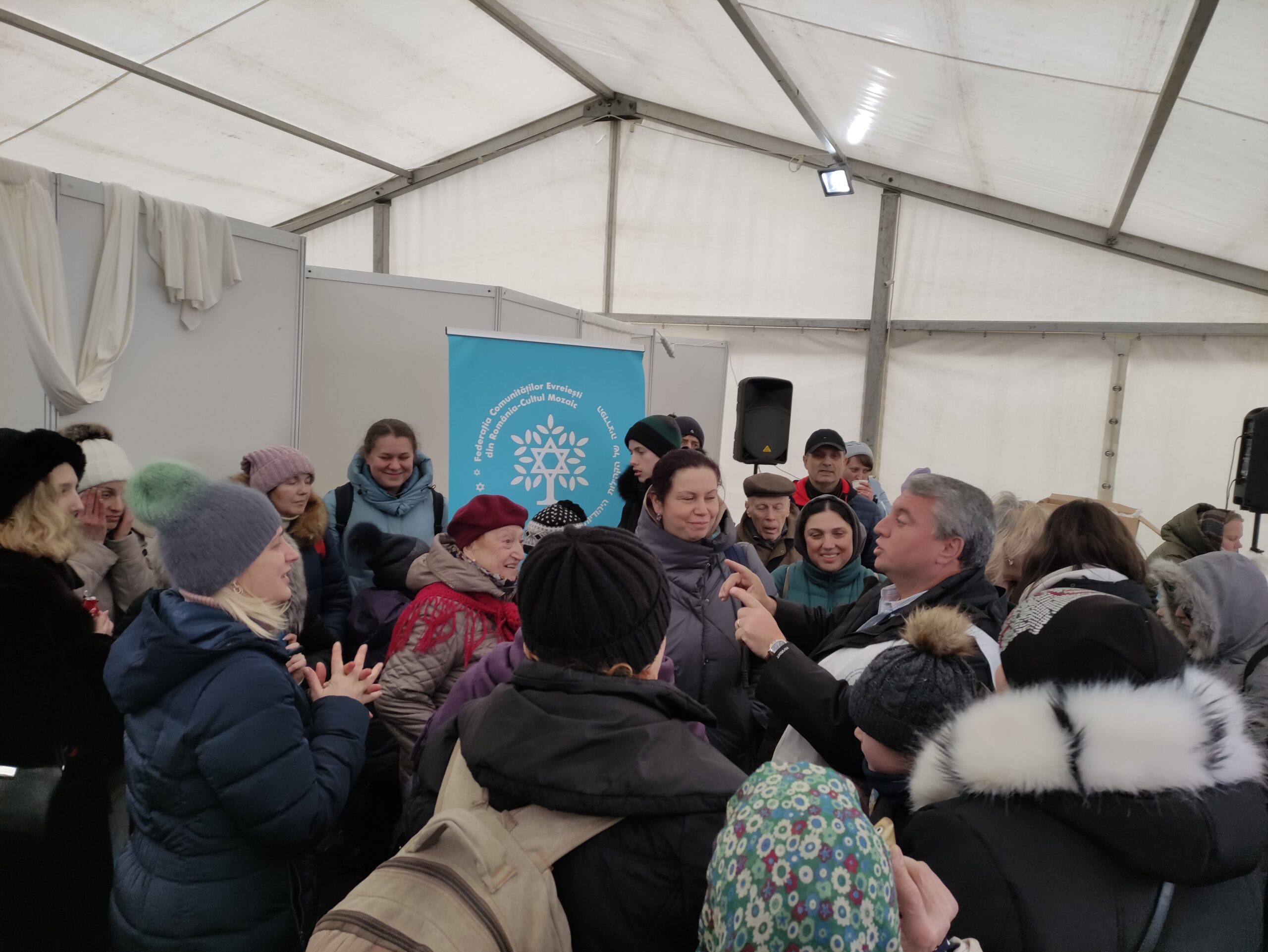 JDC Romania Director Israel Sabag welcomes a group of Jews from Ukraine at the Romanian side of the border. (Marcel Gascón Barberá)

Zechter joined Jewish efforts to help Ukrainians fleeing the Russian army when a nephew from the United States asked him to take responsibility in running a soup kitchen for the refugees at the border.

This nephew is no other than Israeli-American businessman Moti Kahana, who has drawn attention for leading audacious missions to extract thousands of Jews and other people in need from Syria, Iraq and Afghanistan. He is now working at the Romanian-Ukrainian border, a place that has a personal connection for him.

“My family is originally from Romania, and when the American Jewish Joint Distribution Committee called me and they said we need a cook I said, this is wonderful, my uncle lives down the street,” Kahana told JTA before crossing the border to assist an Israeli businessman waiting to cross from Ukraine.

A serial entrepreneur who made what he said were “millions of dollars” when he sold his most successful company to car rental giant Hertz, Kahana has since specialized in rescuing people in danger through his company, GDC, which offers logistic and humanitarian diplomacy services to nonprofit organizations.

Kahana decided to create his own company after being deeply disappointed by how some non-governmental organizations spent his donations.

“When I saw some NGOs spending my money in flying first class I decided to offer my help directly to the people, so I go to the border myself and see what I can do for them,” said Kahana, who often does work pro bono besides the paid assignments he takes through his company. In his view, NGOs are more productive and cost-effective when they outsource their logistic work to professionals.

“Otherwise you risk spending most of the money you raise in salaries,” he argued. 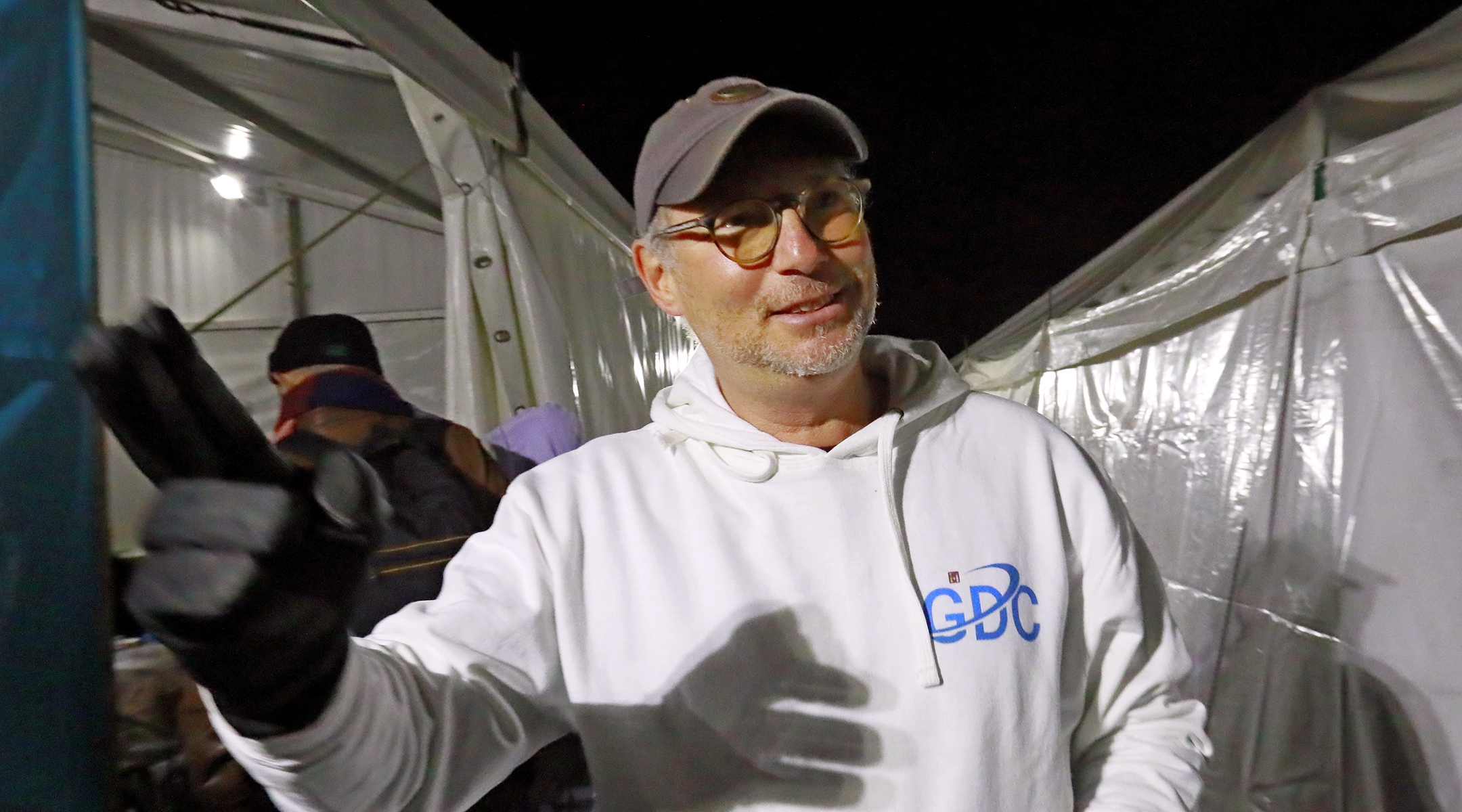 Kahana said he is impressed with the response of the Romanian people and government.

“There’s more people coming to help than actual refugees,” he said. “Politicians, including small-town mayors, come to ask how they can help and offer themselves to take refugees; unlike in countries like Turkey and Jordan, where I also worked, I’ve not seen anyone in Romania making money out of the refugees.”

He presented an invoice of his latest purchase, consisting of sugar, pasta, grains and cooking oil, as evidence that Romanians are not trying to profit illicitly during the crisis.

“Usually people would charge me more because I am an American company,” he said. “But here it is different. Suppliers insist on offering discounts and some people refuse to be paid for their work.”

In recent days, Kahana’s GDC began partnering with the Israeli embassy in Romania.

“Since Moti can cross to the other side, and we can be only on the Romanian side, he is helping us to distribute aid to people who are waiting on the line,” Israel’s ambassador to Romania, David Saranga, told JTA.

Besides offering help to get home to the more than 4,000 Israelis who have fled Ukraine through Romania since the start of the war, as well as immigration support for other Jews who have come through the border crossing, the Israeli embassy has distributed clothes, shoes, games and other items to refugees arriving in Siret.

Israel also took part in the rescue of 10 children suffering from cancer and other serious illnesses who had escaped Kyiv with their parents and were flown on Tuesday to Tel Aviv. They will receive treatment for free at the Schneider Children Medical Center in Petach Tikvah.

Women, children and elderly people from towns and cities across Ukraine are arriving constantly in Siret. Rina Dukno is a student of Informatics Engineering and comes with her mom, her sister, her nephews and two cats from the Dnipro River port city of Kamianske, known in the Soviet era as Dniprodzerzhynsk, in honor of the secret police chief Feliks Dzerhinsky.

“I’m not yet 100% sure, but I think I will do aliyah,” Dukno told JTA, referring to immigration to Israel. She was planning to start the process next year through Masa Israel Journey, which organizes Israel experiences for young adults. But the Russian invasion of her country has changed everything. 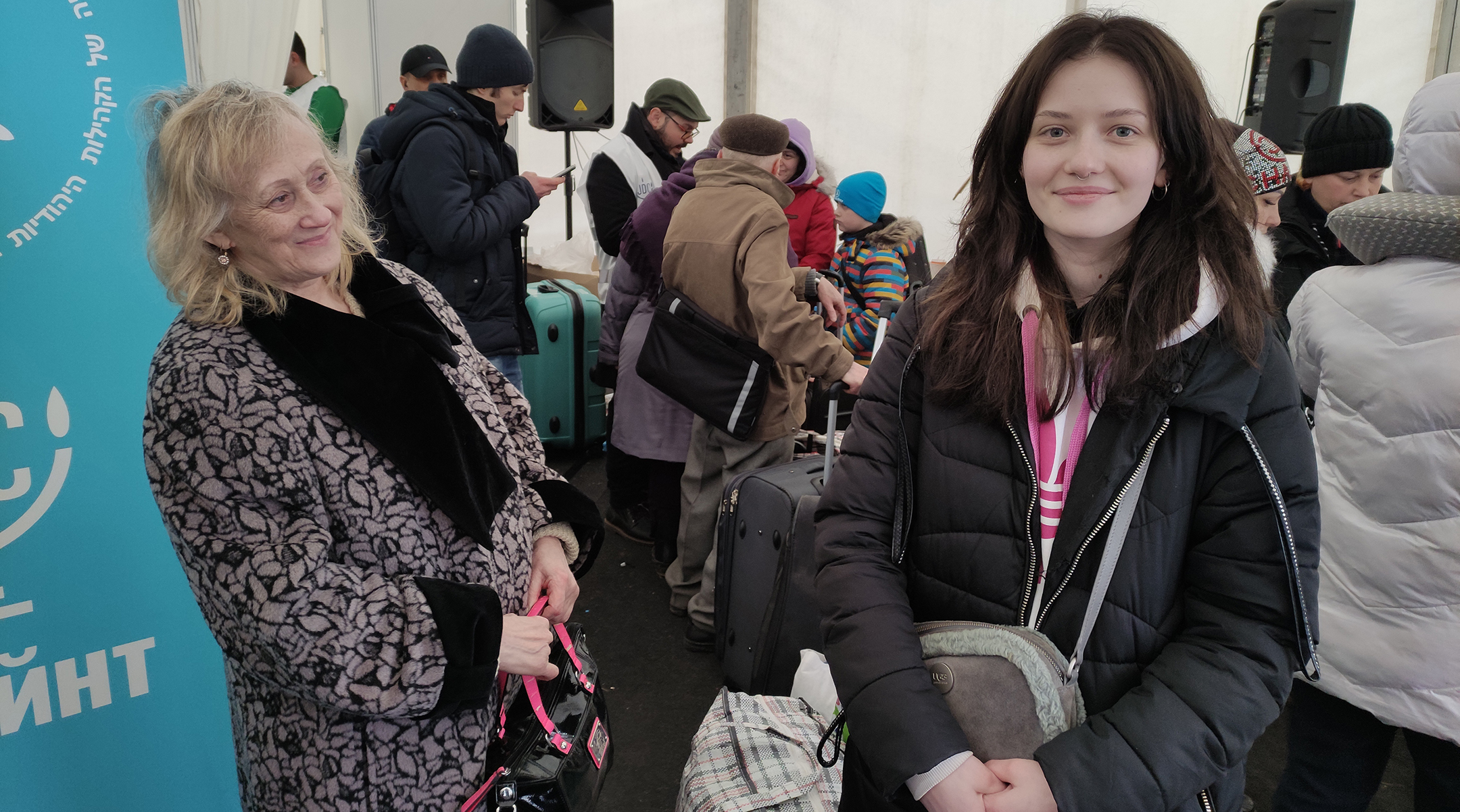 Laiza Vedeneva at the JDC court with her grandmother. (Marcel Gascón Barberá)

“I always wanted to move to Israel with my family, but not under these conditions,” said Dukno, who speaks only a little Hebrew and expressed sadness at having to leave “so quickly and with just some bags.” She hopes that peace is soon restored in her native country.

Laiza Vedeneva arrived on the same bus from Kamianske. She finished her high school education and plans to study languages in Israel, where her mother already lives. Vedeneva is fleeing Ukraine with her grandmother. Together with the rest of the group, they planned to travel to Bucharest, where they will spend a few nights in a hotel before flying to their new life in Israel. Among the prospective immigrants are also Svetlana and her sister Irina, two pensioners from the town of Kryvyi Rih in central Ukraine — the hometown of Ukraine’s Jewish president, Volodymyr Zelensky.

When the newly arrived finish their portion of Zechter’s popular “Jewish soup,” JDC Romania’s director Israel Sabag welcomes them in Hebrew, Ukrainian and Russian. The crowd cheers, eyes light up and smiles appear on the tired faces.

Daniel Adrian Dogaru, 48, is a stonemason by profession and lives in Slanic Moldova, a small Romanian town 250 kilometers south of Siret. Apart from Romanian, he speaks Hungarian, Bulgarian, Greek and English. He came to the border by himself to do volunteer work and use his linguistic skills to help other people communicate with the refugees.

After identifying JDC’s operations as the most efficient in Siret, he joined them as a volunteer, saying that he was impressed by the “seriousness and promptness of the Jews” in responding to the refugee crisis in his country.