Refugees with Jacuzzis: The surreal life of 200 Jews at a 4-star resort in wartime Ukraine 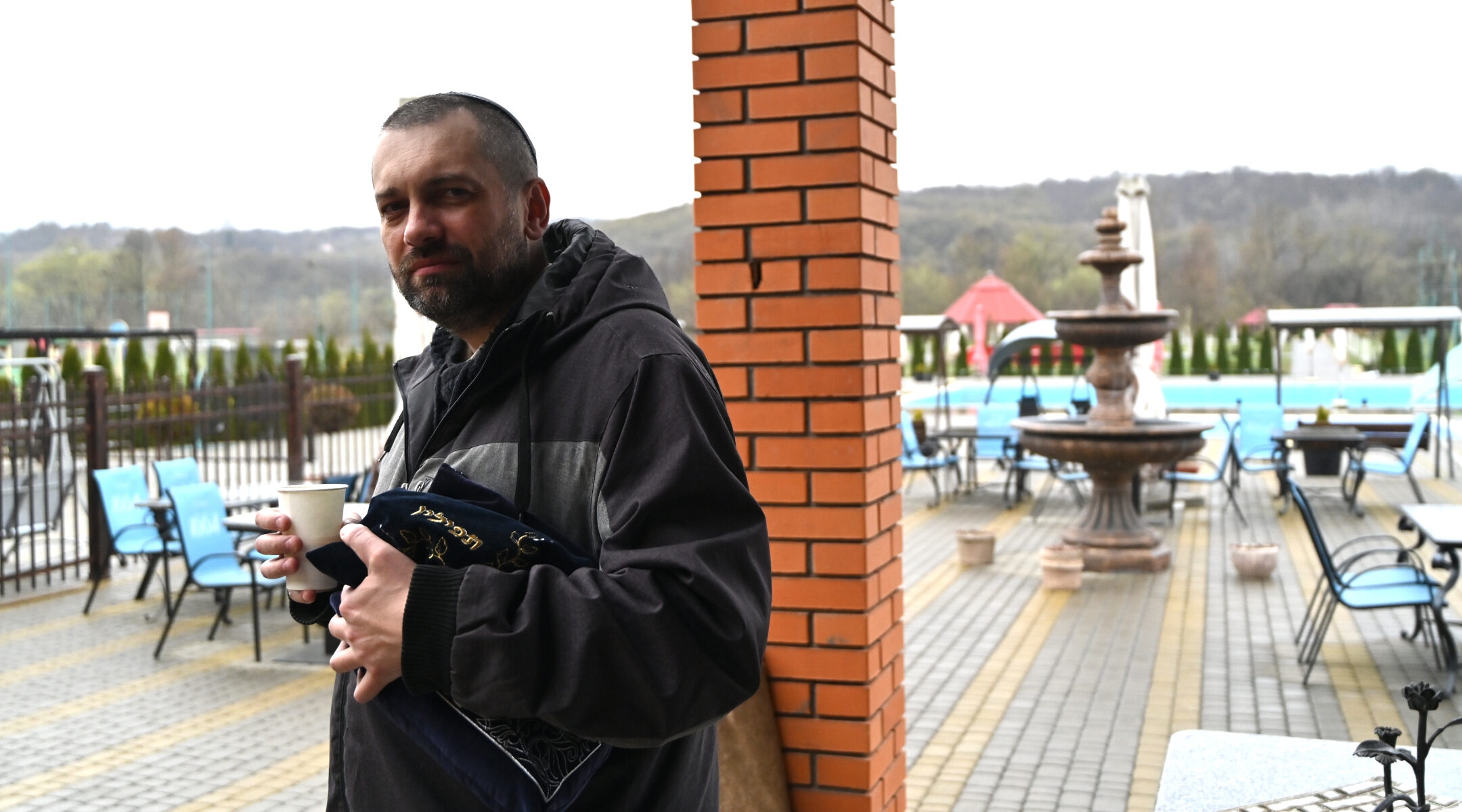 IRSHAVA, Ukraine (JTA) — Like dozens of displaced persons camps that now dot Eastern Europe, the one in this Ukrainian town near the Hungarian border has inhabitants whose lives were turned upside down by Russia’s war.

But the refugee camp at Irshava is different.

For one thing, it’s equipped with a kosher kitchen and accommodates about 200 Jews from across Ukraine.

For another, it’s a four-star riverside resort featuring tennis courts, three swimming pools with saunas, a fishing park, rooms with individual Jacuzzis, a fitness center and an indoor jungle gym complete with a ball pit for children to play in.

“We’re refugees, yeah, but over here being refugees has its perks,” said one of the inhabitants, Stanislav Gluzman, a 39-year-old Jewish father and finance professional from Kharkiv who’s been living in one room with his wife and son for the past month amid uncertainty — and relative luxury.

The surreal situations on display in Irshava encapsulate how many of Ukraine’s Jews were caught by surprise by a war that for months had been brewing in their backyards, never believing it would actually happen. And the longer they stay at the resort, the less hope they harbor for a return to normal.

The camp, which costs tens of thousands of dollars to run each week, was set up early last month by Ukrainian Chief Rabbi Ya’akov Dov Bleich, who heads the Great Choral Synagogue of Kyiv and its Orach Chaim congregation.

Bleich, who is one of two men claiming to be Ukraine’s chief rabbi, divides his time between Ukraine and his native New York, where he was when Russia invaded on Feb. 24. He returned to Ukraine in March and says he has since raised more than $2.5 million for emergency efforts at Irshava and beyond.

Thousands of people have died in the ensuing fighting and millions of Ukrainians have fled their homes. Most are living in conditions far worse that the ones enjoyed by the 200 inhabitants of the Illara resort, where Bleich’s community booked all the rooms and turned it into the only refugee camp in Irshava.

Yevgeni and Anya Rozvadoskyy, a couple from Berdichev who take care of one of that city’s Jewish cemeteries, are spending more time than usual with their children, 16-year-old Dasha and her 7-year-old brother Vadim. Yevgeni has taught Vadim how to fish at the resort, and the boy is happy to explain his technique with pride.

But life is no holiday for the inhabitants of the Illara resort, its amenities notwithstanding.

“Life here isn’t bad but it’s like you’re dangling on a string. The uncertainty gets to me sometimes,” said Gluzman, who goes by Stan. 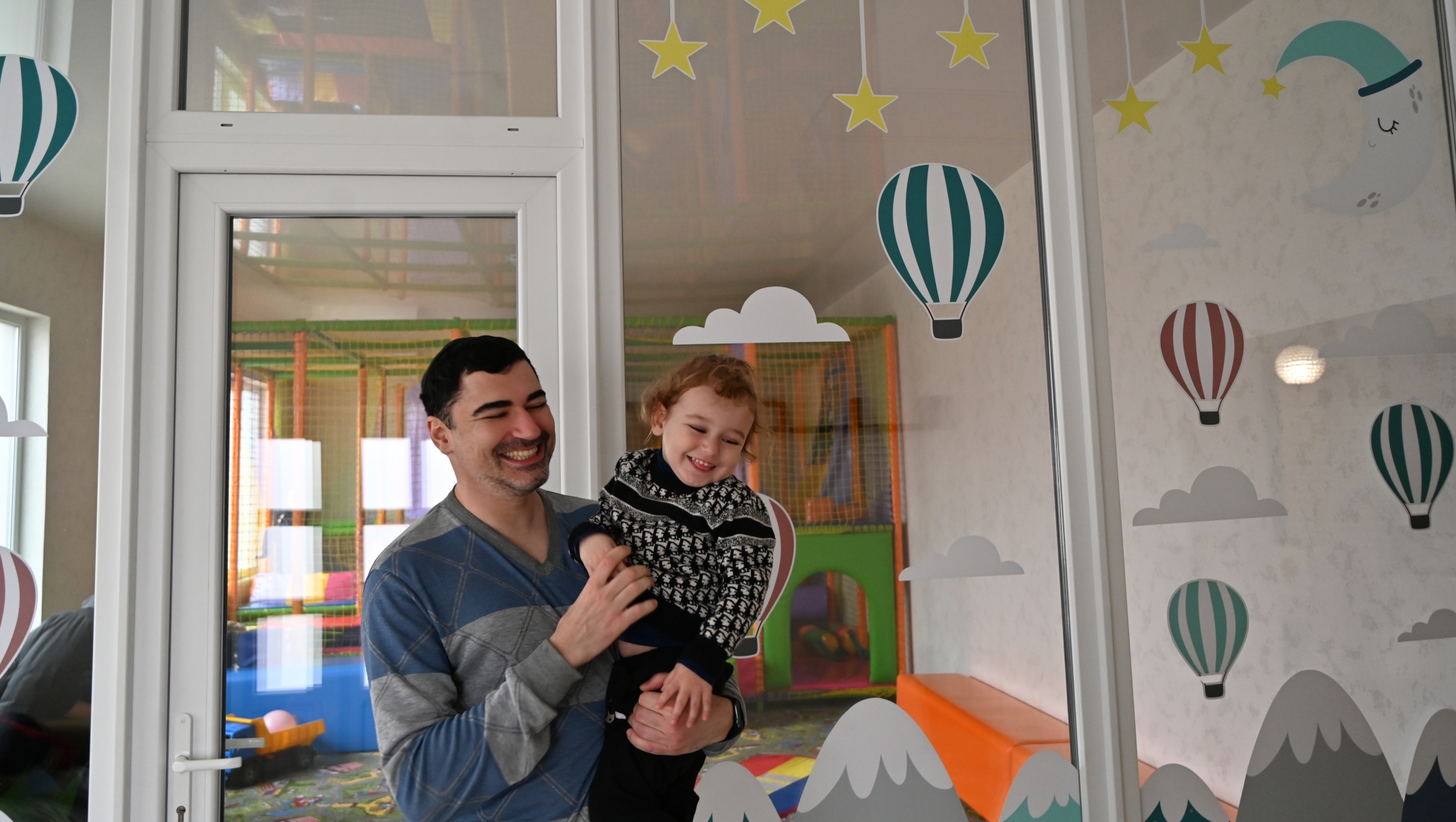 A main topic of debate in his family is where they will go next, and when. One option is Israel, where most of Gluzman’s family moved many years ago. They are also considering joining the family of his wife Naomi, a 29-year-old therapist who is also Jewish, in a safer region of Ukraine.

The couple is up for adventure: They met on a Jewish dating site three years ago and, after speaking twice by phone, spontaneously decided to travel together to the Maldives for their first meeting. And as polyglots with mobile jobs — Stan works from his laptop as does Naomi, who counsels patients online — there is no shortage of places where the couple could reasonably work.

For now, the family is staying inside Ukraine because the country is not allowing men younger than 60 to leave the country, unless they have three or more children. The emergency measure is meant to allow for conscription into the army.

“At a certain point I wanted Naomi to take our son Mikhail and leave without me, but, understandably, she doesn’t want to do that,” Stanislav said.

The couple owns a home that was built in the 1930s under Josef Stalin to house high-ranking army officers in Kharkiv, then a major Soviet city. With their private bomb shelter, the family thought they could remain there safely even if war broke out — which, like many Ukrainians, they doubted would happen.

The night before Russian troops invaded, Stanislav had the foresight to pack essentials — including, crucially, 18 gallons of gasoline — into their SUV while Naomi and Mikhail slept. They drove west for 20 hours, avoiding days-long traffic jams by riding on potholed road shoulders that are traversable only with a hardy four-wheel-drive car.

Naomi, who was born in Odessa, wants them to stay in Ukraine — though not in Kharkiv.

“It’s too close to the Russian border. Russia will keep coming at us, every few years. It’s how it’s going to be from now on, after 2014,” she said, referencing Russia’s annexation of Crimea that year.

About where to move, her husband said, “We disagree on this point but it’s pointless to discuss it. Who knows what will happen? Everything is so uncertain.”

Karina and Ruslan Baikov, also from Kharkiv, know exactly where they want to ultimately end up. A physician and a building contractor, respectively, the latter specializing in the restoration of Kharkiv’s protected buildings — many of which are now destroyed — they share a room in Irshava with their 12-year-old daughter Sonia and her 6-year-old brother Artium. 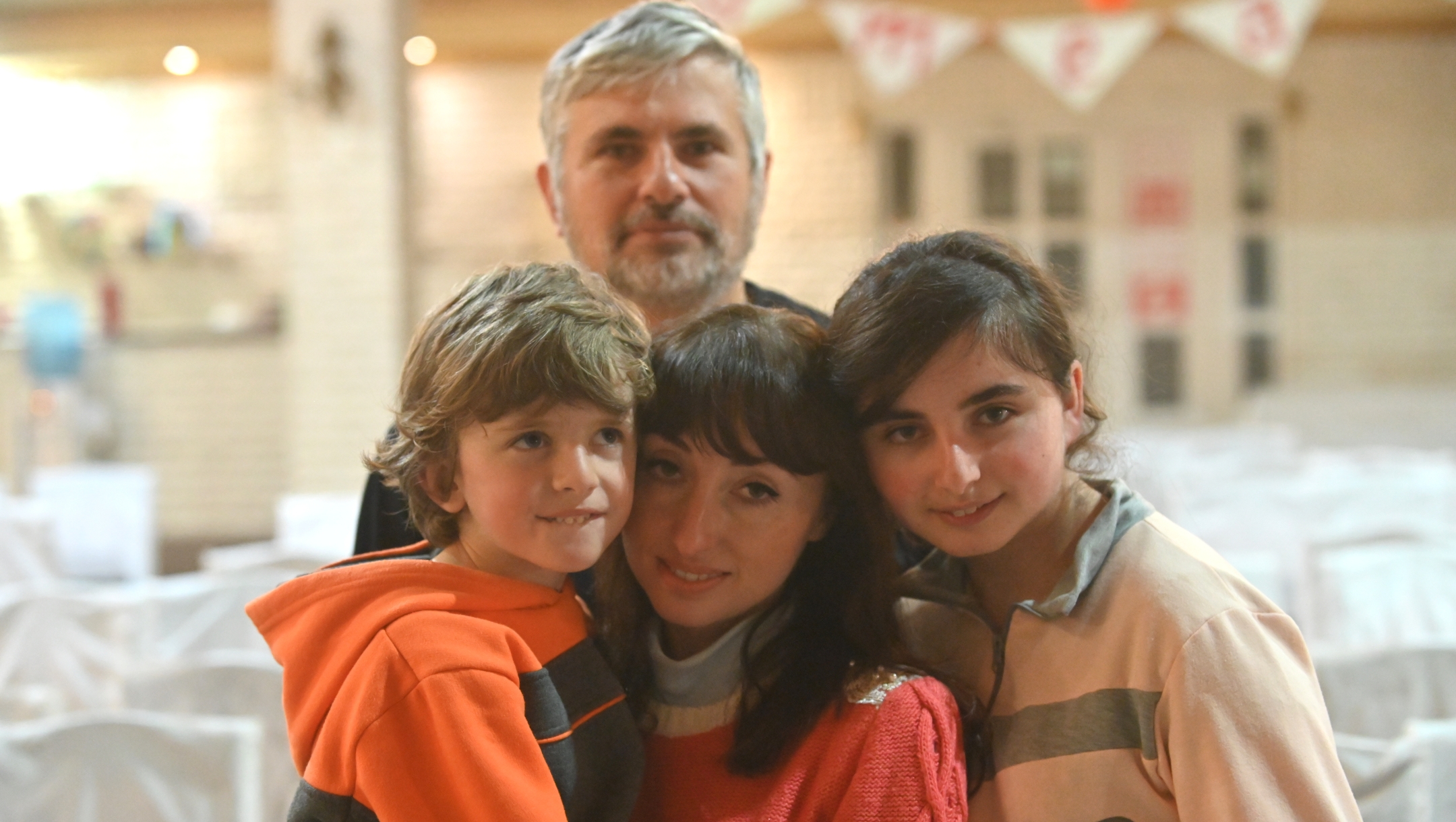 Ruslan and Karina Baikov pose with their children, Artium and Sonia, for a family portrait at the refugee camp in Irshava, Ukraine, April 5, 2022. (Cnaan Liphshiz)

Ruslan, a broad-shouldered and square-jawed man with pale blue eyes and a laid-back disposition, said he wouldn’t leave Ukraine even if he could. He’s eager to “rebuild Kharkiv, literally. I know each broken window there, each collapsed balcony and each new one damaged give me pain,” he said.

Before the war, the couple was living in affluence, traveling frequently to faraway destinations, including Egypt. Karina, who does microbiological research, likes to bring several of her fanciest dresses — which she left back in Kharkiv — to vacation photoshoots with professional photographers she finds online.

“I don’t know why she does it,” Ruslan said, shrugging.

Rolling her eyes, Karina counters. She has a large following on Instagram and the designers of the dresses pay her for the photoshoots. “It’s called modeling. Your wife is a model,” she tells Ruslan over a dinner of meat dumplings, rice and vegetables.

The Baikovs and Gluzmans, neither of whom are very religiously observant, know each other from Kharkiv and spend a lot of time together at Irshava.

Stan Gluzman, a Jewish history buff who occasionally organizes guided trips abroad centered on Jewish themes, finds it ironic that so many Jews now live in Irshava, which currently has no native Jewish community but once was a large shtetl, or Jewish town.

“During the Holocaust, Irshava’s Jews were murdered except for the ones who fled east, into Russia, to escape the Nazis,” he said. “Now Jews are coming here as refugees to escape Russia. Crazy, isn’t it?” 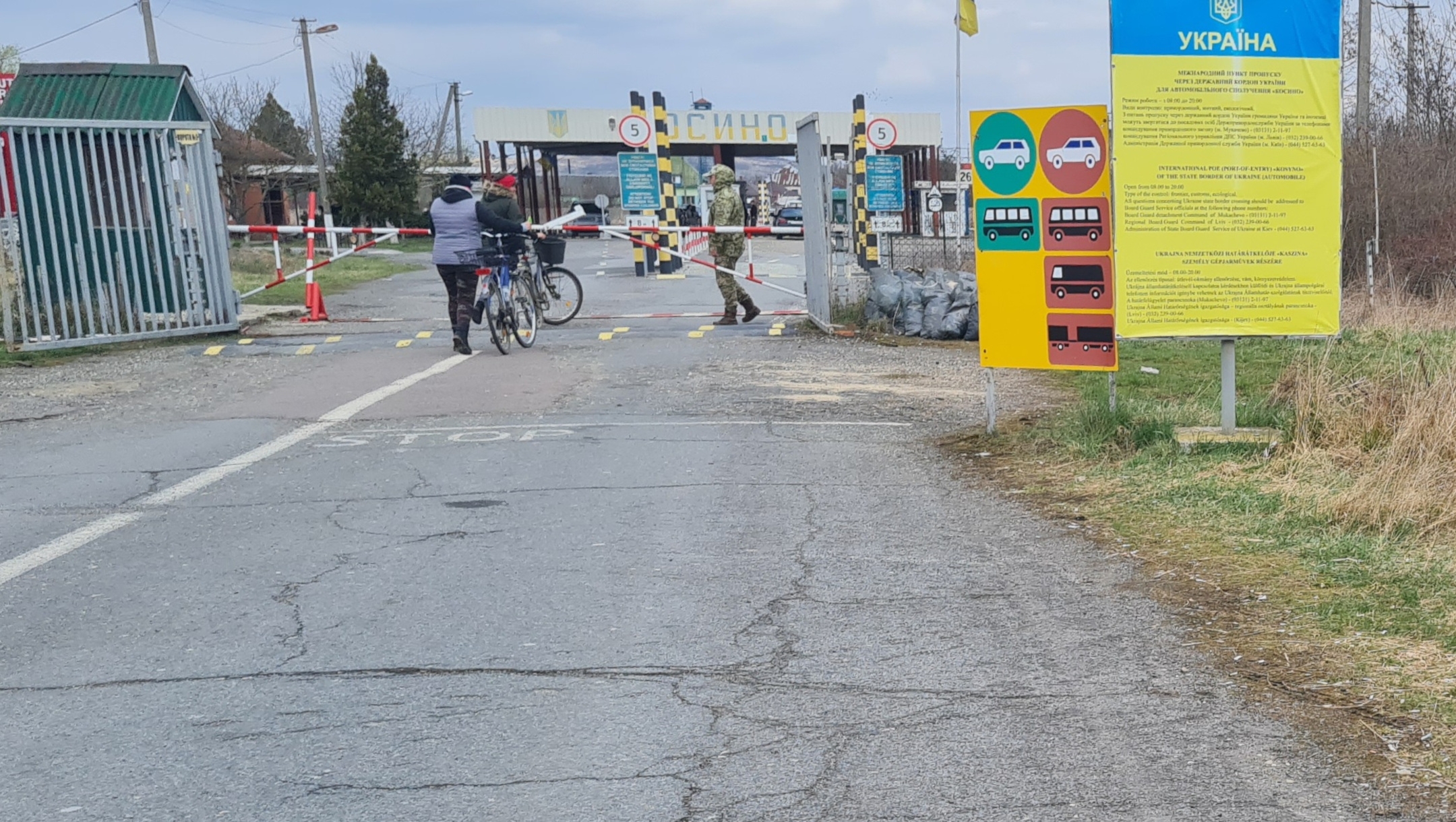 Gluzman learned about the Irshava camp through friends from the Jewish community after he fled with his family independently. Other camp inhabitants came on a bus organized for them by Bleich and his community from Kyiv.

Some of the Irshava camp’s inhabitants are separated from their families. Hugging his tefillin after morning prayer, Akivah Artamonov, a graphic designer from Zhytomyr near Berdichev, looked pensively at the ribbons of rain falling on the foothills of the Carpathian mountains, just beyond the manicured acreage of the Illara resort.

His wife, a pediatrician, and their two children, aged 13 and 8, left three weeks ago for Israel, but Akivah, 43, had to stay behind because of the emergency draft rules.

In Zhytomyr he has an Apple desktop computer that he couldn’t take with him, so he’s now unable to work. Akivah, who is devoutly observant, says he is going to leave Ukraine and Europe for good as soon as he can.

“This part of the world will never be all right. We need to go to Israel, where we’re at least masters of our own lives and it’s easier to live as Jews,” said Akivah, drinking black coffee and drawing nervously on a cigarette. “But that’s easy to say. First I need to leave already.”

His next computer, he added, “will be portable.” 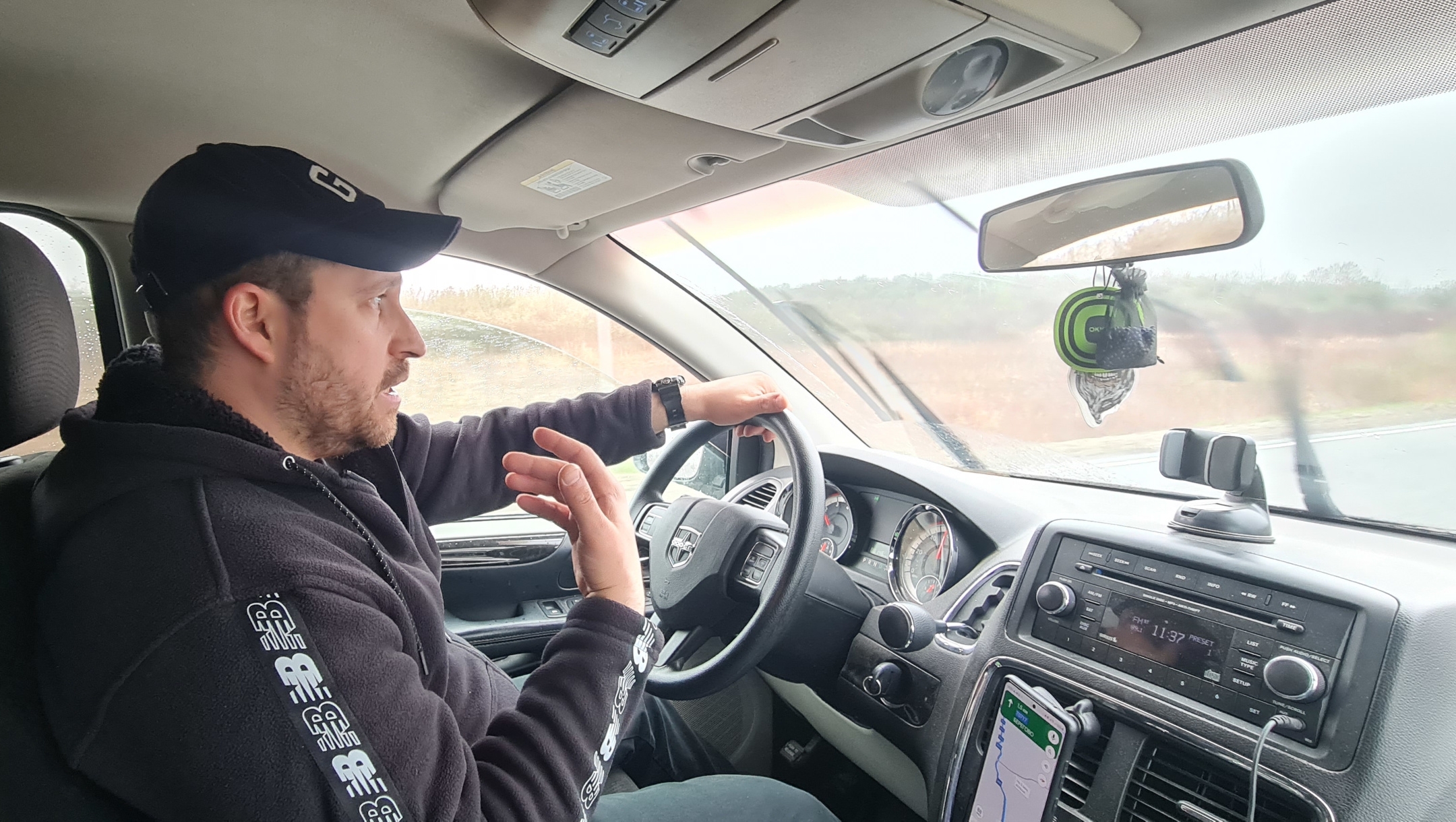 Others still could leave Irshava but stay out of a sense of duty, like Gershon Birenboim, a teacher at the Jewish primary school of Kyiv’s Orach Chaim congregation and a father of three.

His is considered a large family, so Birenboim, 35, is permitted to leave Ukraine with his wife and children. “But I’m needed here now,” said Birenboim, a chatty chain-smoker who learned to speak English “from hanging around Rabbi Bleich and his family all the time.” His accent was clearly influenced by that of the rabbi from Monsey, New York, the Orthodox enclave north of New York City.

“Living here, away from Kyiv, without kosher food would have been much more difficult for an observant family,” he said.

Some of the inhabitants at Irshava keep to themselves. Others help here and there. Others still work around the clock to run the camp.

Among the latter, Birenboim probably has the most contact with the outside world. He is in charge of busing in new refugees and sending off others — including families whom Bleich is helping to cross the border into Hungary. Birenboim also buys food and supplies and handles other logistical issues.

A Kyiv Jew who describes himself as having “an unmistakable Jewish punim,” Yiddish for face, Birenboim isn’t at ease in this rural part of Ukraine, home to many ethnic Hungarians and nationalistic Ukrainians.

“The people here are colder generally and many, something in them tenses up when they see me,” he said. “Even if I wear my kippah under a hat, my Kyiv accent and face advertise that I’m Jewish right away and I’m not sure that’s appreciated here. Whatever, it’s not illegal.”

As fighting recedes around Kyiv, many who fled the city in the war’s early days are tentatively returning. Birenboim, whose wife helps run the Irshava refugee camp’s kitchen, is “counting the days” until they can return to the city, too, he said. He has no intention of moving to another country.

“I’ve never had so much appreciation for routine in my life,” he said. 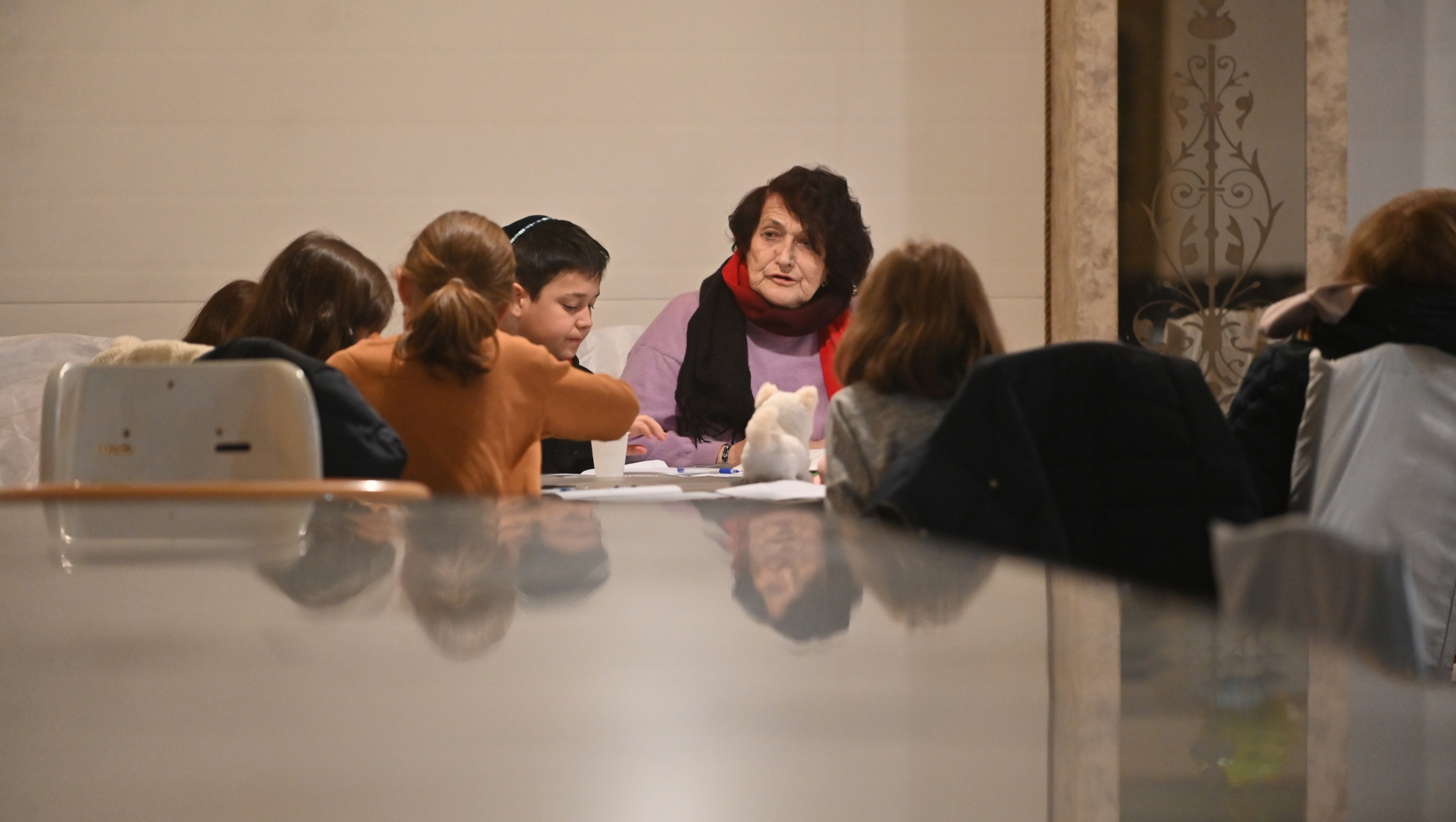 A woman, known to her students as Mrs. Rozaliya, teaches them at the refugee camp in Irshava, Ukraine, April 5, 2022. (Cnaan Liphshiz)

Yet at camp, he ceded the position of teacher, with its predictable schedule, to a retired woman named Mrs. Rozaliya who teaches English, Russian and Ukrainian to small groups of children for two-hour stretches in the camp’s dining hall.

Birenboim said he prefers running errands in the camp’s black Dodge station wagon, even if it means he can’t predict what he’ll be doing at any given time.

“When you teach you need to do it structurally. No point any other way,” he said. “But right now I don’t have the head for it. This is a chaotic place at a chaotic time. It’s easier to have a chaotic job.”