This year, I am a refugee spending a joyful Passover in Berlin. Next year in Kharkiv. 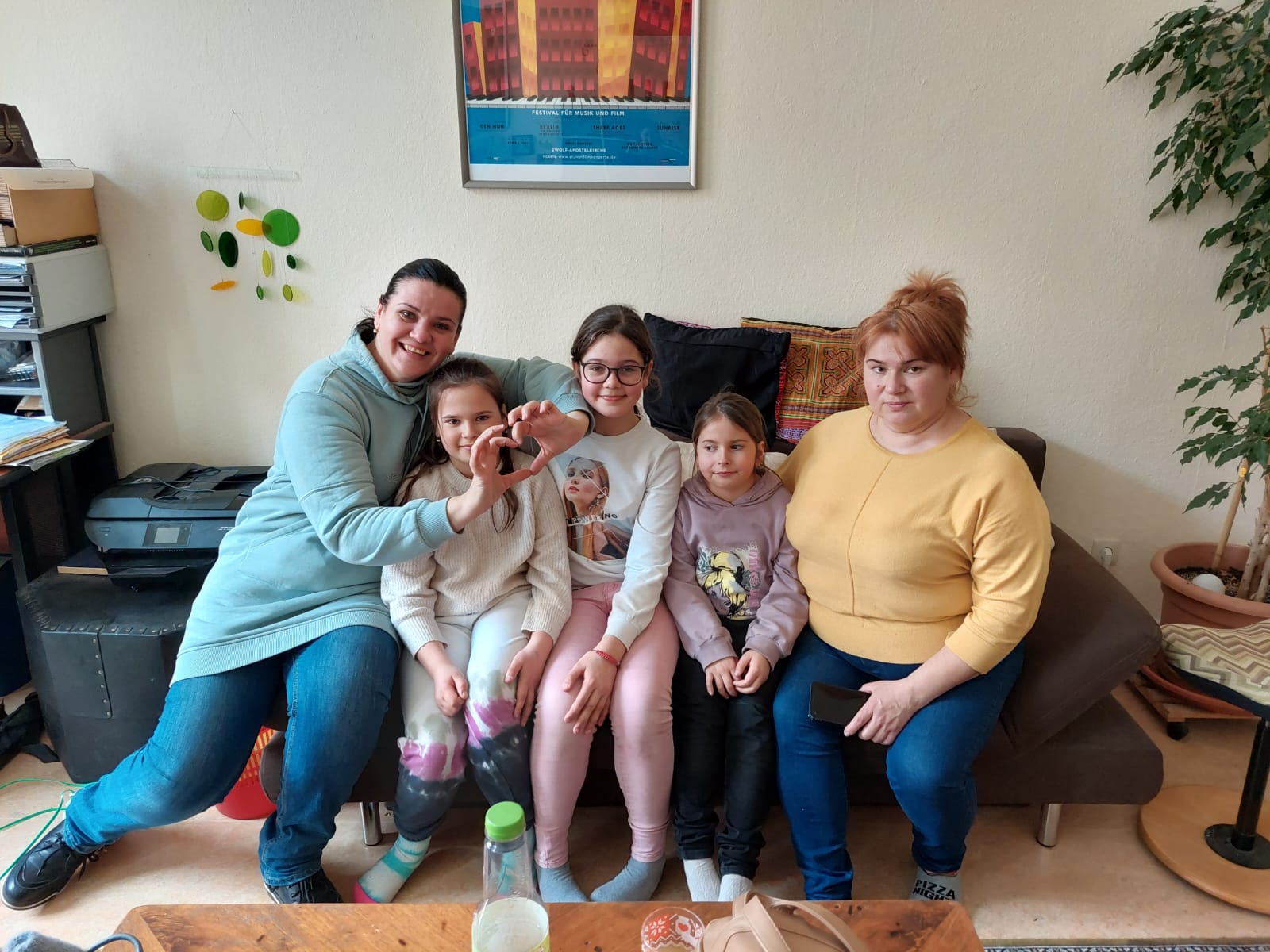 Until last month, Tanya Borodina, 44, headed every day to the Shaalavim Jewish Lyceum, a school affiliated with the Conservative, or Masorti, movement in Kharkiv, Ukraine. When the city came under Russian shelling, Borodina and her young daughter fled, ending up in Berlin, where the sister Masorti community swung into full gear. This weekend, mother and daughter will be among 40 people attending a Passover seder at Berlin’s Fraenkelufer Synagogue, run by volunteers from Germany’s Limmud.de Jewish learning program. For Borodina, who has been teaching via Zoom, the closing prayer will be: Next year in Kharkiv.

BERLIN (JTA) – I want to share my story: Maybe it will inspire someone, maybe it will upset someone. I have an ordinary family: me, my husband, Andrei Barkovsky and our child, Allochka, now 10 years old.

I was born in Ukraine, in the city of Donetsk, but in 2014 the war in the Donbas began. On July 23 we grabbed a package with documents and our little Alla (then 2 years old) and we fled from the war. We arrived in Kharkiv — a large, beautiful, peaceful city, the original capital of Soviet Ukraine.

We left everything in Donetsk — an apartment, our belongings, toys, photographs — and started our lives from scratch. It was not easy: to find an apartment, to issue documents for immigrants, to find a job, a kindergarten, a school. But we coped, slowly adjusted our lives: My husband immediately found a job in auto repair and I was invited to teach Hebrew and Jewish tradition at the Shaalavim Jewish Lyceum.

As it turns out later, these were the brightest eight years of our life in Kharkiv. On Feb. 24, our peaceful life there ended, as if an hourglass had been turned over.

I still remember how a peaceful city woke up at 4:30 in the morning from explosions and the roar of shells, tanks passing through the streets. I had deja vu. My family and I had run away from the war in 2014, but it turned out that the war was chasing us and overtook us in Kharkiv.

Now we were learning to live in wartime conditions: There were no calendar dates or times. Just “day one of the war,” “day two,” “day 15.” Everyone hoped that this was not true, that everything would end soon, that Kharkiv would not be bombed.

This is a terrible word: war. It does not even fit in my head that this is possible in the 21st century. We tried to survive inhuman conditions: without water and heating, without vegetables and fruit. Stores closed, public transport stopped running in the city, and in a panic people bought all the food and medicines in pharmacies.

We decided that the safest place in our house is the hallway, so our whole life was spent there. We slept there, ate there, Alla played there. In order not to completely disrupt our child’s psyche, we put headphones over her ears, so she could not hear the explosions outside. 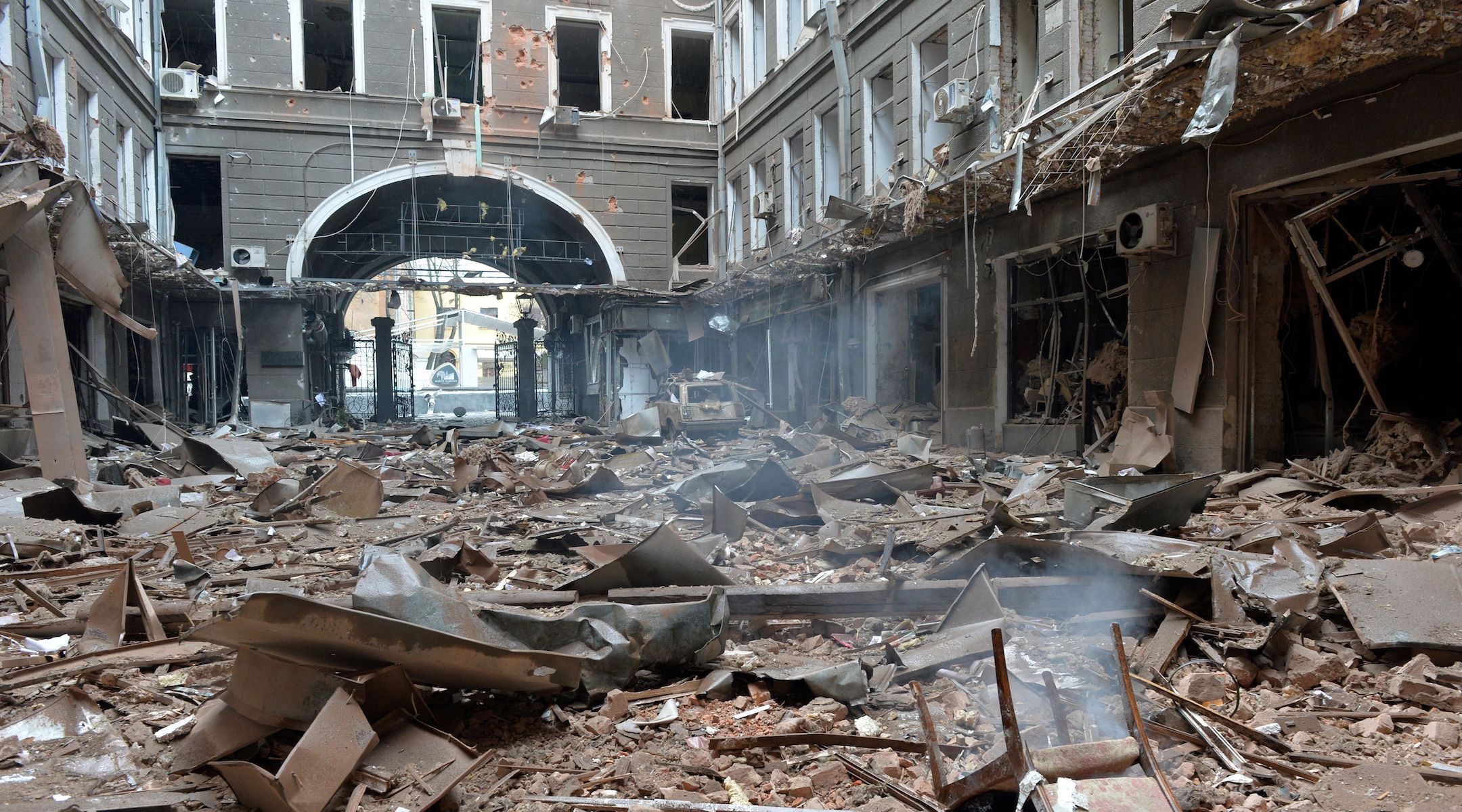 A photo shows damage to a building in Kharkiv’s Constitution Square after shelling by Russian forces, March 2, 2022. (Sergey Bobok/AFP via Getty Images)

Everyone texted each other: How are you? And we looked forward to an answer, any answer, because this was a guarantee that the recipient was alive.

Many people simply lived in the subway. Many were in cellars. We didn’t go outside for a month. You didn’t know when the shelling will start. All you could hear from friends is that their house was blown up, or the school was hit, and most importantly, that people were dying, ordinary peaceful people who were going to get food or standing in line for humanitarian aid.

It’s scary, very scary: trembling in the knees, pain in the stomach and heart. Many people began to leave. Many others stayed, especially old people, sick people, those who could not walk. The other teachers and I organized our own volunteer headquarters, to help our families who remained in Kharkiv. We prepared and brought food, groceries, medicines, stationery and other products and delivered them to addresses across our devastated city.

That is how we lived until March 26, when my husband said: You must leave the war zone, you have 15 minutes to pack. It was the most difficult decision of my life, because it is forbidden for men to leave Ukraine.

Our train from Kharkiv to Lviv, as it turned out later, was the last evacuation train from our city.

My husband, who is 51 years old, just stood there and cried. I always thought that he did not know how to cry at all. The moment when the train started moving and began to pick up speed especially hit us all. He was standing there, and I was on the train with the baby.

The last photo Tanya Borodina took with her husband before she and their daughter boarded a train to Lviv without him. (Courtesy of Borodina)

It turned out that my whole life could fit in a backpack. It feels like a dream, that now I will wake up, and everything will be fine, as before. After 17 hours on the train, you don’t feel your legs and arms any more. All the food and water are gone. The train stops for one minute. Lights must not be turned on for safety reasons.

And from outside we hear sirens, sirens. Kyiv is being bombed, Lviv is being bombed. We arrive in Lviv at midnight to learn that all the free buses leave at 9 a.m. There is a curfew. We need to go further. We buy a ticket to Warsaw and wait 12 hours at the border. The phone is constantly ringing: “How are you?” “When are you coming?” “Let us know.”

In Warsaw, we were met by wonderful guys from the Masorti community. We were fed, given an overnight stay, and tickets to Berlin. We finally felt a complete sense of security when we reached Frankfurt on Oder, at the border with Poland. In Poland we were afraid to walk down the street, afraid of the sound of the tram, cars. In Berlin, we were met by people from the Masorti Berlin community. We stayed in a hotel for three days.

On the second day after we arrived, our children went to school — the Masorti Jewish school. It was a real holiday. In Kharkiv the children did not even go out into the street; there was no talk of education.

Here, everyone – absolutely everyone – tried to help us, in word, deed, advice, food, toys. Because we hadn’t taken anything with us. We even forgot our toothbrushes.

And now: Passover is coming. We have a sense of time again. And finally, our children have begun to smile. Another mother with two children from Allochka’s school was evacuated with us. They just smile; they stopped being afraid of the sound of the subway. Every morning is filled with joy because they can go to school, they can see friends, they can go to a German lesson. There is a Jewish community, Shabbat and holidays, day camps and entertainment for children. The community gave us a feeling of security, comfort, care.

This weekend we’ll attend a seder organized by Limmud in Germany.

What we dream of — probably like everyone else — is that the war ends quickly. I want to see and hug my husband, wipe away his tears and say everything will be fine: We are all alive.

Tanya Borodina
is a mother and Hebrew teacher from Kharkiv, Ukraine.
The views and opinions expressed in this article are those of the author and do not necessarily reflect the views of JTA or its parent company, 70 Faces Media.