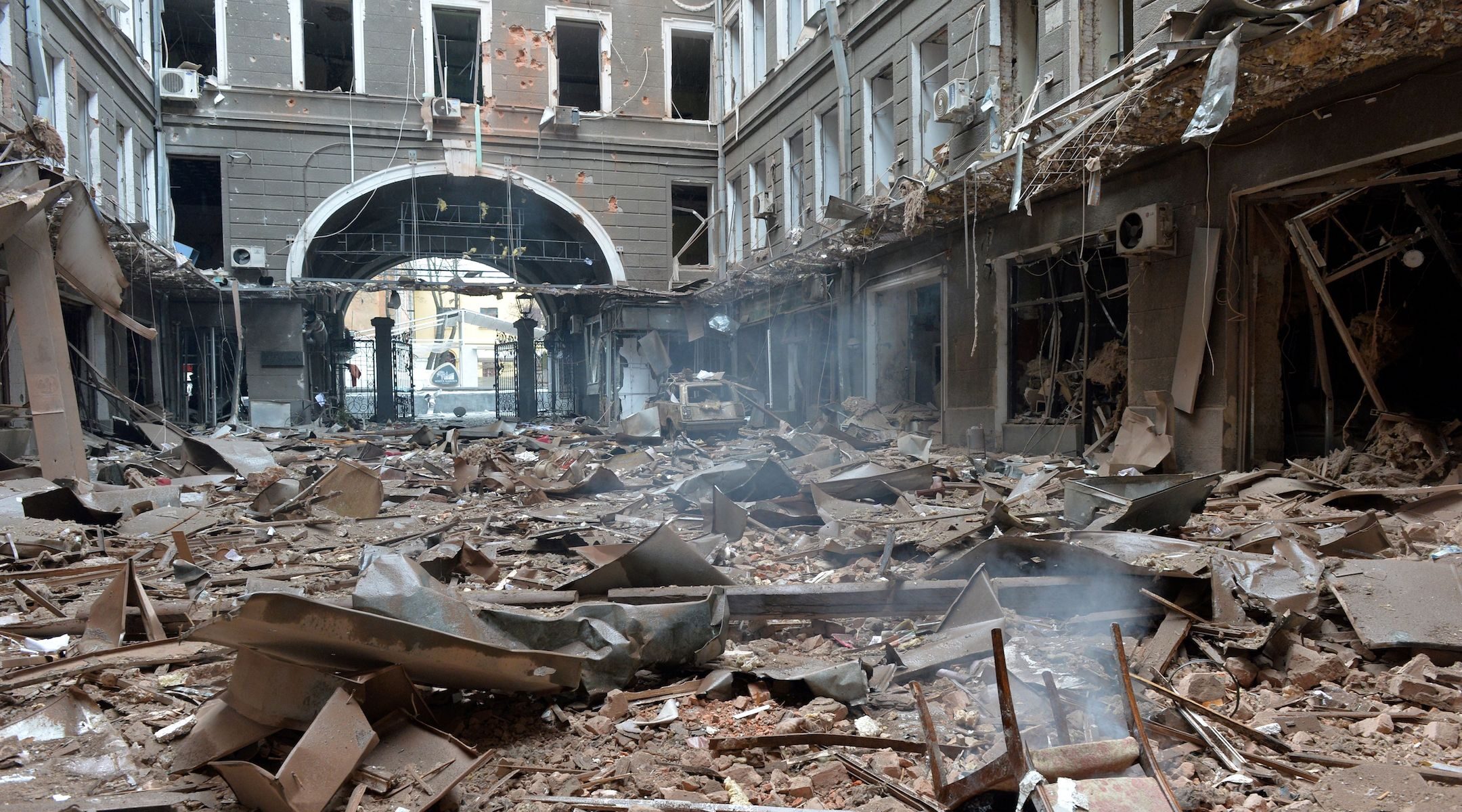 A photo shows damages to a building in Kharkiv's Constitution Square after shelling by Russian forces, March 2, 2022. (Sergey Bobok/AFP via Getty Images)
Advertisement

(JTA) — Before Russian troops invaded Ukraine, the Hillel chapter in Kharkiv was preparing to celebrate its 25th anniversary this spring. In fact, just one week ago, the group working with Jewish students and young adults was advertising a Saturday evening game night.

Now, its home has been destroyed, and Hillel International, the network of groups serving Jewish college students, is trying to figure out how to help its 600-plus students and employees in Kharkiv stay safe in their war-torn nation.

On Wednesday, the historic central Kharkiv building where Hillel has operated — located at 1 Constitution Square — was shelled and destroyed by Russian troops who are assaulting Ukraine’s second-largest city. Kharkiv sits just miles from the country’s border with Russia.

The attack was the latest evidence that sites of Jewish significance would not be spared as Russia expands its attack on civilian sites across Ukraine.

No one from Hillel was injured in the bombing, Hillel International CEO Adam Lehman confirmed to the Jewish Telegraphic Agency. He said he had seen photographic evidence of the building’s destruction and that he could not disclose details on how Hillel, the Jewish Agency and other groups were working to get Hillel students and employees to safety.

But Hillel has launched a fund to help get supplies to its employees and other Jewish refugees gathering in countries such as Germany and Poland. And the group is also working to convert Hillel spaces across the region into temporary housing for Jewish students and others displaced by the conflict, with bathrooms, showers, blankets, pillows and mattresses.

Lehman added that while the group has been in almost hourly contact with its five Ukrainian chapters throughout the conflict, the situation in Kharkiv is quickly deteriorating. According to a regional Ukrainian governor, over 20 Kharkiv residents were killed and more than 100 injured in Wednesday’s round of attacks, the fiercest yet as Russian forces try to take the city.

“In some cases, I expect that we will see [Hillel] professionals and their families finding safety in other countries. That would include places like Poland, Germany, Israel and the U.S.,” Lehman said.

Yulia Pototskaya, director of the Hillel in Kharkiv — whom Lehman called “really courageous” — told Haaretz that she would not leave the city and that some of her students were taking up arms in the fight.

“We have volunteers from Hillel, students who went to the army, and we hope that Ukraine will be saved because Ukraine is a very wonderful place,” she said.

Lehman added that not all of the Hillel students want to be evacuated out of the country.

“These are people who, in many cases, feel unbelievably committed to Ukraine as their home and as a country,” he said. “They have families, their family members have deep connections, and so it has not been as simple as trying to facilitate evacuation.”

Hillel has five outposts throughout Ukraine, including chapters in Kyiv, Lviv, Dnipro and Odessa, and several others throughout the former Soviet Union. More than 15,000 students are affiliated with 24 Hillels across the region, in countries such as Poland, Germany, Moldova and Georgia.

Unlike in the United States, where chapters are affiliated with specific universities, global Hillels function more as community centers for Jewish students and young adults into their early 30s.

Jews from around the world with a connection to Hillel Kharkiv were lamenting its destruction Wednesday after learning the news.

This is what is left of the Hillel in Kharkiv that I spent a summer volunteering at. Devastating and Infuriating. Sending so much love to our Ukrainian brothers & sisters!! #Ukraine #Jewish #HillelInternational pic.twitter.com/WE0eBaN6n3

“It’s tragic, and we are going to do everything we can not only to take care of staff, but as one of our most senior professionals in Ukraine shared with me earlier today, to hopefully get to the point where we can rebuild and maintain the strength of the Jewish community in a free and democratic Ukraine in the future,” Lehman said.