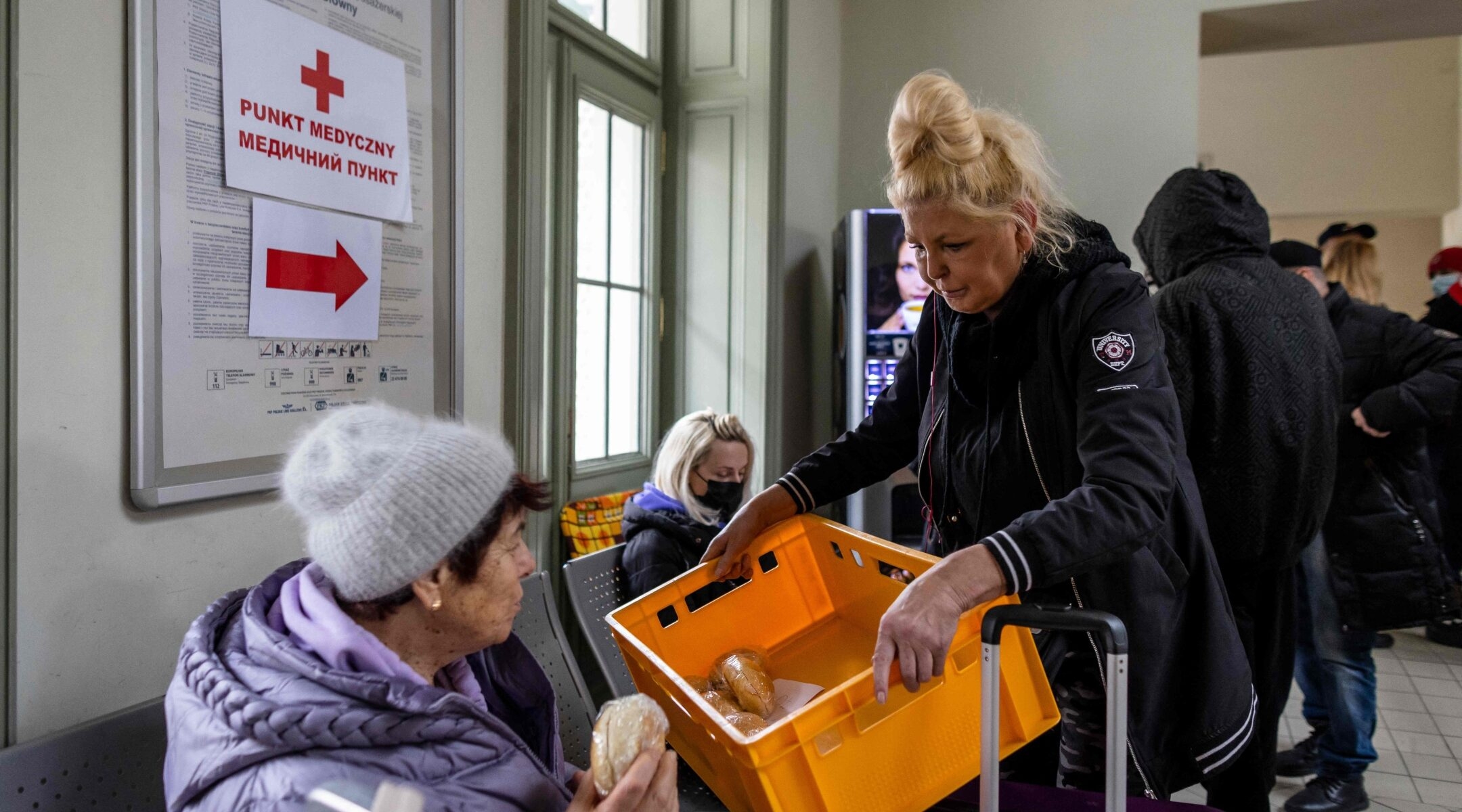 A volunteer offers sandwiches to a Ukrainian woman in the building of the main railway station of Przemysl, which has been turned into a temporary reception center for refugees from Ukraine fleeing the conflict in their country, in eastern Poland, Feb. 25, 2022. (Wojtek Radwanski/AFP via Getty Images)
Advertisement

Which is handy, because with Russia’s massive invasion of the country, its institutional knowledge about evacuating refugees is kicking in.

Melanie Nezer, the advocacy group’s senior vice president, said the group has for weeks been preparing the ground for influxes of refugees into neighboring countries, with one of its focuses on Jewish refugees.

“The focus is, if Ukrainian Jews are to leave, to make sure that they have a place to go and they’re supported,” she said in an interview Feb. 24, the war’s first day.

She said attending to non-Jewish refugees for years has provided the group with the necessary muscle memory to assist Jews in crisis. “In the last however many years, our focus has not been on the Jewish community,” she said. “But today, we are in conversations with Jewish leaders in Poland and in Moldova and in Ukraine, to make sure that we can support, with other Jewish organizations, whatever it is that the Jewish community needs. So that is certainly one of our priorities in Ukraine right now.”

RELATED: Here’s how to help the Jews of Ukraine

HIAS is one of a number of U.S. Jewish organizations that pivoted within a day of the invasion to assist Jews and others in Ukraine, through fund-raising and evacuation efforts.

Jewish federations around the country on Thursday were e-blasting constituents with links to emergency fundraising drives for Ukraine’s Jews.

“Federation and our partners on the ground in Ukraine are coordinating to ensure we can swiftly meet emerging and urgent humanitarian needs of the 200,000+ members of Ukraine’s Jewish community,”said an appeal Thursday from the Jewish Federation of Greater Washington. (Estimates of the number of Jews in Ukraine range from 43,000 to 200,000, depending on how they are counted.)

On Friday, UJA-Federation of New York, the country’s largest federation, approved up to $3 million in emergency funding for the Jewish community of Ukraine.

By the weekend, United Hatzalah, the international Jewish volunteer first response corps, had its volunteers in place on the Ukraine-Molodova border. The American Jewish Joint Distribution Committee was raising funds to attend to the needs of some 37,000 elderly Jews in the country.

An internal letter to Jewish Federations of North America constituents outlined the coordination among multiple Jewish relief bodies that was already in place on Thursday.

“JFNA’s Israel and Overseas professional team has continued to be in very close and ongoing contact with staff at JDC, The Jewish Agency and World ORT — all of whom are updating their plans in response to mounting challenges,” said the letter. “JFNA has also heard from other organizations operating in Ukraine and we are aggregating information they have provided.”

The letter said that the Jewish Agency is focusing on community security and getting Jews to Israel, the JDC is assisting the internally displaced, and World ORT is getting humanitarian aid to its students and their families.

“The exact nature and number of services needed as well as how many people will request or require different forms of assistance is not yet clear, but we are quickly getting a handle on some of the essential infrastructure and staffing costs that these operations will incur,” said the letter from Shira Hutt, JFNA’s executive vice president, and Rebecca Caspi, the organization’s senior vice president for Israel and overseas.

The organizations are also concerned about staff. The JDC and the Jewish Agency are moving their operations to Lviv, in western Ukraine. HIAS said it is seeing to the needs to the 160 or so staff of HIAS’s Ukraine affiliate, Right to Protection, also known as R2P.

“We’ve been in constant conversation with them about their staff needs, how do we keep them safe? How do we plan for an evacuation, what kind of support they would need — housing support, financial support,” Nezer said.

HIAS has largely served non-Jewish populations in recents years, but remains committed to keeping infrastructures in place for rescuing Jews, a need that seemed to have receded in decades, but which has once again become a priority in Ukraine.

Nezer said Jews from the former Soviet Union who received assistance from the agency are now among the HIAS and R2P staffers now attending to the hundreds of thousands of internally displaced Ukrainians. Thousands of refugees from other conflicts have also used Ukraine for their entry to the West. “We have a lot of staff who are former Soviet Jewish refugees from Ukraine,” she said.

Nezer said HIAS was examining ways to facilitate the intake of Ukraine refugees into the United States, and will be pressing the Biden administration to smooth visa applications for refugees for reasons of religious persecution or family reunification.

“The U.S. will have be more flexible,” she said.