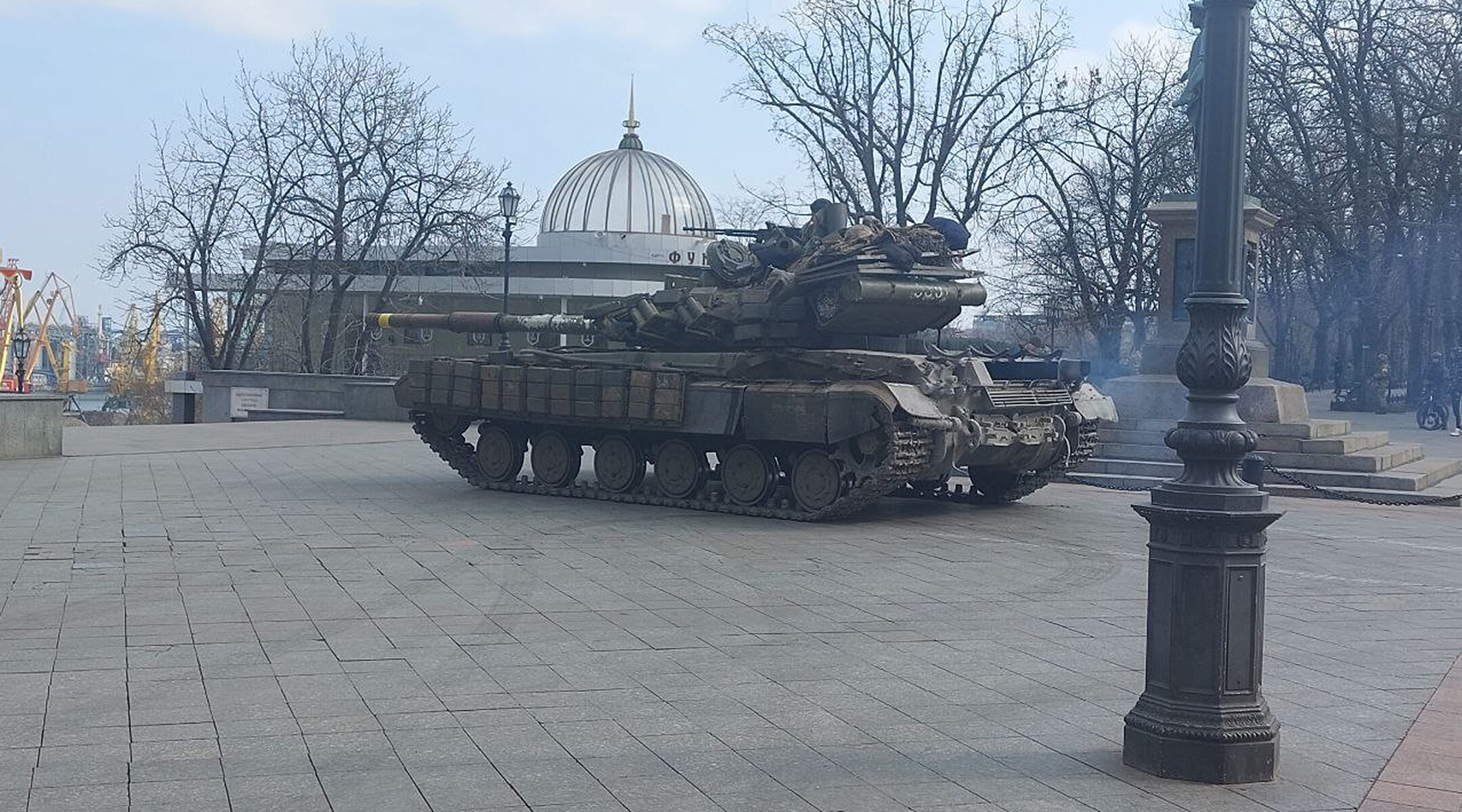 An Ukrainian military tank is seen near Potemkin Stairs in the center of Odessa after Russia's military operation in Ukraine, February 24, 2022. (Anadolu Agency via Getty Images)
Advertisement

(JTA) — On Wednesday, Rabbi Shlomo Baksht and his team were still looking into moving the 250 children of the three orphanages they run in Ukraine westward, away from the Russian border.

It was a last resort meant to get the children out of the southern port city of Odessa and the path of an impending Russian invasion and into Lviv, a city close to the border with Poland.

But by the time the Russian troops actually crossed the border early Thursday morning, the plan already appeared futile. Explosions were reported from Kharkiv in the east to Odessa in the south and even the Volyn area near Lviv in the western portion of the country. The scale of the invasion appeared to offer no escape.

“We’re not going to move children from one place being bombed to another place that’s being bombed,  that makes no sense at all,” Baksht, an Israel-born rabbi who has been living in Ukraine since 1994, told the Jewish Telegraphic Agency. “We’re going to hunker down.”

Baksht’s account of the past 24 hours underlines the helplessness and confusion that many Ukrainians are feeling as their impoverished country comes under assault by one of the world’s foremost superpowers.

For members of Ukraine’s sizable Jewish minority of at least 50,000 people, this development carries special complications. Many have family and friends who have emigrated in recent years, leaving them in relative isolation. They also have unique fears rooted in the tragic 20th-century history of their communities.

Baksht said some of the children in his care had woken overnight to the unfamiliar thud of artillery rounds exploding in the distance. They are also experiencing anxiety that Baksht and his colleagues are seeking to ease.

“We explained that there was a war but that they are not being targeted, which I believe is the truth,” Baksht said. Some were soothed by this, he said, “but others not really and the fear stayed in their eyes.” 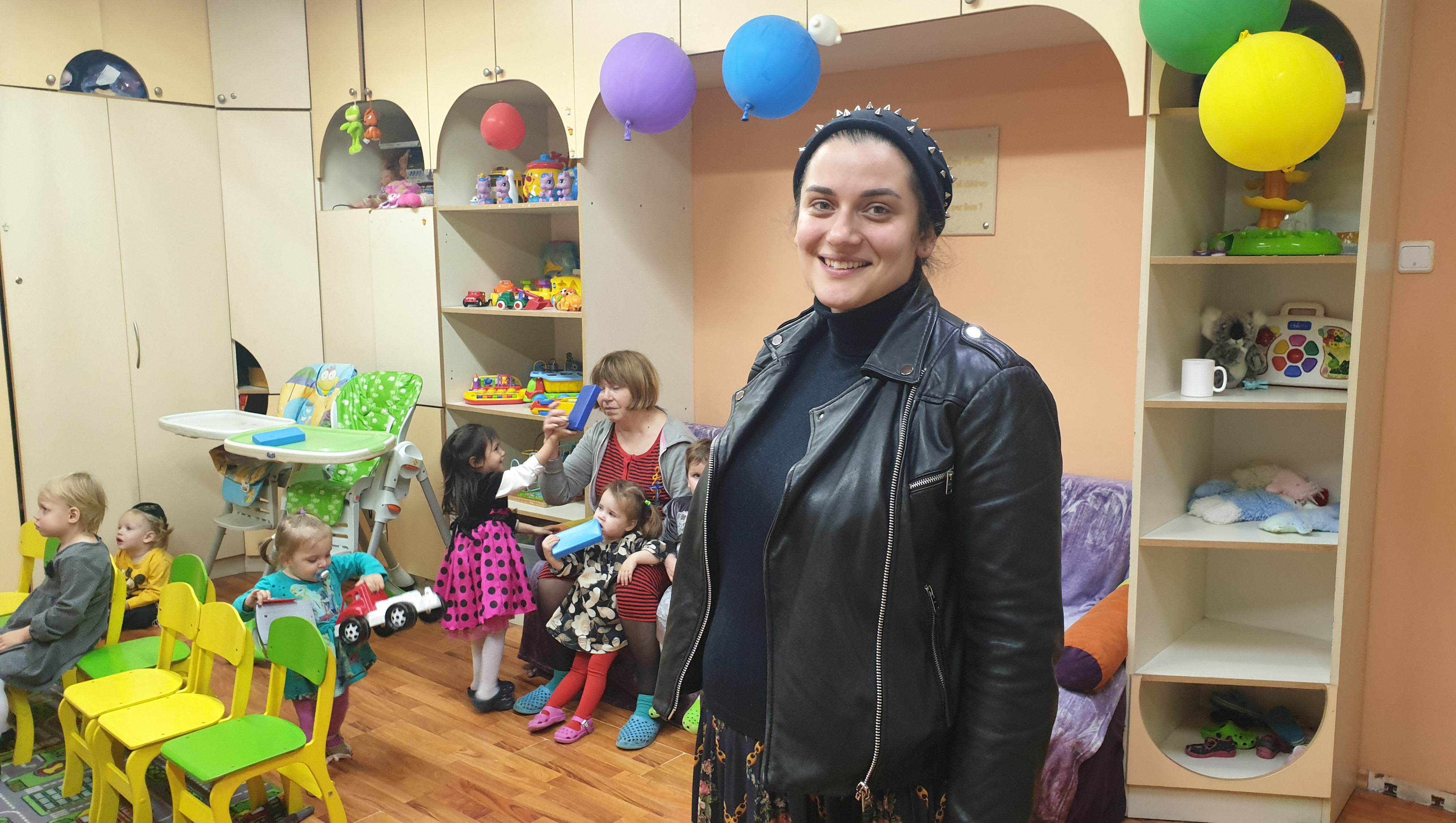 Baksht said he felt confident that he was telling the children the truth because he didn’t think that Russian President Vladimir Putin wanted “to cause civilian casualties or even bother with the major cities.”

At least in the early hours of the invasion, Baksht’s analysis seemed to be holding up, if tenuously. While explosions were reported across all of Ukraine, Russian troops appeared not to be on the ground inside Kharkiv, a city close to the Russian border, or other cities.

The scope and goals of the Russian military intervention in Ukraine, in which Ukrainian leaders said dozens of people had died, are still unclear. But Putin in a short media appearance Thursday gave no assurances as to its limitations, using language that seemed to imply sweeping action.

Russia’s military action on Ukrainian soil it meant to “protect people who have been subjected to bullying and genocide… for the last eight years,” Putin said in what was widely understood as a reference to ethnic Russians, who make up a large minority of Ukraine’s population.

“And for this we will strive for the demilitarization and denazification of Ukraine,” he said.

The incursion is the culmination of a slow escalation that began in November as Russia began amassing troops along its border with Ukraine, allegedly out of concern due to Ukraine’s relationship with the Western-led NATO bloc.

During that time, many Ukrainian Jews felt torn between their desire to stay put in connection with their patriotic sentiment toward Ukraine, and an inclination to leave for safety in Israel under its Law of Return for Jews and their relatives or elsewhere — a course of action unavailable to most non-Jewish Ukrainians.

To many of them, this tension introduced thoughts about their families’ experiences during the Holocaust — the darkest chapter in Ukrainian Jewry’s generally bloody and tragic history.

It made Rabbi Alexander Dukhovny, the 71-year-old leader of the Reform movement in Ukraine, think about his mother, a Holocaust survivor. “Her relatives, who all perished, stayed even though they had a chance to flee, preferring to stay with their ancestors’ property,” Dukhovny told JTA in January. 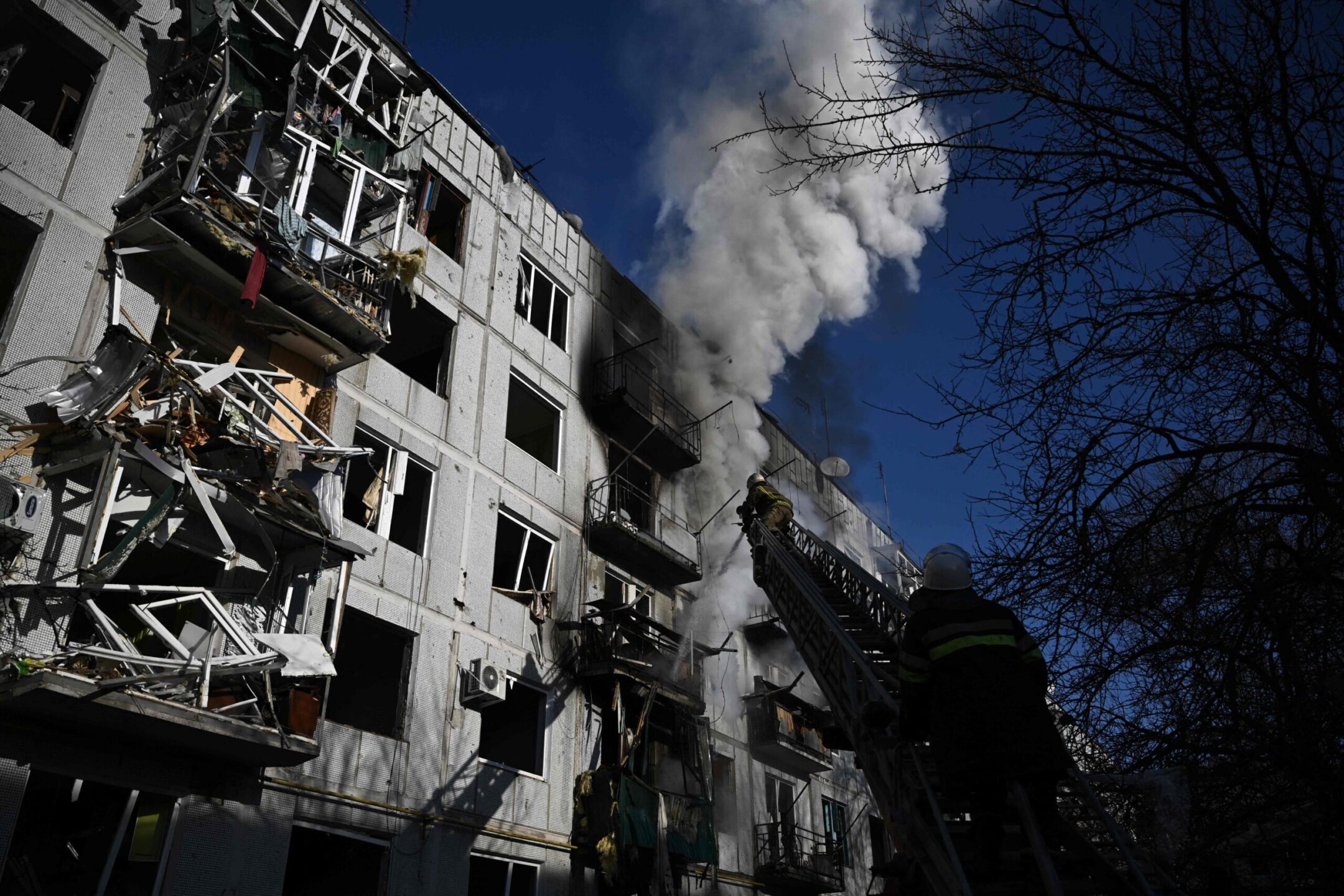 Firefighters work on a fire on a building after bombings on the eastern Ukraine town of Chuguiv, Feb. 24, 2022, as Russian forces attacked Ukraine from multiple directions. (Aris Messinis/AFP via Getty Images)

The next month, Vlodymyr Zeev Vaksman, a Jewish father in Odessa, said he was simultaneously making plans to leave with his family and to stay put, depending on the circumstances.

“I put off making any big purchases. I want to buy weapons,” Vaksman, 40, told JTA on Feb. 14. But he said he was also collecting documents for his entire family so they could leave for Israel quickly.

Attempts to reach Dukhovny and Vaksman on Thursday were not immediately successful as millions of Ukrainians were left unable to access cellular services and the internet amid the shelling of infrastructure facilities and a rolling cyber attack by Russia.

Elderly Jews and people with Jewish roots, of which there are tens of thousands in Ukraine, are likely to be among the among the worst-affected segments of the country’s population by the isolation and anxiety caused by the Russian onslaught, according to Amos Lev-Ran, a senior employee of the former-Soviet-Union division of the U.S.-based American Jewish Joint Distribution Committee charity, or JDC, which is a major provider of care to needy Jews in Ukraine.

“They tend to lack a network of people around them, because of people who died,” Lev-Ran said. He noted that the size of Ukraine’s current Jewish population is a mere fraction of what it used to be before the collapse of the Soviet Union, when the territory that it now Ukraine saw hundreds of thousands of Jews leave for Israel.

Hesed, the name of JDC’s agency in charge of caring for needy, mostly elderly Jews, has about 37,000 recipients, or clients, in Ukraine.

The problem of isolation, now exacerbated by the anxiety and communication interruptions induced by the Russian assault, had already worsened during the COVID-19 pandemic, which is still raging in Ukraine, Lev-Ran said. It prevented many elderly clients from leaving their homes for weeks.

One of them was Tamara, a 76-year-old retired teacher from Odessa who now relies on a monthly pension of $86 since the death of her husband two years ago. A volunteer with the JDC’s hotline for relieving the loneliness of clients during the pandemic, in recent weeks she also heard from Ukrainian Jews who were anxious about a possible conflict with Russia, Lev-Ran said.

Sending the already-weakened national currency of Ukraine, the Hryvnia, into further decline, the conflict has eroded the limited buying power of needy Jews like Tamara, Lev-Ran said.

This in turn has led to JDC stepping up its aid, adding $4.4 million in aid spending since November.

”As things worsen, those needs are becoming more pressing,” he said. “Millions more will be required to continue care and address emerging needs like displacement and psycho-social care.”