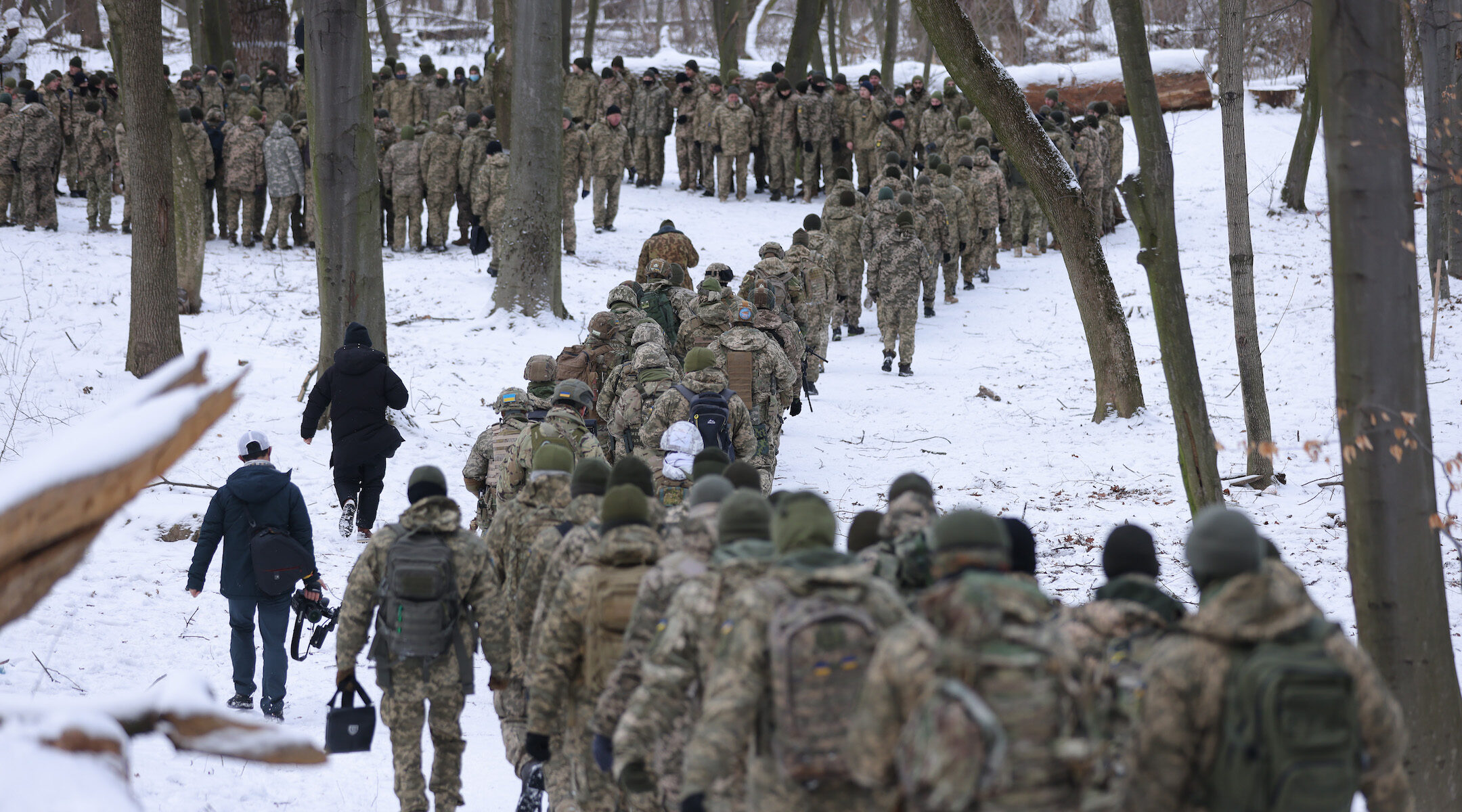 (JTA) — The military standoff between Russia and Ukraine is escalating as Jews in both countries prepare to commemorate International Holocaust Remembrance Day on Jan. 27, the day that Soviet troops liberated Auschwitz in 1945.

The coincidence is an annual reminder of the complicated legacy shared by Russia and many countries in its orbit.

But to some Ukrainian Jews, it’s also a mental note to stay vigilant, plan for the worst — and prepare to move fast out of harm’s way amid growing fears of an invasion by the hundreds of thousands of Russian troops that President Vladimir Putin has amassed in recent weeks along the border.

The situation is making Rabbi Alexander Dukhovny, the 71-year-old leader of the Reform movement in Ukraine, think about his mother, a Holocaust survivor.

“Her relatives, who all perished, stayed even though they had a chance to flee, preferring to stay with their ancestors’ property,” Dukhovny said.

There are also reasons for optimism, Dukhovny said. There’s a feeling that the United States and United Kingdom, which have warned Russia against invading Ukraine and are reportedly considering sending troops to the region, “are not abandoning Ukraine,” he added. “So I’m ready for everything. And if the worst really happens, we have a homeland: Israel.”

Israeli officials are also planning for a scenario of an armed struggle in Ukraine, according to Haaretz. On Monday the Israeli paper reported that Jewish Agency officials have met with government representatives to discuss the possibility of airlifting Jews eligible to make aliyah, the word in Hebrew for Jewish immigration to Israel, out of Ukraine.

Jewish headlines from around the world: Sign up for JTA's newsletter.

Such plans have been around since 2013, when Ukraine’s government fell as a result of a bloody revolution against the regime of president Viktor Yanukovych, whose critics said was a corrupt Russian stooge. In 2014, Russia invaded the Crimean Peninsula and annexed it, citing, among other reasons, alleged nationalism by Ukrainian “neo-Nazis” that Russia said threatened the area’s 10,000 Jews.

Thousands of Ukrainian Jews have left Ukraine for Israel since then, many of them from areas affected by the fighting. Ukraine, whose population is about 42 million people, has approximately 56,000 people who self-identify as Jews, according to a 2020 demographic survey by the London-based Institute for Jewish Policy Research.

Russia also has backed rebels who set up secessionist enclaves in 2014 near the Ukrainian-Russian border, in Donetsk and Lugansk, areas which remain outside Ukrainian sovereignty to this day.

The 2013-2014 conflict inflamed nationalist sentiment on both sides of the border, which some observers say is complicating life for Ukrainian Jews. The country’s Jewish population are mostly native speakers of Russian, not Ukrainian, and are seen by many ethnic Ukrainians as “Muscovites,” a commonly-used euphemism with antisemitic undertones. 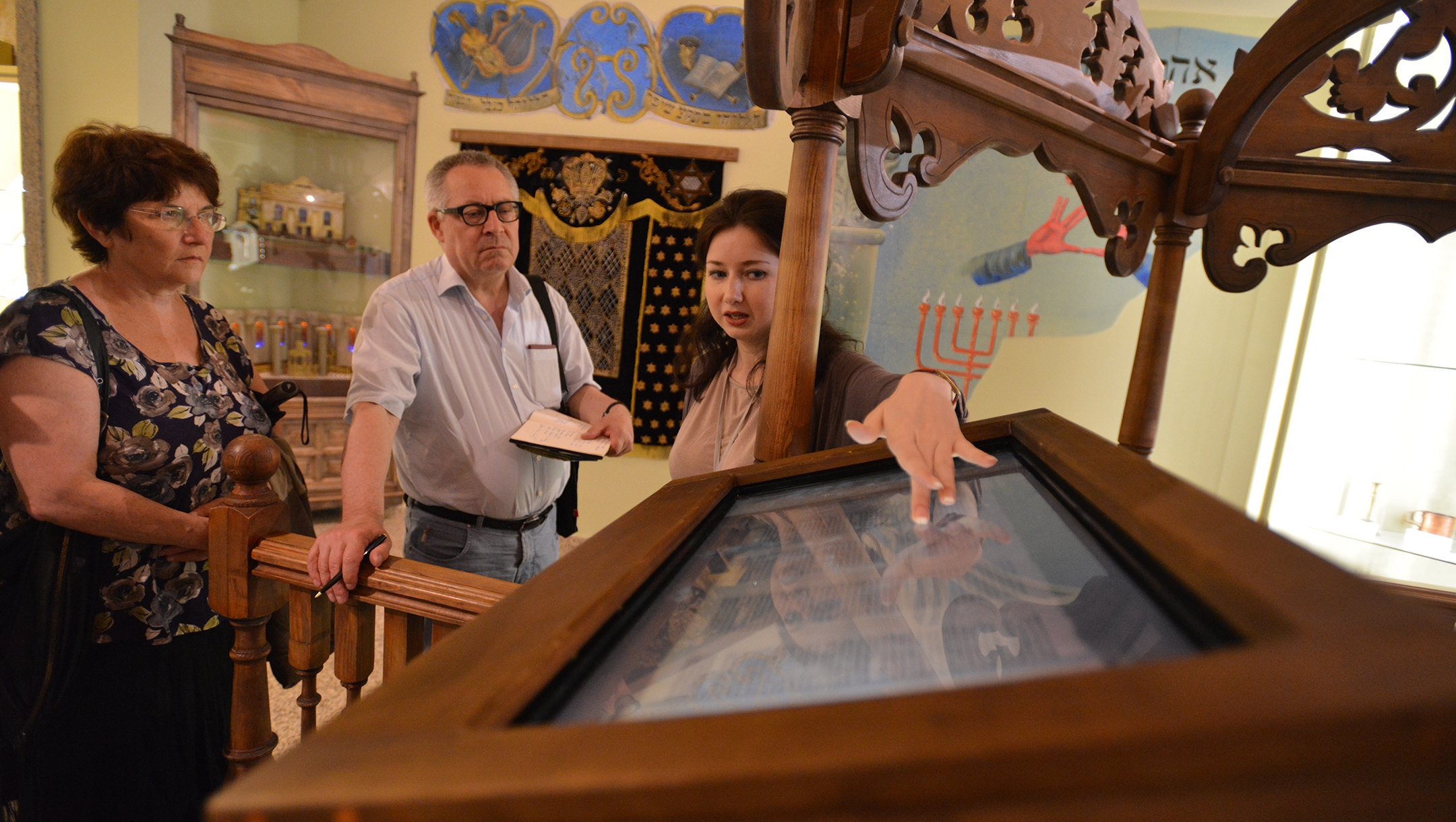 A guide explaining to visitor about the Holocaust at the Tkuma museum in Dnipro, Ukraine, May 20, 2014. (Cnaan Liphshiz)

Ukrainian President Voldymyr Zelensky, who is Jewish, was elected in 2019 to replace the post-revolutionary government of hardliner Petro Poroshenko. An affable comedian, Zelensky was backed by supporters who hoped that his centrist policies would help rebuild an economy devastated by the conflict and mend relations with Russia.

But the failure of peace talks and the effects of COVID-19, which foiled any bid to grow the Ukrainian economy amid Russia’s attempts to hold it back, has dashed those hopes and hurt Zelensky’s popularity. Elected with a majority of over 70%, he now enjoys an approval rating of about 30%.

The deployment of Russian troops since November may be an attempt to exploit or compound that weakness – or it may just be one of Putin’s periodic attempts to rattle Ukraine’s cage as part of a long-term strategy of psychological attrition.

The current round is likely to damage Ukraine’s attempts to project stability more than previous attempt. Foreign embassies, including that of the United States, have begun to evacuate the families of staff or nonessential staff as other embassies, including Israel’s, have reached out to their citizens in Ukraine to be put on extraction lists in the event of hostilities breaking out. (Ukraine called such evacuations “premature” and “a display of excessive caution.”)

But on the street in Kyiv, the Ukrainian capital, “there are no signs of war, only snow,” said Dukhovny. “The reality is normal, but there’s a snowball effect when you hear about what embassies are doing, etc. You feel that something terrible is coming.”

As a rabbi, he tries to “calm members of my communities without giving them a sense of false security,” Dukhovny said. “We need to be vigilant and keep our eyes open, but we can’t panic or it will be just as dangerous as not doing anything.”

Due to COVID-19, which is generating a fifth wave of infections in Ukraine, many synagogues are operating mostly online regardless of any additional concerns of violence from Russia, Dukhovny added.

In the country’s east, closer to the Russian border, Ukrainian troops are also being deployed in response to the Russian moves. The army, sometimes with civilian volunteers, has beefed up its trenches in strategic parts near the border, according to France 24, in yet another historical throwback to 20th-century wars.

Igor Schupak, the director of the Tkuma Holocaust museum in the city of Dnipro, can’t help but see parallels between the current conflict and the one that his institute is devoted to commemorating and documenting.

“We are under a propaganda war, in which there is constant talk on where Russia will invade, where it might strike,” Schupak, 60, told JTA on Monday. “It’s almost funny, but the logic is most reminiscent, I’m afraid, of the tactics of the Nazis in the 1930s: Generating fear of violence before the actual violence to weaken the rival.” 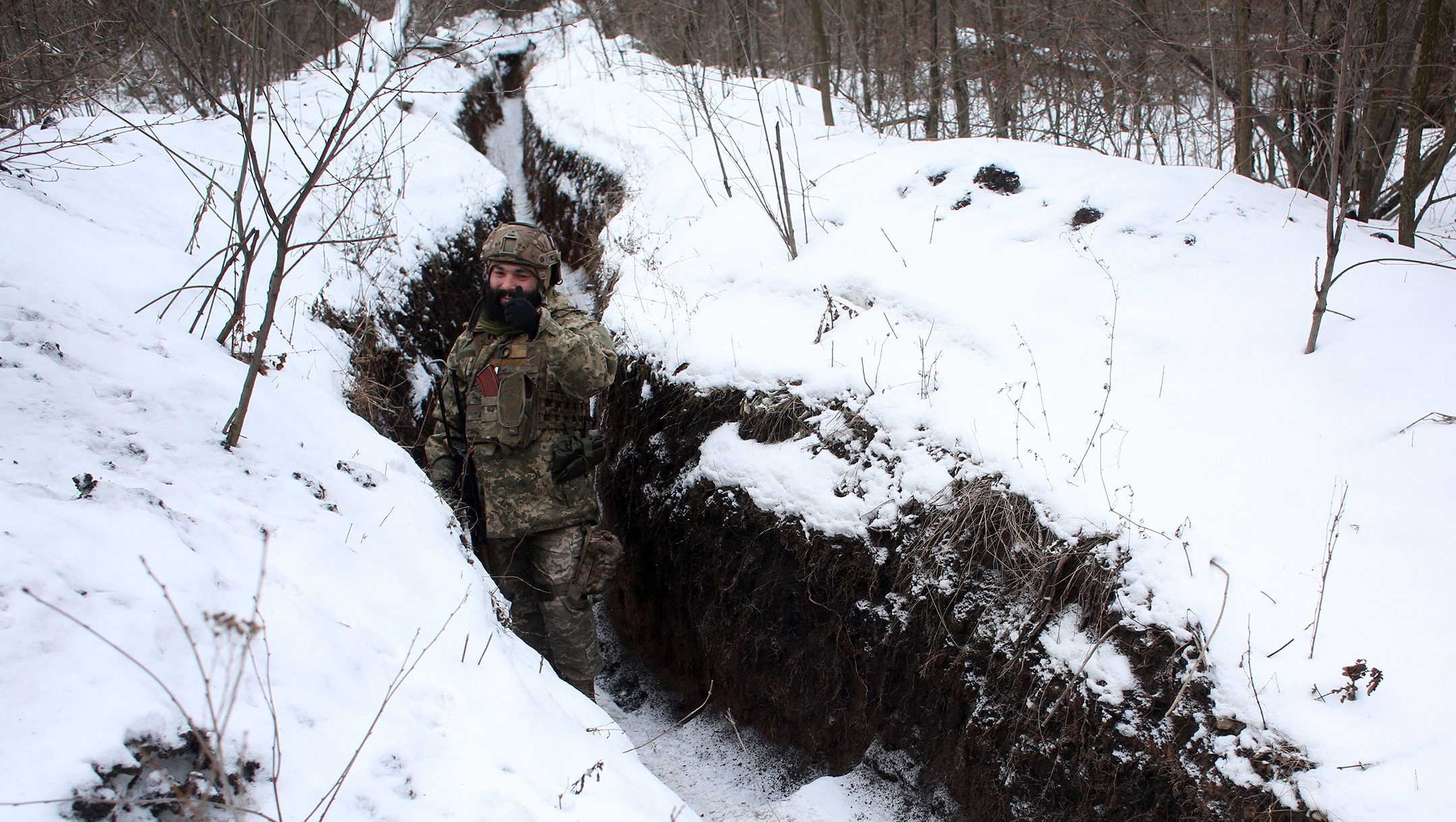 An Ukrainian soldier gives the thumbs-up as he stands in a snow covered trench on the frontline with the Russia-backed separatists near Zolote village in the eastern Lugansk region, Ukraine, January 21, 2022. (Anatolii Stepanov / AFP via Getty Images)

Mindful of field security issues, Schupak declined to say whether he has noticed any preparations for warfare in or around Dnipro.

The justification for the envisioned violence is also similar to the one put forward by the Nazis, Schupak argued.

“It’s presented as designed to ensure the rights of ethnic Russian. Just like Germany spoke about Silesia,” Schupak said.

But, he added, “those who look too closely for parallels will always find them.”

For now, Schupak and his staff are “continuing as planned, making last preparations to our International Holocaust Remembrance Day events and ceremonies with survivors and witnesses.”

And what will Schupak, an outspoken critic of Russia and supporter of Ukrainian sovereignty, do if he finds himself in the path of a Russian invasion?

“I don’t know. I’ll have to wait and see, and decide in the moment,” he said.