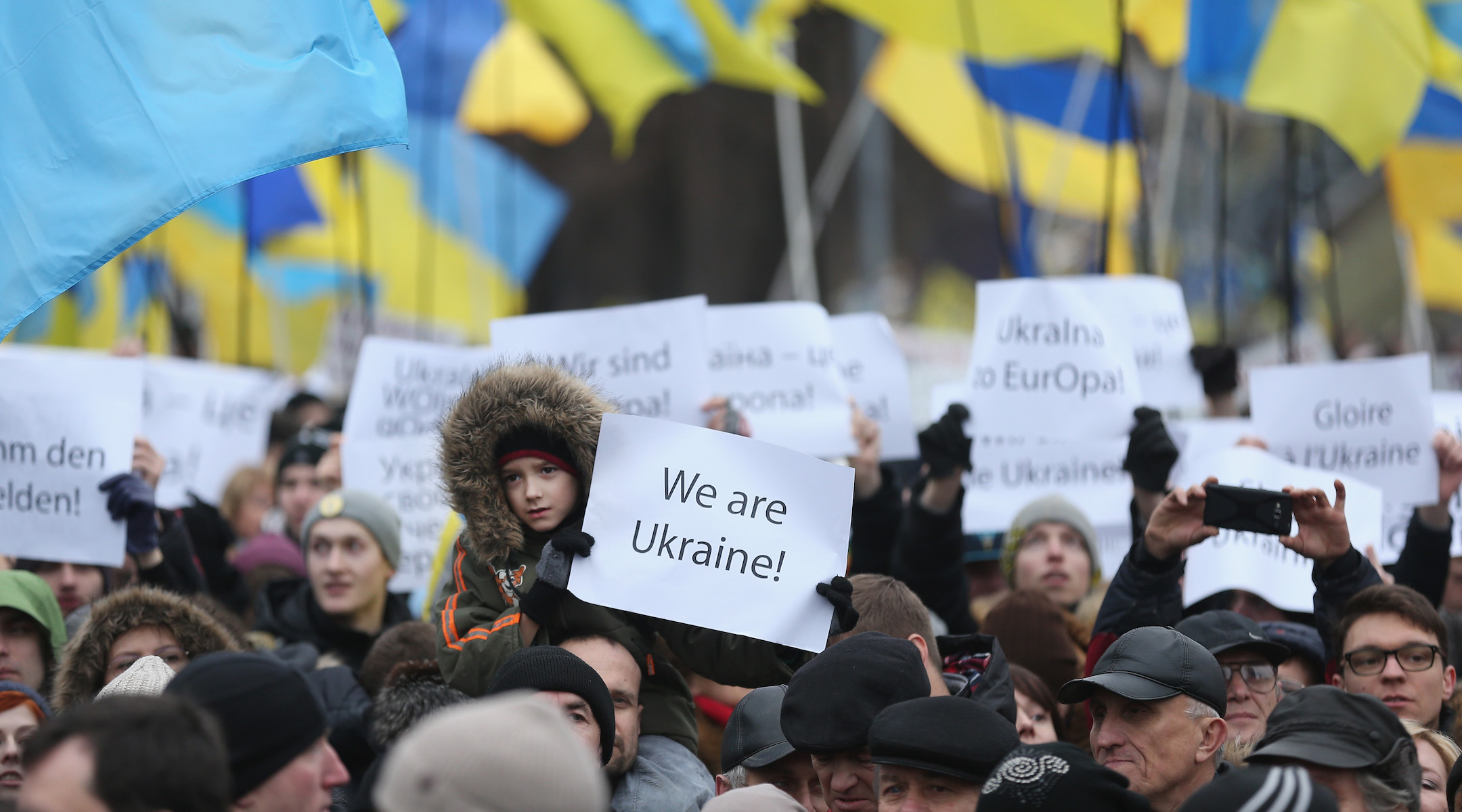 (JTA) — Ukraine is in the news now for its ties to the Trump impeachment scandal, but this year also marks the fifth anniversary of a turbulent revolution that roiled the country and ousted its then-president.

In 2014, anti-government demonstrations became violent, and clashes with police led to the deaths of dozens of protesters. Ukraine’s parliament voted to oust President Viktor Yanyukovych, and voters elected Petro Poroshenko — who was replaced earlier this year by Zolodymyr Zelensky, the country’s first Jewish president.

Sam Sokol, a Jewish Telegraphic Agency correspondent based in Israel, published a book this summer about the revolution titled “Putin’s Hybrid War and the Jews: Antisemitism, Propaganda, and the Displacement of Ukrainian Jewry.”

JTA’s Europe correspondent, Cnaan Liphshiz, interviewed Sokol about his book and how Ukraine’s Jewish story is intertwined with the larger currents that led to the revolution.

JTA: Can you tell me why you decided to examine the upheaval through a Jewish perspective? Beyond an account of how Jews felt during the revolution, how does this particular aspect help readers understand the broader conflict? 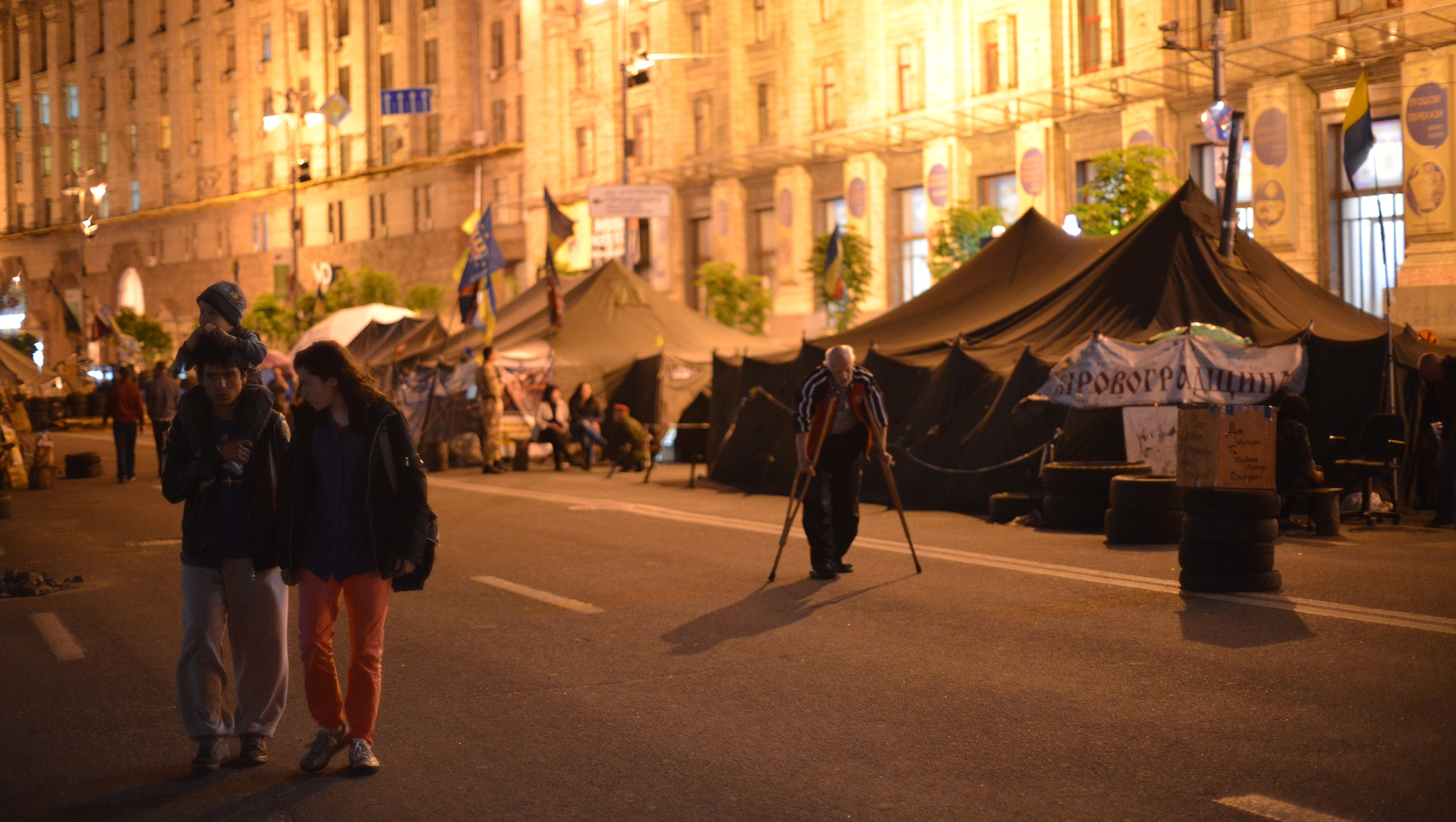 Residents of Kyiv, Ukraine at Maidan square on May 14, 2014. (Cnaan Liphshiz)

Sokol: I think it’s important for a few reasons.

One, the Russians weaponized anti-Semitism during the conflict. The Kremlin’s war was what is commonly referred to as a hybrid war, a combination of low-intensity proxy conflict, disinformation, propaganda, and political and economic pressure. Part of the disinformation campaign was an effort to divide Ukrainians along ethnic and religious lines and delegitimize the Ukrainians by painting them as Nazis and fascists. The Russians planted fake news stories about imaginary anti-Semitic incidents and allegedly engaged in anti-Semitic provocations. In response, the Ukrainians lobbed similar accusations against the Russians. The Jews found themselves used by both sides.

Second, the Ukraine conflict is a perfect case study in the way post-Soviet governments have sought to build heroic narratives around the efforts to fight against communism. Often these efforts involve the rehabilitation of Holocaust collaborators and the downplaying of local complicity in the genocide. Studying Ukraine helps us better understand wider regional trends.

Finally, Jewish communities that had worked hard to re-establish themselves after communism found themselves shattering under the pressure of armed conflict. Thousands of Jews became refugees and communities in the separatist areas lost most of their members to the flood of Ukrainians seeking refuge outside the war zone. The story of how these communities ravaged by pogroms, the Nazis and the communists only to rebuild and then find themselves destroyed is a tragic one that must be told.

What lessons do the situation of Jews in Ukraine offer Jews elsewhere?

I think there are two main lessons to be learned from Ukraine. First, when Jews are in trouble, it behooves the larger Diaspora to get involved. There were a few large organizations that helped resettle the Jews of eastern Ukraine, but it was not a banner issue for most Jewish organizations. Many Israeli and American Jews had no idea anything was happening at all.

The second lesson relates to the politicization of anti-Semitism. As the Russians intensified their efforts to paint the Ukrainians as violently anti-Semitic, the Ukrainians became increasingly unwilling to place the blame for any anti-Semitic incidents on their own people. This led to a situation in which any substantive discussion on combating anti-Semitism was essentially frozen. It behooves Americans to learn from the Ukrainian example.

How did the Jewish leadership in Ukraine react to the revolution? Did they embrace it right away or gradually as regime change loomed likelier?

There was a wide range of views regarding the revolution. Some leaders, especially Orthodox ones, warned their congregants to stay out of politics. Others, like Josef Zissels of the Vaad of Ukraine, were active supporters. After the revolution, when Russia attacked, the Jewish community rallied behind the government. While many felt it was prudent to stay out of domestic political conflicts, it’s much harder to take a neutral line when fighting an outside aggressor and all citizens are expected to line up in support of their country.

Do you think that Jewish communities paid a price for their initial dithering? Is their support seen as opportunistic?

I don’t believe so. At one point, as you yourself reported, government officials even held up an ultra-Orthodox soldier as a paragon of the Ukrainian soldier for propaganda purposes. 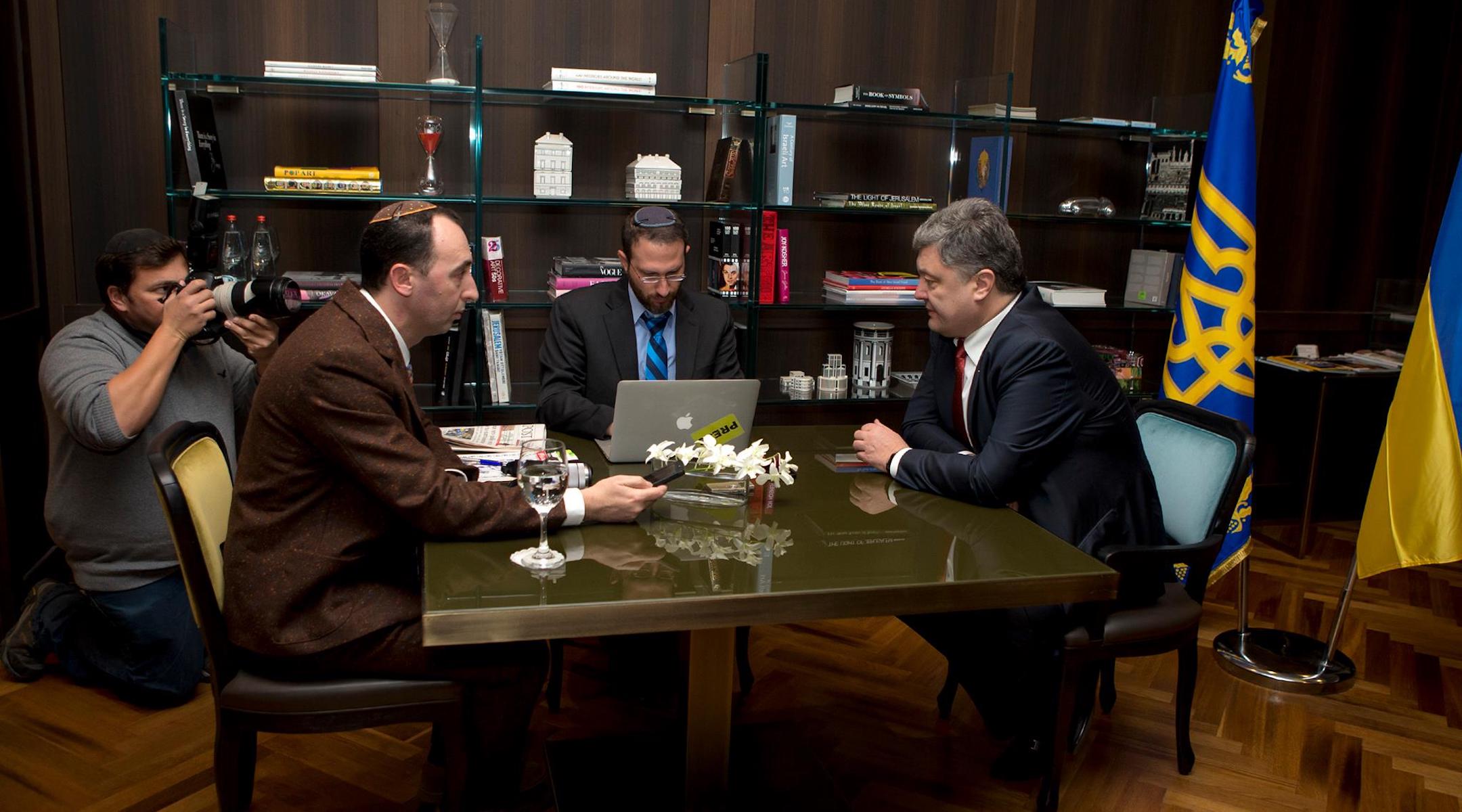 Your book does a great job illustrating how Russian propaganda used, and in some cases invented anti-Semitism for its needs. But it also demonstrates the existence of anti-Semitic sentiment that some believe is turning Ukraine into a regional trouble spot. For all their deception, do the Russians have a point about anti-Semitism in Ukraine?

The best disinformation contains a kernel of truth. Ukraine has shown itself to be willing to tolerate anti-Semitic groups that will fight on its behalf. Recently, the country’s prime minister attended a neo-Nazi concert to benefit veterans of the war against Russia. And there were a series of violent anti-Semitic incidents in Kyiv during the revolution. Synagogues and graveyards have been desecrated. And Holocaust collaborators have been rehabilitated.

At the same time, Jews have risen to high government positions and been feted as heroes. Anti-Semitism in Ukraine is a problem, but many local Jews I know, including some who are very outspoken about the issue, don’t seem to be worried about their physical safety. Things aren’t as happy and safe as the Ukrainians would have us believe, but neither is the country turning into a sort of Nazi state like the Russians are claiming.

Do you think Jews are now better off in Ukraine compared to before the revolution?

There has been a tendency among some Ukrainians to embrace a non-ethnic understanding of nationhood, which bodes well for the Jews. Overtly anti-Semitic parties like Svoboda are no longer in Parliament. This is good. But the impunity with which far-right movements operate (including patrolling the streets in some cities) is worrying. The biggest issue facing Jews today are the same as those facing their non-Jewish neighbors: corruption, economic hardship and the war in the east.

How do you explain the fact that, despite Ukraine’s anti-Semitism problem, it elected a Jewish president in Volodymyr Zelensky?

Most Ukrainians seem to care less about ethnicity and more about getting someone into power who can fix their problems. The fact that Zelensky’s Jewish identity wasn’t a big campaign issue is impressive in its own right. He was a big celebrity with a large fan base. He was known for playing an honest man who became a politician and tried to clean up corruption on his sitcom. Some of that image probably rubbed off on him when he ran for real. However, as far as I understand it, most Ukrainians didn’t vote for him so much as vote against his wildly unpopular predecessor. They wanted a reformer and didn’t care much about ethnic issues.

Many Ukrainian Jews I’ve spoken to are proud that one of their own is president, but at the same time wary of an anti-Semitic backlash if he fails to deliver. Do you expect Jews to pay the price for Zelensky’s failures?

It’s a real worry that people have. I won’t say if I agree or disagree because I’m wary of prognostication, but it’s a legitimate concern. I hope that Ukraine has progressed enough that should he fail, he will bear the blame as an individual and not a representative of the Jews of his country.