In Ukraine, young Jews are torn between fighting for their country — and leaving for another 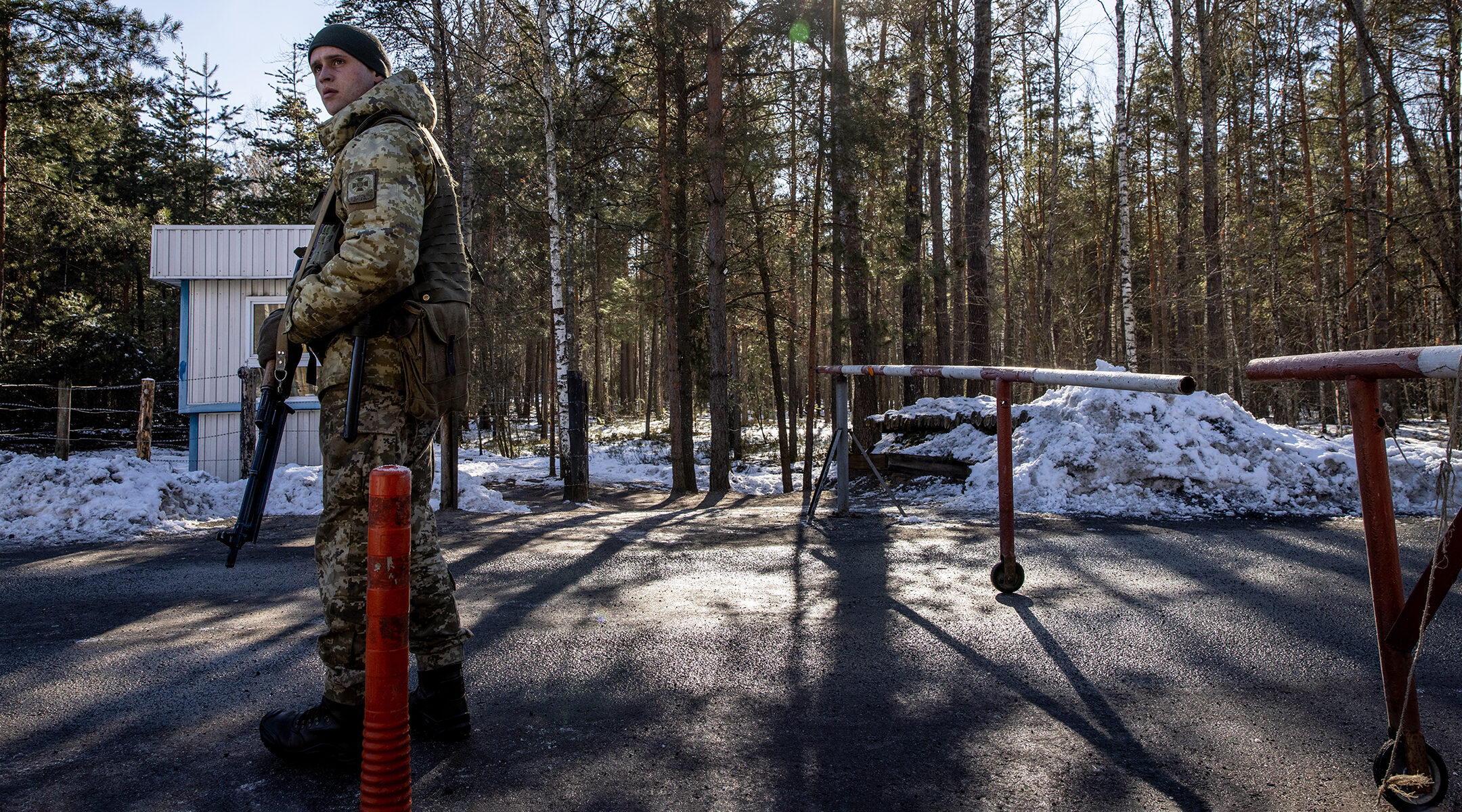 A member of the Ukrainian State Border Guard stands watch at the border crossing between Ukraine and Belarus, Feb. 13, 2022. (Chris McGrath/Getty Images)
Advertisement

(JTA) -– As world powers work to defuse the military buildup between Ukraine and Russia, Vlodymyr Zeev Vaksman, a Jewish father in Odessa, is focusing on a personal arms race.

Vaksman, who works as a tour guide, is typical of many young Ukrainian Jews: Attached to their country, they’re hesitant to abandon it when it’s threatened. But, mindful of how quickly it can descend into violence, sometimes along sectarian lines, they also are unwilling to leave their family’s safety to the authorities and chance.

“Everyone is worried,” Vaksman told JTA about his circle of Jewish friends. “Some want to resist and join the defense units. Some want to leave.”

Russia has been amassing troops on the Ukrainian border since November, leading many to fear that the country could be headed for a bloodier version of what happened when Russia invaded in 2014 and seized Crimea.

Like the United States, Israel is exhorting its citizens who are in Ukraine — there are as many as 15,000 of them — to vacate the country. On Tuesday, the Israeli airline Arkia is scheduled to dispatch one of its passenger planes on an emergency flight to Kharkiv, an eastern Ukrainian city. It will leave empty and return with any Israeli interested in returning.

Meanwhile, the Jewish Agency is reportedly making contingency plans to evacuate Jews who wish to leave in the event that tensions erupt into a full-blown war. Ukraine has about 43,300 people who self-identify as Jews and about 200,000 eligible to immigrate to Israel under its Law of Return for Jews and their relatives, according to a 2020 demographic study of European Jewry.

A prominent Israeli rabbi is using the crisis to convince Ukrainian Jews to make aliyah, or immigrate to Israel. But on the ground, most Ukrainian Jews appear to be approaching the situation pragmatically, not ideologically.

“It would be good” for anyone who so desires to leave Uman for “a vacation until it is safe,”  Rabbi Ya’akov Djan, who is also an Israeli, wrote to Jews in the city where a predominantly Israeli Jewish population has grown up around the burial place of Nachman of Bratslav, an 18th-century Hasidic rabbi. But he added that anyone who does not wish to leave should not feel pressured to do so.

Among those on vacation in Israel right now are the wife and daughters of Chaim Chazin, a real-estate professional who was born in Israel and has been living for several years in Uman with his wife, Liat, and their seven children. They left two weeks ago for a family event and decided to extend their stay in Israel “just to be on the safe side until the situation stabilizes,” Chazin said.

Chazin himself says he is confident in the leadership of Ukraine’s Jewish president, Vlodymyr Zelensky, and believes that the current tensions are overblown.

“There’s fuel in the fuel stations, food in the markets, toilet paper and medicine in the stores,” Chazin told JTA. “The only ones freaking out are people who are following the conflict from outside Ukraine.” 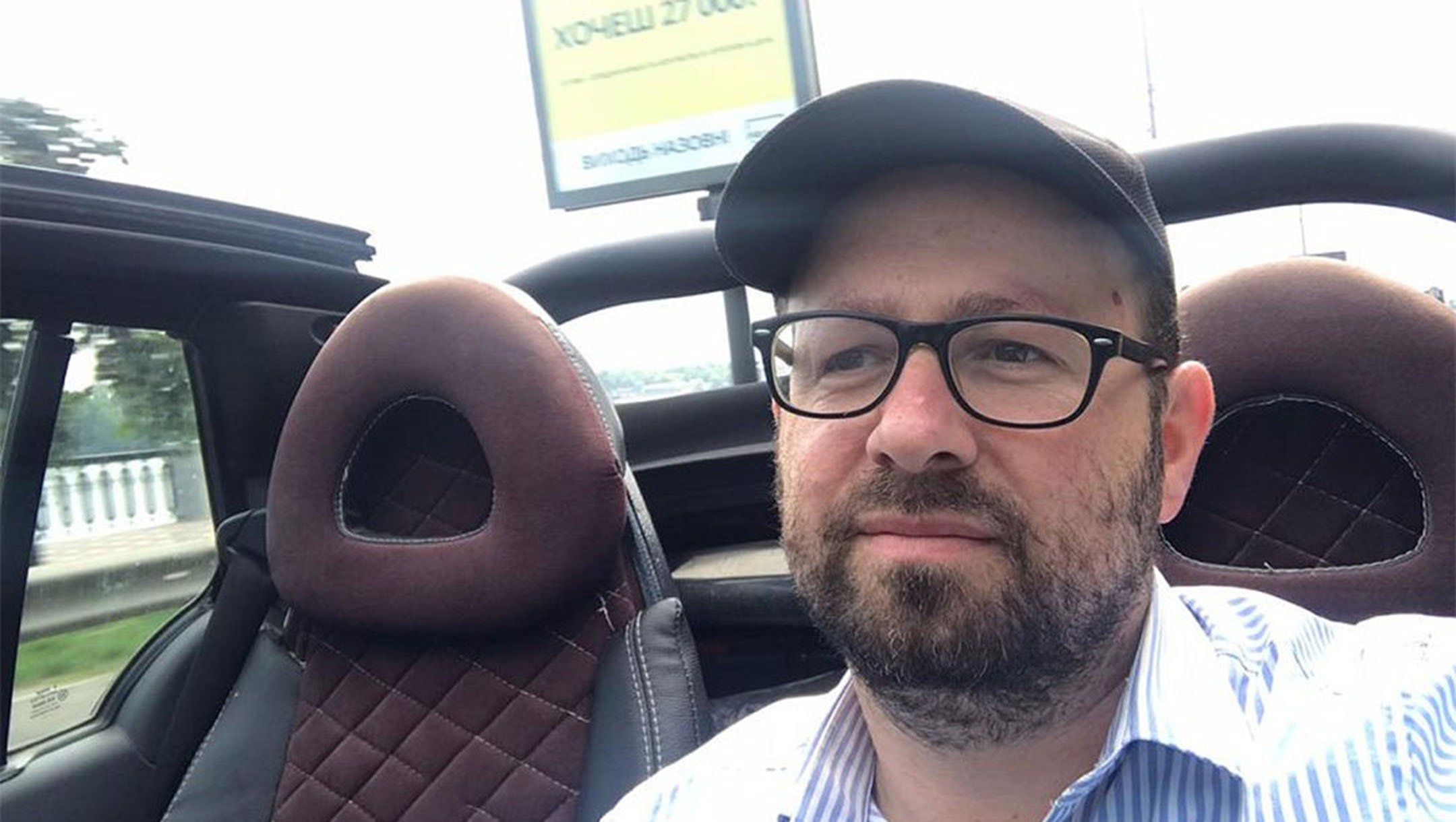 He said he thought Djan’s letter was intended to encourage tourists who have come to Uman as pilgrims to Nachman’s grave to head home. “We don’t want them becoming the community’s problem in case of complications. Very few of us are leaving,” Chazin said.

Instead, he said, the local community is planning around concerns that, in the case of a Russian invasion, “all the law enforcement will be rushed to the border and we’ll be left exposed to robbers or whoever.”

Chazin said local Jewish leaders were working with Uman authorities on a plan to set up “some sort of armed guard, maybe with an AK-47 or two. We have some graduates of combat units of the Israel Defense Forces with us.”

In Kharkiv, an industrial city situated a mere 10 miles from the Russian border, the likelihood of an invasion is only now beginning to trickle down, according to Miriam Moskovitz, an emissary of the Chabad-Lubavitch movement who has lived in Kharkiv with her husband, Rabbi Moshe Moskovitz, since 1990.

“There’s been some general talk about how to prepare but now we’re really sitting down with plans about where people will go in times of danger, in terms of which buildings to put them in and what to do with the synagogue,” Moskovitz, a mother of 12 originally from Australia, told JTA. “We’re not afraid but we’re definitely sensing the tension right now.”

As with other Jewish communities, the one in Kharkiv, where about 20,000 Jews live, is focusing on making sure the elderly population and other vulnerable groups remain safe if traveling local roads becomes dangerous, she added.

As tensions rise, the Moskovitzs find comfort in the fact that even through the escalation, hundreds of worshipers come each day to the Kharkiv Choral Synagogue — a red-brick complex with a dome that resembles the condensed Jerusalem models of sculptor Frank Meisler.

“We do what we can, what we came here to do: We hold up Jewish life and make it happen no matter what,” she said.

As for Vaksman, he’s not eager to move to Israel, where he says he cannot afford to live. (It is not uncommon for Jewish Ukrainians who have moved to Israel to return because of the cost of living.) But he’s keeping the option open.

In addition to working to procure guns, he said, he has “prepared money, documents for the children and even the cats” to board a rescue flight if they need to.