For elderly Jews in the former Soviet Union, COVID-19 lockdown loneliness is debilitating 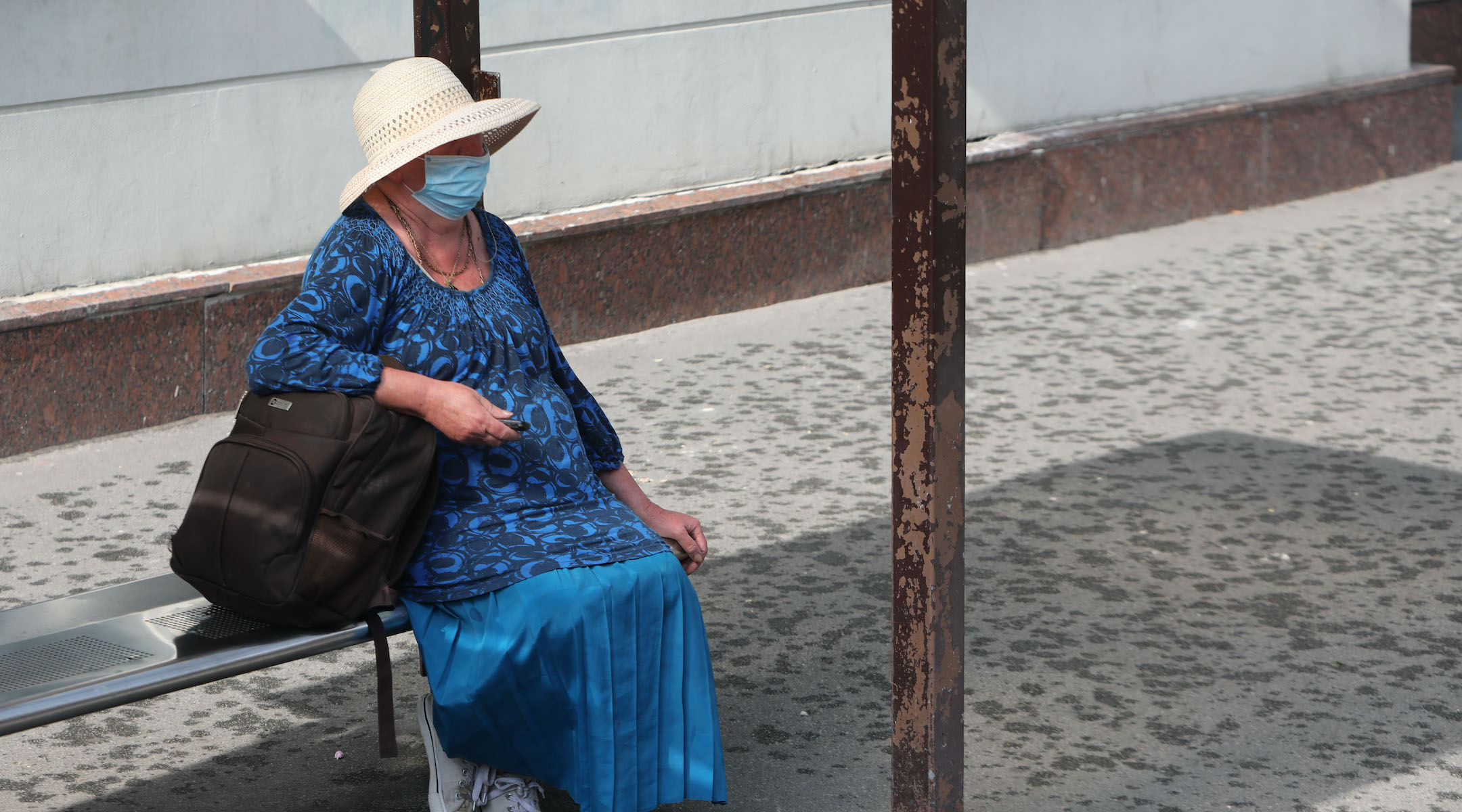 (JTA) — Tamara Boronina, an 82-year-old Holocaust survivor living in Ukraine, can barely afford her small Odessa apartment on her monthly pension of $65.

She is a widow whose only daughter died in 1999. Unable to visit the local Jewish community center that has been her social lifeline, Boronina now eagerly awaits the weekly visit by her caseworker from the JDC, the American Jewish Joint Distribution Committee.

“The worst loss this virus and quarantine has brought for me is isolation,” Boronina said of the COVID-19 pandemic. “I am a very sociable person and communication is even more important for me than material assistance.”

The former Soviet Union has about half a million Jews, most of them living in Russia and Ukraine. Many thousands of them are elderly and have decided to pass up the opportunity to immigrate to Israel or the United States because they feel too old to readjust to a new country.

The JDC, a 106-year-old Jewish international aid agency, was born in 1914 to assist exactly those types of Jews who found themselves mired in difficult circumstances at the start of World War I. It helped Jews flee Nazi Germany beginning in 1933. Some 80,000 German Jews escaped Europe altogether with the help of the JDC, whose work now with victims of Nazi persecution is funded in part by the Claims Conference, a body that represents world Jewry in Holocaust restitution negotiations.

Later, when the Soviet Union collapsed in the early 1990s, the JDC was only reliable source of aid for many who were plunged into extreme poverty. It also has helped thousands of non-Jews survive in the wake of natural disasters, such as the 2010 earthquake in Haiti.

So the agency has plenty of experience with providing food and medicine in war zones, earthquakes and the like. The trickier part, JDC officials said, has been relieving the loneliness and isolation that the crisis has meant for the elderly Jews in that part of the world, who are feeling the loss of cultural and social frameworks.

Before COVID-19, the JDC had offered them things such as yoga, gymnastics, pottery, language and painting classes, and the benefit of socialization, through a network of dozens of Jewish community centers and day centers.

“They’re confined to four walls, some in dilapidated homes. For some, the will to live is slipping away,” said Michal Frank, the executive director of JDC in the former Soviet Union.

“Before the virus, they could either go to the Jewish community center or, if they were homebound, receive home visits from the JDC caseworker. For some, the virus has either complicated that or made it impossible. We’ll be dealing with the effect this is having on their mental condition for a long time after this is over.”

In response, the organization has set up COVID-19 hotlines manned by trained volunteers, one of the only programs of its kind for the region’s elderly Jewish population.

There are six call centers, including ones in the Ukrainians cities of Odessa and Dnipro, as well as in Chisinau, the capital city of Moldova. Working off a list of elderly clients who get regular aid from JDC, volunteers and staff chat for about half an hour with each person they call and make sure they have what they need. 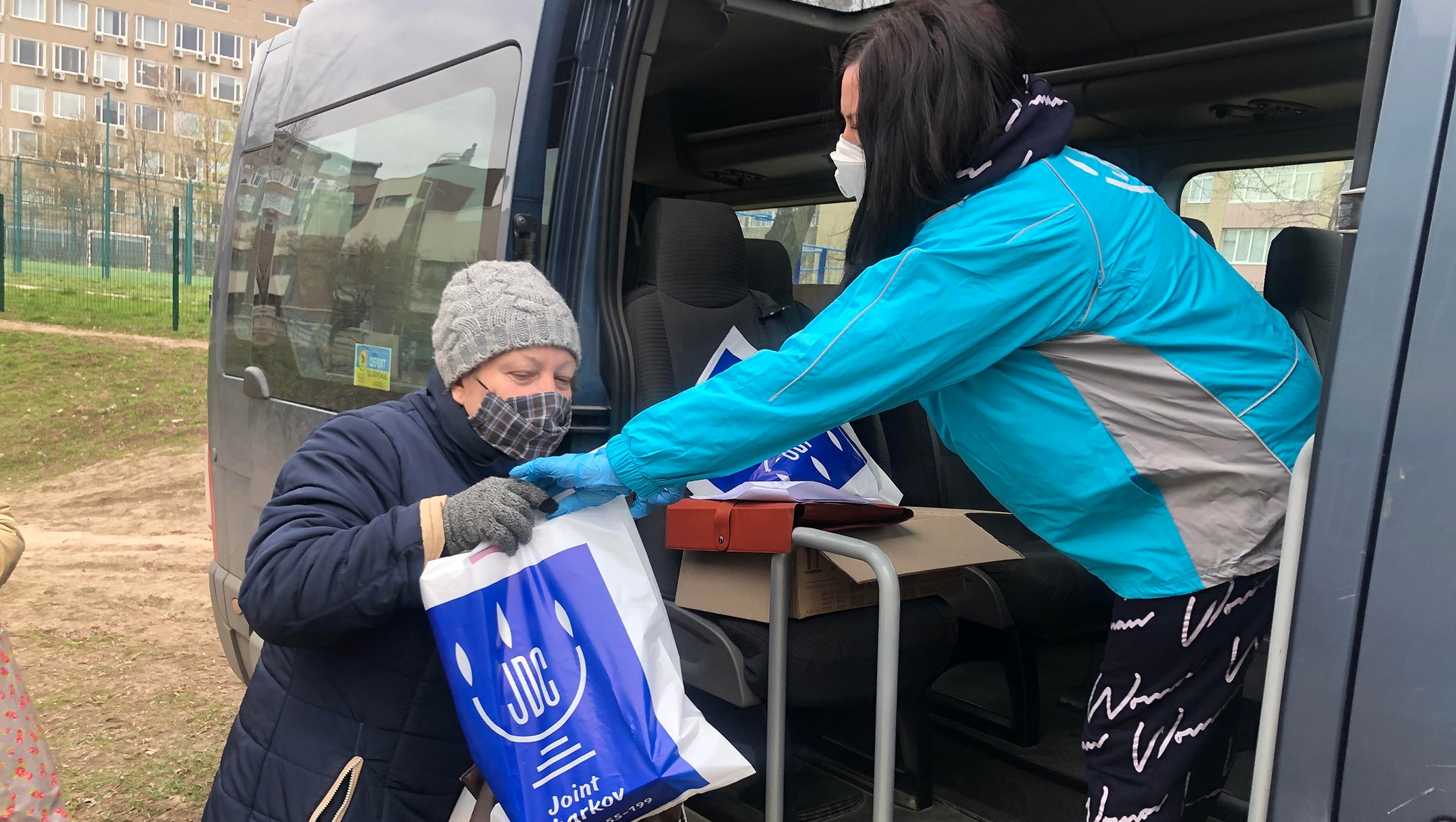 A JDC employee, right, delivers an aid package to a Jewish woman in Kharkiv, Ukraine, March 2020. (Courtesy of the JDC)

Across the former Soviet Union, additional Jewish communities and groups also have launched emergency services to help vulnerable populations through the coronavirus. Organizations affiliated with the Chabad-Lubavitch movement, which constitutes a major force for post-Soviet Jewry, have been churning out thousands of meals and providing protective gear to at-risk elderly Jews for weeks in Ukraine, Russia and Belarus.

One Chabad project for young volunteers, EnerJew, also attempts to address the isolation issue. Its members have been assigned elderly community members to check up on regularly by phone and sometimes on their doorsteps, under social distancing limitations.

EnerJew activists have delivered more than 2,500 packages to needy Jews in the former Soviet Union, along with doorway chats and follow-up telephone calls, according to the project’s director, Konstantin Shulman.

Russia and Ukraine have recorded about 8,200 deaths and 1,000 deaths, respectively, from COVID-19, placing them low on the table of world fatalities per million inhabitants. Those two countries have about 500,000 Jews, but fewer than 100 of them have died from the virus.

So far, JDC has recorded 17 coronavirus-related deaths among its elderly subjects in the former Soviet Union. One JDC employee has died from the disease, and several other JDC staff have been infected but survived, a JDC spokesperson said.

JDC’s Jewish community centers and day centers are closed to the public, but many of them still feature activities, conducted under social distancing limitations, that are broadcast live on the internet. (It’s not clear at this point how many people over 70 and 80 are able to enjoy these broadcasts, Frank said.) In Ukraine, a JDC initiative called the Leadership Alumni Programs is also planning to hand out tablet computers to dozens of elderly clients.

Nadya Gassilina, 80, who also lives in Odessa, is another recipient of JDC aid. Caseworkers leave supplies for her on her doorstep, so she doesn’t need to leave her home amid the pandemic.

“The quarantine has changed our life dramatically,” Gassilina said. “Our day center was a window to the outside world for me.”

Phone calls and home visits help, Gassilina and Boronina said. But they are counting the days until they can return to socialize.

In some Jewish communities, volunteers in JDC frameworks, supported by the Genesis Philanthropy group, came up with their own projects to help alleviate loneliness. In Gomel, Belarus, for example, the JDC volunteer center began a series of Facebook posts for the elderly with manuals on how to get online services, like home-delivered grocery shopping.

A Zoom instructional video showed elderly viewers how to order online medications to be delivered to a nearby pharmacy in Gomel. From there, JDC volunteers picked up the order and delivered it to the older adult’s address while maintaining social distancing.

The workarounds generally help, according to Svetlana Ignatyeva, a 74-year-old from Odessa. But they’re no substitute for being a part of the “bigger family” she found at her local day center.

“How can just a taste be enough when you are used to a big meal?” she asked.