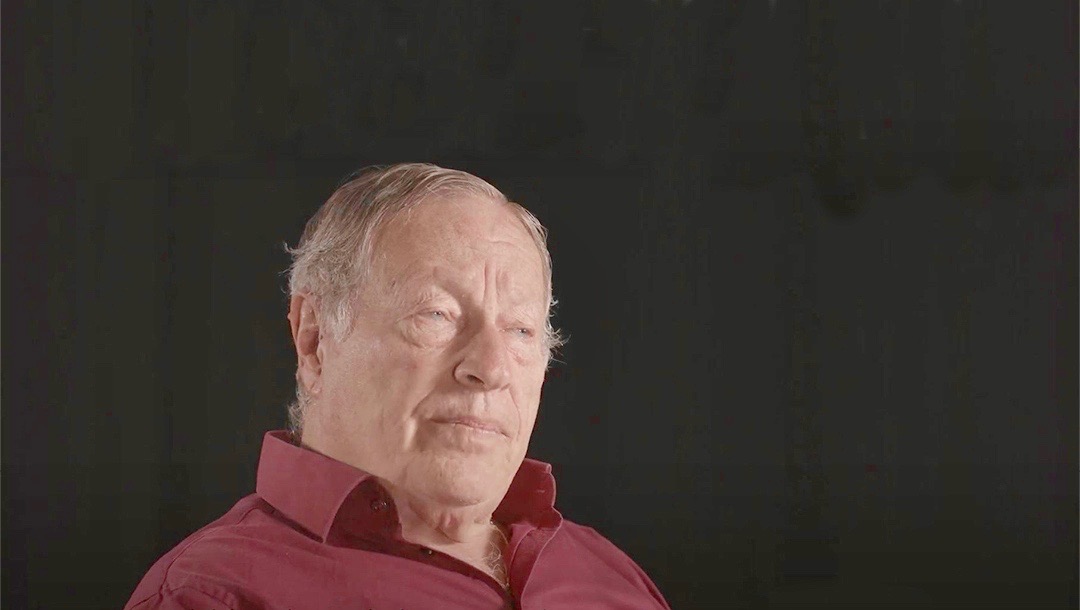 Holocaust survivor György Bánhidi appears in a video on a new website recounting his ordeal in the Budapest ghetto in Hungary in 1944. (EMIH)
Advertisement

(JTA) — It has been 77 years since Nazi collaborators marched György Bánhidi and his family from their spacious home in Budapest into the city’s Jewish ghetto.

But Bánhidi, who is now 84, remembers even the tiniest details from that short trip to a place where he endured months of hunger, and the trauma of watching his mother give up her hope of ever surviving.

Most of all, he remembers the feeling of being taunted and mocked by Hungarian soldiers camped out just outside the ghetto, who cheered as their fellow collaborators herded Jewish families into the urban enclosure.

To this day, Bánhidi revisits the “awful feeling of our own countrymen mocking us, spitting at us, throwing things at us,” whenever he passes near that area of the Hungarian capital, where he still lives today.

His testimony and that of 76 others are featured on a new website. Created by the EMIH Association of Hungarian Jewish Communities, the site commemorates the anniversary of  when Budapest’s Jews were rounded up by the pro-Hitler Arrow Cross militia and local police.

The website is part of multiple memorial initiatives by Jewish groups, national governments and international organizations ahead of Jan. 27, the anniversary of the liberation of the Nazi death camp of Auschwitz.

The United Nations designated Jan. 27 as International Holocaust Remembrance Day in 2005, and in recent years, the day has taken on greater public significance. In contrast with  Yom Hashoah, the Jewish Holocaust commemoration that usually falls in April, International Holocaust Remembrance Day draws attention from non-Jews, making it an opportune time for Holocaust survivors and Jewish groups to deliver messages to a broad audience.

MTV and CBS are launching new Holocaust memorial specials, starring the Jewish actress Julianna Margulies as host. The American Jewish Committee trained people who work at former concentration camps on how to use TikTok, the social media network that has been plagued with Holocaust denial and antisemitism, in order to bolster Holocaust memory and awareness.

The Conference on Jewish Material Claims Against Germany announced a new social media campaign in partnership with Israel’s Yad Vashem Holocaust authority, featuring two-minute videos about the non-Jews who risked their lives to save Jews during the Holocaust.

First-ever Holocaust memorial events are being held in Egypt and Azerbaijan. In the United States and beyond, Holocaust survivors and their children are speaking to local student groups. And special commemorations are planned across Europe, where the murder of 6 million Jews took place.

The Memorial and Museum Auschwitz-Birkenau, a Polish state institution, is planning a small commemoration ceremony at the site of the former Nazi death camp near Krakow. Due to COVID-19 restrictions, only a handful of survivors will attend the ceremony, which will be livestreamed on a dedicated website, the museum’s spokesperson said.

Observers say the COVID-19 pandemic and a proliferation of comparisons between public health restrictions and the Nazis’ persecution of the Jews point to the need for expanding Holocaust awareness.

Since 2020, at least 60 million online engagements have been recorded with posts trivializing the Holocaust, often in the context of the pandemic, according to a report published last week by the Combat Antisemitism Movement — an international nongovernmental organization whose advisory board includes former Jewish Agency chairman Natan Sharansky and former U.S. Sen. Joseph Lieberman.

In multiple rallies in Europe and beyond against COVID-19 measures, protesters have worn uniforms resembling those worn by Auschwitz inmates and other symbols from that camp.

In Israel, where Yom Hashoah is a national day of mourning, the European Union delegation to Israel and Yad Vashem observed the international commemoration at a screening last week of a documentary film exploring the sexual exploitation of inmates at Auschwitz.

Titled “Love It Was Not,” the film focuses on Helena Citron, a Holocaust survivor from Slovakia who died in 2007, and how she survived Auschwitz partly thanks to her intimate relationship with a German SS officer.

“As the last Holocaust survivors are leaving us, we need to find new ways of remembrance,” EU Ambassador to Israel Dimiter Tzantchev said at the screening in Jerusalem, which was also attended by a niece of Citron, Miki Marin. Such films “can play an important role in this endeavor,” Tzantchev added.

The Manhattan-based Olga Lengyel Institute, known as TOLI, is scheduled to host an online seminar on Jan. 26 with the cooperation of the Ghetto Fighters’ House Museum near Akko, Israel.  The panel will discuss the Lonka Project, an initiative in which 300 acclaimed photographers trained their lenses the dwindling number of Holocaust survivors alive today.

The European Jewish Congress held a commemoration ceremony online that included a speech by French President Emmanuel Macron. International Holocaust Remembrance Day is about fighting not to repeat past mistakes, he said.

That fight, Macron said, “has unfortunately become a reality once more, as ill winds have risen again, as political discourse has set in, as falsifications of history are back, and as certain acts remind us on a daily basis that we have not finished this battle. We will yield no ground.”

The Brussels-based European Jewish Association held a commemoration event with dozens of lawmakers from across the European Union in Kyiv, the capital of Ukraine, which is currently facing the threat of a Russian invasion.

The deputy prime minister of Ukraine, Olha Stefanishyna, alluded to tensions with Russia at the event, reminding her listeners Monday that the Holocaust ultimately was among the tragedies “inspired by a tyrant.”

It is not important only to remember, but to make sure no other tragedies facing the democratic and free world should” happen, she said. She added: “Have your governments avoid these tragedies of people who are dying and suffering.”

In his testimony for the Hungary project, György Bánhidi also recalled how his father clung to religious faith that the family would survive as his mother descended into despair, repeatedly telling her son and his sibling that “we’re all going to die.”

His father, meanwhile, “from morning to night … kept saying ‘God will help us, God will help us,’” recalled Bánhidi, whose nuclear family was among the rare Jewish families to emerge intact after the Holocaust.

Out of about 800,000 Jews living in Hungary before the Holocaust, some 565,000 were murdered within a short space of time, including 424,000 Hungarian Jews who were killed in eight weeks in 1944 at the Auschwitz-Birkenau complex.

“As it turned out, he was right because God did help us.” Believing in survival, he added, “this is the only thing. You must remain positive, never give up the conviction that it will all come to an end and another time will come when we can live more peacefully.”