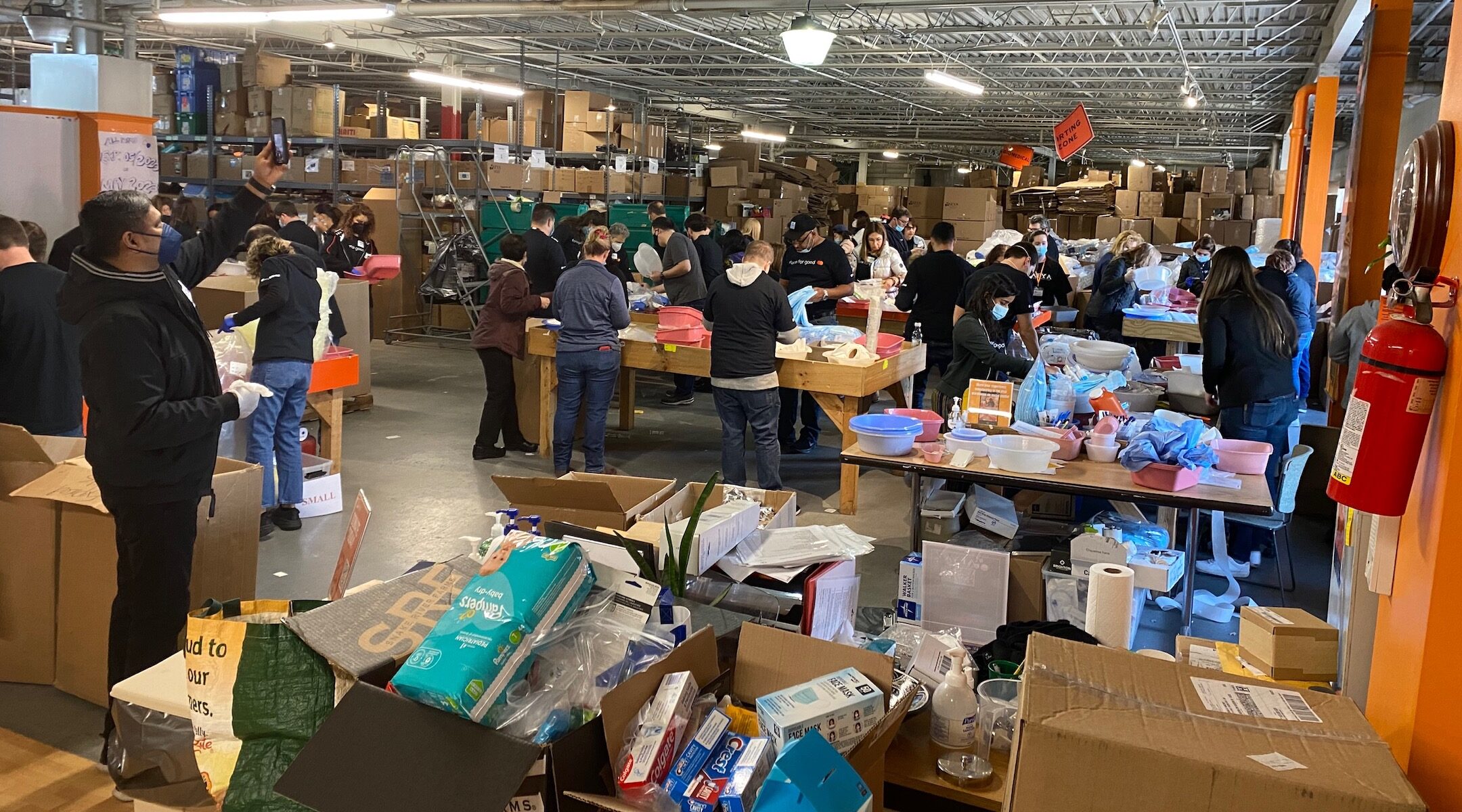 Local rabbis and volunteers are preparing to bring large suitcases full of medical supplies, food, and humanitarian aid for refugees on the Ukrainian-Polish border on a mission to assess the needs of organizations on the ground. (Courtesy UJA)
Advertisement

(New York Jewish Week via JTA) – Nineteen local rabbis will depart to the Ukrainian-Polish border this weekend to distribute food and medical supplies to Ukrainian refugees. They will also provide rabbinical support to Jews fleeing the Russian invasions, and assess the current and future needs of Ukrainian refugees.

The trip is being organized by the UJA-Federation of New York. Since Feb. 24, the organization has announced $5 million in grants allocated to assist in humanitarian aid for Ukrainians.

The coalition rabbis represent synagogues in New York City, Long Island and Westchester. Arriving on Sunday and leaving on Tuesday, the group will stop in major refugee transit hubs in Poland, including Przemsyl, Lublin and Srodborow.

Several rabbis sent emails to their congregations asking for donations of goods to bring to Poland. As one of the few female rabbis on the trip, Rabbi Rachel Timoner, the senior rabbi at the Reform Congregation Beth Elohim in Park Slope, said she is focusing on delivering supplies for women and children, such as feminine hygiene products, diapers and baby wipes.

“It is meaningful to me to have an opportunity to do something to help, however small, in the midst of this massive humanitarian crisis,” she wrote. She also noted that CBE will be establishing a collection center for aid and supplies and will be sending weekly donations to Ukraine.

“We will be visiting the Ukrainian border crossing points and see for ourselves how agencies on the ground are responding to immediate and ongoing needs of the Ukrainian people,” wrote Rabbi Shaul Robinson, senior rabbi at the Modern Orthodox Lincoln Square Synagogue, who is also joining the mission. “Please G-d I will be back on Tuesday night.”

In an email to his congregation, Steven Exler, senior rabbi of The Hebrew Institute of Riverdale — The Bayit, an “open Orthodox” congregation, wrote: “In connecting with refugees and those helping support them I can send the message that as a Jewish community we are with them, we feel their pain, they are not alone, and we are mobilizing to their aid. And to further open my heart, and bring that back to all of you, by bearing witness and helping on the ground.”

“I’m deeply moved by the invitation to join my rabbinical colleagues on this trip, and grateful to UJA-NY for the opportunity.  I know so many people in my congregation want only to be helpful and supportive to the Ukrainian victims of this nightmare.  In some small way I hope that we can bring them a message of solidarity, support, and hope,” Rabbi Blake told The New York Jewish Week.

The UJA-Federation of New York CEO Eric Goldstein recently visited Poland to review humanitarian efforts on the ground, including by UJA’s two main partners, the American Jewish Joint Distribution Committee and the Jewish Agency, who are planning to rent nearly 1,000 hotel rooms to house refugees in Poland. (UJA-Federation is a funder of 70 Faces Media, the New York Jewish Week’s parent company.)

In a press conference earlier this week, Goldstein urged listeners that the crisis was just beginning and not to let their support dwindle over time.

The UJA-Federation of New York announced $3 million in emergency grants on Feb. 25, and another $2 million on Mar. 9.

With estimates of anywhere between 40,000 to 400,000 Jews, Ukraine was home to one of the largest Jewish populations in Europe. The United Nations Refugee Agency has estimated that over 2 million people fled Ukraine since the war began.