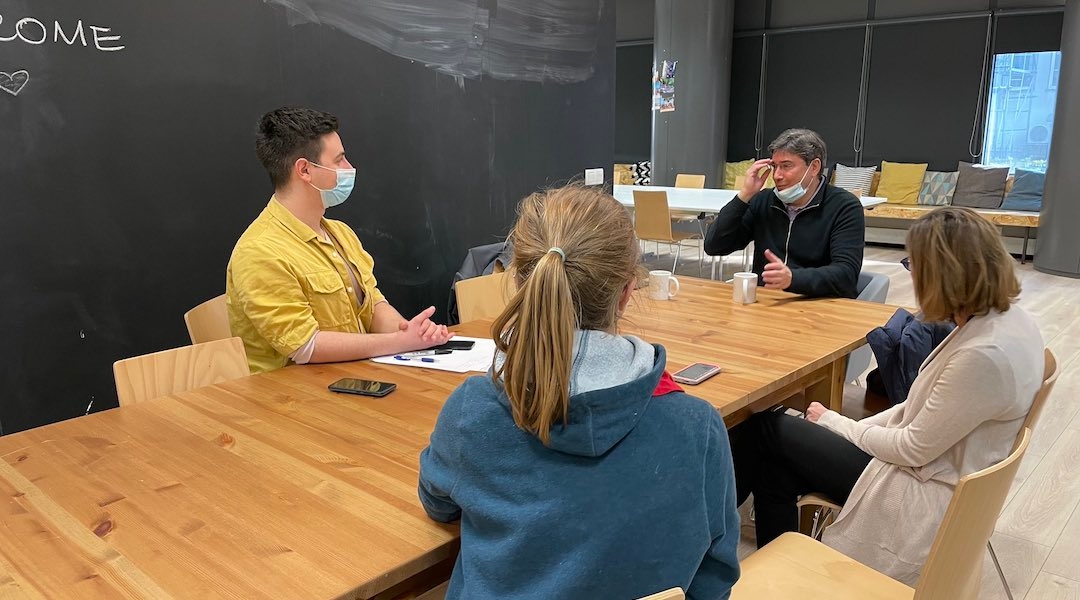 (New York Jewish Week via JTA) — UJA-Federation of New York is expected to approve another $2 million in emergency support for Ukraine, it announced during a Zoom call Tuesday detailing on-the-ground relief and rescue efforts.

The $2 million is on top of another $3 million in emergency funding announced by the philanthropy following Russia’s invasion of Ukraine on Feb. 24.

Mark Levin, CEO of the National Coalition Supporting Eurasian Jewry, urged listeners on the call to contact members of Congress and urge them to approve an aid package to Ukraine worth billions of dollars.

“It is a massive bill that includes emergency food and medical supplies,” Levin said. “The sooner this bill is passed, the sooner this humanitarian assistance can get to those people who need it on both sides of the border.”

UJA CEO Eric Goldstein was in Poland for 36 hours last week reviewing humanitarian efforts — including by UJA’s two main partners, the Jewish Agency and the American Jewish Joint Distribution Committee — and said the war was “a humanitarian crisis unlike anything we’ve seen in our lifetimes.”

“The level of displacement devastation is beyond tragic,” Goldstein said. “The looks on people’s faces as they come across the border, as they come into the houses that are being provided by the Jewish community is really heartbreaking.” (UJA-Federation is a funder of 70 Faces Media, the New York Jewish Week’s parent company.)

He broke into tears when speaking about a hotel near Warsaw’s Chopin airport, where the Jewish Agency had already rented 140 rooms and were planning to rent up to another 700 rooms for displaced Ukrainian Jews.

“Can you imagine if we had a hotel near the Warsaw airport 80 years ago, how different the world would have been?” Goldstein said.

He also spoke about meeting a Holocaust survivor in 2014, when Russia invaded Crimea, who fled her home during World War II and never thought she would have to flee again.

“And now there are people fleeing for a third time,” Goldstein said.

He praised the network of Jewish non-profit organizations for its ability to come together for support in a time of crisis. The UJA will provide grants to 17 organizations on the ground in the region and opened a crisis response mailbox for the effort.

“Crisis unites,” he said. “With all of these organizations coming together, I think you should feel a sense of comfort that the efforts really are being coordinated.”

“We see a lot of women with their children, with their toddlers,” Polonsky said.  “Women who left their dear ones behind.”

He related a story he heard about 400 refugees packed into trains designed to hold 40 people.

“They’re just squeezed there,” Polonsky said.  “I saw this picture of people storming trains in Kharkiv in 1941. Now they’re storming the train in this station in 2022, and it’s almost the same.”

Ilya Bratman, executive director of Hillel at New York’s Baruch College, said that many students at CUNY are Ukrainian and have family members and friends who cannot leave the country.

He spoke about a friend still in Ukraine whose daughter gave birth in the basement of a hospital “under the barrage of Russian rockets and shelling.”

“They couldn’t leave when some of the last buses and trains were leaving for evacuation for the West,” he said. “They’re buckling down inside these bunkers trying to survive and see how long they can last.”

Bratman said a student’s grandparents, both in their nineties, are also hiding out in the bunkers.

“When [my student] is speaking with them, they say ‘Please, can we try to get you out,’” Bratman said. “And they just say, ‘We don’t know anything else. We just know Ukraine.  We just know this place.  We’ve been born and raised here for all of our lives and this is where we will end.’”

At least 40,000 Jews lived in Ukraine before the Russian invasion 13 days ago, making it one of the largest Jewish populations in Europe.

Close to two million refugees have already fled the country; the European Union is now estimating that refugee numbers could top five million, making it the largest refugee crisis in Europe since World War II.

The Israeli government said it is preparing to take up to 10,000 refugees from Ukraine in the coming weeks.

Goldstein said that this crisis is in “the early innings” and urged people not to become numbed to the headlines and let support dwindle.

“We need to continue to be there for the community,” he said.