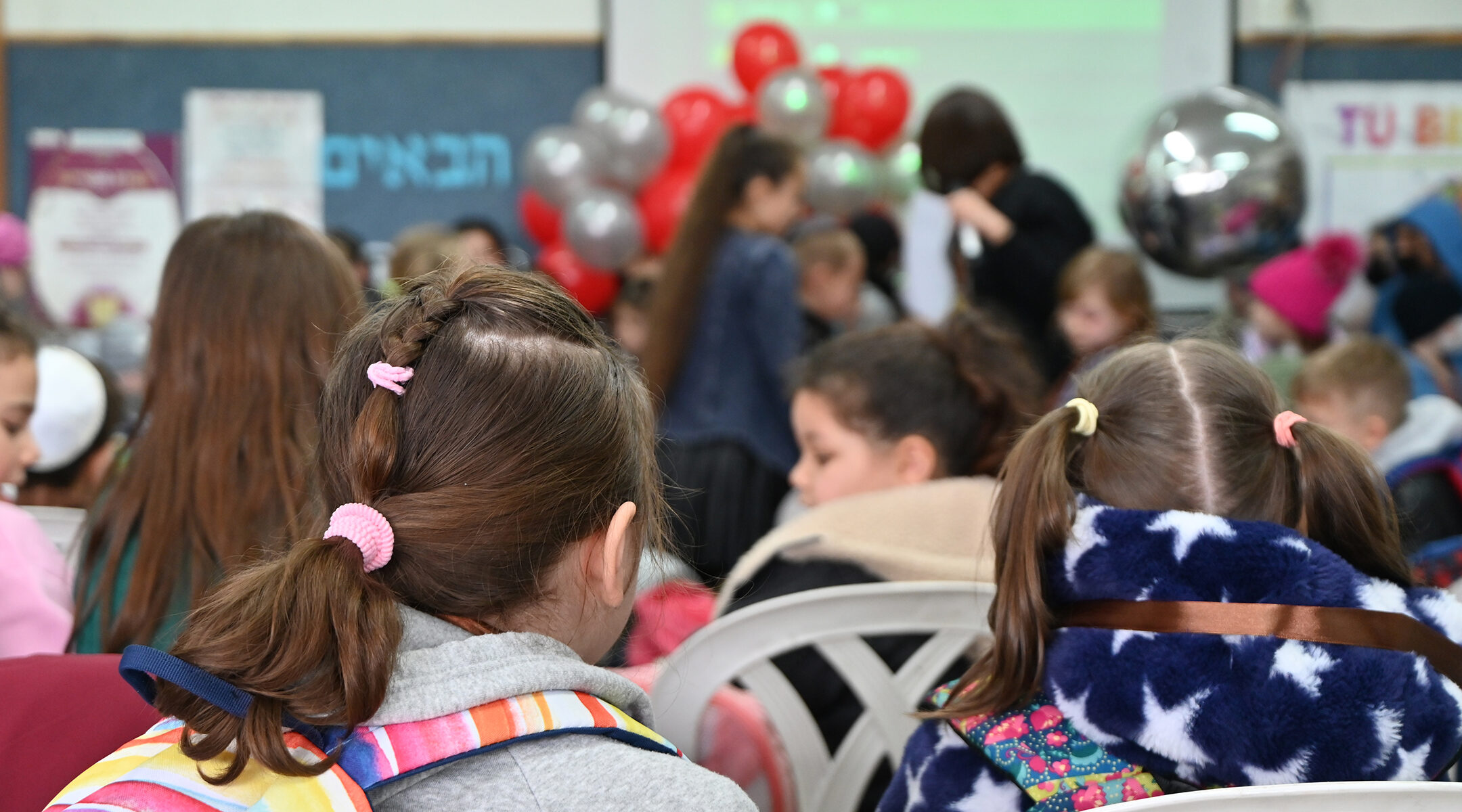 “Everyone spoke Hebrew and I didn’t understand anything,” she recalled, weeks after fleeing her native Ukraine for the safety — but unfamiliarity — of Israel.

Then her mother heard about a school focused on new immigrants where 90% of students speak Russian. She quickly enrolled Veronica in the Shuvu Renanim school in Nof Hagalil, a city of 41,000 in the Galilee where an estimated 60% of families speak Russian at home.

More than 600 Ukrainians have come to Nof Hagalil since Russia invaded Ukraine on Feb. 24, setting off a massive migration of Ukrainians to whatever country can give them safety. About 4,000 Jewish refugees have already arrived in Israel, with potentially tens of thousands more expected.

The Ukrainian children who have landed in Nof Hagalil and at Shuvu Renanim were living safe, stable lives just over a month ago. Now they have wound up in a foreign land, usually without their fathers because of Ukraine’s ban on letting men younger than 60 leave the country, and often after experiencing trauma during the war’s early days and their flights from Ukraine.

“It’s horrifying to see a student shuddering in fear whenever a door is slammed too hard or an ambulance wails by,” said Sara Neder, who has been Shuvu Renanim’s principal for 12 years.

Tetiana Denysenko, 36, stayed in Kyiv for as long as possible together with her 10-year-old son, Sasha, and his father in Kyiv.

“But it became impossible. The constant thud of bombs gave Sasha a trauma, and we saw our happy boy changing before our eyes, one sleepless night at a time,” she said. So they left without Sasha’s father, who expects to be conscripted into the military shortly. 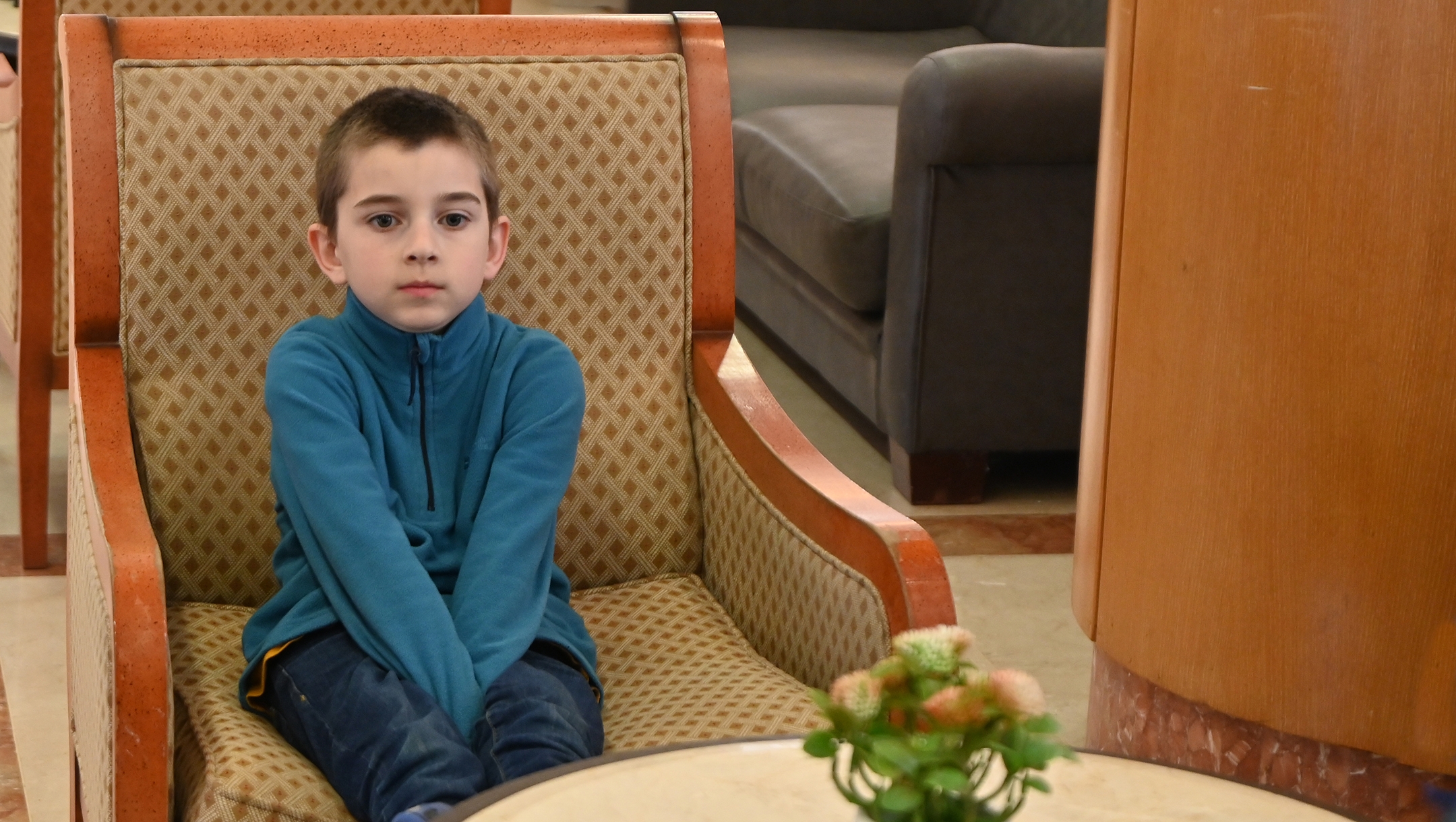 Sasha Denysenko, a 9-year-old war refugee from Ukraine, waits for his mother on the lobby of the Plaza hotel in Nof Hagalil, Israel, March 23, 2022. (Cnaan Liphshiz)

Now she and Sasha are staying in Nof Hagalil’s posh Plaza Hotel, where the city is temporarily housing new immigrants for up to a month as they look for apartments to rent. Buses bring Sasha and other children back to the hotel from the Shuvu school each day, part of a sweeping effort to make the city welcoming for the new arrivals.

At school, the staff talk and devote extra attention to the new arrivals to “try to make them feel as welcome and safe as possible,” said Neder. The school has not offered dedicated trauma counseling, but the newcomers are “doing better than when they first arrived,” she added.

Shuvu’s founder was Avraham Yaakov Pam, a Litvak rabbi from Brooklyn who was born in the former Soviet Union and who had lobbied for providing religious education to as many Jewish children as possible from the wave of mass immigration to Israel from the former Soviet Union in the early 1990s. Having been raised under communism, those children — and their parents — had not had access to Jewish education.

In recent years, as immigration from Russian-speaking countries waned, the schools had shifted to enrolling children from other countries as well as the children of immigrants from the former Soviet Union. Now, the war in Ukraine is renewing the network’s original mission.

Shuvu schools are able to choose whom they admit and what they teach, because the schools occupy a category designed for haredi Orthodox schools that allows such institutions to receive state funding while departing from the standard Israeli curriculum. 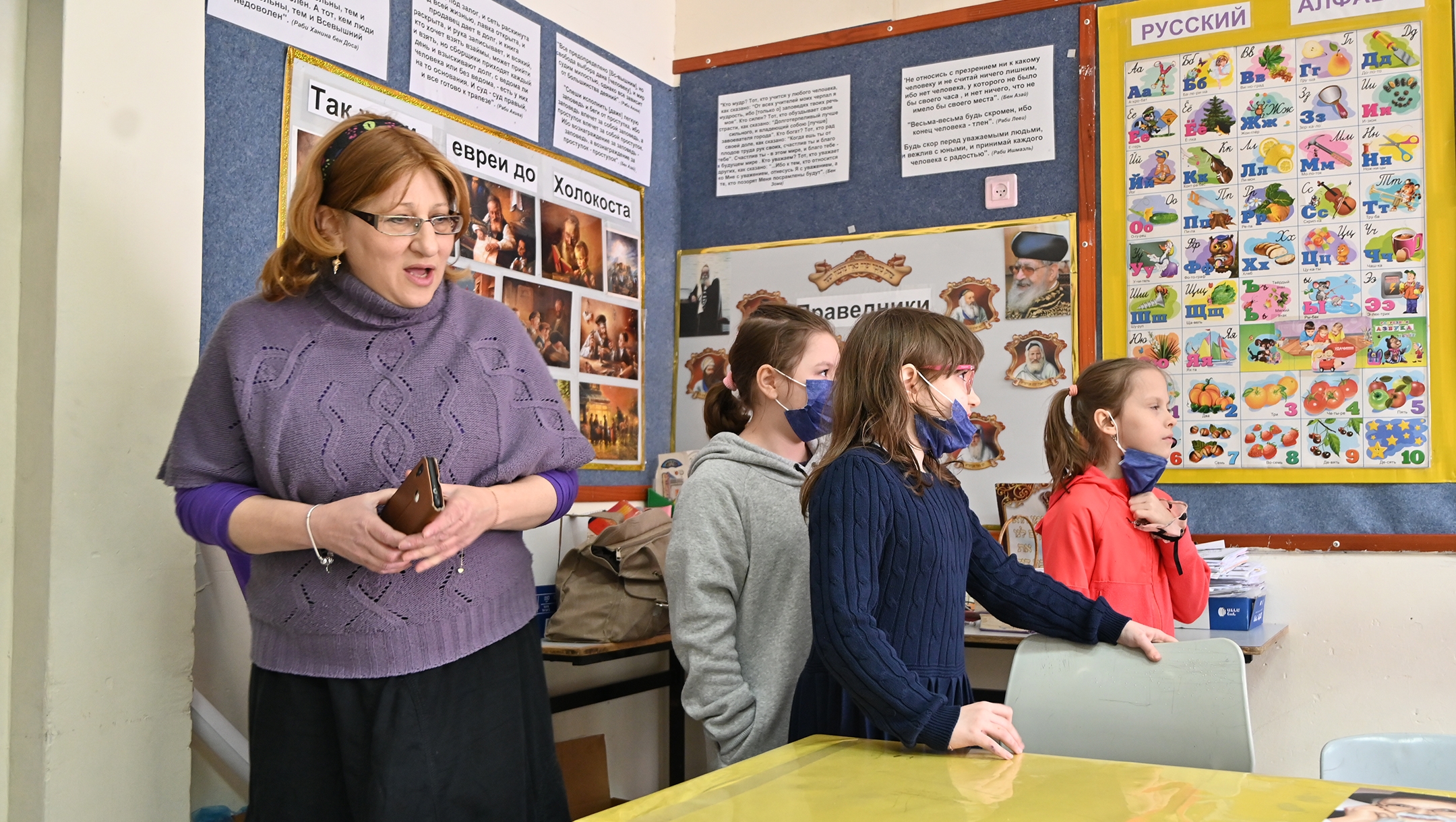 Formally, Shuvu schools are classified as haredi by the Israeli education ministry, and they have some things in common with yeshivas attended by Orthodox Jews. Female staff members, if married, wear wigs, as is the convention in haredi Jewish communities. Among the students, the girls wear long skirts, and all the boys are supposed to cover their heads with kippahs. The network also accepts only children whose mothers were Jewish, in keeping with Orthodox Jewish law.

But the schools are different from traditional yeshivas in significant ways. “They are not haredi schools because there are boys and girls in the same classrooms and we have students here whose parents don’t keep Shabbat,” Buterman said.

“Look, we don’t force anything on anyone here,” Neder said. “There’s a dress code, sure, there are extra lessons on Judaism, but at the end of the day we accept and love all our students the way they are.”

Some of the parents of the children attending Shuvu attended synagogues — mainly affiliated with the Hasidic Chabad-Lubavitch movement — prior to their immigration to Israel. Others, however, send their children to Shuvu for reasons unrelated to the school’s focus on Orthodox Judaism.

For a tuition of about $62 a month, parents at Shuvu get a school day two hours longer than state schools’ in classes 30% smaller than at public schools, as well as a warm meal and busing from their homes.

Many secular parents are convinced to send their kids to Shuvu because of these benefits, coupled with how hospitable the schools are to Russian speakers.

“Frankly we don’t care too much about all the religious stuff, we don’t keep Shabbat, my husband doesn’t wear a kippah,” said one mother, a woman who immigrated to Israel from Ukraine in 2010 and asked to be quoted anonymously because of her children’s preferences. “But this school is just excellent, nothing comes close.”

Shuvu Renanim does have some serious credentials in the scholastic excellence department.

Last week the Nof Hagalil school won a national math and computers contest for the fourth straight year — a record that Neder, who does not speak Russian, attributes to “the work and study ethics of the homes of most of our students,” she said. Another Shuvu school from Petah Tikva also made it to the top 10 list.

The Nof Hagalil school’s 16 refugees watched with interest as the other students celebrated this feat at a school event featuring balloons, loud music and medals presented to the winning team by a beaming Neder, who came to the school on her day off for the party.

The Shuvu school is only part of the attraction of Nof Hagalil for Ukrainian refugees. 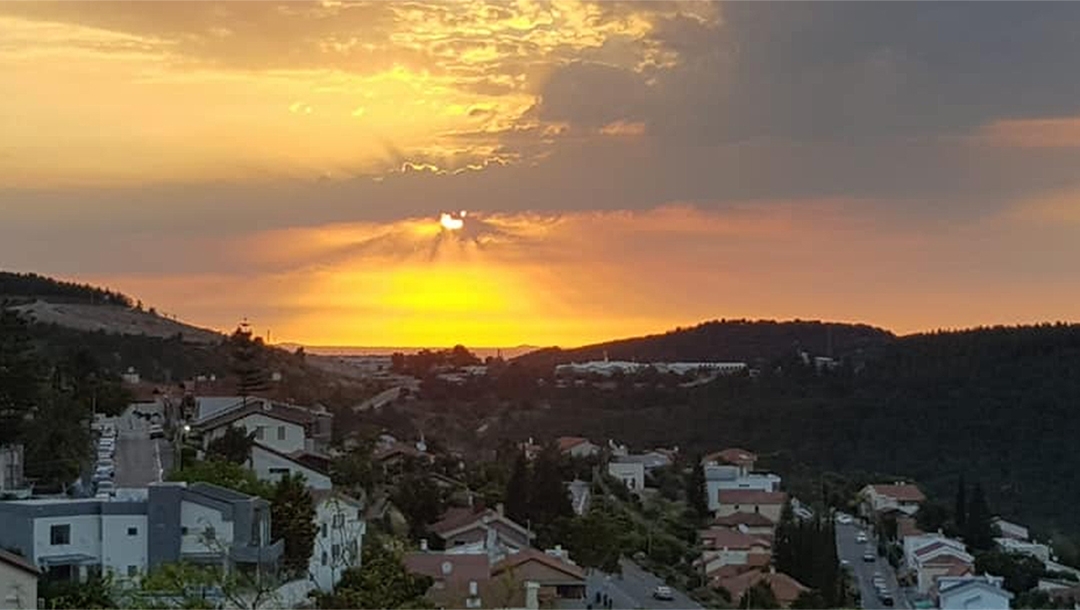 The sun sets on Nof Hagalil, Israel, May 20, 2020. (Courtesy of the municipality of Nof Hagalil)

The Plaza hotel and city center offer a stunning view of Nazareth, the predominantly Arab neighbor city, and the lush forests of the Galilee, which have been shrouded in mist from unseasonably late rains this month. (Ira Kapustenyenko, a 9-year-old from Kyiv, said the view is “the best thing that’s happened” to her since leaving Ukraine, where her twin sister Katja said about the early days of the war, “We were so afraid we thought we’d die from fear.”)

The newcomers are also welcome free of charge at the city’s only heated pool, the country club, theater halls and other attractions for the whole year following their arrival, per a decision by Nof Hagalil’s mayor, Ronen Plot, himself a Russian speaker who was born in Moldova.

These perks, which are above and beyond what other cities are offering immigrants from Ukraine or anywhere else, are “about Zionism,” said a city spokesperson, Orna Yosef Buhbut. She added, ”This is a Jewish city. We will not ignore the plight of Jewish people in order to balance the budget.”

The city’s extreme hospitality has become a badge of pride for its residents. They have donated many tons of clothes and toys for the refugees, who pick them up at a makeshift handout point set up by the municipality in an underground parking lot. 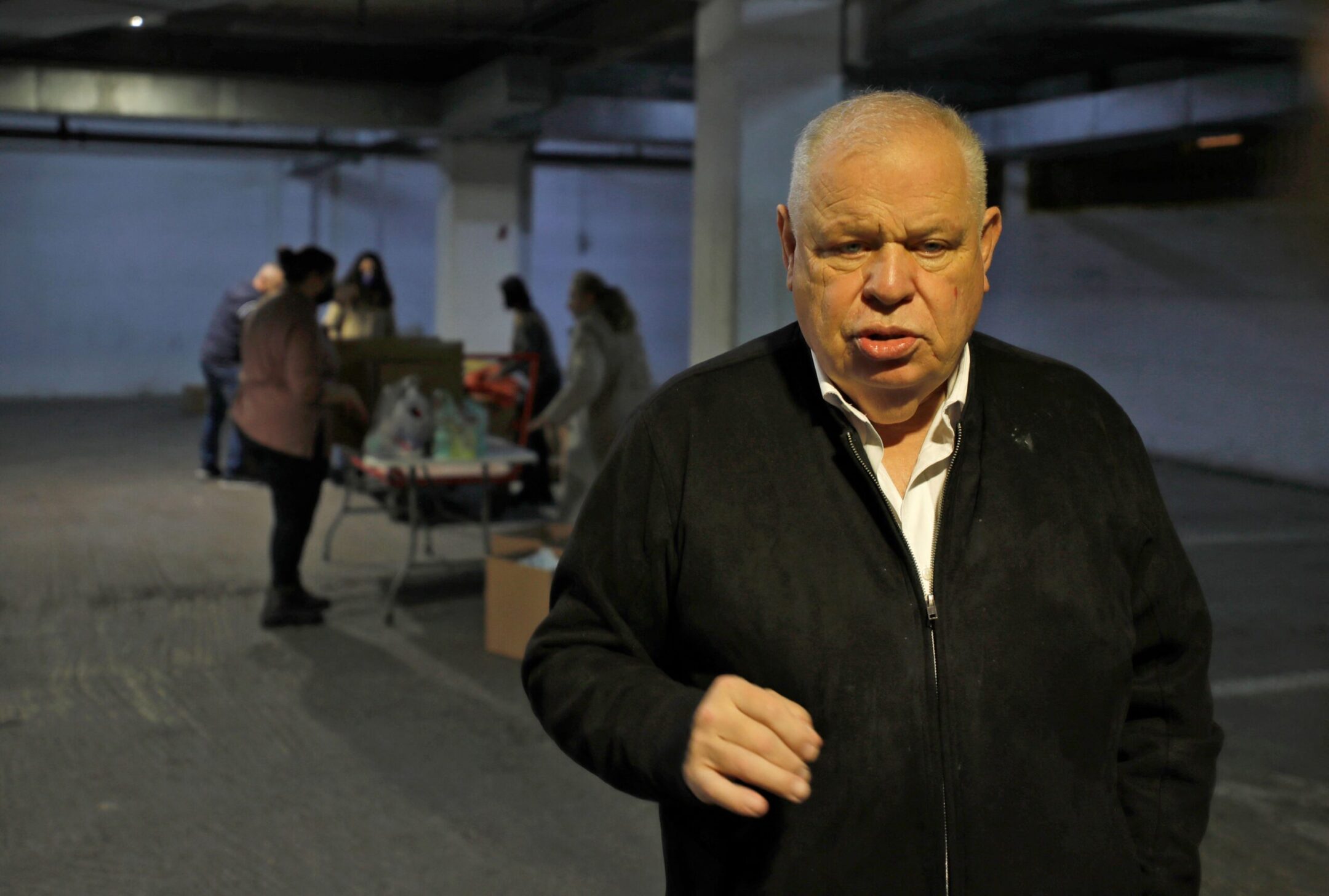 “Let the record show please that when the crucial hour came for our brethren, it was Nof Hagalil, not the cash-padded high-tech crowd of Herzliya, that punched above its weight,” said resident and falafel stand owner Sammy Buari, whose parents came from Libya.

But the effort is taxing for the city, whose residents earn 20% less, on average, than the average Israeli. The absorption of about 15% of the Jewish refugees who have come so far to Israel is putting a dent in Nof Hagalil’s budget, Buhbut said.

“Their circumstances are not like the olim who came before,” she said, using the Hebrew word for immigrants who came under Israel’s Law of Return for Jews and their relatives. “They came with the clothes on their backs, with nothing, due to their hasty flight. Some didn’t have enough underwear to change. We have to equip them with everything.”

“It’s a sound investment,” she said. “Many of the people who are coming here, albeit under tragic circumstances and with nothing but the clothes on their backs, are academic professionals. They are survivors, they are entrepreneurial. Give them five years and they will integrate into the fabric of the health system, the high-tech scene, the local businesses.”

But whether the families will stay in Nof Hagalil for the long term remains a question. There are precious few attractions to the city beyond the view. A far cry from the bustling urban life of Kyiv and Odessa, Nof Hagalil is a sleepy small city whose first train connection to Haifa isn’t planned to materialize for another four years. Its main claim to fame is that in 2019 it changed its name from Natzrat Ilit, to avoid confusion with the name of the birthplace of Jesus.

“Mostly after school we sleep,” said Jan Yermochin, a 12-year-old Jewish boy from Kyiv who arrived in Nof Hagalil earlier this month.

Like dozens of the newcomers from Ukraine, Yermochin, who hopes to one day be a banker, attended a Jewish school there — the Chabad-affiliated Simcha elementary in his case. Others went to public schools. Some grew up with some knowledge of Judaism, but others come from mixed marriages where faith never even came up. Very few speak Hebrew.

Lena Maidanova, the 33-year-old mother of two girls, one of whom is enrolled in Shuvu, thinks she will stay with them and her husband when he’s allowed to leave Ukraine.

“This place looks nice, rent isn’t too high,” she said of Nof Hagalil. “Ultimately Israel is less comfortable than Ukraine for us parents, but for the children, I think growing up in Israel is more advantageous.”

Others who have landed in Nof Hagalil say they aren’t so sure. Katja and Ira Kapustenyenko said they would happily return to Kyiv, where they were being raised by their grandmother before the war, if they could.

“I don’t think I’ll ever be happy here. I won’t have friends here. I want to go back,” Katja said.

For many of Nof Hagalil’s newest arrivals, the question of where they will ultimately live feels hard to consider right now, with the war still raging back in Ukraine.

“I have no idea what happens next,” Tetiana Denysenko said. “With my husband, with Ukraine, with our home there. Our whole lives were turned upside down. For now the only horizon we’re seeing is the reunion of our family.”