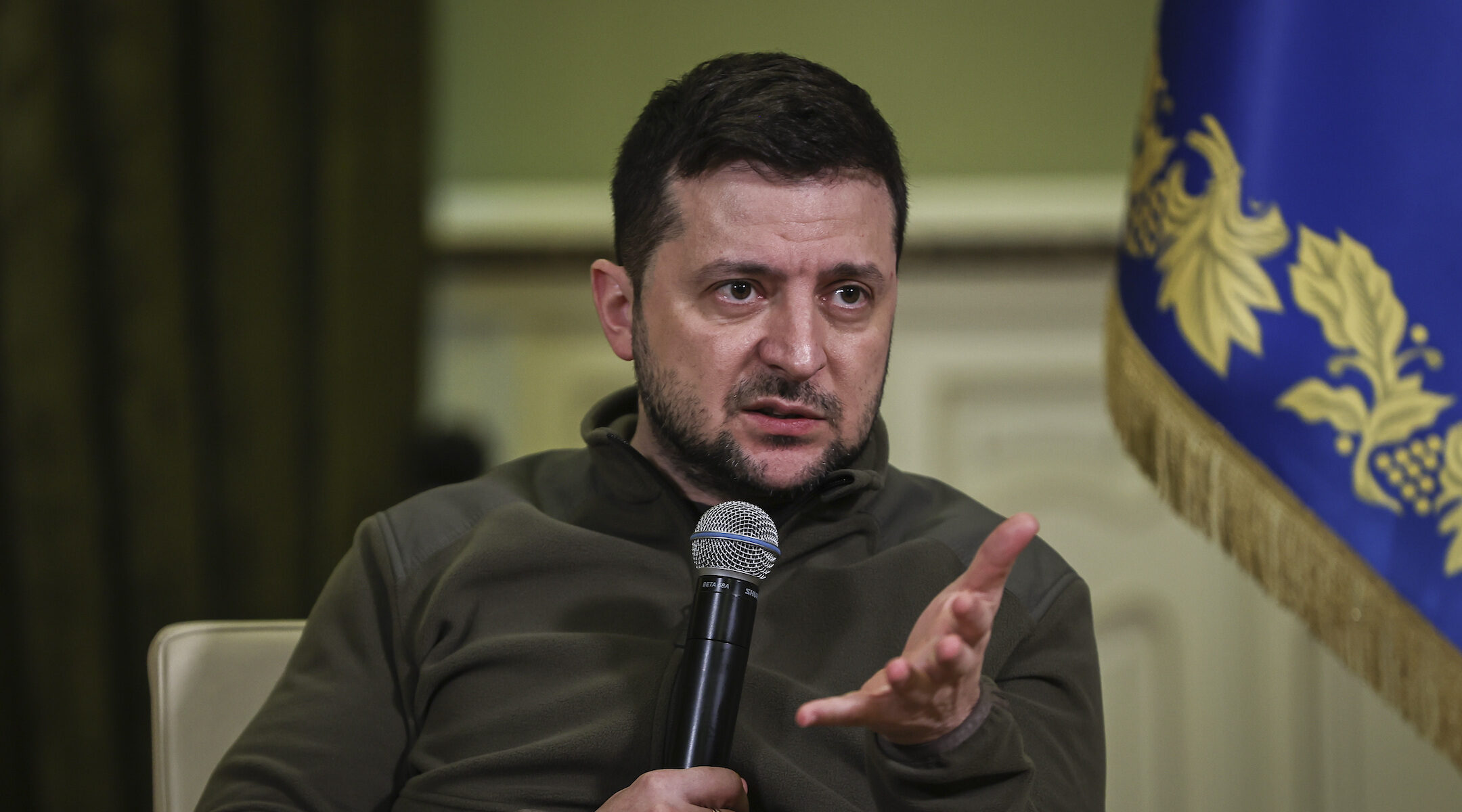 (JTA) — Speaking at a press conference Saturday, Ukrainian President Volodymyr Zelensky said Jerusalem could serve as the location for potential negotiations between Ukraine and Russia.

“These are not places where we can come to any understandings on ending the war — I’m not talking about technical meetings but meetings between leaders,” Zelensky said of Ukraine, Russia and Belarus, according to The Times of Israel. “I believe Israel can be such a place, especially Jerusalem. I think so, and I said this to [Naftali] Bennett.”

Zelensky’s comments came just on week after Israeli Prime Minister Naftali Bennett flew to Moscow to meet with Russian President Vladimir Putin and spoke with Zelensky several times by phone in an attempt to bring about an end to the conflict.

In the early days of Russia’s attack on Ukraine, Zelensky asked Bennett to mediate negotiations because of Israel’s uniquely close ties to both Ukraine and Russia. Bennett, who declined to follow other Western countries in sending weaponry to aid Ukraine, brought the request to Putin, who initially denied it.

Citing an unnamed Ukrainian official, Haaretz reported Friday that Bennett had urged Ukraine to accept Russian terms for an end to the conflict and was pursuing a negotiator role to avoid sending military aid to Ukraine, something Israeli and Ukrainian sources have denied in other reports.

Israel has been less forthright in condemning Russia’s invasion of Ukraine than many other Western states as it has tried to maintain its relationships with both countries and to potentially facilitate peace talks. While Israeli Foreign Minister Yair Lapid has condemned Russia directly multiple times, Bennett has been more reserved in his criticism.

A United States official urged Israel to join other Western nations in enacting sanctions on Russia in an interview with Israel’s Channel 12 Friday.

“We squeeze the oligarchs around him, we squeeze its economy. So in that context we’re asking as many countries as we can to join us. We’re asking that of Israel as well,” said Victoria Nuland, a U.S. State Department official. “Among other things, you don’t want to become the last haven for dirty money that’s fueling Putin’s wars.”

Nuland was referencing the fact that some Russian oligarchs with ties to Putin have Israeli passports. Roman Abramovich, who has been hit with sanctions in the United Kingdom, landed in Israel on Sunday.

Israeli Foreign Minister Yair Lapid said Monday during a visit to Slovakia: “Israel will not be a route to bypass sanctions imposed on Russia by the United States and other Western countries.”