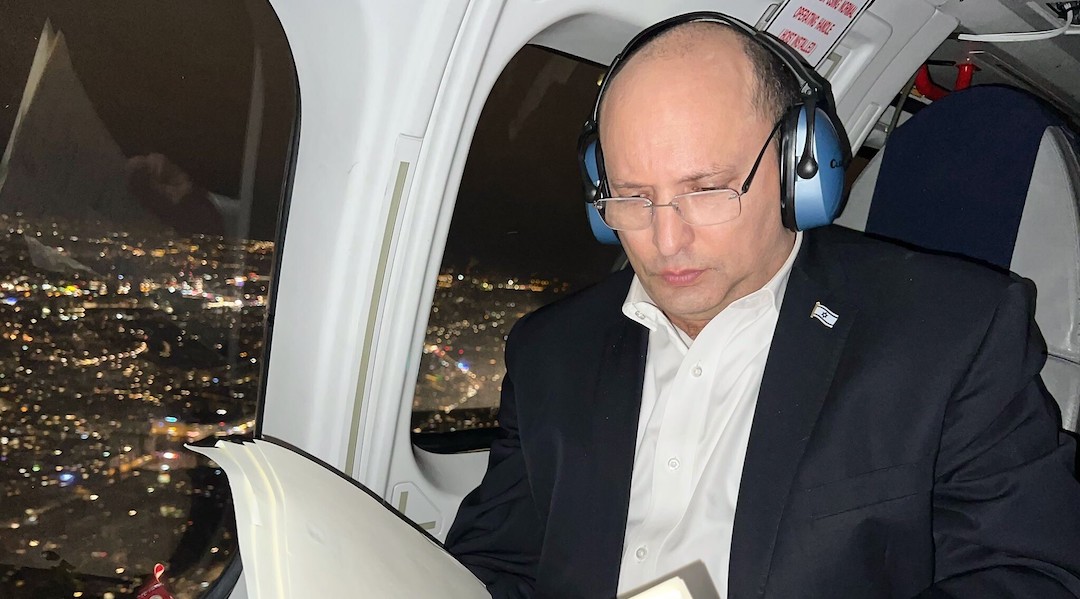 (JTA) — Israeli Prime Minister Naftali Bennett had a marathon day of negotiations that cemented Israel’s place at the forefront of international talks on the war in Ukraine, starting with an unexpected meeting in Moscow with Russian President Vladimir Putin.

Bennett spoke with Putin for three hours on Saturday, according to his office, then flew to Berlin to speak with German Chancellor Olaf Scholz. Bennett later spoke with Ukrainian President Volodymyr Zelensky and French President Emmanuel Macron over the phone.

Among other issues, Bennett and Putin discussed the state of the Jewish community in Ukraine, several reports claimed.

In the early days of the Russian attacks that started Feb. 24, Zelensky asked Bennett to mediate negotiations because of Israel’s uniquely close ties to both Ukraine and Russia. Bennett, who declined to follow Western countries in sending weaponry to aid Ukraine, brought the request to Putin, who initially denied it, at least partly because a first round of negotiations had already been set up in Belarus.

Israel has not been as outspoken as Western powers have in castigating Russia for its invasion because of Putin’s stronghold position in Syria, one of Israel’s neighbors and fiercest enemies. Israel is believed to conduct strikes regularly in Syria, likely with some coordination with Russia.

Zelensky, who is Jewish, said Thursday that he does not feel Bennett “has wrapped himself in the Ukrainian flag” throughout the first weeks of the war. After declining to co-sign a United Nations Security Council resolution condemning Russia, Israel signed onto a similar General Assembly resolution days later.

In addition to the war in Ukraine, Bennett also spoke with Putin and Scholz on ongoing talks to revive the Iran nuclear deal. Some officials believe the United States could reenter the deal, which former President Donald Trump pulled out of, as early as next week.

Israel opposes the deal, which it says opens the path for its avowed enemy Iran to obtaining nuclear weapons. Russia and the United States are pushing for the deal.