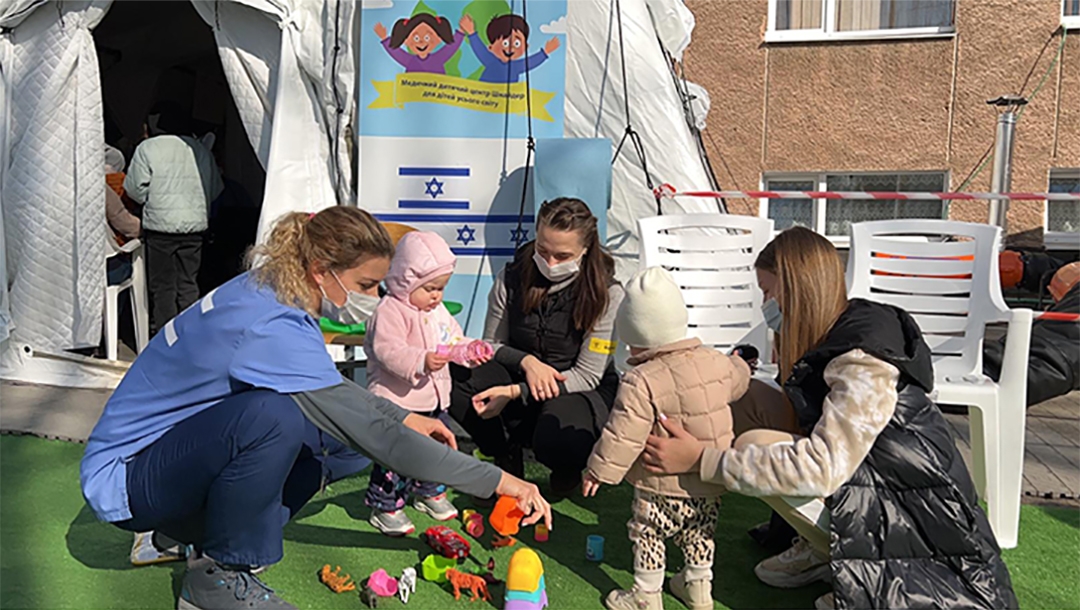 (JTA) — Israeli physicians and Jewish groups are assisting thousands of non-Jews across Ukraine deal with the effects of the Russian invasion into that country.

Near Lviv in Ukraine’s west, a field hospital set up this week by the Israeli government with physicians and nurses from the Schneider Children’s Medical Center near Tel Aviv has treated at least 160 patients, most of them children, since it opened Tuesday, according to the Jewish News website on Ukrainian Jewry.

There are 66 beds and dozens of staff and volunteers working alongside the medical staff from the Schneider Center at Israel’s Kohav Meir hospital — a name that means “shining star” in Hebrew but is also a reference to Golda Meir, an former Israeli prime minister who was born in Kyiv and is seen as an inspiration by many Ukrainians.

Israel and the United States are among a handful of countries that have set up field hospitals in Ukraine. The Israeli one is set up to treat about 150 patients daily, according to Israel Hayom.

Most of the patients have issues unrelated to the fighting but have lost access to medical treatment because of it.

The hospital’s first patient was a 12-year-old girl with a heart problem who fled with her mother from Mariupol, a city devastated by Russian bombing. She arrived with a rapid pulse and chest pains and her condition was stabilized at the field hospital, which operates outside of a school and partly under a sturdy white tent opposite a church in a town near Lviv, Yedioth Acharonoth reported Wednesday.

Another, a 2-year-old girl named Alisa, came in with a chronic skin condition that had worsened following weeks in which it was not treated. The physicians at the field hospital consulted experts at the Schneider Center in Israel, using telemedicine video equipment, to arrive at a diagnosis and treatment. The inspection was interrupted by sirens that sent the patients and medical staff running toward the nearest shelter, the Israeli paper reported.

In Dnipro, a city in eastern Ukraine with many Jews, the Jewish Medical Center clinic, which was set up with the primary goal of treating members of that community, has shifted its focus, dispatching its staff of about 10 medical professionals across centers for internally displaced persons in Ukraine, the Jewish community of Dnipro wrote on its website Thursday.

The Russian invasion, which began on Feb. 24, has resulted in thousands of casualties and a wave of refugees — about 3.5 million Ukrainians are estimated to have moved into the European Union alone — and many more internally displaced.

In Uman, a city in central Ukraine, local Jews set up an aid center near the grave of Rabbi Nachman, an 18th-century luminary who inspired the Breslov Hasidic movement. Several hundred Jews, most of them Israeli, had moved to Uman in recent years amid an annual pilgrimage of about 30,000 Jews from all over the world to the gravesite.

The center offers clothing and other assistance as well free tea and coffee and shelter to internally-displaced persons, the Jewish News of Ukraine website also reported.

In Bila Tservka, a small city near Kyiv, the small Jewish community pooled their resources to buy and donate diapers, wet wipes and hygiene products for mothers and children, as well as blankets and detergent, according to the Jewish News of Ukraine.

The Jewish community of Zaporizhzhia near Dnipro is also collecting products and medicines from its members for the general population.

Before the invasion, Ukraine, which has a population of about 40 million people, had about 43,000 people who self-identified as Jews, according to a 2020 demographic study of European Jewry, and up to 200,000 people who are eligible to immigrate to Israel under its law of return for Jews and their relatives. At least 4,000 of that group have immigrated to Israel over the past month.