Babyn Yar was his backyard. Now this 95-year-old Holocaust survivor has escaped Ukraine after a harrowing ordeal. 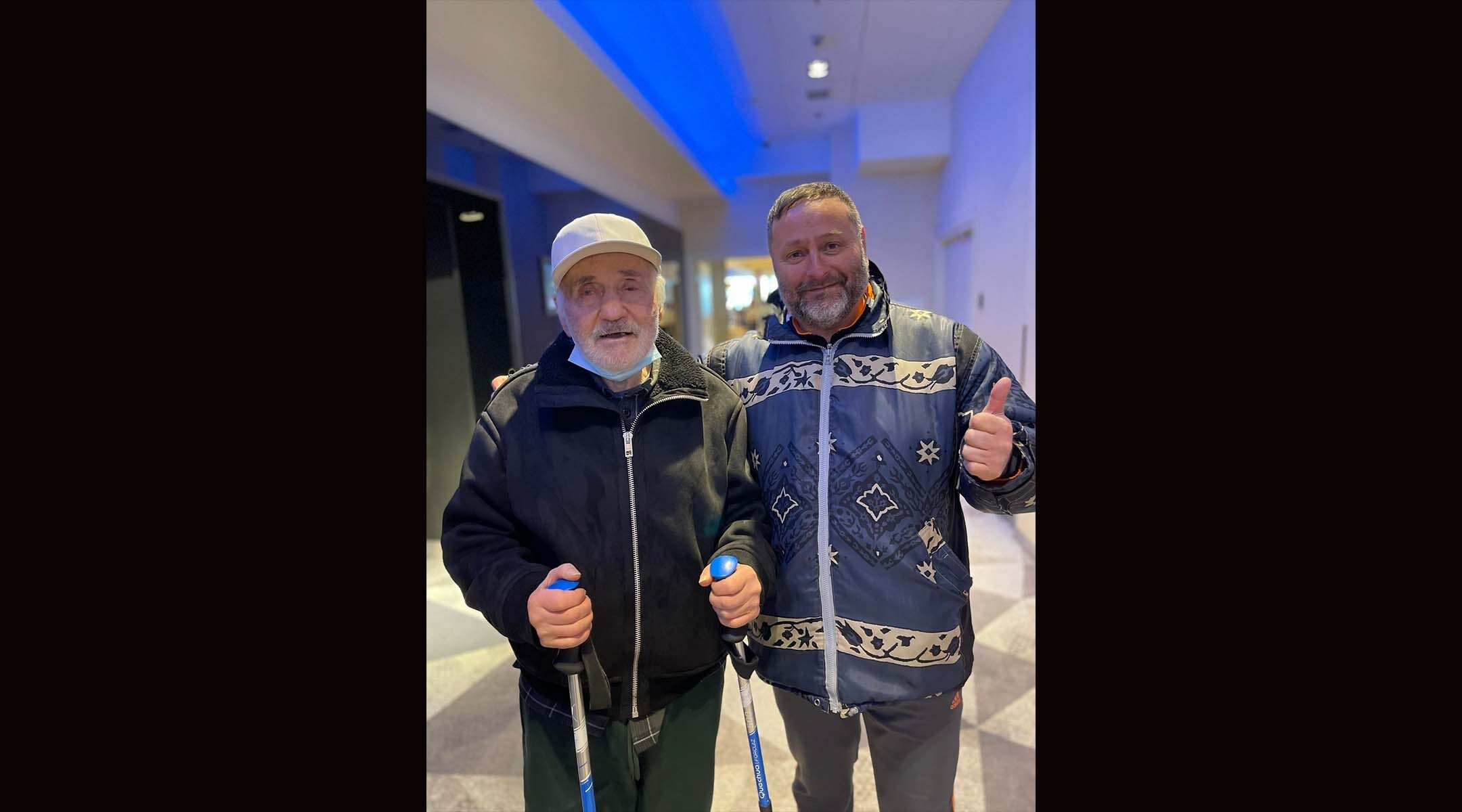 Evgeny Pavlovskiy and his son, Mykhailo Pavlovskiy, reunited in Warsaw after he struggled to leave Ukraine. (Courtesy From the Depths Foundation)
Advertisement

(JTA) — Before this month, the last time Evgeny Pavlovskiy left the Kyiv area was during World War II, when his Jewish family hid from the Nazis in Russia’s Ural Mountains.

At 95 and suffering from several serious ailments, he was content living alone just two houses away from the entrance to Babyn Yar, where the Nazis killed and buried more than 33,000 Jews on two days in 1941. When his son moved to Israel earlier this year, he decided to stay in his native land.

And when rumors of war began to swirl earlier this year, he was unmoved, like so many other Ukrainians who could not believe that Russian President Vladimir Putin would attack their country.

“My father did not want to leave Ukraine no matter how hard I pressed,” said Mykhailo Pavlovskiy, who also goes by Moshe. “By the time I finally persuaded him, no one was around to help.”

Evgeny Pavlovskiy ultimately made three solo attempts to flee the Russian shelling and artillery. His journey to Poland, a drive that would have normally taken eight hours, lasted three days.

Pavlovskiy’s great escape represents the wartime resilience of both Jews and Ukrainians, two groups he identifies with full-heartedly. It also makes him likely to be the oldest refugee to have fled the war in Ukraine on his own, rather than alongside younger family or friends.

“I would like my story to help people and to inspire them,” Pavlovskiy said. “And I have another message, I want Russians to stop killing Ukrainians.” he pleaded. “They started World World III without realizing it, and now they are destroying the homes and lives of peaceful people. They should stop!”

After war erupted in February, Mykhailo persuaded his dad that Russian saboteurs might invade his home and murder him. 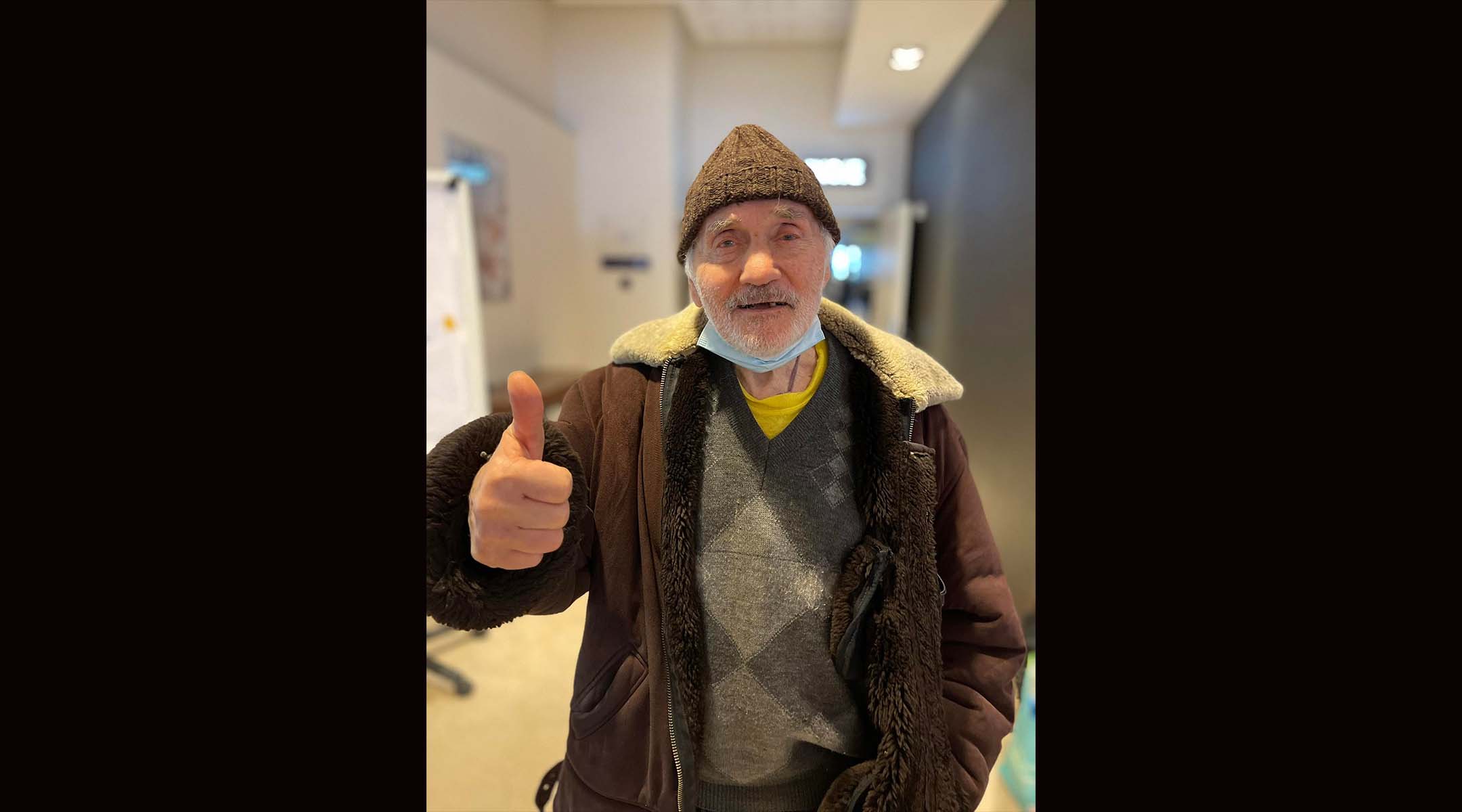 Pavlovskiy loved his life in Ukraine despite his family’s history of trauma in the country. (Courtesy From the Depths Foundation)

So Pavlovskiy made an 11-hour journey by train from Kiev to Lviv, a trip that normally takes roughly six and a half hours.

Evacuation train cars from Kiev intended for six people are typically packed with twice as many passengers, who wait for hours and sometimes days with the hopes of boarding. They only have the clothes on their backs and personal items they can stuff in a small backpack or purse.

“The most difficult and heroic thing, for which I thank him every day, is that my father got on that evacuation train,“ said Mykhailo. “Before the trip, my father tried not to drink or eat anything, because there was no toilet. He sat for 11 hours without moving.”

Then things got worse. Upon trying to leave Lviv for Poland, Pavlovskiy had to stand in a line for seven hours in the hopes of finding safe transport.

“He had a serious mental breakdown, ” said Mykhailo. “He felt that everyone had abandoned him; he was crying.”

The younger Pavlovskiy stayed in constant contact with his father as he tried to leave the country. “Really his only support was my voice on the cell phone,” Mykhailo said. “He didn’t meet anyone he knew during his entire journey.”

“I am now going through the process of repatriation [or making aliyah]. This is only the second month for me, so I didn’t have a passport with which I could travel,” Mykhailo explained. “By the time I received permission to leave Israel, 15 days had passed since the start of the war. As soon as I had a passport, I immediately bought a ticket and flew to Poland to meet my dad.”

Meanwhile, strangers in Kyiv took pity on the ancient refugee and found him a hostel. He tried again to leave from Lviv to Poland via bus, but logistical obstacles and concerns about Russian shelling thwarted his journey.

Mykhailo was then able to reach friends who helped his father get on a bus to Poland that was operated by Caritas, a Catholic charity. When he crossed the border, he became one of nearly 3 million Ukrainians to leave their country since Feb. 24.

It took Pavlovskiy six hours to make it to Tomaszow Lubelski, a Polish border town. He stayed there for a day and was sent to Lublin, and then on to Warsaw to reunite with his son.

The father and son are among thousands of Jewish Ukrainian refugees in that city, where they are receiving support from multiple Jewish charities, including the From the Depths Foundation, a group focused on memorializing the Holocaust that says it has spent $25,000 on food, clothing and other supplies for refugees in Poland. Staying in hotel rooms paid for by Israel’s Jewish Agency, the Pavlovskiys plan to travel to Israel together in the next few days.

The move is one that many Ukrainian Jews have made in recent decades, but one that Pavlovskiy never considered despite the trauma he endured at home, first during the Holocaust and then during the Soviet era, when Jews were the target of state-sponsored discrimination that limited his educational and work opportunities.

While Pavlovskiy’s immediate family survived the Holocaust by fleeing to the Urals — “They didn’t know what a Jew was there,” he said — relatives and friends left behind were murdered.

“My aunt was betrayed by her husband, he personally drove her — she was disabled and could not walk — and handed over to the German authorities,” he said. “They killed her.”

Those traumas were in the past for Pavlovskiy before the outbreak of the war, before Russia dropped bombs across his country, including adjacent to Babyn Yar March 1 in a shelling that has come to be a symbol of Russian aggression.

“My father received a decent pension and help from the Hesed,” Mykhailo explained, referring to a Jewish charity. “A woman came to my father’s house four times a week to cook and clean. He loved his life in Ukraine and already misses it a lot.”

As for Mikhailo, a licensed psychotherapist, he is happy to be in Israel with his wife and children,  and hopes he can help refugees process the trauma they are going through. But he also wishes to defend his native country. “I want to go back and fight,” he said. “But my family won’t let me.”