From tefillin to troop training: Meet the Orthodox former IDF soldier on the front lines in Ukraine 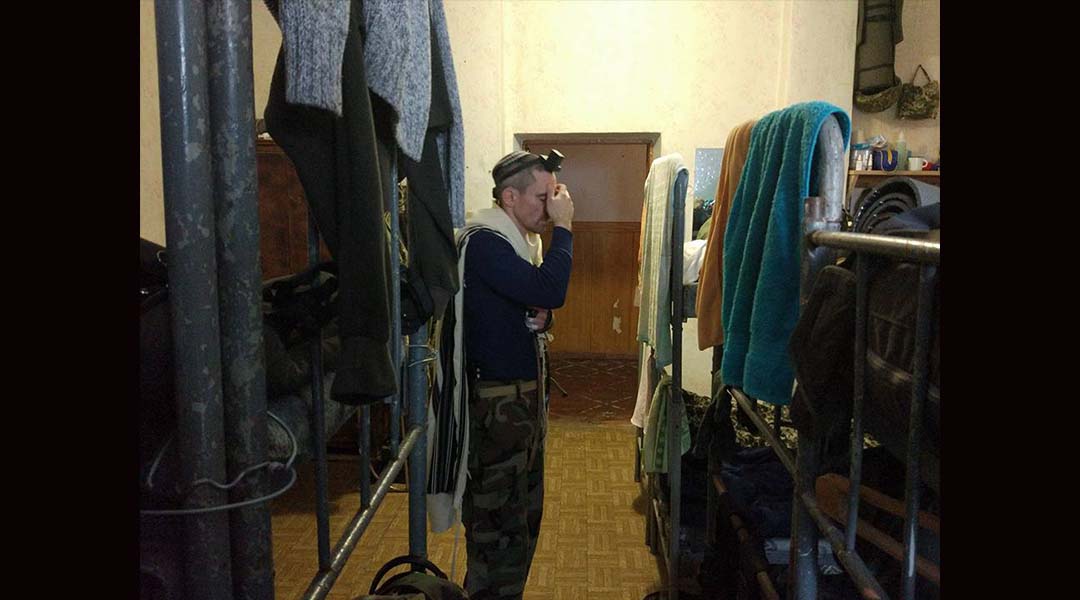 Tzvi Arieli, seen here praying in a Ukrainian army barracks in 2017, is a Ukrainian immigrant from Israel who is fighting in its army. (Courtesy Arieli)
Advertisement

(JTA) — As an Orthodox Jewish man, each morning Tzvi Arieli wraps his arm and forehead with tefillin, the black leather straps that connect two small boxes filled with verses from the Torah.

“If I need to shoot some Russians, timing is really important. I might not be able to focus on tefillin and war in the same split second,” said Arieli, a former Israeli Defense Forces soldier who is fighting alongside the Ukrainian army as his adopted country defends itself against Russia’s invasion.

The 42-year-old has spent the past weeks preparing for battle while lying low at his in-laws’ home about 70 kilometers south of the Ukrainian capital, Kyiv, in a town he preferred not to name for security reasons. Now, nearly a month into the war, he said he was on his way to ambush enemy troops as a member of a paratrooper unit.

Russian President Vladimir Putin launched air and land strikes against its neighbor on Feb. 24 after Ukraine rejected his territorial demands. These included the recognition of Crimea as part of Russia and the independence of two Russian-backed separatist regions in eastern Ukraine.

Arieli, who first worked for the Ukrainian military in 2014 to fend off the separatists, is a rarity as an Israeli fighting directly against Russian troops. Yet he reflects the complex set of ties Jews from the former Soviet Union have to the region, and to Israel.

“I see myself as Ukrainian,” said Arieli, who was born in Latvia. “I am also Israeli but I am not very happy with Israel at the moment,” he added, a sentiment he links to both personal and political concerns.

Arieli emigrated to Israel after high school, where he attended college and served with an IDF unit that battled Palestinian militants in the West Bank during the Second Intifada. He also spent two years studying in the United States, at the Rabbinical College of America in Morristown, New Jersey.

He then headed the Zionist youth organization Bnei Akiva in Ukraine, where he met his wife, a Ukrainian Jew. Together, they moved again to Israel where Arieli worked for an anti-terror unit within the defense ministry.

But Ukraine lured Arieli back.

He received a job offer from a friend to work within Kyiv’s Jewish community as an educator. He later served as the deputy CEO of United Ukrainian Appeal. Then the Ukrainian Military tapped Arieli as a tactical trainer for units that were trying to quell the separatist insurgency in Donbas. 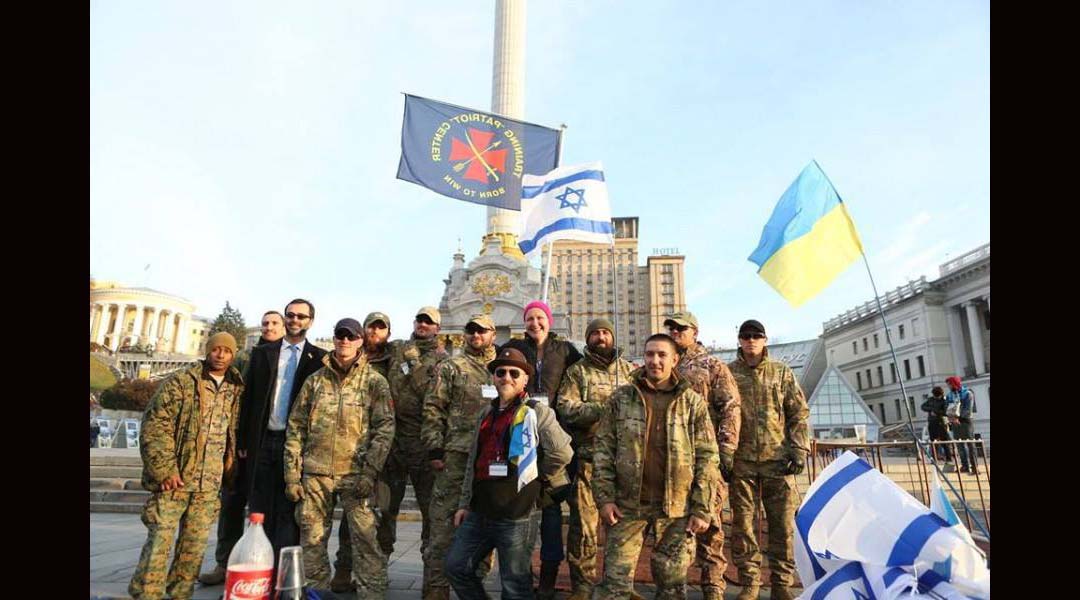 Tzvi Arieli is pictured here in 2015 with other Ukrainians and Israelis involved in the military training he has offered. (Courtesy Arieli)

Most recently, Arieli was running a “computer business,” which like many other enterprises in the country, has come to a standstill because of the war.

After more than a decade in Ukraine, Arieli feels himself a native. And that’s exactly how he is viewed, he said.

“Jews became very much more intertwined with Ukrainians and Ukrainian identity since the country became independent in 1991,” he said. “This is something many Americans and Israelis don’t understand.”

He recalled when his Ukrainian boxing coach was dismayed that a champion selected to represent the country was not “100% Ukrainian.”

But the coach’s line of thinking, Arieli continued, revealed the absence of antisemitism in post-Soviet Ukraine. “He said only Ukrainians and Jews should represent Ukraine.”

Many Ukrainians see Israeli leaders’ refusal to yield to their country’s adversaries as a model for themselves. Israel’s spy agency, Mossad, is seen to represent the potential of Western intelligence that could help Ukraine in its time of crisis, Arieli said.

That perception has put Arieli in some odd circumstances.

“Many Ukrainians think, or wish, that I am from Mossad,” he said, adding with a laugh, “I try to convince them that I am not, but sometimes it is better if they think that I am. It’s like making their wishes come true.”

Arieli himself is furious with what he characterizes as Israeli Prime Minister Naftali Bennett’s lack of support for Ukraine. While Israel has sent substantial humanitarian aid to the region and set up a field hospital in western Ukraine, it has not provided the specific military aid that Ukrainian President Volodymyr Zelensky requested. Bennett has sought to maintain relations with Russia even as other countries have imposed steep sanctions.

Bennett has sought to play a significant role in efforts to broker negotiations between Ukraine and Russia, and Zelensky said this week that peace talks could potentially take place in Jerusalem. But Arieli dismissed the argument that Israel needs to tread lightly because of Russia’s role in Syria, which affects Israeli security.

“A country’s leadership should decide what is good and what is bad. And Bennett says, ‘We don’t want to take sides,’” he said.

Pointing to Russia’s attacks on civilian targets, he added, “Russia is killing innocent civilians every day, and Bennett is not going to say the truth? Russia is on the wrong side. You can’t be neutral towards this. This is not a kosher position.”

Arieli is also “really angry” with Israel for a more personal reason: his dog.

Prior to the war, as he considered the evacuation of his family, Israel was Arieli’s first choice. But that changed, he said, when he was told by Israel’s Veterinary Services, a government body, that since his labrador was younger than one year, the puppy required another round of rabies shots and would need to stay in Ukraine for a month before coming to Israel. (Since the war began, Israel has relaxed entry rules for pets who are accompanying refugees).

“Our dog thinks we are his parents. He sleeps with us. We won’t leave him alone. Israel should make an exception in times like this,” he said.

Arieli’s wife and children, ages 13 and 14, are in Germany with the support of a rabbi in Stuttgart. Pupsik the puppy has made it there as well.

Meanwhile, the soldier’s apartment in Kyiv close to the Dnipro River was still standing as of Tuesday, but he wouldn’t be surprised if that wasn’t the case for long. “A few apartment buildings right next to mine were destroyed by Russian shelling,” he said.

Arieli’s links with Ukraine go beyond his wife. Like many Ukrainians, he is a native Russian speaker, and like many Russian-speaking Ukrainians, he has long been a proponent of Ukraine’s independent identity from its former political boss.

When the war erupted, he trained civilians to become soldiers in the newly formed Territorial Defense Force, overseen by the Ukrainian military.

But Arieli, who has previously expressed public concern about the military’s standards and training, admits he was frustrated.

“You can have 150 people every day, another day 150 arrive and most of them do not know how to shoot. It’s hard to see the progress when you are training someone who has never held a gun,” he said. 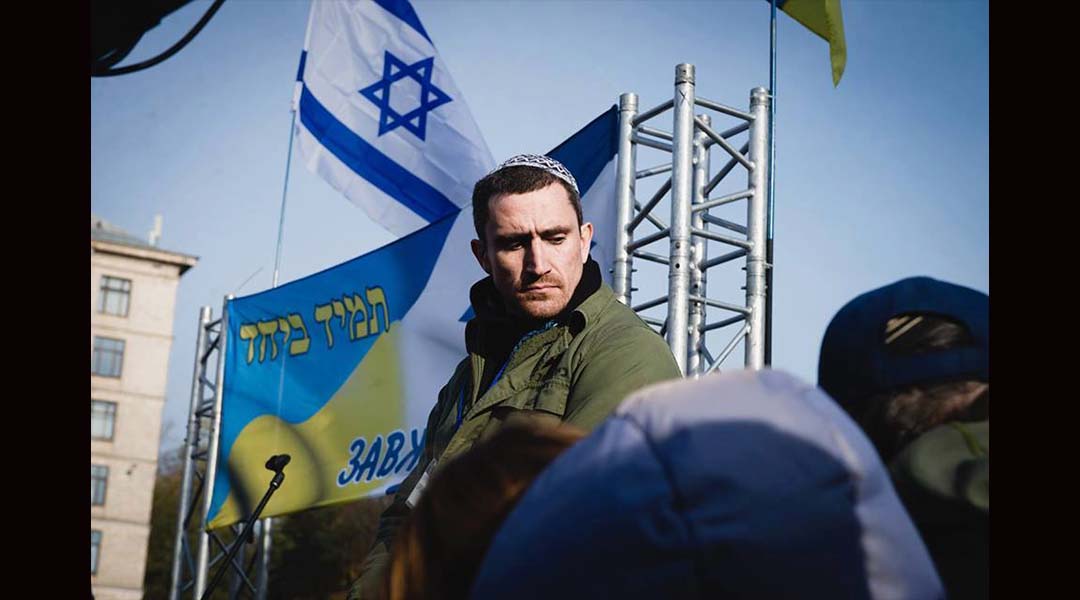 Israeli-Ukrainian Tzvi Arieli appears at an event promoting ties between the two countries in 2015. (Courtesy Arieli)

So he asked his fellow soldiers where he could be most useful — and that might just be in the forest west of Kyiv.

Although Arieli cannot say exactly what his unit’s plans are, he offered possible hints by going into detail about “the absurdity” of Russia’s land campaign.

“There are only a few roads from Belarus for tanks, and the Russians had mile after mile of tanks on these roads, out in the open. They are using these old Soviet tactics which make them sitting ducks,” he observed.

Confirming reports that Russian forces have sustained severe losses, Arieli said the tanks were constantly breaking down, blocking the road and running out of gas. “There are fewer tanks and soldiers here every day,” he said.

Despite his optimism about the prospects for Ukraine’s military success, Arieli was worried about Russian President Vladimir Putin’s next move.

“It’s a very dangerous situation because there’s a 50-50 chance he could use nuclear weapons,” Arieli said. “He doesn’t want to have Ukraine, he wants to destroy it.”

He is also distressed about the abrupt and brutal turn his life has taken.

“This war has ruined our lives; we’ve lost everything,” he said. “You know, I really don’t like violence, but what choice do I have now?”