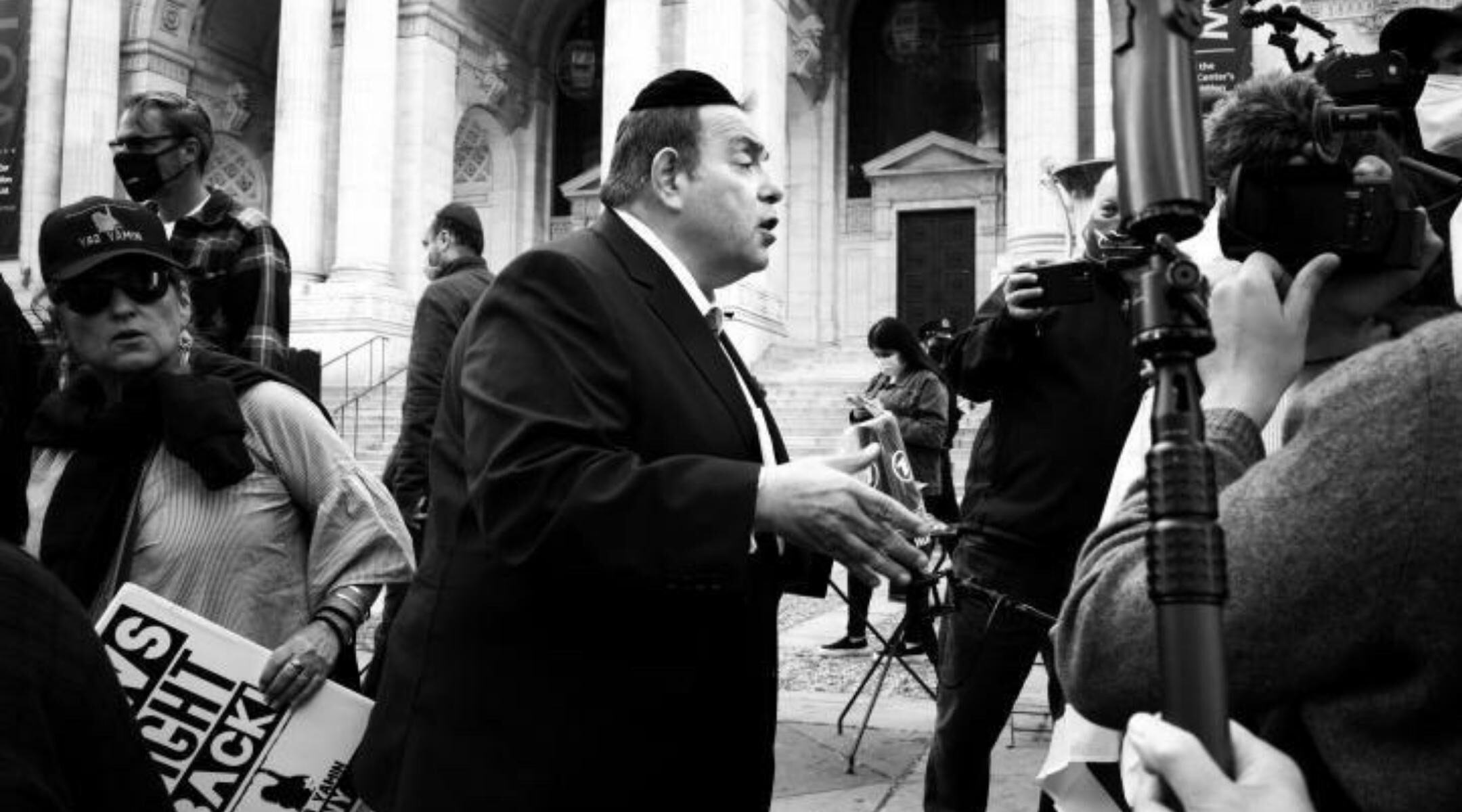 Heshy Tischler announced that he is running for both district leader and state senator. (Courtesy)
Advertisement

(New York Jewish Week) — An Orthodox activist who led the charge against city’s COVID regulations said he is running for district leader in Brooklyn’s District 48, hoping to take advantage of Mayor Eric Adams’ bid to topple the current office-holder in Borough Park.

Heshy Tischler, a radio host and political gadfly, pleaded guilty last year to charges that he instigated a riot over COVID restrictions among haredi Orthodox Jews in Borough Park. He later ran an unsuccessful race for City Council.

Tischler still has political ambitions, and he told the New York Jewish Week that he would challenge the current district leader, David Schwartz. Schwartz is also being challenged by Penny Ringel, an associate of Adams. The Adams administration allegedly wants to replace Schwartz with Ringel due to the former’s support of mayoral candidate Andrew Yang in the 2021 Democratic primaries, according to a report by the New York Post.

That appears to be a lot of wrangling for a part-time, unpaid job. District leaders help to get more members of their party elected and select judicial nominees for their district.

And it is not the only office Tischler is seeking. Tischler told the New York Jewish Week that he is also collecting signatures to challenge State Senator Simcha Felder, adding that he has what it takes to work both jobs. “I fight for the city, and I fight against the city,” he said. “I know city politics. There will be a change. You’ll hear me scream like I always do.”

Tischler said that whether it’s Schwartz or Ringel for district leader, they are not doing enough to help the community. “We have crime rising in our neighborhood,” Tischler said. “We have drug dealers in the middle of Borough Park. And these guys don’t do anything. Once a year they come out and distribute food, that’s it.”

Ever the provocateur, Tischler said he collected signatures outside of David Schwartz’s synagogue. “He wasn’t too happy,” he said about Schwartz. “People were signing my petitions right in front of him. I’m not embarrassed at all. That’s the way it is.” 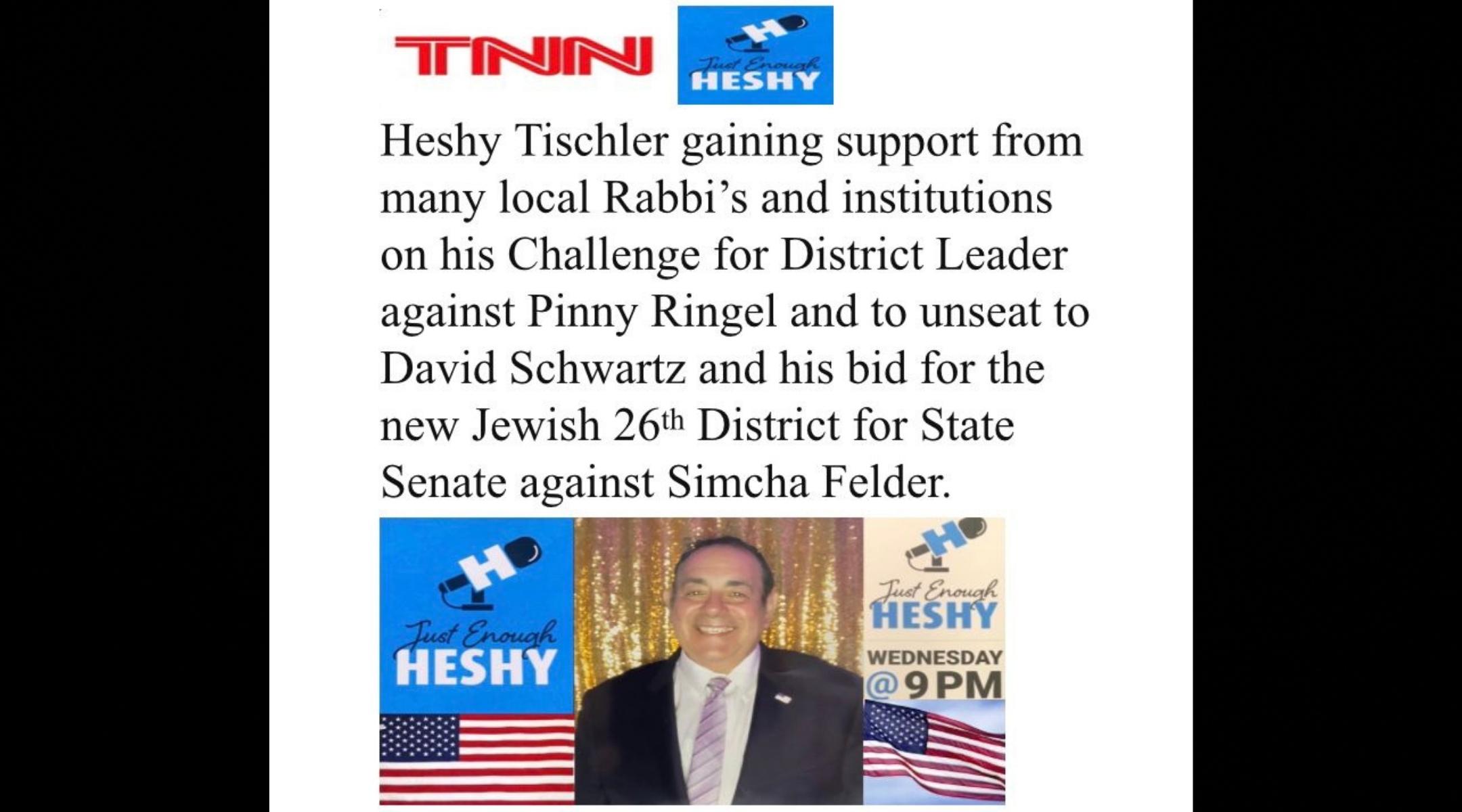 Heshy Tischler sent out a press release on Tuesday announcing his run for district leader and state senator. (Courtesy)

Tischler is hoping to gain support in spite of — or maybe because of — his political antics. He gained favor with some within the Orthodox community when, in 2020, he helped open a local park that was closed during pandemic shutdowns.

Ringel previously served as a liaison for former Mayor Bill De Blasio and currently serves in the Adams administration as the assistant commissioner for the community affairs unit.

This is not Tischler’s first run for local political office. In 2021, he came in fifth in the Democratic primary for the City Council race in District 48. He also lost to Councilman Kalman Yeager with only 3.95 percent of the vote in 2017 for District 44.

Tischler sent out a press release Tuesday that was riddled with typos, in which he announced he is running for district leader and state senator. It said that he gained the support of “many local rabbi’s and institutions,” though he never gave any specific names or places.

A political observer in the Orthodox community said that Tischler has “absolutely no support in the community whatsoever.”

“He has never received a single endorsement from any politician, political activist or rabbi ever,” he said.