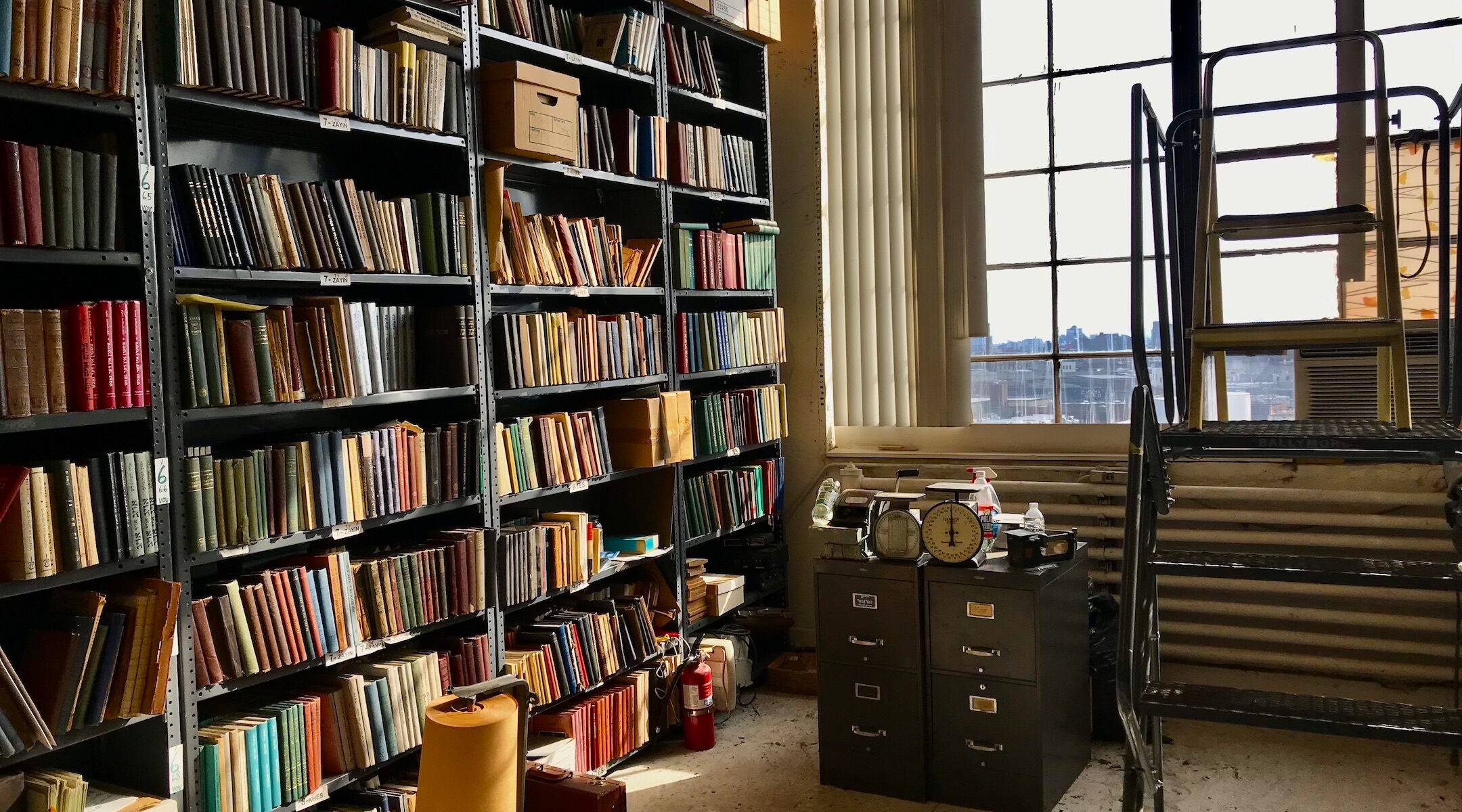 Last fall, despite the mountain of books, the piles of fliers, CDs, pamphlets, and paraphernalia, and the decades of tangible love beating through the atmosphere of the place, CYCO found itself on the brink of shuttering its floor-to-ceiling windows that overlook the Pulaski Bridge and the East River. (Julia Gergely)
Advertisement

(New York Jewish Week) — In a rickety warehouse in Long Island City, reached only by a footbridge that crosses underneath the Long Island Expressway, some 80,000 Yiddish books are stacked on shelves in a large, sunlight-filled room that overlooks the Pulaski Bridge, Midtown Manhattan to the west, and Downtown Brooklyn in the distance.

This is the CYCO Yiddish Book Center, whose roots date back to 1938, when it began as a space in Manhattan to give Yiddish writers and readers a safe haven just as antisemitism was rising in Europe and the future of the language was being altered forever.

Throughout its more than eight decades of operation, the Central Yiddish Cultural Organization was — and still is — a place for ideas, for collaboration and for celebration of all things Yiddish.

It is not a bookstore, said Hy Wolfe, the stalwart Brooklyn-born Yiddish actor who runs the organization, but a book center, where New York can celebrate Yiddish culture, authors and artists. CYCO also operated as a publishing house for many years, with nearly 300 titles bearing its imprint.

But all that history seemed in peril last fall, when the Atran Foundation, which has been funding CYCO through grants since 1956, decided to cut off its stipend. Dianne Fischer, who had been the president of the foundation for 23 years, retired, and the current board decided that CYCO was not reaching enough people, nor making enough money (only $3,000 to $5,000 a year in book sales, according to Wolfe) to continue funding it in perpetuity.

Wolfe was able to secure more funding from the Azrieli Foundation, which has been the other major supporter of CYCO, but he knew that time was running out. He needed to raise $30,000 to cover the year’s rent and upkeep.

“I am not a good businessman. It’s just the truth. I will never ask somebody for money,” Wolfe said. “Plenty of students come in that don’t have money. I say to them, ‘When you make it and you have a job, you need to remember your commitment to us and send us a donation.’ That’s who I am on a handshake.” 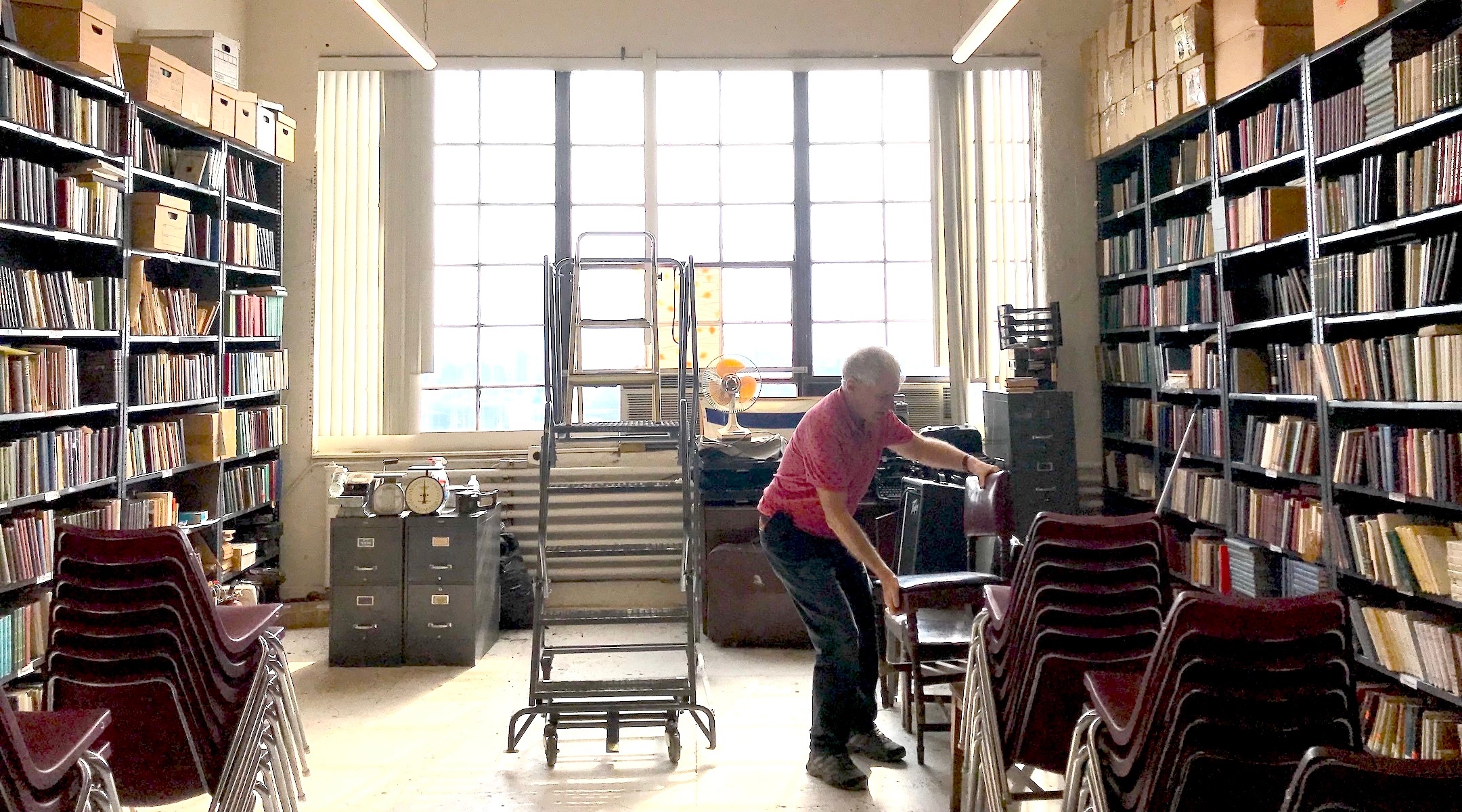 The son of Holocaust survivors, Wolfe grew up surrounded by Yiddish, and has watched the language fade as the children and grandchildren of secular Yiddish-speakers turned to English. Today Yiddish is a first language – a growing one, at that – only among Hasidic and haredi Orthodox Jews in various New York neighborhoods.

“Little Yiddish organizations have come and gone by the hundreds, if not more,” Wolfe told the New York Jewish Week. “The only ones that still exist today are the ones where they have stubborn old Jews like me.”

In addition to his acting career and sitting on the boards of other Yiddish organizations, like the Sholem Aleichem Cultural Center in the Bronx, Wolfe also worked for decades as a bartender in jazz clubs, another New York institution he’s seen slowly disappear. For his work at CYCO, which he has been doing since the late ’90s, he doesn’t take a salary. He organizes events at the center, tries to catalog books and, most of all, offers tea and good conversation to any Yiddish book lovers who make an appointment to stop by.

Now, it seems, the next generation has arrived, in the form of two activists with a soft spot for secular Yiddish culture and the work of CYCO.

Last November, Wolfe was describing his financial predicament to writer and artist Molly Crabapple (who wrote her own piece about the organization), a conversation which Rosza Daniel Lang/Levitsky overheard. Instead of mourning what could have been the eventual end of CYCO, the two sprang into action.

They helped organize a group called Friends of CYCO, which set a $90,000 fundraising goal, nearly three times the amount Wolfe determined would be needed for rent and upkeep. Three weeks in, and they have already raised over $33,000, with more than 450 contributors from nearly every continent.

Lang/Levitsky, a cultural worker and organizer who described herself as “a long-time person in the Yiddish world,” only visited CYCO for the first time last November, and quickly moved from a customer looking for a poetry book to a major organizer of the revitalization effort.

In addition to keeping the lights on, Friends of CYCO wants to help Wolfe expand the center’s public programming.

Wolfe also hopes, in addition to paying performers and speakers to appear at CYCO’s events, they might be able to hire a permanent administrator who will help digitize CYCO’s catalog of books and keep the doors open for consistent hours. He also hopes, perhaps, to upgrade the computer system to something more modern than Windows 97.

When the Jewish Labor Bund closed in 2004, Wolfe brought together a group to box up its archives and bring them to CYCO’s shelves. He found the flag in a briefcase that he fished out of a dumpster. (Julia Gergely)

CYCO is hardly the last bastion of secular Yiddish culture. The Yiddish Book Center in Amherst, Massachusetts has been thriving since its founding in 1980. Yiddish theater troupes, klezmer bands, the Congress for Jewish Culture, YIVO, The Workers Circle, the Forward Association, the Yiddish New York festival and other programs have kept the flame burning. During the pandemic, Yiddish language classes at YIVO and The Workers Circle boomed.

Still, says Lang/Levitsky, “it’s hard to overestimate how important CYCO has been. A vast number of major Yiddish writers have had their work published by CYCO. CYCO’s editions and publications are on practically every shelf of Yiddish books. It really is an organization that’s helped keep the global web that is the Yiddish language alive and vibrant through the last 70, 80 years of its lifetime.”

The physical space of the book center “makes a whole world of things possible,” for the future, she said. “There aren’t many [Yiddish] places left in New York, where you can walk into a room and take a Yiddish book off the shelf.”

Wolfe is grateful for his young benefactors.

“I was already prepared for the worst. I knew that come the end of March,  we were going to have to think about how to pack up all these books,” Wolfe said. “But I’m very optimistic. God bless Rosza, God bless Molly. These young people care.

“I’m getting old — I am old,” he added. “I would like to see the next generation step up. I don’t need to step aside but if, for political reasons, they’d rather see a different face running this, then I will.”