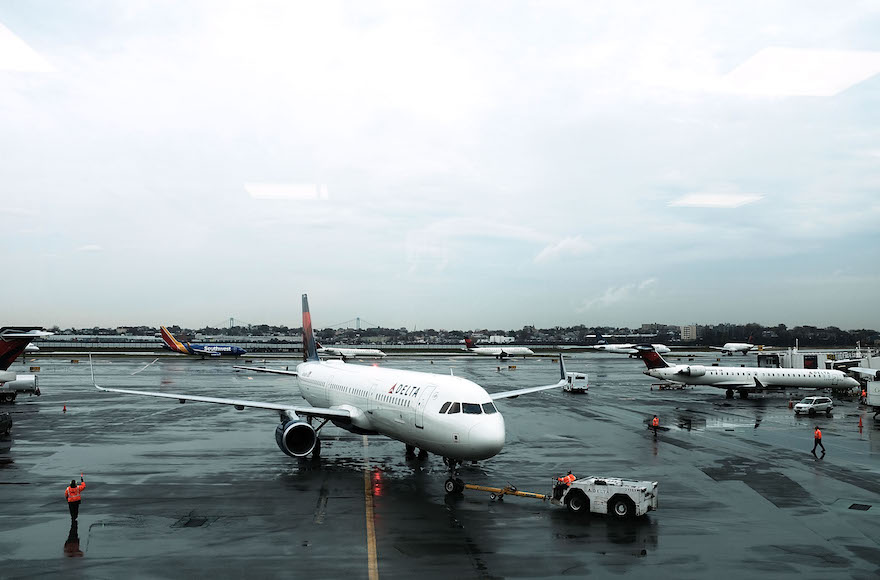 (New York Jewish Week) – Nineteen Orthodox Jewish women blocked from the second leg of a flight from Ukraine to New York last summer are suing the airlines for religious discrimination.

The group of young women and their chaperones were prevented from boarding a flight traveling from Amsterdam to New York allegedly for eating outside of designated mealtimes — a violation of the airlines’ COVID-19 protocols.

However, in a discrimination suit filed Tuesday against Delta Air Lines and KLM Royal Dutch Airlines, the plaintiffs said they only removed their masks to eat the kosher food they had brought themselves, and that airline personnel never informed them that they were not adhering to the mask requirements.

The complaint alleges that no other passengers were punished for removing their masks or eating their own food, and the women were singled out “solely for the purpose of unlawfully harassing plaintiffs because of their Jewish race, ethnicity, and/or religion.”

The 19 plaintiffs, all from New York, were part of a tour group of 54 young Hasidic Jewish women and their chaperones. They had spent two weeks touring Jewish heritage sites in Ukraine, Hungary and Poland.

On Thursday, Aug. 5, the women were supposed to fly back to New York from Kyiv via Amsterdam. According to the complaint, a flight attendant on the first leg told a group leader that some of the women were violating Covid-19 security protocols by removing their masks to eat outside of mealtimes but assured her it was just a warning.

When the group attempted to board their next flight in Amsterdam, 19 of them were not allowed to board. Two of the barred passengers had not even been on the first flight from Kyiv to Amsterdam, the suit alleges. The plaintiffs spent the night in the airport.

The suit also alleges that the chaperones were told they would be arrested if they did not board the second flight without their charges.

The 19 travelers were also removed from a flight the next day after they attempted to switch seats with other, non-Jewish passengers in for those passengers to sit together. Other passengers who also switched seats were not removed from the plane, the complaint alleges.

In the end, the group took a train to Antwerp, Belgium — home to a sizable Orthodox Jewish community — where they spent Shabbat. They flew from Brussels to New Jersey on Sunday, August 8.

In a statement to Business Insider, Delta did not comment on the pending litigation, but said “compliance with flight crew member instructions for the safety and well-being of everyone is paramount. Delta also has zero-tolerance for discrimination in any form in all aspects of our business.”

In 2018, four New York-based Delta employees filed a lawsuit against the airline saying its management has an “anti-Jewish, Hebrew, and ethnic Israeli attitude.” The suit was dismissed by a judge in 2020.