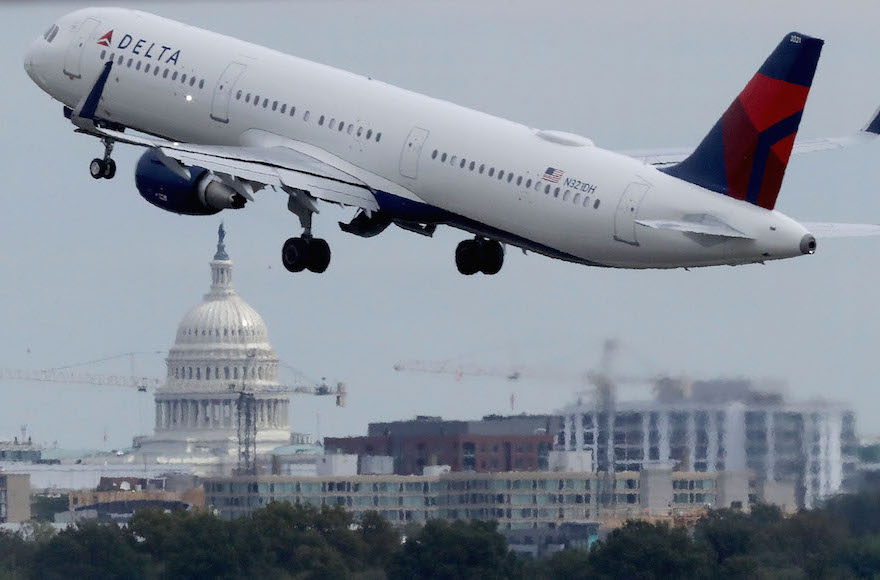 (JTA) — Four current and former flight attendants have filed a federal lawsuit against Delta Air Lines alleging that the company’s management has “an anti-Jewish, Hebrew and ethnic Israeli attitude.”

The suit was filed Tuesday in U.S. District Court in New York’s Westchester County. The plaintiffs worked on the airline’s New York-Tel Aviv route. Two are Jewish and two say there were disciplined or subjected to a hostile work environment for their association with Jewish flight attendants and passengers, attorney Brian Mildenberg said in a statement issued Tuesday.

In the suit, the plaintiffs allege that Delta management “through words and deeds, operate under an express assumption that ethnic Jews and Israelis, as employees and passengers, cannot be trusted, are aggressive and inappropriate, and engage in what are deemed to be ‘strange’ behaviors by conducting prayers on the flight and requiring special dietary accommodations (kosher meals).”

The lawsuit also claims that Delta has punished Jewish and other flight attendants, including with suspension or termination, for legally sharing their companion travel passes with Jewish individuals who fly to Tel Aviv “solely on the basis of their Jewish and Israel ethnicity and ancestry,” It also says  Delta has punished them for being Jewish or for their association with Jews and Israelis, “and has either restricted their employment rights, denied them promotions, or subjected them to harassment and abuse, for pretextual reasons.”

Among the incidents cited, according to reports and first reported by TMZ, is a flight attendant who says she was fired in March because she is Jewish. While the company says it fired her because she missed a flight, the woman says she was on maternity leave at the time.

In a second incident, a non-Jewish flight attendant who shared her travel companion pass with a longtime Jewish friend was suspended without pay and had her travel privileges revoked. She alleges that it is because the friend was Jewish.

Delta responded in a statement that it “strongly condemns the allegations of discrimination described in this suit and will defend itself vigorously against them. As a global airline that brings people across the world together every day, Delta values diversity in all aspects of its business and has zero tolerance for discrimination.”

Delta’s New York-Tel Aviv line was discontinued after the 9/11 attack in 2001 and reinstated in 2008. The airline also has a direct flight to Tel Aviv from Atlanta.

Following its merger with Northwest Airlines in 2008, Delta dropped a Minnesota rabbi from its frequent flier program for earning too many miles.