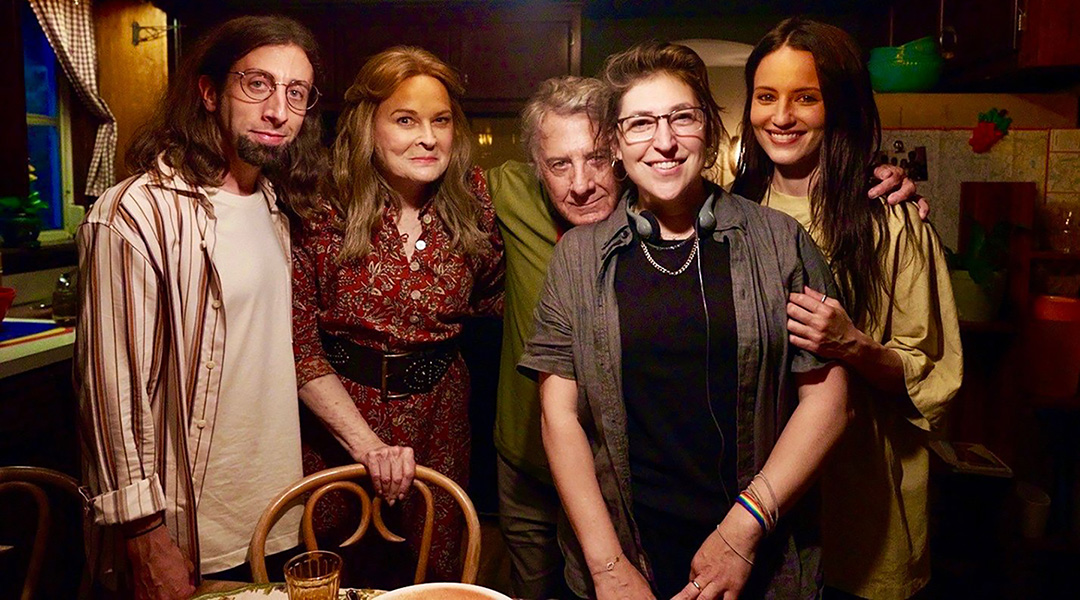 (JTA) – Mayim Bialik has become arguably the most visible Jewish face on TV, thanks to her gig hosting “Jeopardy!” and her presence on ever-present “The Big Bang Theory” reruns. But for her latest project, “As They Made Us,” Bialik stepped behind the camera to write and direct a semi-autobiographical, low-key melodrama about a Jewish family encountering death and dysfunction.

Will it have tearjerker moments? Well, it is produced by Chicken Soup for the Soul (via its film distribution arm, Screen Media).

Dianna Agron of “Glee” fame plays Abigail, a divorced mother and full-time print magazine writer who is somehow still able to afford a sparkling house. The generic Jewish publication that employs her, titled The Modern Jew (no joke), must pay quite well — although her mother Barbara (Candace Bergen) demands to know why she hasn’t gotten a cover story yet.

Barbara is like that, needling and poking in her adult daughter’s life, spreading ill will about others while blind to the troubles at her own doorstep: namely, that her husband Eugene (Dustin Hoffman, alternating between his cuddly and abrasive personas) has a degenerative illness. “He’s gotta eat more!” an in-denial Barbara yells at the doctor trying to convince her he needs hospice care. “Maybe if you gave him an enema he would make room for more food.”

This is a family story, so the drama focuses on interpersonal dynamics and long-held grudges. There are many flashbacks to Abigail’s younger days living under her parents’ roof, where we see that her father, a failed novelist who always regretted settling down with a family, was often physically abusive to his children. Bialik, who had the cast and crew recognize the Sabbath while on set, told the Jewish Telegraphic Agency’s sister publication Kveller that she wrote the script in the aftermath of her own father’s death, shortly before Passover 2015.

Bialik casts her “Big Bang Theory” co-star Simon Helberg as Abby’s brother Nathan, a hipster academic who, owing to his childhood trauma, has avoided his parents his entire adult life — leaving Abby to clean up their messes. We assume at first that Nathan’s central anger lies with their father for his explosive outbursts, but in fact it becomes clear their mom’s endless insults did the more lasting damage: “His wreckage was tangible. Hers was so insidious and disturbing.”

Judaism becomes a quiet stabilizing force in the story, with Abby pushing her kids to say the Shema prayer every night before bed even as her world crumbles around her, and Agron’s character wearing Bialik’s own Star of David necklace throughout the film. (The household appears not to keep kosher, but there are hand-drawn menorahs taped on the walls.) When grief enters the story in its third act, the Shema comes out again — as does a Yiddish song, “Voz Geven Iz Geven Un Nito,” that has been a lullaby in multiple generations of Bialik’s family.

We never learn why Abby got divorced, although we can gather her parents didn’t exactly model a healthy marriage for her. In this and other ways, the subtleties of the film’s family dynamics can be quiet as a whisper. Bialik admits that one aspect of the family’s tension, the fact that Abigail is more religiously observant than her parents, goes largely unaddressed in the film, telling Kveller, “That’s a whole other movie.” Still, the one we have will likely feel familiar to many a Jewish family that has encountered grief and strife.

“As They Made Us” opens Friday in select theaters and on VOD.