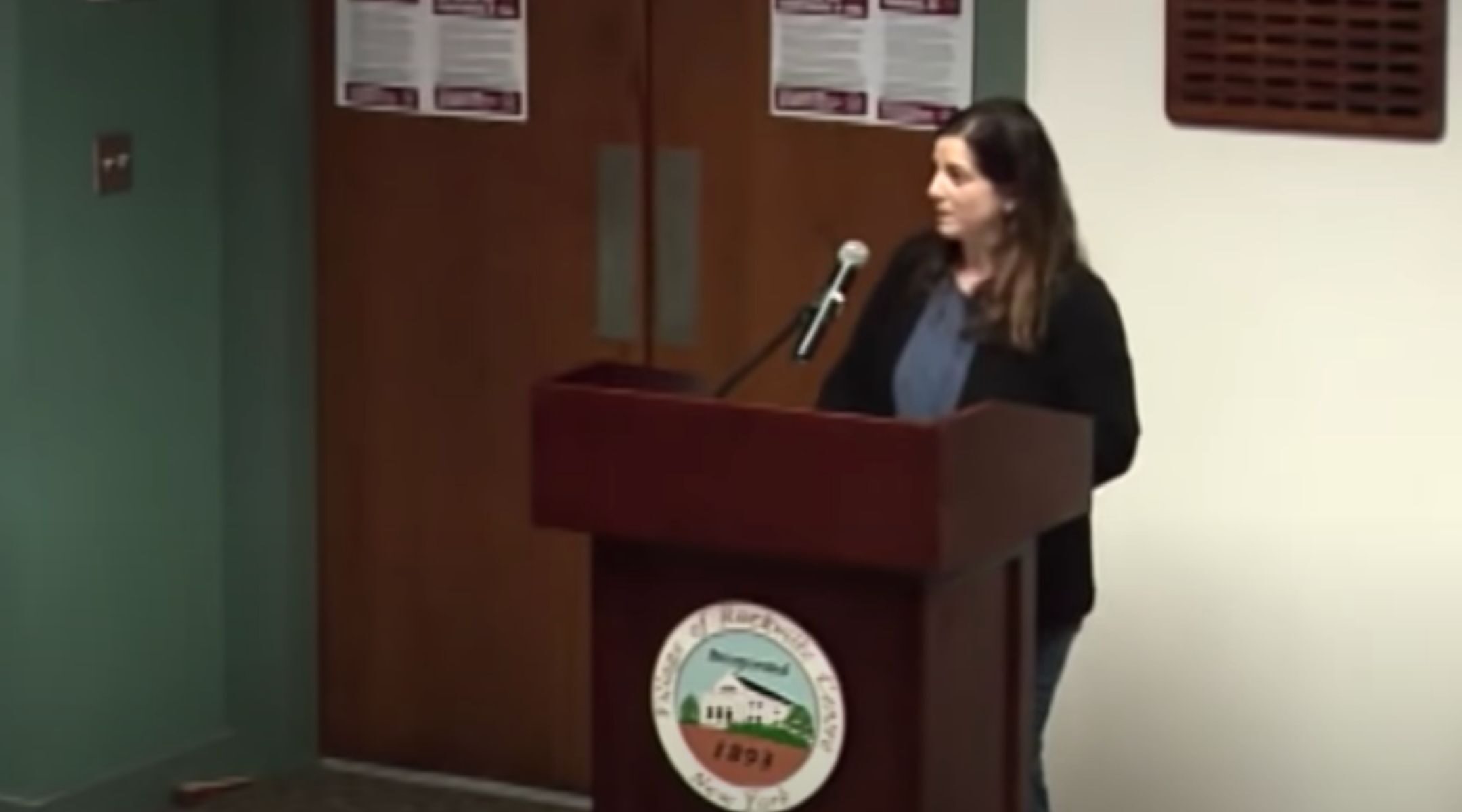 Michelle Zangari spoke at a Rockville Board of Trustees meeting where she warned about the Orthodox Jews coming into the neighborhood. (YouTube)
Advertisement

In the video, taken during the Rockville Centre Board of Trustees Meeting on April 4, Michelle Zangari is seen for eight minutes warning about Orthodox Jews opening synagogues and moving into Rockville Centre.

Zangari was particularly concerned that the village would come to resemble the nearby Five Towns, an area with a large Orthodox Jewish population. “I’m asking you to amend the [zoning] code,” Zangari said. “So a synagogue cannot be on every residential street like they are in the Five Towns. Please believe me and other Five Towns transplants who know what can happen because we watched it.”

She asked for an amendment that would prohibit houses of worship in residential zones, and specifically called out a property with a large menorah on its front lawn. “Many of the surrounding neighbors assumed it was maybe a Hanukkah decoration left up too long,” Zangari said. “However, I know all too well. That is not the case. The menorah is a standard symbol in synagogues.”

She added that seeing this menorah is “very emotional” because Five Towns “transformed” after rabbis brought their synagogues and congregants to the areas in the 1980s. “As you might imagine, existing residents of those areas are less than pleased when neighboring homes used as small synagogues started to grow in congregants, resulting in large crowds during the Sabbath,” Zangari said.

She also said that residents received unsolicited offers for their homes from Jews and had to relocate due to soaring real estate values.

At the end of Zangari’s speech, Rockville Centre Mayor Francis Murray said that he’ll be speaking with the village’s attorney about “what we can do to amend” the laws.

“The board will be very concerned,” Murray said in the video.

Here’s a saved version of the 8 minute Antisemitic video, before it was made private on YouTube.

Shame on the speaker & shame on the Rockville Centre village board @VillageRVC for suggesting that it’s acceptable to redline Orthodox Jews out of your town
pic.twitter.com/4vQJeF722R

A rep from Murray’s office said the mayor has been out of town, but confirmed that it was him in the video.

The Mayor’s Office and the Trustees Village of Rockville Centre released a statement on Monday that said their responsibility is “to provide an open forum for all residents.”

“We will not let divisive rhetoric of any kind define us,” the statement said. “We embrace understanding and acceptance of all.”

Rockville Centre Village eventually made the video private, but it was saved online and shared by many others.

The so-called Five Towns — Lawrence, Cedarhurst, Woodmere, Hewlett and Inwood — are located on Long Island’s South Shore in Nassau County. The Jewish population there has been growing since the early 2000s, and counts the metropolitan area’s highest percentage of Orthodox residents outside of the Orthodox neighborhoods in Brooklyn.

Zangari runs an interior design business in Rockville. Her Facebook page has been deleted and she did not respond to any calls.