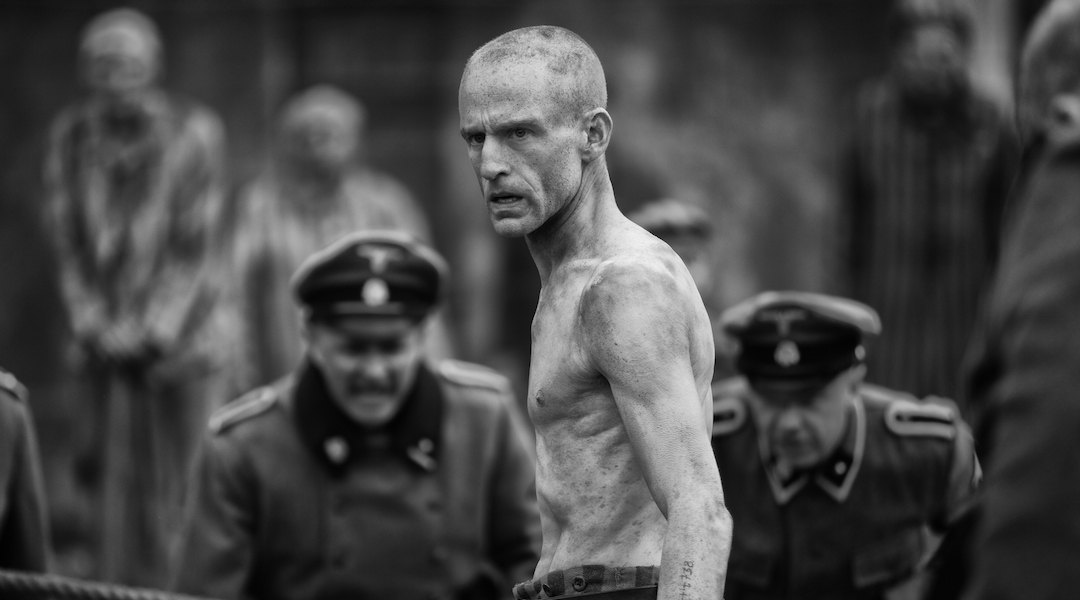 For scenes set in Auschwitz, Ben Foster said he denied himself food so that his body would appear emaciated as a tribute to real survivors. (Leo Pinter/HBO)
Advertisement

Foster, playing real-life Auschwitz-survivor-turned-professional-boxer Harry Haft, is finally confronting the inescapable fact of his existence: that, having experienced the trauma of the death camps, he will have to figure out a way to pass on its memory to the people he loves, or let it eat him up inside.

Confronted by his wife Miriam (Vicky Krieps) about the darkness he still holds inside him, and whether he’s prepared to tell his son about it, Harry breaks down and sobs, unlodging a new memory from the camps, this one about what he had to do to his best friend in order to survive.

It’s a powerful moment. And it’s even more remarkable because the entire scene was improvised.

“The scene is supposed to end with Harry saying, ‘You don’t know the worst part of me,’” Foster recounted to the Jewish Telegraphic Agency. “And Miriam is supposed to get up and give him a hug… but Vicky didn’t get up. She didn’t give me a hug. So I’m hanging there at the sink and she starts antagonizing me and asking tough questions, and Harry — I — was getting aggravated.”

Not knowing what else to do, Foster-as-Harry started telling the story from the camps, which he “remembered” because the film crew, led by Oscar-winning director Barry Levinson, had already shot the footage. “It was already inside, and it just started falling out,” Foster recalled.

By the end of the scene, Harry’s metaphorical guts are spilled all over the set, along with an actual glass of orange juice being used as a prop. Levinson had told Krieps to deliberately go off-script.

“True to Barry form, he didn’t tell me,” Foster said. On a set run by Levinson, he said, “explosive things that feel lived-in can happen.”

“The Survivor,” which debuts on HBO April 27 — Yom HaShoah, Israel’s Holocaust remembrance day — after premiering at the Toronto International Film Festival last fall, is not your typical Holocaust movie. Though it does tell the improbable story of a single Jew’s survival, it doesn’t linger on the misery of the camps themselves. Most of the film (which was co-produced with the USC Shoah Foundation) takes place after the war, as Harry attempts to resettle in an immigrant-heavy Brooklyn Jewish community suffused with loss. He uses his survivor’s status to create a marketable ringside identity (“In this corner, the pride of Poland, the survivor of Auschwitz!”) even as he remains haunted by his time in the camps.

The film follows the long tail of Harry’s life as he retires from boxing, starts a family, battles his inner demons and tries to find out what happened to his childhood sweetheart in the camps. For Foster, whose grandmother came to the United States from Romania in the 1920s to escape anti-Jewish pogroms, starring in the film “expanded my relationship to the courage of those who left to come here.” 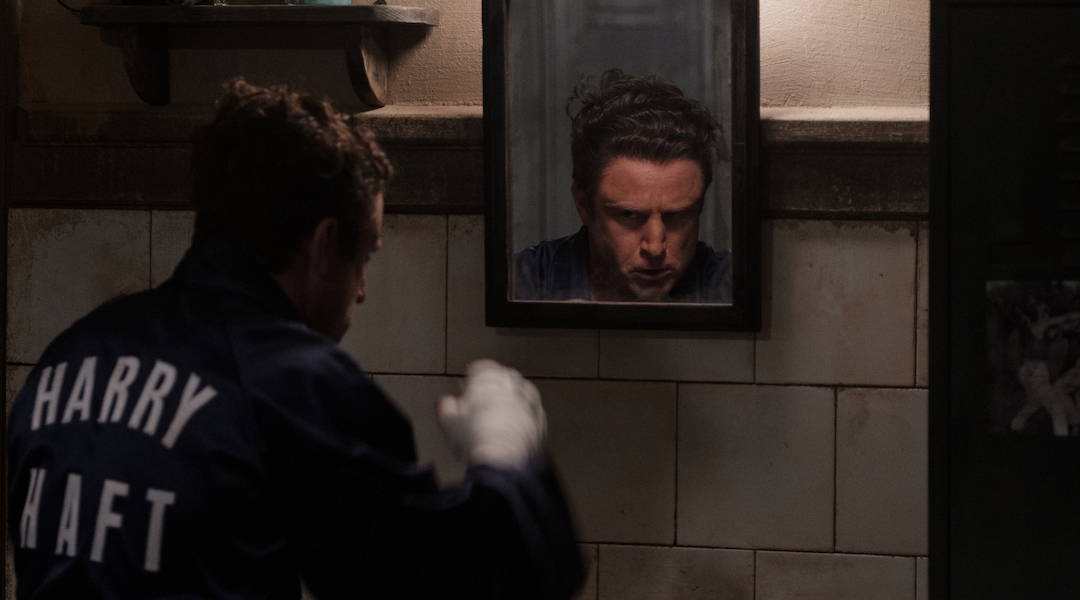 Ben Foster as Harry Haft, a Holocaust survivor who becomes a professional boxer, in HBO’s “The Survivor.” (Jessica Kourkounis/HBO)

It also reunited him with Levinson after 23 years: One of Foster’s first-ever roles was as the young Jewish lead, Ben, in the 1999 autobiographical comedy “Liberty Heights,” one of a series of Levinson films based on the director’s own Jewish upbringing in Baltimore. Foster made that film when he was 17, as a prelude to his later acclaimed performances as tough yet deeply vulnerable men in such films as “The Messenger,” “Leave No Trace” and “Hell Or High Water.”

“I’ve been carrying Barry with me all these years,” he said.

Though Foster’s interpretation of Haft was informed by the boxer’s son Alan Scott, who wrote a biography of his father, he didn’t actually meet Scott until the team was deep into filming. Foster, who grew up Jewish and had a bar mitzvah, instead worked with a Yiddish expert on his accent and visited the Auschwitz memorial in Poland, which he says gave him an “unhealthy obsession” with pushing his body to the breaking point: He followed a strict diet so he could look emaciated for the camp sequences.

“I needed to see the bones in my chest,” he said, adding that it was his way of paying tribute to the experiences of the camps. “When you see the horrors of that, and what the survivors went through, what those who were lost went through, I couldn’t in good faith show up on set having lost 10 pounds or 15 pounds.”

After the Auschwitz segments, the crew took five weeks off filming and Foster put on 50 pounds of muscle so he could play Harry in his boxing prime. Then, for the movie’s third segment, when he plays Harry as an out-of-shape middle-aged man, the actor transformed yet again: “I was able to eat everything glorious. I’ve never been happier.”

For “The Survivor,” Foster got to work with an impressive supporting cast, including Krieps (“Phantom Thread”), Peter Sarsgaard, Danny DeVito and John Leguizamo — and Israeli actor Dar Zuzovsky, who plays Harry’s long-lost love Leah. But it’s Foster’s co-star in another upcoming movie, “Emancipation,” who is garnering the most attention right now: Will Smith, perpetrator of the now-infamous Oscars slap.

As part of the fallout from Smith’s on-camera manhandling of Chris Rock, his projects have been put on hold, including “Emancipation,” a big-budget drama about an escaped slave from “Training Day” director Antoine Fuqua. Foster, who plays a slave catcher, doesn’t know when the film will be released now. But he hopes audiences get to see it, because he sees its modern-day reckoning with American slavery as being of a piece with the reckoning with the Holocaust in “The Survivor.”

“In much the way that ‘The Survivor’ tackles the horrors and the atrocities and survival, this is following a man escaping work camps in the U.S.,” Foster said. “It was shocking, the parallels… The parallels of what we did in our own country [are] worth examining.”

“The Survivor” premieres April 27 on HBO and will be available for streaming on HBO Max.