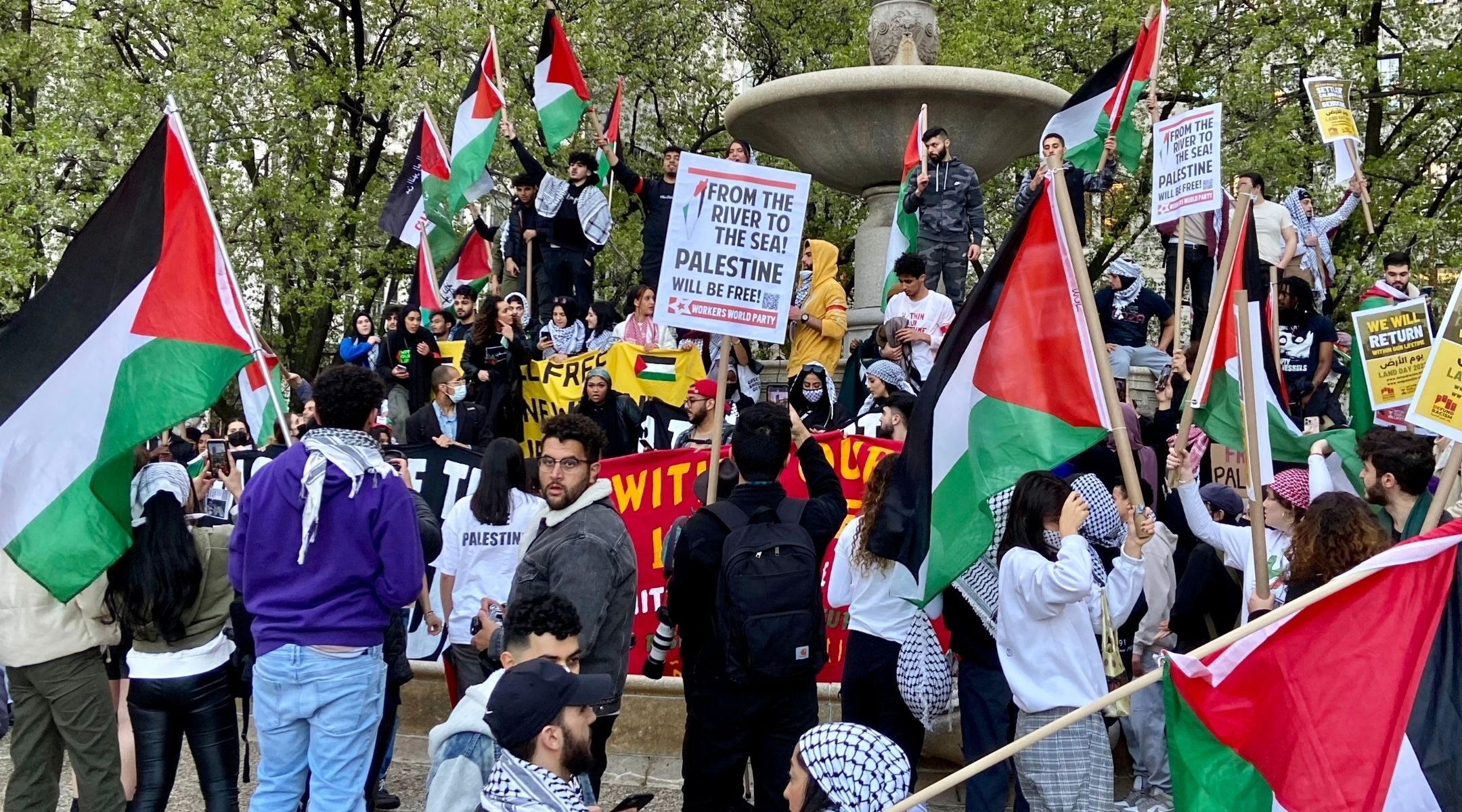 Hundreds of pro-Palestinian protestors gathered at the Israeli Consulate in Manhattan before proceeding to the fountain in front of the Plaza Hotel at 59th Street, April 20, 2022. (Jacob Henry)
Advertisement

(New York Jewish Week) — Hundreds of protesters gathered in front of the Consulate General of Israel in Manhattan on Wednesday in what was billed as an emergency rally to support Palestinian resistance and liberation “by any means necessary.”

As dozens of police officers lined up around the area, the protesters began calling to “globalize the intifada.” Tensions are high in Israel, where Palestinian rioters have clashed with police on Jerusalem’s Temple Mount and Israeli security forces have conducted raids in the West Bank.

Multiple activist groups organized the rally, including Within Our Lifetime, Samoudin and the Palestinian Youth Movement. Organizers refused to speak with the New York Jewish Week, calling it part of the “Zionist media.”

On Tuesday, the Simon Wiesenthal Center, a Jewish advocacy group, called on the city to prevent the rally because organizers used what the center called “the language of incitement.”

There was no violence at Wednesday’s rally. It started with chanting over drums of the pro-Palestinian phrase, “From the River to the Sea.” Other chants included “We don’t want no two state, we want all of it,” and “Israel, go to hell.”

Pro-Palestinian rally at the Israel Mission in Manhattan where they are calling to “Globalize the Intifada.”

Chants include “We don’t want no two state” and “Israel go to hell.” pic.twitter.com/8UfQc0Qvpc

The group then marched to the fountain in front of the Plaza Hotel at 59th Street, blocking traffic and waving Palestinian flags along the way.

A Palestinian protester with Israeli citizenship who spoke to the New York Jewish Week said he was at the rally to “protest the occupation.”

“We come here to protest so that people can see what our message is,” the protester, who asked not to be identified, said. “We don’t want to be occupied anymore. It’s been like this for a long, long time.”

He said that when he was six years old, he saw Israeli police beating up his father, “which was his first “memory ever in this world.”

“They ended up demolishing my house that day,” he said.  “It was a very traumatic experience.”

Members of a fringe Orthodox movement Neturei Karta, who oppose political Zionism, showed up to support the protesters. Rabbi Dovid Feldman said he was at the rally to call out the “bloodshed taking place” in Israel.

“We very strongly believe that the bloodshed on both sides of the conflict is because of all that was done by the Israelis,” Feldman said.

He added that there have been some antisemitic statements made at these rallies, but overall, “hate is being reduced.”

“I’m honest and I’m not denying that,” Feldman said. “I expect from other people to be honest and admit that there might be a reason that drove those people to say those things. I do choose to understand all of these statements.”

A protester burns an Israeli flag and drags it across the streets of Manhattan at the Emergency Rally to Support Palestinian Resistance and Liberation. pic.twitter.com/z26OJ350Rb

One protestor burned an Israeli flag and dragged it across the pavement. A Jewish man dressed in traditional Orthodox garb joined in to dance on the flag.

Alex Bauman, a Jewish man, said he brought members of the Zionist youth group Club Z  to observe the protest so they could see what was happening from the Palestinian side.

“Using terms like ‘the Zionist media control America’ is deeply antisemitic,” Bauman said. “When you replace Jew with Zionist, it’s just as bad.”