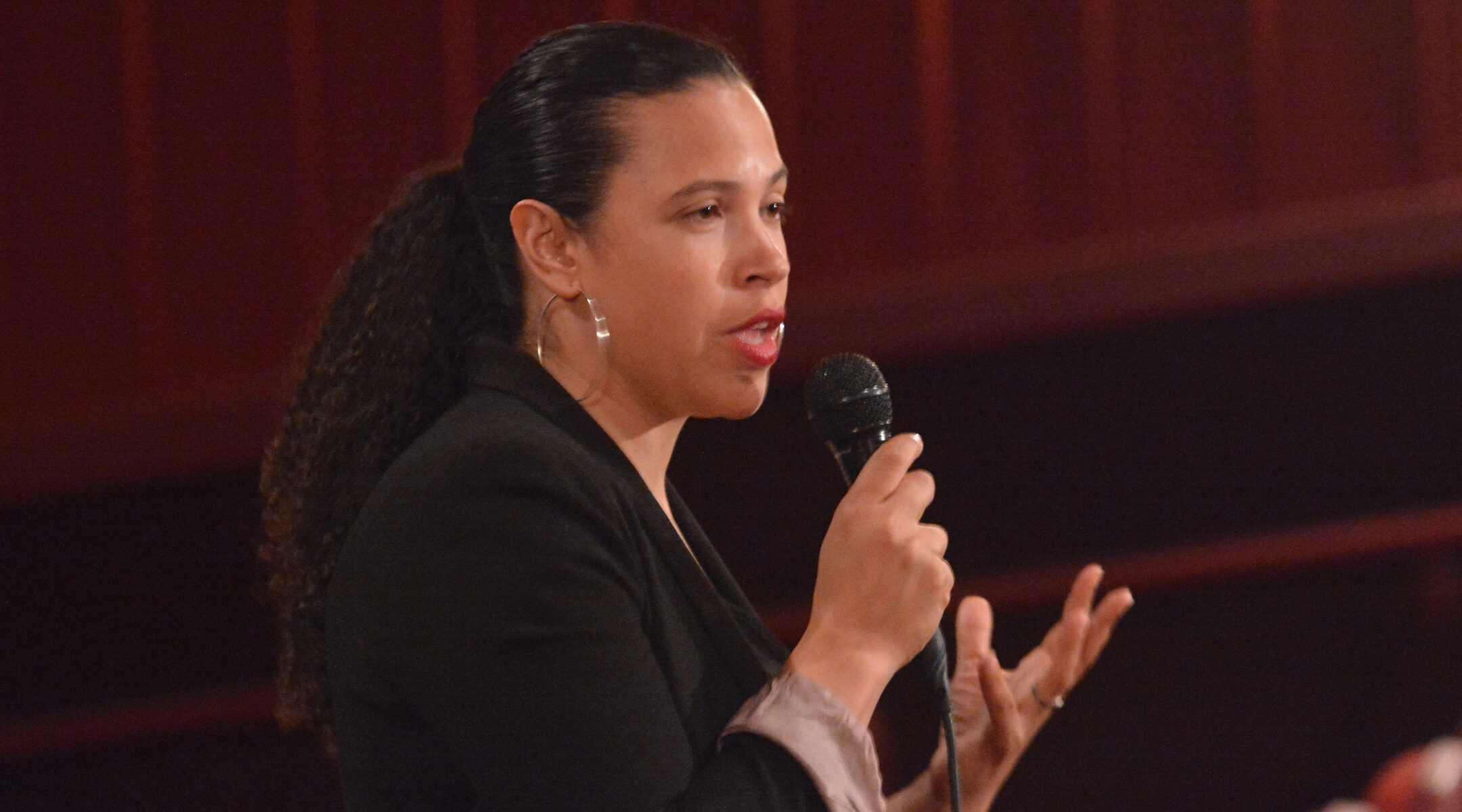 Lacey Schwartz Delgado talked about her film "Little White Lies" at an event in May 2015. (Ben Hasty/MediaNews Group/Reading Eagle via Getty Images)
Advertisement

On Tuesday, New York Gov. Kathy Hochul chose Rep. Antonio Delgado as the state’s new lieutenant governor. The 45-year-old Democrat — who represents New York’s 19th congressional district, which encompasses the Catskills and the mid-Hudson Valley — will also likely be her running mate in the upcoming gubernatorial election in November.

Lacey Schwartz Delgado, a Black Jewish filmmaker, attorney and writer, is best known for her highly personal 2015 documentary, “Little White Lie.” The film explores how Delgado discovered a family secret — namely, that her father was African American — and how that challenged various identities, including her Jewish identity.

Schwartz Delgado, 45, was raised Jewish in upstate Woodstock, New York, by parents who told her that she had a darker complexion because of a Sicilian grandfather. At her bat mitzvah, as she recalls in her documentary, a congregant commented that it was “nice to have an Ethiopian Jew in our midst.”

Still, it wasn’t until she began college at Georgetown University that Schwartz Delgado began to question the family’s version. When the Black Student Alliance at Georgetown sent her a welcome letter based on a photo she had submitted during her college application, Schwartz Delgado confronted her mother, only to learn that mother had an affair, and a child, with a family friend who was Black.

The discovery forced Schwartz Delgado to reconcile her notions of what it meant to be Jewish — which, growing up, she said, she had always associated with being white. She went on to become the national outreach director and New York regional director of Be’chol Lashon, a California-based organization that promotes and educates on racial, ethnic, and cultural diversity in Jewish communities.

“There’s always this conversation about where the Black-Jewish dialogue is, but there are a bunch of us who are actually having those conversations internally and struggle to internally integrate those identities,” Schwartz Delgado told JTA in a 2018 interview.

“I think a lot of that is because society was almost telling us that being Black and Jewish was, at times, almost diametrically opposed — and, in fact, it’s not in reality,” she added. “So, for me, it was going through a process and truly an educational experience of learning the reality of who we are as a Jewish people, which is a diverse group of people, from very diverse backgrounds.”

These days, according to her website, Schwartz Delgado is a writer, director and producer at Truth Aid, an independent media company that produces content to effect social change.

Last year, Schwartz Delgado made a television special for the Black Entertainment Television channel titled “Content for Change: Black x Jewish.” The program, which featured prominent Black Jewish media personalities as well as clergy, explored the intersectionality of Black Jewish identity and the history of Black and Jewish communities coming together to promote inclusivity and social change.

Delgado, who was born in Schenectady, New York, and Delgado Schwartz met at Harvard Law School. They have been married since 2011 and currently reside in Rhinebeck, New York. They are the parents of identical twins, Maxwell and Coltrane, who were born in 2013. “We have very much embraced passing down Judaism to our kids,” Schwartz Delgado told JTA.

During his congressional campaign in 2018, Delgado spoke on Israel, saying that, because of Israeli settlements in the West Bank, “Israel is not a Jewish democracy” — unless it reaches a peace settlement with Palestinians and pursues a two-state solution. He later visited Israel in 2019 on a delegation led by then House Majority Leader Steny Hoyer.

“We’re making sure that we remain committed to the ideals that we believe in, and support for Israel is a big one of them, for both of us as a Jewish family,” Schwartz Delgado told JTA at the time.