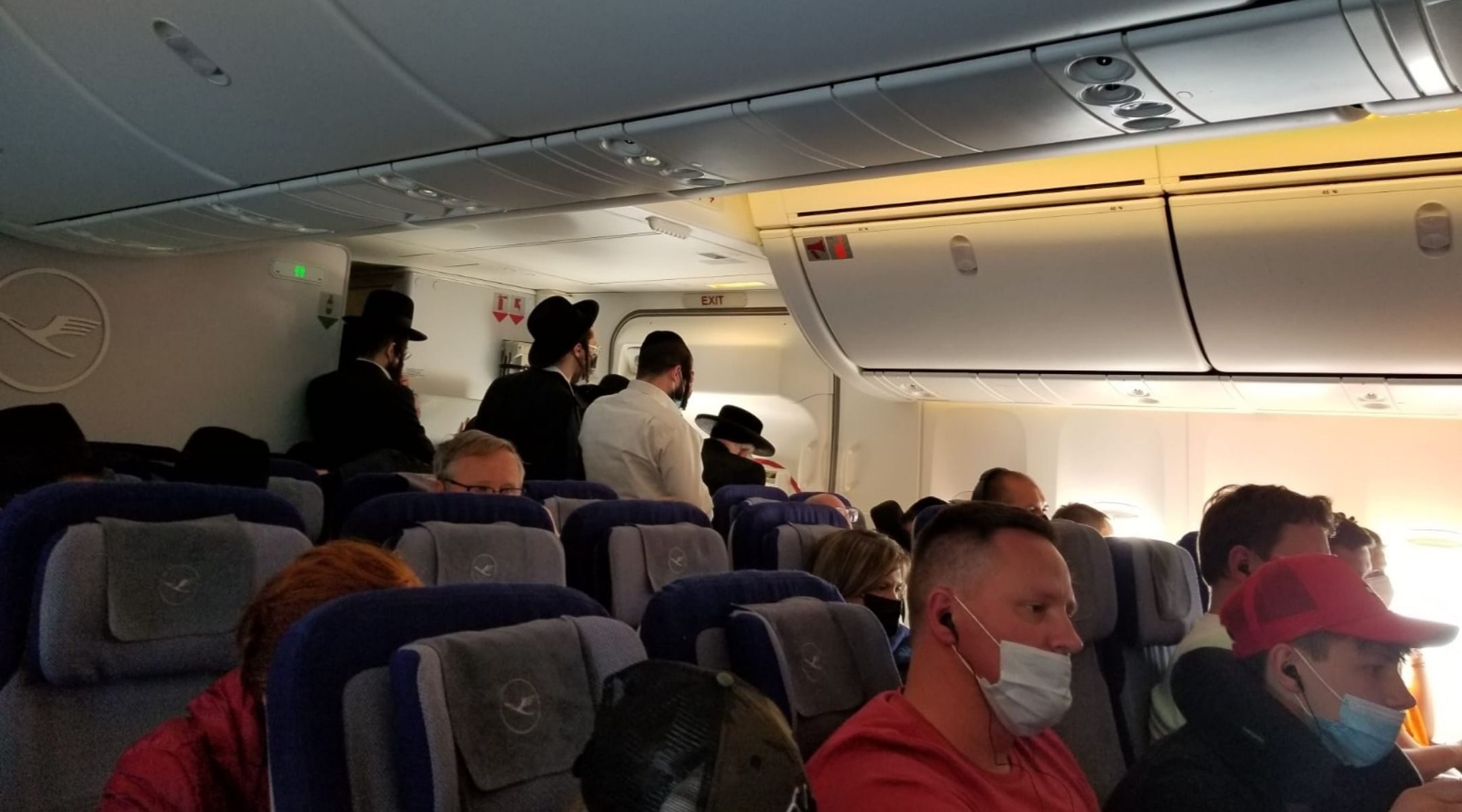 Inside the Lufthansa flight to Frankfurt, Orthodox Jewish men pray in the back of the plane. (Courtesy)
Advertisement

(New York Jewish Week) — Lufthansa apologized for kicking identifiably Jewish people off a flight from New York City to Budapest last week after some Hasidic individuals on the plane had reportedly not worn masks on the first leg of the flight.

Lufthansa said in a statement Tuesday that it “regrets the circumstances surrounding the decision to exclude the affected passengers from the flight.”

The statement also said that the airline was still reviewing the incident and regretted that “the large group was denied boarding rather than limiting it to the non-compliant guests.”

What Lufthansa referred to as a “group” were 100-plus Hasidic Jews, many of whom did not know one another, flying to Hungary on a pilgrimage.

Lufthansa also apologized “not only for the inconvenience, but also for the offense caused and personal impact.”

The statement said that the German carrier has a “zero tolerance” policy for racism, antisemitism and discrimination of any kind. “What transpired is not consistent with Lufthansa’s policies or values,” the statement said. “We will be engaging with the affected passengers to better understand their concerns and openly discuss how we may improve our customer service.”

Lufthansa regrets the circumstances surrounding the decision to exclude passengers from flight LH 1334 on May 4. Lufthansa sincerely apologizes. Please find our statement below: pic.twitter.com/yGXoD62QY1

In a video taken by a passenger, a Lufthansa supervisor in Frankfurt, Germany, where the first leg of the trip terminated, is seen explaining the expulsion by saying that “everyone has to pay for a couple,” adding, “It’s Jews coming from JFK. Jewish people who were the mess, who made the problems.”

The video, first reported and shared by the discount travel website Dan’s Deals, was posted to YouTube and Instagram, where it sparked angry comparisons to the treatment of Jews during the Holocaust.

The Jewish travelers on their way to Budapest to visit the grave of Rabbi Yeshayah Steiner, a wonder-working rabbi who died in 1925 and is buried in a village in northeast Hungary. According to Dan’s Deals, an estimated 135 to 170 Jews were on the flight, 80 percent of whom wore visible Hasidic clothing.

Rabbi David Zwiebel of Agudath Israel of America, which represents haredi Orthodox interests, wrote a letter to Lufthansa CEO Carsten Spohr on Monday asking that he research the “disturbing accounts” about the flight.

“People were being punished simply because they shared ethnicity and religion with the alleged rule violators,” Zwiebel wrote.

Lufthansa did not respond to the New York Jewish Week’s request for comment.