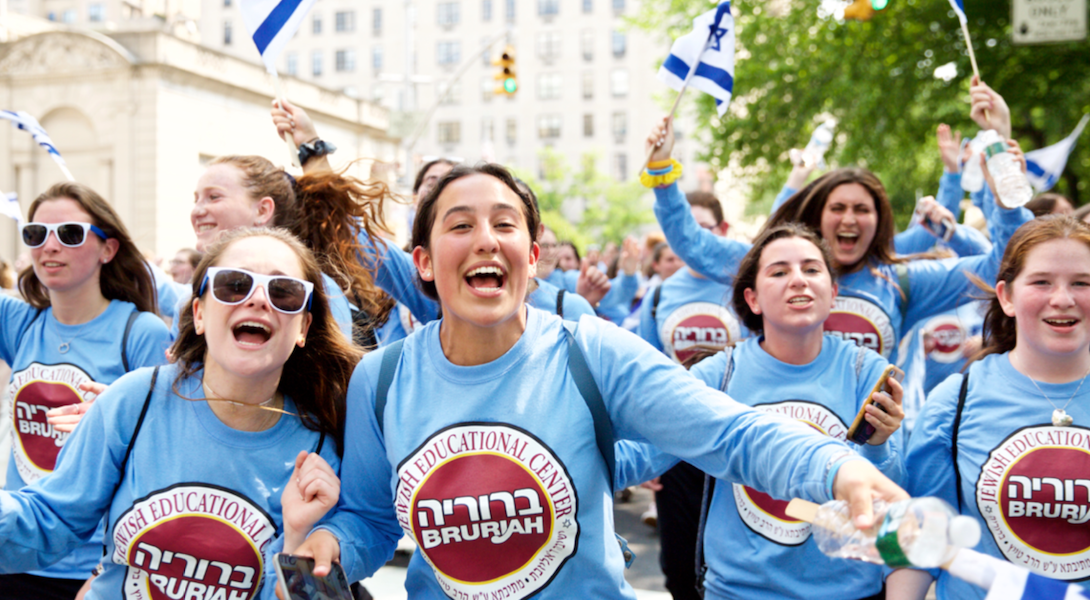 A delegation from the Bruriah High School for Girls marches in the 2019 Celebrate Israel Parade in Manhattan, June 2, 2022. (Courtesy JCRC-NY)
Advertisement

In their messaging and an oped signed by five prominent rabbis from the three major denominations, the Jewish Community Relations Council of New York, which has run the parade since 2011, is hoping for an event that reflects a wider swath of pro-Israel New Yorkers than in years past.

“We encourage people from all different movements, different political perspectives and different parts of the Jewish community to come together on this day and put aside divisions and say that we are united in support of Israel,” said Gideon Taylor, executive vice president and CEO of the New York JCRC.

The push is in part a response to criticism that an event that once represented a broad cross-section of New York’s synagogues, Jewish institutions and schools has, in more recent years, drawn delegations largely from Jewish day schools, most of them Orthodox, and professional pro-Israel groups.

Howard Pollack, the parade’s director, said the effort has paid off.

“There will be more than 200 groups marching this year, including groups that have never marched before and that are coming from all over the Jewish spectrum,” he said, adding that several Black churches in Brooklyn, along with some Jewish groups, will be marching for the first time.

“The parade will show the incredible beauty and diversity of the New York Jewish community,” Taylor said. “Jewish day schools, Holocaust survivors, Jewish war veterans and Jewish youth organizations are all coming together to say we are back and coming together as a community.”

Among the Jewish groups marching is Romemu, a Jewish progressive egalitarian community founded on the Upper West Side by Rabbi David Ingber in 2006.

“In light of what has been happening in Israel in the last couple of months, it is important for us to show solidarity with the people of Israel and to express our pride in being privileged to have a State of Israel,” Ingber said, referring to a string of deadly attacks in Israeli cities. 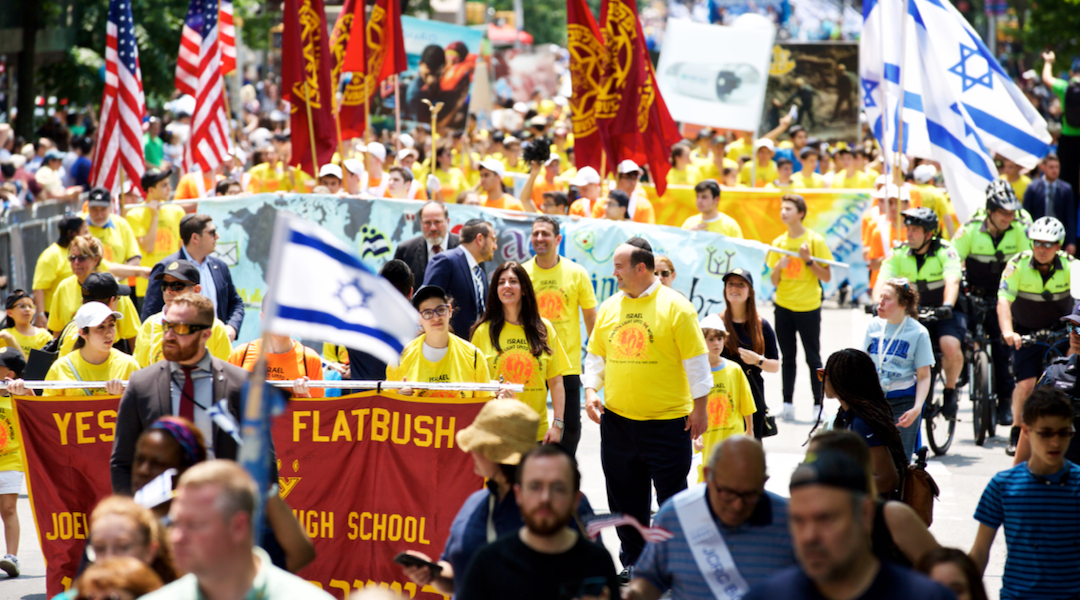 A delegation from Yeshivah of Flatbush marches on Fifth Avenue in the Celebrate Israel Parade, June 2, 2019. (Courtesy JCRC-NY)

Also marching will be members of New York Jewish Agenda, a progressive advocacy group founded in 2020.

Matt Nosanchuk, president of NYJA and a former resident of Washington, D.C., said it will be his first time marching in the parade. His organization will be displaying its banner and marching with a contingent from the Upper West Side.

“As an organization we are supportive of Israel and of a just, negotiated resolution of the conflict, as well as an end of the occupation,” Nosanchuk said. “There is complexity surrounding the parade and having this be an inclusive parade [for those with all political views] opens it to all who want to express solidarity with Israel. I commend the parade organizers for wanting to be inclusive and doing outreach to all. They made a genuine effort to do that and I appreciate it.”

Some 40,000 marchers are expected at the parade, which has been called the world’s largest expression of solidarity with the Jewish state outside of Israel and has been held since 1965. This year’s theme is “Together Again.” The parade is usually held the first Sunday in June, but it was pushed back one week in order not to conflict with the Jewish holiday of Shavuot, which begins this year on the evening of Saturday, June 4.

The rabbis’ oped about the parade alludes to the political and religious divisions that often play out in the American Jewish conversation about Israel.

“Events like this bridge the divide between us,” the rabbis write. “It’s a chance for us to gather as Jews and walk arm in arm, showing the world that our community stands together as one — united in our present, our future and our past.”

There will be 23 floats this year, 13 bands, three dance troupes, six trucks displaying billboards from such groups as #EndJewHatred, as well as a host of political leaders, including Gov. Kathy Hochul and New York City Mayor Eric Adams. There will also be a contingent from the Israeli government. The grand marshall is Harley Lippman, CEO of the outsourcing firm Genesis10 and a booster of the cooperation agreements between Israel and several of its Arab neighbors.

The marchers will include Simha and Leah Goldin, whose son, Hadar, an Israeli soldier, was shot and dragged into a tunnel by Hamas gunmen during the 2014 Gaza War. They will be marching to draw attention to the fact that Hamas refuses to release his remains to Israel.

The parade does set parameters for marchers, with rules saying all groups must “identify with Israel as a Jewish and democratic state and recognize Israel as the homeland of the Jewish People,” and “must oppose, not fund, nor advocate for the global Boycott, Divest and Sanction (BDS) movement against Israel.”

That would exclude groups on the left who support BDS or consider themselves anti-Zionist, and haredi Orthodox movements who are theologically opposed to a political Jewish state. A contingent from Neturei Karta, an extremist anti-Zionist haredi Orthodox group, frequently pickets the parade and joins the pro-Palestinian protesters who often show up along the route.

Taylor also noted the parade would serve as a counter to reports of an unprecedented increase in antisemitic incidents in the past year.

Perlmutter said that despite those incidents, the parade is a way to demonstrate that “we are not going to hide, but rather be proud of who we are and that we want to celebrate Israel and the Jewish community. Unfortunately, hate is alive and well in our state, county and the world. That being said, we must stand up to it and when there is reason to celebrate, we must. We are looking forward to being back on Fifth Avenue this year.”