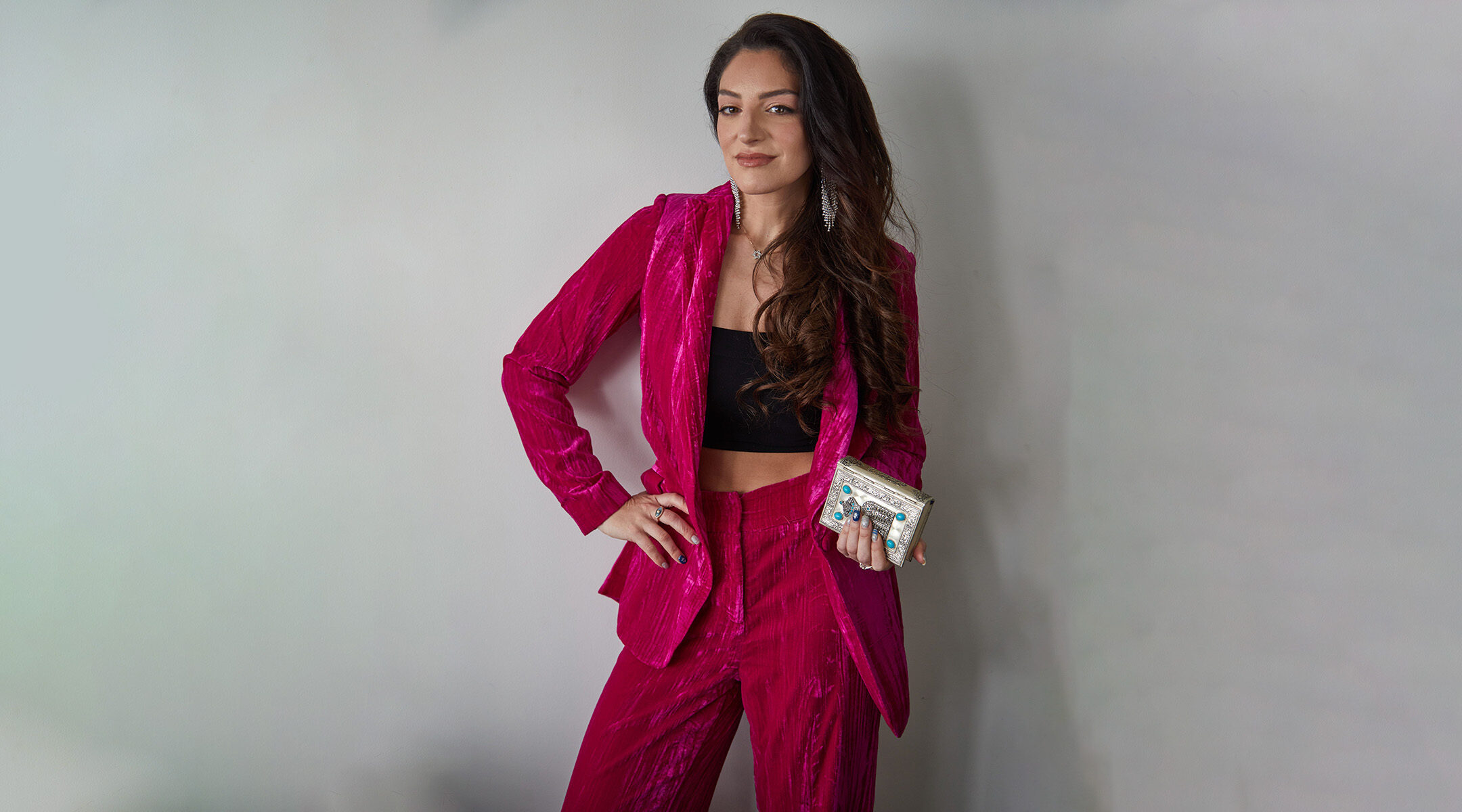 Eisenstadt is a non-denominational Rabbi, and while she keeps Kosher, she describes her observance as "hipsterdox." (Alex Korolkovas)
Advertisement

(New York Jewish Week) – Rabbi Rebecca Keren Eisenstadt lives in a one-bedroom apartment on Second Avenue on the Upper East Side, but she feels just as at home in the penthouses just a few blocks away on Park Avenue.

Most afternoons, Eisenstadt and her shih-poo, Scout, can be found shuttling between the Upper East Side homes of her 40 tween students — or “Jewdents,” as she calls them — as they prepare for their bar or bat mitzvahs. On the weekends, you might spot her on social media, where she goes by @myhotrabbi and frequently posts selfies from her client’s lavish parties. And soon, she hopes, you’ll find her on TV, thanks to Reese Witherspoon’s media company, which is making a documentary series about her life as a single rabbi looking for love.

One place Eisenstadt can’t usually be found is at a synagogue. And that’s by design. Eisenstadt — known as “Rabbi Becky” to most — is building a brand for herself based on the fact that many Jews feel disconnected from, or left behind by, the traditional centerpiece of American Judaism.

Instead of a pulpit, Eisenstadt is a private rabbi-for-hire for dozens of New York City families, mostly on the affluent Upper East Side. Her clients are the types of people who are used to having things done their way, on their own time —  and that’s true even when it comes to Jewish learning and lifecycle events.

“Especially with successful New Yorkers, they feel like they own the city,” Eisenstadt said. “They don’t want to feel like they’re a number on a waitlist.” 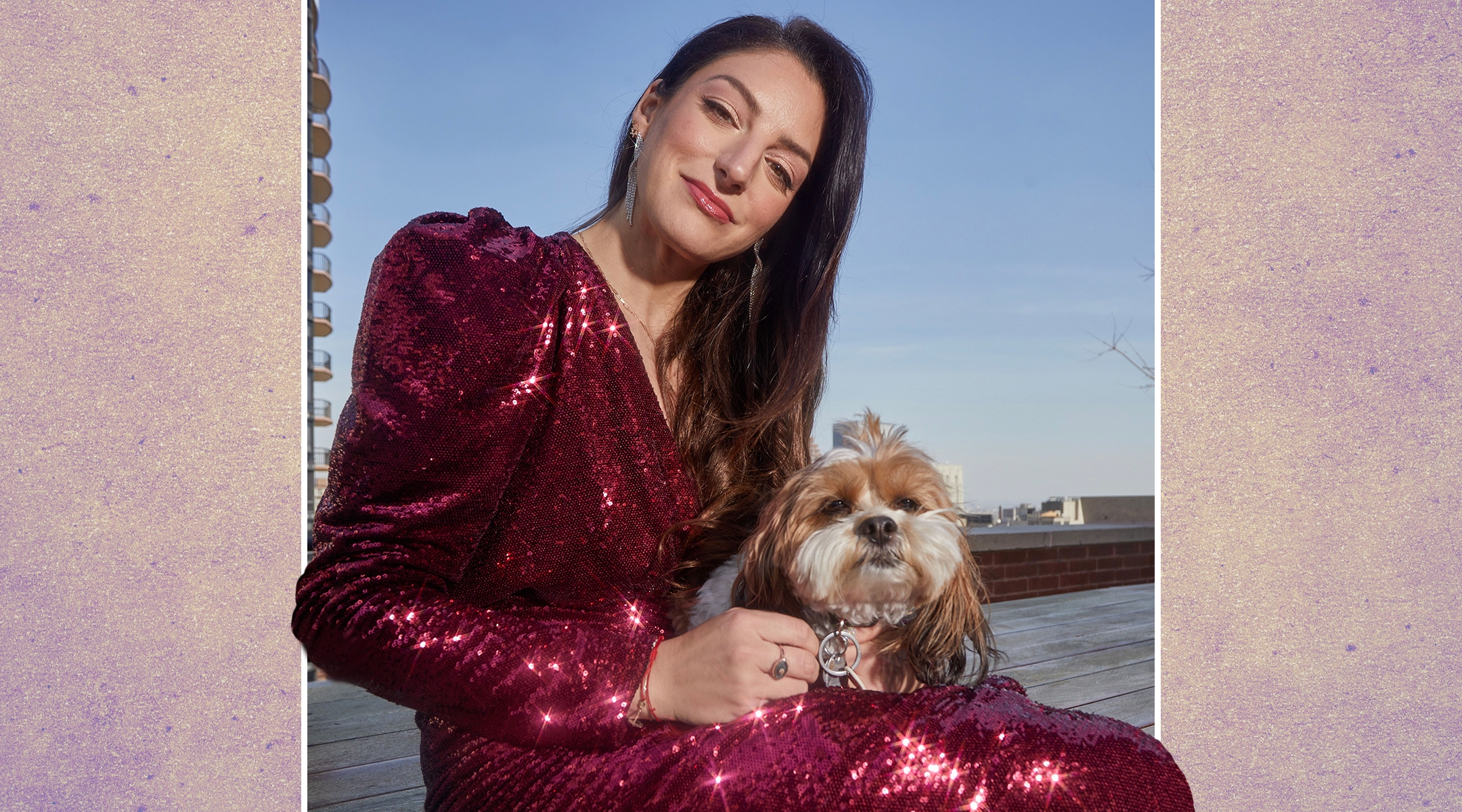 Eisenstadt uses social media to connect with her students and stay on top of their personal lives, often featuring and celebrating them on her account @myhotrabbi or her dog’s account @barkmitzvahtutor. (Alex Korolkovas)

If synagogues are mass transit, Eisenstadt is Uber: Her services are bespoke, personalized and on-demand. She customizes her clients’ prayer books, tailors their bar or bat mitzvah services and plans families’ trips to Israel. She’s overseen a spiritual ceremonies at the Western Wall in Jerusalem — and also an over-the-top party at Brooklyn’s Barclays Center where rapper Pitbull performed.

“Becky is basically a legend,” said Erica Copulsky, who hired Eisenstadt to help both her children prepare for Jewish coming-of-age ceremonies. They first met in 2018, when the Copulskys hired Eisenstadt to supplement the instruction their son got at Temple Emanu-El before his bar mitzvah.

Temple Emanu-El  “is probably one of the most beautiful synagogues in the world. It’s gorgeous. Beautiful flowers, beautiful music, beautiful everything. But it’s a huge room. It’s overwhelming. No matter how many friends you have, there’s no warmth — that’s just not what it is,” Copulsky said. Though everything at her son’s bar mitzvah went smoothly, Copulsky still felt like Eisenstadt, the external tutor, was the only person who really guided and got to know her son during the process.

When it came time for her daughter to become a bat mitzvah last year, the family no longer belonged to a synagogue — like so many other New Yorkers, they had relocated to Florida during the pandemic. So Copulsky turned to Eisenstadt, who tutored her daughter via Zoom and flew down to lead the ceremony.

It’s a role that Eisenstadt embraces. “Synagogues, in some cases, have become stale,” Eisenstadt said about the demand for her services. “Just because you get some glass windows and do a modern renovation, if you’re not totally renovating and keeping up and have your finger on the pulse of what’s going on with your constituents, then you’re going to lose touch.”

She’s tutored bar mitzvah students for more than half her life, starting as a teenager in Maryland and continuing through her college years at New York University and as side gigs as she worked in theater, education and at SoulCycle. Now 36 and recently ordained as a rabbi by Mesifta Adas Wolkowsik, a nondenominational seminary for working Jewish professionals, Eisenstadt says she understands what many New York City families want as their children prepare to mark a major Jewish milestone. 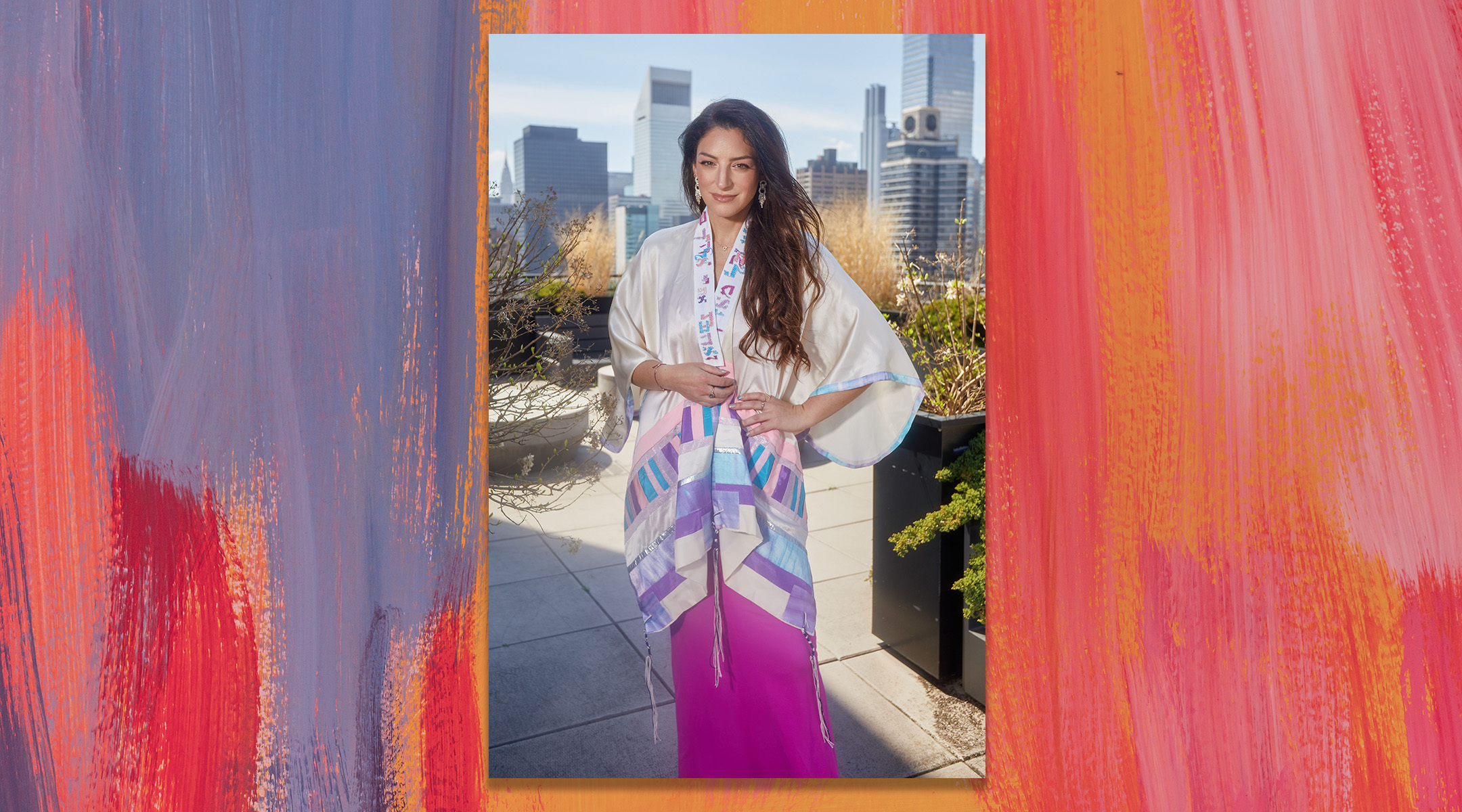 Rabbi Becky Eisenstadt has prepared and led bar and bat mitzvahs for some 700 families. “They don’t want to feel like they’re a number on a waitlist,” she said of her clients. (Image by Alex Korolkovas. Design by Mollie Suss)

All together, she’s had more than 700 clients to date. And though she notes that the demand for her services gives her the ability to charge rates “comparable to a young lawyer,” Eisenstadt says her tutoring is far more than a business transaction.

“It’s my superpower to become my client’s friends — or big sisters, or little sisters,” she said. “I’m not just there for an hour. It’s not just a transaction. It’s not just the High Holidays. It’s not even just Shabbat. I integrate myself into people’s lives and try to show how Judaism is integrated into their lives.”

Eisenstadt’s own relationship with Judaism has added some complication in her life. She said she has found it nearly impossible to find people to date who are as religiously observant — Eisenstadt keeps kosher and identifies as “hipsterdox,” a loose Modern Orthodox — and dedicated to Judaism as she is, while also being comfortable with her career as a non-denominational rabbi.

That struggle will be a focus of the series being made about her life. The production company has filmed a pilot and is currently trying to find a network to host the show, which will chronicle Eisenstadt looking for love and “succeeding as a young, single woman in a man’s world,” as she puts it. As she guides tweens and their families on spiritual journeys, she also goes on dates, gets her hair blown out and glams up for her clients’ events.

But beyond the glitz and glamor, Eisenstadt’s work reflects a serious trend in American Judaism: the shifting of a center of gravity from communal institutions to individual experiences. Even before the pandemic, the majority of American Jews seldom or never set foot inside synagogues, according to the 2020 Pew study — but more than half of those people said they expressed their Judaism in other ways, including through life cycle events.

The pandemic, which normalized at-home bar and bat mitzvahs and closed synagogue doors, seems only to have hastened the shift. The most widely-viewed recent depiction of a bar or bat mitzvah in pop culture, on the “Sex and the City” reboot “And Just Like That,” showed a ceremony that took place entirely outside the confines of a synagogue. (“Horrific,” Eisenstadt said of the episode, which she thought watered down the potential powerful Jewishness of the ceremony. “Everything about it made me cringe.”)

Some are skeptical of the trend, arguing that Jews who go it alone are missing out on a crucial dimension of what it means to be Jewish.

“Becoming b’nai mitzvah is an extraordinary moment of personal achievement for each child and family. It is also an extraordinary moment of celebration for the larger Jewish community in which the Jewish community wants to share,” said Emanu-El’s senior rabbi, Joshua Davidson. “If the celebration is to become more than one moment in time, but rather the beginning of a strengthening connection to Jewish life, the synagogue is a meaningful place to mark it.”

Others are leaning into the shift. At the Marlene Meyerson JCC Manhattan, Rabbi Lori Forman-Jacobi developed the “Jewish Journeys off the Bimah” program, now in its 10th year. In the two-year program — which costs $10,000 — groups of five to seven students learn their Torah portion in English together, prepare a dvar Torah (a sermon) and create a project based on what they learned.

“We wanted to create an alternative kind of Jewish educational experience for families who wanted to have a community-based education but not necessarily in a synagogue setting,” Forman-Jacobi said. “Many of Manhattan’s Jewish families are not looking for synagogue membership, but still want to mark the occasion.” 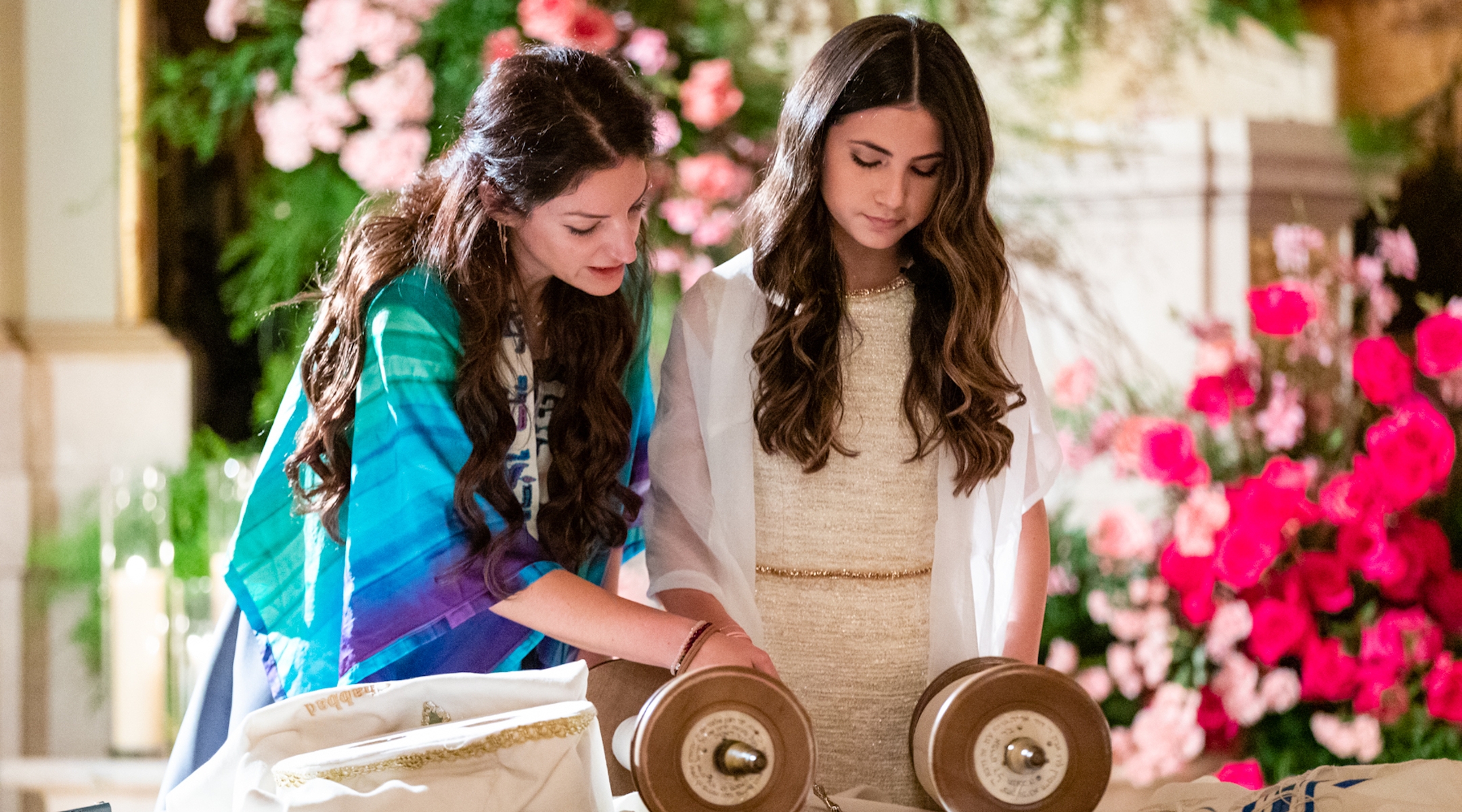 Eisenstadt wants to be clear that she loves synagogue life. “I love every shul I ever walked into. I feel like it’s a home,” she said. She belongs to the Carlebach Shul, an Orthodox congregation on the Upper West Side.

But she said the role she has crafted is needed, especially for children who may not fit into the traditional Hebrew school model for one reason or another. “The institutional Hebrew school learning model is really only geared toward average learning and average attendance, and that doesn’t really fit for somebody who has some form of difference,” she said. About half of her clients are children of divorced parents who may not be able to consistently show up to the same location each week. Many of her students have a learning disability, she added, which Hebrew schools are not always set up to accommodate.

As rewarding as she finds her work, without an administrator, cantor or any other colleague to fall back on, the freelance life can be exhausting and lonely. And without a congregation of her own, it can also be difficult to recreate for her students the community feeling one finds in synagogues on holidays, during celebrations and in times of sorrow.

Eisenstadt tries to combat that by inviting her students’ friends and siblings to join in their lessons.

One recent evening, Eisenstadt invited three of her students to join her at a fundraiser event for the American Friends of the Israeli Navy. The students were thrilled to hang with their rabbi at a Thursday-night soiree at an event space in Midtown Manhattan. Eisenstadt’s “Jewdents” may have been the youngest attendees by decades, but with their Prada bags they fit in perfectly.

“Maybe it means I’m an enabler of that sense of entitlement, but it’s the world I’m working in,” Eisenstadt said of her high-end clientele. “I’m the one who’s bringing people to the Jewish experience … teaching people how to pray, and facilitating prayer, of learning the texts, relating it to modern day and ushering people through holidays and lifecycle moments.”