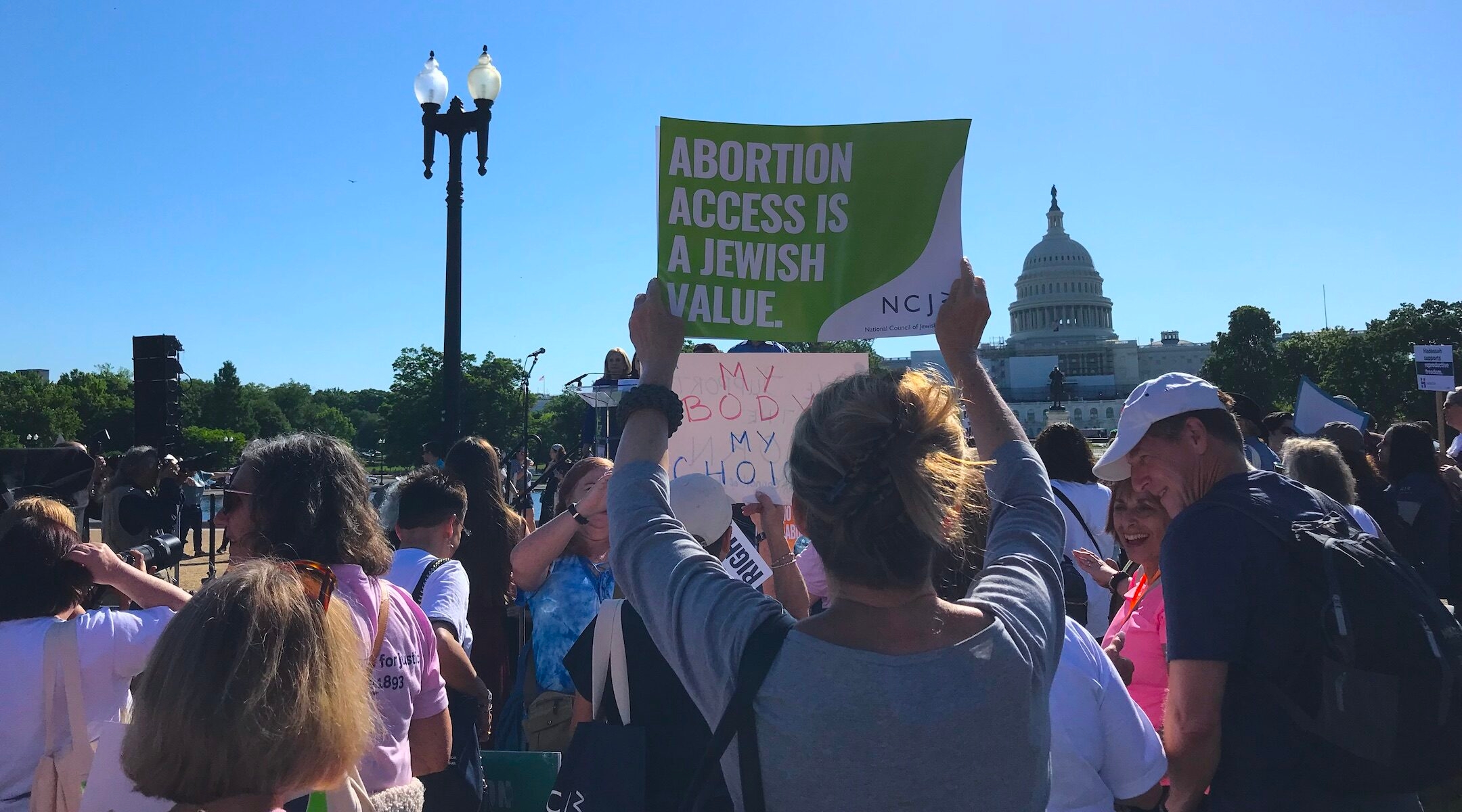 A protester holds up a sign reading "Abortion Access is a Jewish Value" at a rally in front of the US Capitol Building organized by the National Council for Jewish Women, May 17, 2022. (Julia Gergely)
Advertisement

WASHINGTON (JTA) — As it was originally conceived over the last year, the Jewish Rally for Abortion Justice was meant to be a powerful closing ceremony for the National Council of Jewish Women’s annual Washington Institute conference. A few hundred attendees were expected.

That all changed earlier this month, when Politico leaked a draft of a Supreme Court decision that would overturn Roe v. Wade, the landmark 1973 Supreme Court case that protected and federally legalized access to abortion.

Instead of a standard end-of-conference gathering, the crowd Tuesday morning on the National Mall, near the Capitol, swelled to more than a thousand Jews from New York, Washington, Chicago and across the country, and even Israel, who used the rally as an outlet to express their outrage and find intersectional solidarity in their Jewish community. 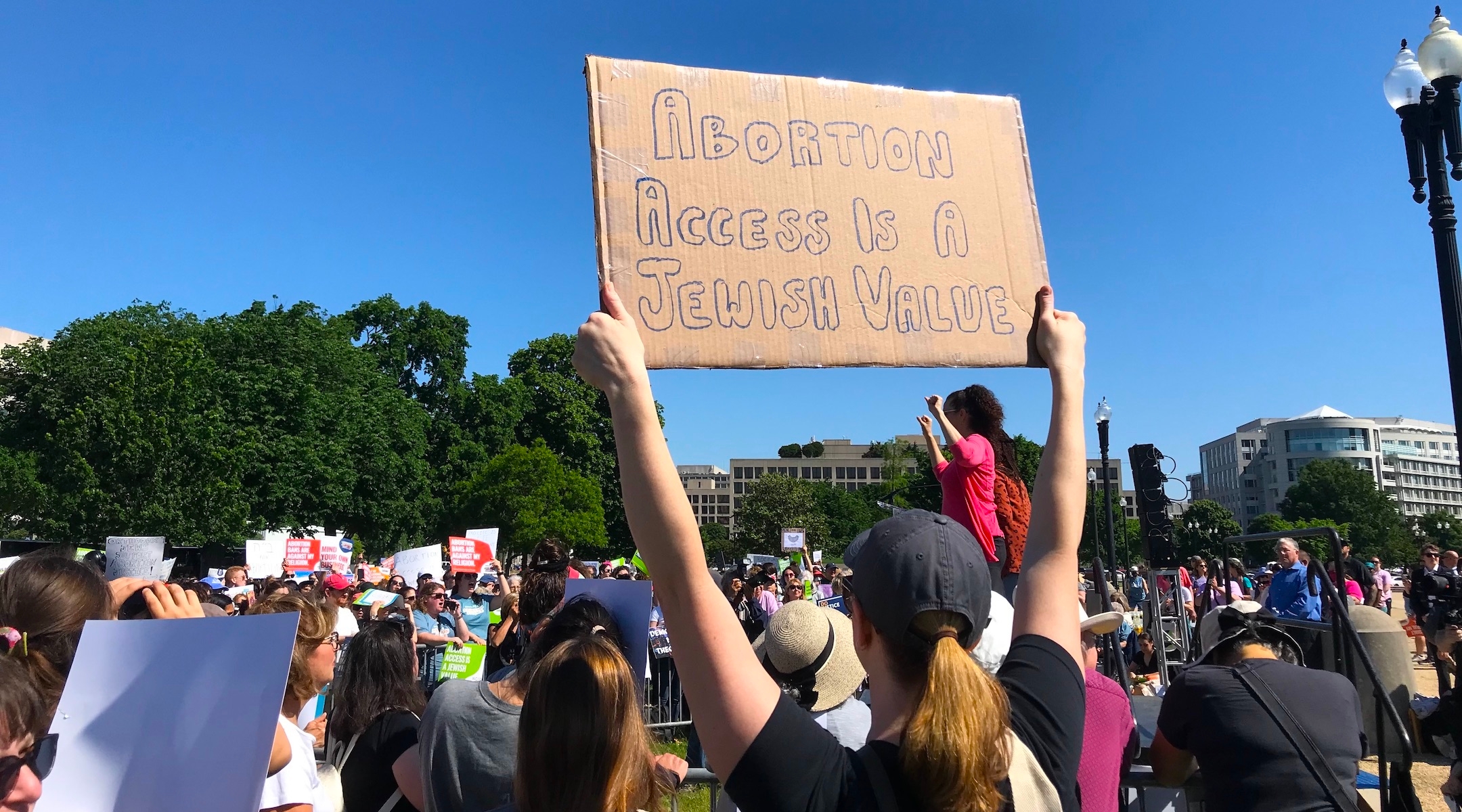 A protester holds a handwritten sign at the Jewish Rally for Abortion Justice on Tuesday, May 17, 2022. (Julia Gergely)

“Fighting for women’s rights has been a part of my Jewish activism my whole life,” said Laura Weil, a member of the crowd who came to the rally with her Virginia synagogue. “I came to guarantee rights for my 1-year old granddaughter and for her mother, my daughter, to be able to decide if and when she’ll continue to grow her family.”

Polls show that American Jews favor abortion rights more than any other religious group, although Orthodox groups tend to favor more restrictions on abortion than the liberal Jewish majority.

Sheila Katz, the CEO of the National Council of Jewish Women and organizer of the rally, told JTA she had expected, or suspected, the Supreme Court’s draft ruling for some time. “But seeing it in the writing, and seeing the complete disregard for women and people who can get pregnant, was just devastating,” she said.

She added that the decision to overturn Roe v. Wade is “not only just a deeply Jewish issue, but also a religious freedom issue.”

With the rally’s 9 a.m. start time, buses from synagogues and Jewish organizations in New York and New Jersey departed the Tri-State area at 4 a.m., the massive full moon still hanging over the city. This reporter hopped on a bus with a group of seven from Temple Emanu-El, including Senior Rabbi Joshua Davidson, Rabbi Sara Sapadin and Cantor Sara Anderson. “I only set two alarms a year — for Rosh Hashanah and Yom Kippur. But today I had to set an alarm,” Davidson joked as the bus pulled away from East 65th Street. “We’re all here for a number of different reasons, but we all recognize our voices cannot be heard if they are not lifted, and what we’re doing today is so important.”

For Alison Bell, a member of Temple Emanu-El group, the decision to attend the rally was a no-brainer, despite the early departure time. “If we say we’re pro-choice and we’re not standing up and showing up for this, then what do we stand for?” she said. “This is what is important to stand up for over everything going on in my life — for me and for my daughter.”

Once at the rally, the mood was energetic, with lots of hugs shared between old friends and acquaintances. While many in the crowd were happy to be surrounded by community, lots of women expressed shock and anger that they were continuing to rally for a woman’s right to an abortion — some for the second, third, or umpteenth time in their lives.

“Being pro-choice was the first political issue I remember feeling a side for, when I was maybe 12 years old,” said Lisa Mackem, who came from Virginia with Temple Rodef Shalom.

Mackem recalled standing in the same spot rallying for abortion rights when she was in college in 1989. “I can’t believe we’re still here, protesting the same thing. It’s scary that we’ve gone backward while trying to move forward this whole time,” she said. 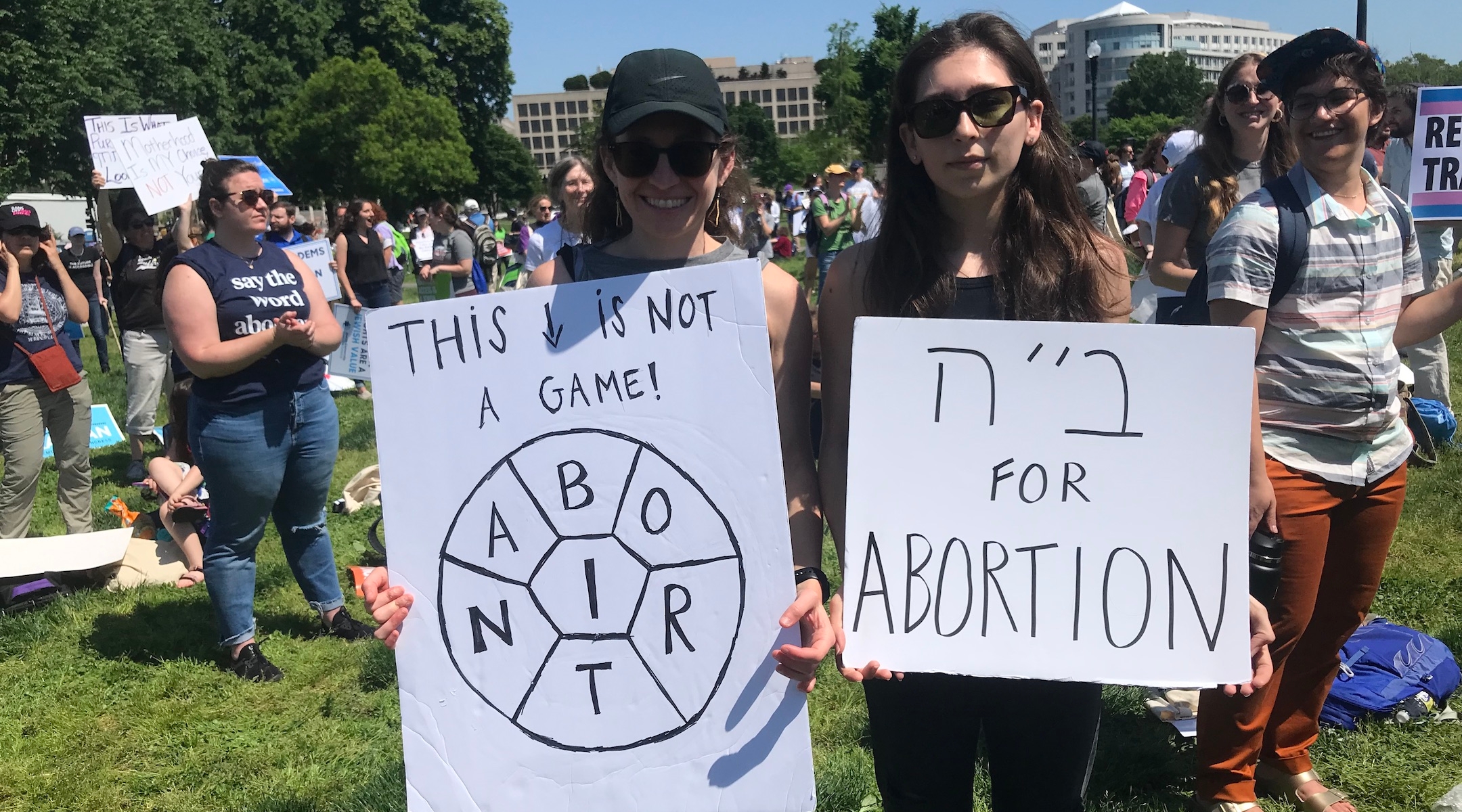 Members of the crowd holding signs that read “This is not a game,” and “B”H (Thank God) for Abortion” at a pro-abortion rights rally organized by the National Council of Jewish Women in Washington, DC, May 17, 2022. (Julia Gergely)

Homemade signs invoked the memory of late Jewish Supreme Court Justice Ruth Bader Ginsburg, a pioneer in women’s rights, and emphasized the idea that access to abortion is consistent with Jewish belief, which was a major theme reiterated by several of the speakers.

“Judaism permits abortion and requires it when the life of a pregnant person is at risk,” Katz said on stage. “Religious freedom is meant to be a shield to protect people of minority faith communities, not a sword to discriminate against us. The only way we can truly have religious freedom in this country is if every person can make their own decisions for their body, their life and their future.”

The rally was originally slated to be held on the steps of the Supreme Court, where, in past years, NCJW lobbied members of Congress on women’s and children’s social justice issues. This year, because of newly placed barricades on the steps of the Supreme Court, the rally was moved to a lawn on the National Mall, Katz told JTA. Though organized by NCJW, the rally was co-sponsored by more than 150 Jewish synagogues and organizations.

Another of the rally’s main goals was to emphasize how diverse the support for abortion access is, highlighting both interdenominational and interfaith solidarity on abortion rights. Rabbis from every major denomination of Judaism spoke on stage, all part of NCJW’s “Rabbis for Repro” initiative, a group of American clergy who have pledged to speak up for reproductive justice within their congregations.

“Halacha [Jewish law] believes that life does not begin at conception,” said Rabbi Dov Linzer, the head of Yeshivat Chovevei Torah in the Bronx. “In some cases, it is your religious duty to have an abortion. [Guaranteeing abortion access] is an issue of religious freedom.”

The same sentiments were expressed on stage by several rabbis, as well as Christian clergy members. “Erased is my freedom to act in accordance with my religious beliefs,” said Rabbi Deborah Waxman, the president of the Reconstructionist movement.

Katz said the religious freedom issue was precisely why a Jewish-oriented rally was necessary, even as large, secular rallies and marches were held across the country over the weekend. “For too long, a small but loud group from the religious right has claimed the narrative on faith and abortion,” she told JTA. “That narrative is simply not true. For too long, Jews have been ignored as part of the conversation, and the only way we can counter a faith narrative is with a faith narrative.” 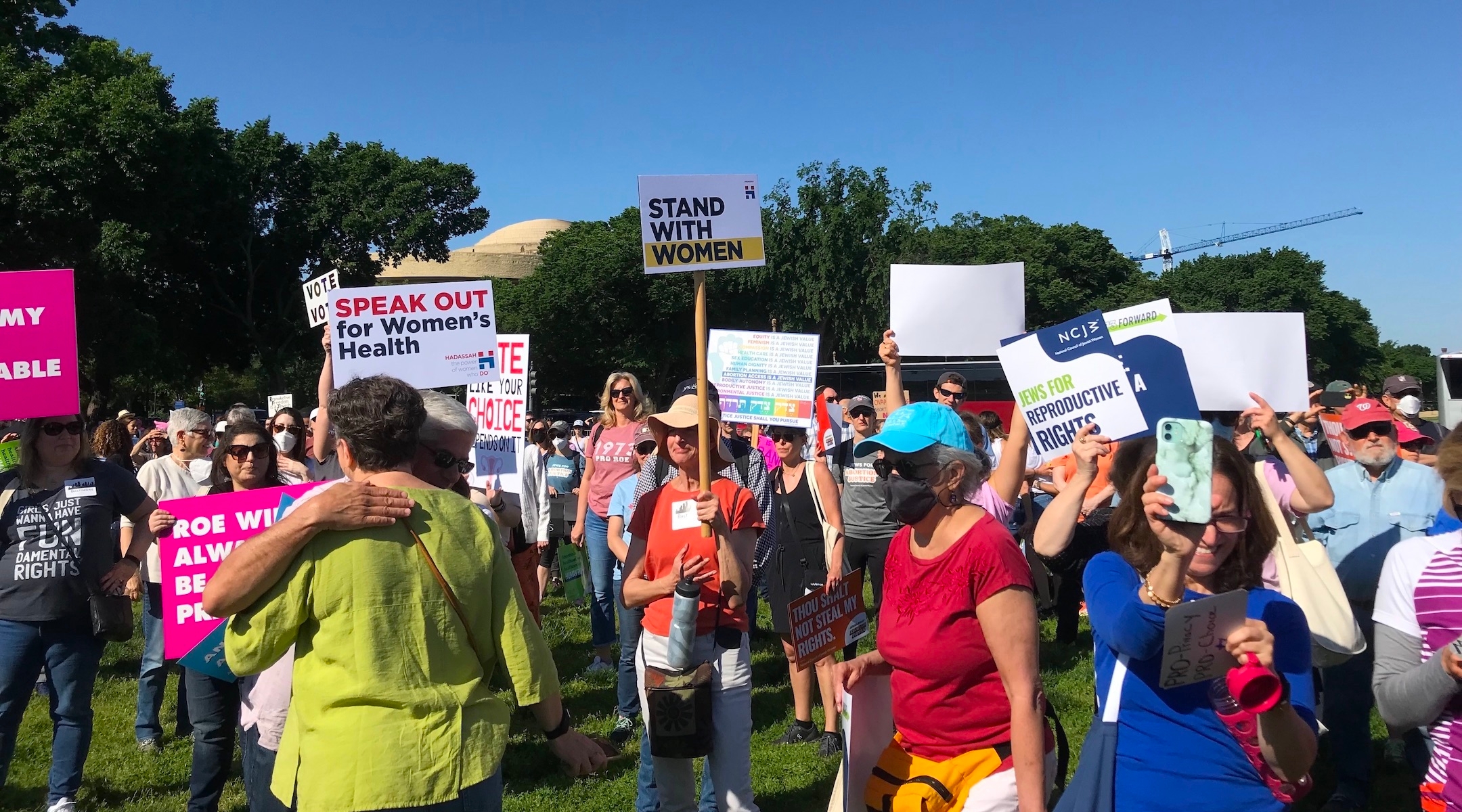 More than a thousand people attended a Jewish rally for abortion rights on the National Mall, expressing frustration as the Supreme Court appeared poised to overturn Roe. V. Wade, May 17, 2022. (Julia Gergely)

“We don’t live in a right-wing Christian theocracy — we live in a secular, liberal democracy,” Levin said. “If my granddaughter cannot have the same rights that her mother and grandmother had, that is wrong.”

Another goal of the rally was to uplift diverse voices and marginalized communities that will be disproportionately affected by the court decision, an intentional shift in the NCJW’s advocacy. The organization announced the launch of the Jewish Fund for Abortion Access at their conference, which will fundraise for the National Abortion Federation to help people get abortions, fund lodging and transportation to cross state lines if needed. Following the march, Katz said the fund has already raised $10,000.

Though the rally’s numbers began to thin out after about two hours, perhaps deterred by the climbing temperatures, the final speaker, Heather Booth, drew loud applause from an emotional crowd. Booth, a civil rights and feminist activist, founded the Jane Collective in 1965, which helped provide 11,000 safe abortions in Illinois before it was legalized. “We are history-makers,” Booth said. “The fight for freedom is in our hands. If we organize, we will change this world,” she urged the crowd.

“This is going to be an all-hands-on-deck moment,” Katz said. “I hate to say it, but the other thing we have to do is accept that we lost… And if we’re going to win the next fight, in a long-term kind of way, it’s going to require more people to take this seriously.”